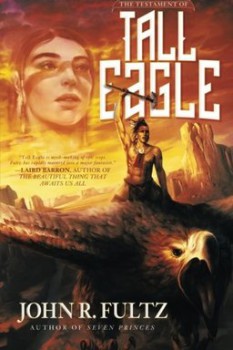 In his 1978 essay “On Thud and Blunder,” Poul Anderson pointed out that heroic fantasy was “overpast for drawing inspiration from other milieus — Oriental, Near Eastern, North and Black African, Amerindian, Polynesian.” While I’m still looking for Polynesian swords & sorcery, Black Gate alumnus John R. Fultz, has written the first full Native American novel of heroic fantasy that I’m aware of: The Testament of Tall Eagle (2015).

I must admit I’ve corresponded and debated with John several times about heroic fantasy. He’s as deeply conversant with the history of S&S as anybody I know. He brings that knowledge plus a deep love for the genre to his writing. I recommend his collection The Revelations of Zang as well as his Books of the Shaper trilogy — both are wildly inventive and fun. So I went into his new book expecting good things and I was not disappointed.

Fultz’s novel is a wonderful throwback to the golden days of swords & sorcery of the 1970s. In only 324 pages, Testament recounts the adventures of Tall Eagle, a young man of a Great Plains Indian tribe in the days just before the introduction of horses to his people. It’s possessed of a straightforward narrative that’s as lean and fierce as a wolf. Instead of the Clark Ashton Smith-like prose of his previous books, much of Testament reads like a brutally realistic historical saga of 17th century Plains Indian life… until the monsters show up. And they do, in great, slimy droves.

Testament begins with a young man setting out on the spirit trail. Son of Two Elks, of a tribe known to themselves as the People, hopes to encounter an eagle spirit but his trek takes a turn for the unsettling. There is more on the mountain than he expected: 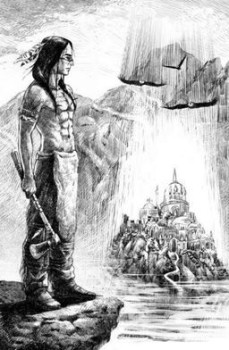 It seemed the mountaintop was aflame, yet I smelled no smoke. Then came the stench of something foul, something I could put no name to. It smelled vaguely like a snake’s flesh but far more unclean. A terrible cry fell from above, the moaning of a hundred dying elk, their voices joined as one. Yet there could be no elk this high. It was a sound that had never been heard in these mountains. I shrank back as a massive shadow glided down the mountainside some distance from me. I could not tell what it was. A black cloud, yet heavy as a pile of boulders, it seemed to crawl or slither into a deep ravine, dislodging rocks and shale in its wake.

Near a mysterious place of golden spires he encounters a strange warrior astride a giant eagle. The great bird grabs Son of Two Elks by his shoulders and brings him back down the mountain. He returns to his tribe, the only proof of his experience a white feather as long as his arm. The tribe’s wise man believes him and he is given the name Tall Eagle

Over the course of the summer, the time of plenty during the buffalo hunts is marred by the arrival of white traders from the east called the Aldoneq, who come selling metal weapons and guns. A short time after their arrival an attack by an enemy tribe, the Eenu, armed by the same white men, takes a terrible toll on Tall Eagle’s tribe. Brave men are cut down and children are stolen.

Incensed by the Eenu’s raid but unable to follow them into their lands, the warriors of the People decide to take out their anger on another old enemy, the Urkis. The Urkis have raided and killed the People in the past, so killing them for the sins of someone else makes perfect sense to Tall Eagle and his tribe. It is with the attack on the Urkis that Testament moves deep into the fantastic. Just before the warriors set out, Tall Eagle’s cousin, Rides the Wind, and his uncle reveal they found a bear skeleton stripped of all its flesh. During their attack on the Urkis the People find themselves up against an otherworldly horror, setting in motion events that will alter their existence completely.

“Help me, Rides the Wind! Sharp Tongue! Help me!” Bear Killer yelled at us from the top of the quivering mass. A cloud left the face of the moon, and I saw clearly now. A great mound of snow-white flesh rose before us. Like a vast centipede it crawled on dozens of segmented, pointed legs depending from its slug-like body. It was longer than eight horses standing nose-to-flank in a row. A great stinking worm. It had crawled into our camp and grabbed Bear Killer in its mouth. It raised its eyeless, featureless head toward the stars as it drew him deeper into its maw. 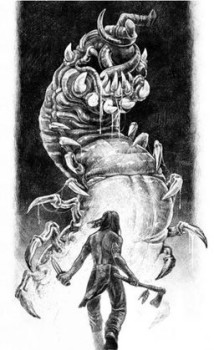 The fight with the worm triggers a series of events that leads to Tall Eagle losing the woman he loves, betraying his best friend, and exiling himself from the People in hopes of uncovering the mystery of the monsters and how to destroy them. His self-imposed quest takes him from the tepees of his nomadic tribe to a gilded city from another universe and into alliance with alien beings of great power. In the end they will present him with the chance to save his tribe if only he can convince them to trust him one more time.

Fultz writes with vigor and assurance, whether he’s depicting a bloody fight at close quarters or the debates around the council fire as the People try to discern the best path for their future. You can feel his love for and understanding of his characters and their world in every chapter and on every page.

Tall Eagle is the best “barbarian” character I’ve read in some time. He seems realistic, being neither a noble savage nor a bloodthirsty one. Instead, he is a man from a culture surviving in a world that’s physically dangerous and peopled with enemies poised to raid and kill when the chance arises. He is a man who can speak and act romantically toward the woman he loves and at the same time express incredulity when the white men’s priest speaks of peace:

The People had no interest in a life without war. How could a man be judged worthy without walking the warpath and collecting the scalps of his enemies? The Eskarari did not understand us at all.

Too many contemporary writers fall prey to applying contemporary standards to their characters. Fultz clearly has no time for that in this historical setting. Tall Eagle and the People and the tribes around them act in ways we consider barbaric. Prisoners are tortured to death to see how brave they are, their corpses blinded to render them blind in the afterlife. And despite that, unalloyed nobility in Tall Eagle, his bravery and responsibility for the People, make him a hero.

I called The Testament of Tall Eagle a throwback to the genre’s golden age in the 1970s, but its antecedents go back even further. Its roots lie with Manly Wade Wellman’s tales of the caveman, Hok, and Robert E. Howard’s “Spear and Fang.” I consider this a very good thing.

Now, if you’re a reader who only reads books with casts that rival the size of War and Peace’s, and come packaged with maps and glossaries, then this might not be a book for you. If you like concentrated adventure stories that don’t waste words or time on needless subplots and superfluities, then Testament might be right up your alley.

I am not usually a fan of fantasy set in historic settings or worlds that very obviously copy real world cultures with only minor adjustments. But other than that, it does indeed sound pretty interesting and promising.

Charles de Lint uses a lot of Native American (or First Nations) folklore in his contemporary fantasy.
As does John Conroe.
And Stephenie Meyer.

(Are we allowed to say positive things about the Twilight series here?)

I just read Fultz’s story “Chivaine” in Weirdbook 31. Really enjoyed the mythic qualities of that tale.

Out of curiosity, have there been many Sword and Sorcery tales focused on the Slavs or Magyars?

The Witcher takes place in a world strongly influenced by medieval Poland, but in practice it’s pretty “generic medieval” without noticable specifically slavic elements. Switch the names and it could have be just as well a French or British inspired world. By the time period it’s drawing from, the difference between Slavic and Germanic culture is not that big anymore.

@Martin – it’s a tough thing to mix the fantastic with the real, but John Fultz does indeed pull it off.

@NOLAbert – I haven’t bought Weirdbook yet but am looking forward to downloading a copy. I don’t know. The closest thing I’m aware of is CJ Cherryh’s Rusalka series set in medieval Russia.