I’m cheating a bit with these books, since technically they’re not all part of the same series. Also, the newest volume, The Edge of Worlds, won’t officially be released until April 5th — but Amazon and B&N.com both have copies in stock today, so let’s go with it.

Martha Wells’ tales of Gilead and Ilias were some of the most popular stories we ever published in Black Gate, and her Books of the Raksura trilogy captivated readers around the world. Her latest novel, The Edge of Worlds, expands her world of the Raksura with the start of a brand new series. That brings the total books set in the Three Worlds to four:

All four are published by Night Shade Books. Links will take you to our previous coverage.

Here’s the description for The Edge of Worlds.

An expedition of groundlings from the Empire of Kish have traveled through the Three Worlds to the Indigo Cloud court of the Raksura, shape-shifting creatures of flight that live in large family groups. The groundlings have found a sealed ancient city at the edge of the shallow seas, near the deeps of the impassable Ocean. They believe it to be the last home of their ancestors and ask for help getting inside. But the Raksura fear it was built by their own distant ancestors, the Forerunners, and the last sealed Forerunner city they encountered was a prison for an unstoppable evil.

Prior to the groundlings’ arrival, the Indigo Cloud court had been plagued by visions of a disaster that could destroy all the courts in the Reaches. Now, the court’s mentors believe the ancient city is connected to the foretold danger. A small group of warriors, including consort Moon, an orphan new to the colony and the Raksura’s idea of family, and sister queen Jade, agree to go with the groundling expedition to investigate. But the predatory Fell have found the city too, and in the race to keep the danger contained, the Raksura may be the ones who inadvertently release it.

The Edge of Worlds, from celebrated fantasy author Martha Wells, returns to the fascinating world of The Cloud Roads for the first book in a new series of strange lands, uncanny beings, dead cities, and ancient danger. 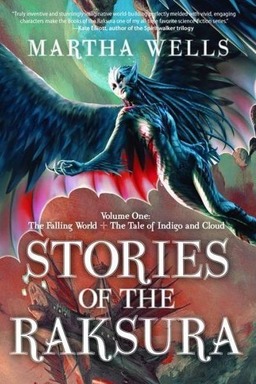 Read Martha’s complete Nebula-Award nominated novel The Death of the Necromancer right here at Black Gate, and her article on the Raksura series, How Well Does The Cloud Roads Fit as Sword and Sorcery? Our previous coverage of Martha includes:

If you’re looking for other complete series to enjoy, old and new, you can browse some of our series coverage from the past two months.

The Duelists Trilogy by Julia Knight
The Wave Trilogy, by Aidan Harte
The Silistra Quartet by Janet Morris
The Pendulum Trilogy by Will Elliott
The Half-Light City by M.J. Scott
The ‘Mancer Series by Ferrett Steinmetz
The Chronicle of the Unhewn Throne by Brian Staveley
The Finnbranch Trilogy by Paul Hazel
The Monstrumologist Series by Rick Yancey
The Ever-Expanding Universe Trilogy by Martin Leicht and Isla Neal
The Bloodsounder’s Arc Trilogy by Jeff Salyards
The Birthgrave Trilogy by Tanith Lee
The Society of Blood by Mark Morris
Pathfinder Tales: The Pirate’s Trilogy by Chris A. Jackson
The Fall of the Gas-Lit Empire by Rod Duncan
The Detainee Trilogy by Peter Liney

See all of our latest coverage of Series Fantasy here.