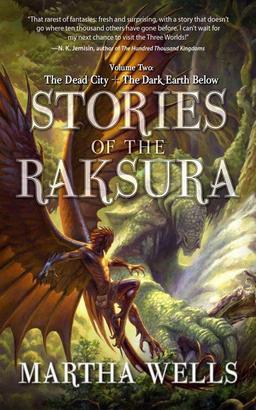 Martha Wells’s Books of the Raksura trilogy — The Cloud Roads, The Serpent Sea, and The Siren Depths — have captivated readers around the world. In Stories of the Raksura, Volume One: The Falling World & The Tale of Indigo and Cloud (details here), she returned to the world of Raksura with a pair of exciting novellas. With the second volume, Stories of the Raksura, Volume Two: The Dead City & The Dark Earth Below, now available from Night Shade Press, Moon, Jade, and other favorites from the Indigo Cloud Court return in two more powerful novellas in the same setting.

Martha Wells continues to enthusiastically ignore genre conventions in her exploration of the fascinating world of the Raksura. Her novellas and short stories contain all the elements fans have come to love from the Raksura books: courtly intrigue and politics, unfolding mysteries that reveal an increasingly strange wider world, and threats both mundane and magical.

“The Dead City” is a tale of Moon before he came to the Indigo Court. As Moon is fleeing the ruins of Saraseil, a groundling city destroyed by the Fell, he flies right into another potential disaster when a friendly caravanserai finds itself under attack by a strange force. In “The Dark Earth Below,” Moon and Jade face their biggest adventure yet; their first clutch. But even as Moon tries to prepare for impending fatherhood, members of the Kek village in the colony tree’s roots go missing, and searching for them only leads to more mysteries as the court is stalked by an unknown enemy.

Stories of Moon and the shape changers of Raksura have delighted readers for years. This world is a dangerous place full of strange mysteries, where the future can never be taken for granted and must always be fought for with wits and ingenuity, and often tooth and claw. With these two new novellas, Martha Wells shows that the world of the Raksura has many more stories to tell…

The book also includes the short stories “Trading Lesson,” “Mimesis,” and “The Almost Last Voyage of the Wind-ship Escarpment.” Stories of the Raksura: Volume Two: The Dead City & The Dark Earth Below was published by Night Shade Books on June 2, 2015. It is 232 pages, priced at $15.99 in both trade paperback and digital. The cover is by Matthew Stewart. Read an excerpt here.