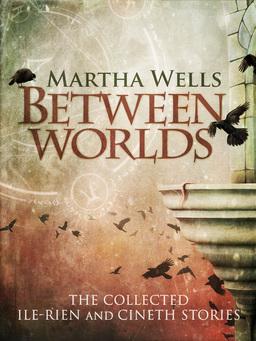 Martha Wells was one of the most popular writers ever published in Black Gate. In fact, her three Cineth stories featuring Giliead and Ilias helped bring us a host of new readers.

Those three stories have never been collected — until now. Between Worlds: The Collected Ile-Rien and Cineth Stories, one of six anthologies to be funded by the successful Six by Six Kickstarter in December, is now available. It contains “Holy Places,” “Houses of the Dead,” and “Reflections,” which first appeared in Black Gate 10, 11, and 12, as well as “Night at the Opera,” a brand new Nicholas and Reynard story set before The Death of the Necromancer, and two other stories.

We serialized Martha’s complete novel The Death of the Necromancer here.

In addition to the Black Gates stories and the new Nicholas and Reynard tale, Between Worlds also features “The Potter’s Daughter,” a prequel to Martha’s novel The Element of Fire, and the Giliead and Ilias story “Rites of Passage.”

“Holy Places” — Ilias is abandoned by the Finan family and finds Andrien, just as the house is attacked. “Holy Places” first appeared in Black Gate 11, August 2007.

“Rites of Passage” – -Most people in Cineth believe Giliead is too young to take up the duties of a Chosen Vessel, but he may not have a choice. “Rites of Passage” first appeared on MarthaWells.com in April 2014.

Between Worlds: The Collected Ile-Rien and Cineth Stories was published on April 6, 2015. It is 166 pages, available only in digital format for $2.99

New Martha Wells! Jubilation! Her works is what first attracted me to BG. I am so there.