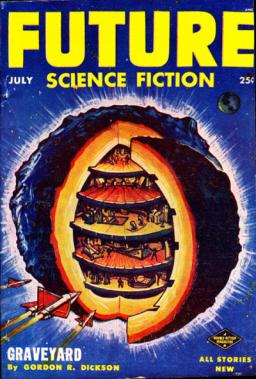 I’ve been tracking down some less well-known Jack Vance stories, and that’s what led me to this issue of Future Science Fiction.

Future was one of two magazines (the other being Science Fiction Stories  — in its later years sometimes called The Original Science Fiction Stories, though that was never its official title) that Robert A. W. Lowdes edited for Columbia Publications, off and on, first for a couple of years in the late ’30s and early ’40s, after which the titles were revived in 1950, and continued to be published until 1960, under a set of titles and numberings that frankly make my head hurt.

I’ve written about Lowdes’ magazines before, and noted that he always had a tiny budget and still managed to produce pretty fair issues. This issue isn’t a particularly strong one, but it does have a quite distinguished list of authors, only one of whom could be called “Little Known.”

The format at this time was that of the classic pulp, about 7” by 10” with low quality paper. The cover here is by Milton Luros, illustrating Charles Dye’s “The Aeropause.” The features include “Down to Earth,” an extended letter column, this time featuring mostly letters suggesting alternate endings to Clifford Simak’s “… And the Truth Shall Make You Free,” which had appeared in the March issue.

It seems Lowndes had requested just this. I’m not familiar with the story, so I really couldn’t make head nor tail of the discussion. The only name I recognized among the letter writers was Robert Coulson, later a Hugo winner (with his wife Juanita) for the fanzine Yandro (which began appearing in this year, 1953), and also a novelist (mostly in collaboration with Gene De Weese.) Coulson was also credited as cowriter on Piers Anthony’s Laser Books novel But What of Earth?, but that was entirely against Anthony’s wishes, as Coulson made a number of changes at the behest of Laser series editor Roger Elwood, changes Anthony completely opposed. (Thanks to Ian Covell for this tidbit). 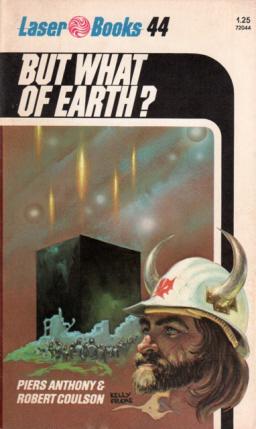 Lowndes also includes a very brief book review, under his usual book review column title (Readin’ and Writhin’). He discusses Charles Dye’s Prisoner in the Skull, and takes Dye (gently) to task for combining SF with the “sex-crime thriller” (a la Mickey Spillane). Curiously, he placed this review just before Dye’s story in this issue.

“Graveyard” is an early Gordon Dickson story, about Jim Marks, a brilliant scientist who is involved in a nuclear accident. He survives, but his beloved dog dies, though not before giving birth to a litter, of which one survives, though blind. His next project is to help build a space station. Things are complicated because he falls for a woman, intelligent but apparently not a good person. Jim has become very attached to his new dog… the blind puppy, and the woman is jealous.

It’s clear there is a very unusual attachment between Jim and his dog, so when it becomes clear that an intelligent dog is necessary to help guide first rocket to the space station’s intended orbit, Jim’s girlfriend arranges for Jim’s dog to be the chosen one… hoping that that will get him out of the way. But (no surprise!) their attachment, enhanced by whatever mutation occurred in the nuclear accident, is even closer than anyone guesses… This is competent but minor stuff, a bit predictable, and a bit too implausible for my taste. 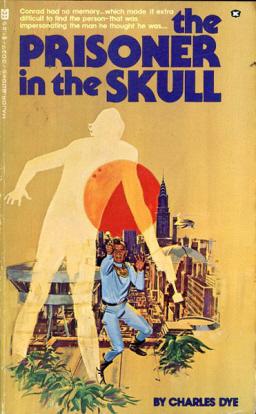 Vance’s “Four Hundred Blackbirds” is early Vance, not widely known, and like a number of his early stories, uncharacteristic of most of his best known work. In fact, in the Vance Integral Edition, it was assembled, quite appropriately, into a book called Gadget Stories. It concerns a peaceful nation that has been conquered by a warlike dictatorship. A functionary comes to a scientific institution, and after making fun of the useless research done there (silly stuff like solving Fermat’s Last Problem), lights on one potentially useful thing: a telepathic link to birds. The idea is that fighter planes can be linked to a coordinating brain and act together like a flock of birds. The scientist with this idea is forced to develop it in service to the evil dictatorship, and is regarded as a traitor. But he has a plan, of course… It’s OK stuff, but nothing special, and not very Vancean at all.

The least known writer here is Charles Dye, who was only active in the field for a few years, publishing one novel and perhaps a dozen stories from 1950-1953. During this time he was married to Katherine MacLean (who is believed to have ghosted, or at least collaborated with Dye, on a couple of stories under his name). They divorced in 1953, and Dye died in 1960, aged only 35.

“The Aeropause” is a strange and rather ambitious story, about two lovers who are “genetic defectives,” and thus not part of the World State. They are recruited to become the disembodied brains controlling a space station, intended to help “Central Indexing” against “Central Security.” The tragedy is that the lovers, though part of the same space station, cannot communicate… and the resolution is even more tragic, after they realize that they have been recruited under false premises to be instruments of war, leading to an unusual conclusion. It doesn’t really work, hardly at all, but it’s got some interesting and original ideas.

Richard Wilson is these days not that well-known either, but he published a great many short stories over some 50 years, from 1938, when he was 18, until 1988 (he died in 1987); and he won a Nebula in 1968 for “Mother to the World.” “Strike” is subtitled “A “Dateline Mars” Story,” and it’s about a newspaper’s reporting of the strike of the Interplanetary Spacemen’s Union against Interstellar Carriers. Sabotage is alleged when a rocket crewed by “scabs” explodes, but a reporter smells a rat, and sneaks aboard another ship, where of course he finds out the (predictable) truth. Native Martians don’t come off well in the story, nor do corporations. You might cheer, but the story is just as slanted and contrived as any told from the opposite viewpoint. 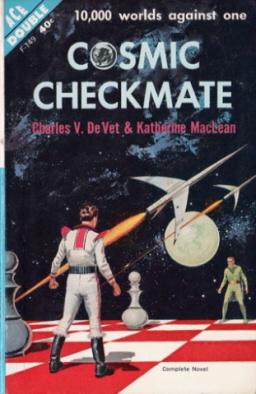 David Grinnell might not sound like a famous name, but it’s the pseudonym Donald Wollheim adopted for his fiction after he made editing his primary career. “Road to Rome” is another silly story about Mars. A mysterious individual comes to a chemical supply company during the depression to buy up their entire supply of a substance they just lost their main customer for… no prizes for guessing that what they buy is uranium, and that they say they’re from Rome but that that’s not in Italy or New York… instead it’s the name of an asteroid that mysteriously blows up on close approach to Mars some years later.

Philip Latham is another pseudonym, this time for astronomer Robert Richardson. Richardson wrote about 20 stories and three novels, mostly as by Latham, as well as quite a few popular science articles, as by Richardson. When I was younger he had a considerable reputation as one of the “real scientists” who also wrote good SF. His best known stories, both very good in my opinion, are probably “The Xi Effect” (1950) and “The Dimple in Draco” (1967).

“The Martian Ritual” (or “Martian Ritual,” the title is given both ways in the magazine) turns on a man reporting after a trip to Mars that the “canals” are just artificial lines painted by the Martian for no discernible reason – it’s just a ritual. The story, not terribly subtly, suggests that the Earthmen, even as they disparage the Martian rituals, are engaging in just as ritualistic behavior.

Finally, the best story in this issue is Katherine MacLean’s “Where or When?” MacLean was born in 1925 and is still alive. She was publishing very fine work until the late ’90s, though she was never terribly prolific. She wrote two solo novels, and two collaborative novels. She won the Nebula for Best Novella for “The Missing Man” (1971), and she was SFWA’s Author Emeritus in 2003. I also quite enjoy her collaborative novel with Charles V. DeVet, Second Game (aka Cosmic Checkmate).

“Where or When?” is about a woman in 2052, working on her Philosophy Ph.D., who establishes a telepathic rapport with a man… over time they fall in love, and she becomes convinced she must find him… of course the reader guesses, with the help of the title and a slightly too obvious hint at the close, that he and she are separated not just by distance. Not terribly new or surprising, but quite nicely done.

Rich Horton’s last retro-review for us was the August 1967 issue of Amazing Stories. See all of Rich’s retro-reviews here.

I love these retro-recaps, Rich. The only problem is that now I have to dust off my Ace copy of Cosmic Checkmate and actually find the time to read it…