Paul Park is one of the most acclaimed writers working in American fantasy. His four-volume A Princess of Roumania series (A Princess of Roumania, The Tourmaline, The White Tyger, and The Hidden World), set in a parallel world where magic works, has been nominated for the World Fantasy, Tiptree, Locus, and Sidewise awards, and his short fiction has been nominated for both the Nebula and World Fantasy Awards. Under his own name and the name Paulina Claiborne he has published fiction set in the Forgotten Realms, including the 2012 novel The Rose of Sarifal.

But Park’s first three novels, Soldiers of Paradise (1987), Sugar Rain (1989), and The Cult of Loving Kindness (1991), jointly known as The Starbridge Chronicles, are nearly forgotten today — and in fact have been out of print for over 20 years. But they were widely praised when they first appeared. Soldiers of Paradise was nominated for the Clarke Award, and Kim Stanley Robinson called it “A superb novel — vivid, harsh, mysterious.” Asimov’s SF magazine said “I was hooked… a real trip to someplace else that is really Someplace Else.”

The praise continued with Sugar Rain. Gene Wolfe said “A brilliant, stunning, frightening writer, a major talent… a book to hoard and savor, a book to read and reread.” And Asimov’s called it “Nightmarish… no brief review could do justice to the richness and strangeness of this world.”

Faren Miller at Locus reviewed the entire series as they appeared, and the Locus quotes were plastered on the paperback editions. Miller called them “A powerful yet elusive experience, like an unusually vivid dream” (Soldiers), “Remarkable… marvelous and grotesque” (Sugar Rain), and “Memorable… Park creates a realm of haunting strangeness, melancholy beauty, atrocity and wonder” (Loving Kindness).

I purchased the books as they appeared in paperback from AvoNova. The gorgeous covers for the first two were by Gary Ruddell, who was doing some exceptional work in fantasy at the time, especially with his covers for Michael Shea’s Nifft the Lean novels for Baen (The Mines of Behemoth, The A’rak, and The Incompleat Nifft.) The cover artist for The Cult of Loving Kindness is unknown.

After I found Soldiers of Paradise, I bought the others as they were published in hardcover by William Morrow, and eventually tracked down a hardcover copy of Soldiers as well (originally published by Arbor House). The covers of the first two were by Don Maitz; the cover of The Cult of Loving Kindness was by Linda Burr.

Our friends across the pond are probably most familiar with the Grafton paperback editions published between 1989 – 1993, all with covers by Peter Elson. 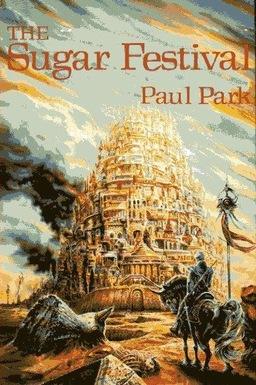 The Starbridge Chronicles has been compared to Brian Aldiss’ Helliconia trilogy; it is set on a world where years last 80,000 days (approximately 219 Earth years), and each season lasts for generations. Here’s the book blurb for Soldiers of Paradise:

Enter a world where seasons last for generations, and the hope and curse of the future lies in the coming sugar rain. Where birth brands your flesh, and death leads you through the Nine Hells to Paradise. Follow two men, renegades of the elite Starbridge ruling class, as they descend into the horrific lower depths of the phantasmagoric city of Charn. A prince and a doctor, two well-intentioned aristocrats sparking rage and revolution in their wake — sowing the dangerous seeds of a profound and alien concept: freedom!

And for Sugar Rain:

In the crumbling city-state of Charm, the cruel, generations long winter is finally over — as is the oppressive class-rule of the golden-blooded Starbridges. For ancient prophecies have now come to pass — foretellings of floods, of the birth of monsters… and of the sweet, fertile and dangerous sugar rain. The tyranny of the elements has brought the smell of gasoline and the taste of chaos to the troubled world. And high-born Dr. Thanakar Starbridge and his forbidden lover Princess Charity find themselves separated by war… and doomed by the bloody pleasures of riot and revolution.

If you’re interested in tracking them down, your best bet may be The Sugar Festival, a 1989 omnibus collection from the Science Fiction Book Club that contained both Soldiers of Paradise and Sugar Rain. It’s pictured at right, the cover is by Ron Walotsky.

All three volumes of The Starbridge Chronicles are currently out of print, but they are available in digital editions from ElectricStory.com, Inc.

Hmph– I started “All Those Vanished Engines” — which I haven’t been eager to jump back into after my first hour with the book. But I’ll ride it out before it’s due back at the library.

It’s the kind of book that’s impossible to read straight through. You’re always turning back to try to figure out what’s happened before. I enjoy that sometimes, but the payoff at the end has to be pretty big for that style to work for me.

I’m partial to the top three covers, which I think are superb. I especially love the one for Sugar Rain. The Peter Elson cover for The Cult Of Loving Kindness is also quite stunning.

I understand ALL THOSE VANISHED ENGINES is Park’s first return to science fiction in many years. I’ve been curious to try it myself… but I want to try A PRINCESS OF ROUMANIA first.

> I’m partial to the top three covers, which I think are superb. I especially love the one for Sugar Rain.

I agree completely. I completely fell in love with these covers when I first saw them. I need to explore the work of Gary Ruddell a bit more here on the site.

Oh, that top trio of covers is gorgeous. The Walotsky cover for The Sugar Festival looks so much like the cover of Martha Wells’s City of Bones, I had to look that book up to see if they were the same. They aren’t. It was Richard Bober. But check out that resemblance.

I’ve heard one of Park’s beta readers talk about his latest novel, and it sounds pretty delicious, in a postmodern kind of way. I haven’t read any Park yet. Probably the YA books would be the place to start?

I also think the top three covers for the Starbridge Chronicles are absolutely fantastic, especially the two by Gary Ruddell. I’ve always wanted to read this series and never understood why it remained so obscure despite such strong praise by critics.