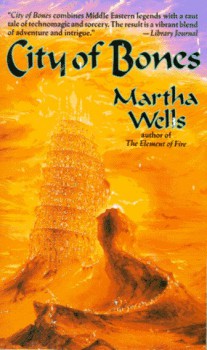 It’s always fun to find a fantasy book that isn’t based on medieval Europe. City of Bones, by Martha Wells, is advertised as a story which draws on the Arabian Nights, and it does not have genies and magic lamps, but certainly brave thieves and dangerous deserts. It also contains a little bit of steampunk and a post-apocalyptic element.

Our hero Khat is a relic dealer, which is to say, a shady and unlicensed archeologist-for-profit. It seems that long ago, the world was wetter and cooler and more hospitable, and artifacts from that time have great value — not to mention, very occasionally, magic powers. Now, most of the world is covered by a rocky desert called the Waste. Khat is a krisman, a hardy marsupial humanoid who is well-adapted to the Waste, but reviled in most cities. Charisat, where he lives, may be one of the richest trading cities in the world, but it’s a cruel and hierarchical place.

Khat and most of the people he knows are noncitizens, and they take it for granted that they have very few rights. They aren’t even permitted to use “real” money, just tokens that serve the same purpose. Khat and his associates are very careful never to speak of buying artifacts; they barter for them. Even using the word “buying” could bring the Trade Inspectors down on them, and if the Trade Inspectors take them away, they won’t be coming back.

This tension between the powerful and the powerless is one of the driving forces of the story. When Khat is hired by a Patrician to help explore a nearby ruin, he takes it as read that he’ll probably be betrayed. It only becomes worse when he realizes that the Patrician is actually a Warder, a law enforcer who uses sanity-destroying magic. Khat becomes more and more involved in events, but he never entirely trusts any of his companions, even fellow relic dealer Sagai, his long-time partner. His paranoia is at least partly justified.

The other main character is junior Warder Elen, who is extremely high-status, forthright, and not paranoid enough — in other words, a near-perfect foil for Khat. The two of them are forced to work together to locate some unusual artifacts, but it doesn’t go smoothly, in part because Elen initially regards Khat as a dangerous subhuman. This isn’t one of those books where prejudice is triumphantly cast aside once the heroes see how inaccurate it is. Inequality is an inescapable part of Charisat, and the fundamental gulf between Khat and Elen is present in all their interactions. 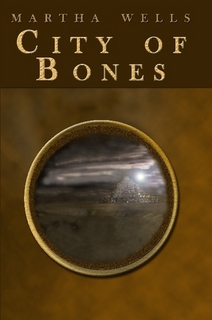 The story is full of rich description, as it has to be; unfamiliar settings require more setup than standard ones. Colors are everywhere, from the gold and orange of sunset on the Waste to the rich blues that mark ancient tilework. Details of daily life — paying for water in the lower quarters, the red lanterns meant to repel ghosts — are deftly filled in. The heat of this world, in particular, is ever-present and palpable. The reader becomes almost as accustomed to it as the characters, understanding that “almost cool” is the best they’ll experience during the day, and “like the inside of a bread oven” is more likely.

When one of the major supernatural threats first appears — ghosts which can kill people by freezing them to death — it feels profoundly unnatural, almost perverse. I did sometimes have problems picturing the Waste, but that’s because it has no real-world analogue; it’s mostly like a stone desert, but also a bit like a lava flow, riddled with lava tubes.

In short, this is a vivid and fascinating, if sometimes grim, story. The world is engaging and the characters nicely drawn. Khat often edges towards antiheroic and Elen is up to her relatively honest neck in intrigue; if you’re interested in conspiracies and mysteries, this book has them. And if you’re at all tired of sword-wielding heroes on horseback, the setting is a breath of fresh (if not cool) air.

I love this book. In fact, I’ve loved every Martha Wells novel I’ve read so far, and I’m hoarding her new release a while, savoring the fact that I have it before I dive in.

One of the grace notes I especially admired in City of Bones is when Khat is looking at a partially reassembled mosaic from the world before the long drought. He’s trying to make sense of what looks to him like a mythical beast, but what the reader can figure out is a dog. It’s such a lovely detail of worldbuilding, that these people stopped having enough water for even their elite to keep pets, so long ago that they have no words or stories for them.