I’m an unapologetic geek. I don’t just watch genre shows and read genre books, I immerse myself in them. The ones that stay with me, that I actually decide to devote myself to, linger with me, becoming part of the fabric of my internal world, the thought processes that help me deal with the mundane levels of reality. I analyze these cultural components, trying to pick them apart to figure out why the events unfolded the way they did and, more importantly, what I can learn from it. (For an example, consider how I found an excuse to talk about Thor on my Physics blog, using the film as a lesson in how to be a good scientist.)

Black Gate is also dedicated toward this sort of exploration, publishing not just fantasy fiction but also thoughtful commentary on the genre, in both the magazine and also on this blog. (At this point, I feel the need to point out Aaron Starr’s recent excellent post “The Gods Never Urinate,” which is an exceptional case of this.) Even on our Twitter feed, @BlackGateDotCom, we try to share as much of this sort of material as we can.

But let’s really think about what’s going on here. The genre of science fiction and fantasy, more than any other, reflect upon the fundamental nature of reality. They can do this literally, metaphorically, or (when at its best) in complex combinations of the two. So you have reality, and then you have the genre literature which is reflecting upon that reality.

And the truly motivated fans don’t just read the literature. Remember, the word “fan” comes from “fanatic.” If you don’t obsess at least a little bit, you aren’t a fan, you’re just someone who likes the show or the book. Fans go a step further, and we reflect upon the genre. We reflect in our own minds, and through the written word, both online and in print, in podcasts and vidcasts, and in person at gaming stores, comic shops, bookstores, conventions … or, let’s be honest, any time more than two of us are in contact with each other. The depth of the analysis can vary widely, of course, but that reflection on the genre is the defining trait of fandom.

Fandom is the process of reflecting upon the reflection of reality. 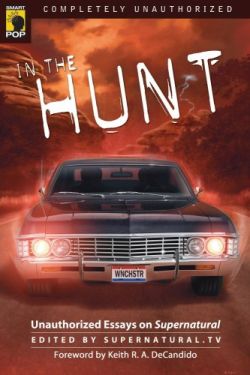 Perhaps no trend reflects this more clearly than the release of books focused specifically on analyzing in detail the shows and books that we love. And, since there was no episode of Supernatural last week, I figured I’d take the opportunity to discuss a book which does just that for the show I’ve been blogging all season.

Smart Pop Books’ In the Hunt features a collection of 22 unauthorized essays by a diverse group of fans of Supernatural, edited by Supernatural.tv. Authors include not only writers, but also college professors, theologians, ministers, psychotherapists, students, and taekwondo black belts! (They cast a wide net for these things.) The book was written after season 3’s finale and before the premiere of season 4, which makes for some interesting reading.

What’s most fascinating reading the book now is how many of the clues about seasons 4 & 5 (not so much 6) are hinted at by the essayists. For example, there are numerous observations of the fact that there are no Angels in Supernatural. Angels got introduced in Season 4, with the war against Lucifer becoming the cornerstone of seasons 4 & 5, with its ramifications resonating throughout all of season 6. Yet even at the end of season 3, some of the essays see writing on the wall, believing that Sam will be a vessel for Lucifer.

And the transition of Dean into the moral center of the group, which has been profoundly evident this season, was also explored. It is interesting to think back to the beginning of the show, when Dean was willing to do pretty much anything to take out a monster, and see how much more moral he’s become by this point.

In fact, most of the analysis continues to hold up well even with the complete transformation of the underlying mythology. Even with the introduction of Angels, the real morality of the show is played out within the human characters, or motivated by their actions. The Angels are nearly as bad as the demons as far as their willingness to act immorally in an effort to advance their goals, and in fact was the entire basis of the most recent episode.

Conflict between the essays is also common in these Smart Pop collections, and nowhere does it show up quite as well as between two essays: Mary Borsellino’s “Buffy the Vampire Slayer, Jo the Monster Killer: Supernatural‘s Excluded Heroines” and Jacob Clifton’s “Spreading Disaster: Gender in the Supernatural Universe.” The first portrays Supernatural as a misogynistic show, attempting to solidify every single gender stereotype that Buffy: The Vampire Slayer sought to overthrow. The latter more sympathetically portrays Sam and Dean as male archetypes trying to find their way in a distinctly feminine archetypal world of the mysterious. The two essays agree that Supernatural is male-dominated (which a look at the cast list makes obvious), but they fundamentally disagree about why this is and what the effects are. But, most importantly, neither essay is wrong.

If there’s one flaw to the book, it’s the number of times you read a description of Mary Winchester’s death. The defining moment of the show – especially the first two seasons – this event is picked over from about every perspective that it can be. In some cases, I think this description could have been removed, because it wasn’t really needed in the essay in question, but the author couldn’t really have known that it would be described verbatim by nearly every other essay. Still, this is where some judicious editing could have helped out.

That having been said, though, the book does touch on all the key concepts from the series: heroism and sacrifice, gender and family dynamics, loyalty and betrayal, good and evil, and so on. The topics of the essays are diverse, as can be seen from these two quotes that particularly stuck out at me as worth remembering:

… heroism on [Supernatural] is all about what the Winchester family will sacrifice for each other. – Dawn, Webmaster of Supernatural.tv, Introduction

“… we may think of horror as what happens when the familiar meets or becomes the unfamiliar. Horror stories involve something strange, out of place, unseen or unknown, something that makes our skin crawl and our spines tingle. We all know the delicious dread good horror can provoke in us. But it’s also significant that this thing, this disturbing anomaly, is an unexpected intrusion into our everyday world. Horror needs the familiar as well as the unfamiliar.” – Randall M. Jensen, “What’s Supernatural About Supernatural?”

If all this sound interesting, Smart Pop Books makes it real easy to check out their product, by posting one of their various essays every weekday on their website. They currently have Mary Fetcher’s great “Riding Down the Highway: Why the Impala Is the Third Main Character” available on the website through May 20! (For any fan who remembers how season 5 ended, this essay is particularly insightful.) 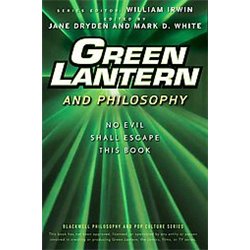 Smart Pop Books isn’t the only one who puts out these kind of books, although theirs are among some of the more accessible ones.

I’ve been fortunate enough to show up in a handful of these anthologies:

If you’ve made it this far and are intrigued by the prospect, then I have a treat. If you’re ready to take the next step and begin reflecting on the reflection of reality, there’s currently an open call for abstracts to the Game of Thrones and Philosophy collection. The abstracts are due by July 6. If accepted, the first draft is needed by August 22. This is the Blackwell line, so it pays an honorarium but is also a bit more academic in approach. That’s certainly not everyone’s cup of tea, but if it is, and you’re a George R. R. Martin fan, it’s a fun opportunity.

Seriously, are you going to GenCon this year?

Yes, I am planning to attend GenCon. Just got my paperwork turned in, as a matter of fact.

My older kid would be thrilled to be offered up to a dragon. (But then, this is the kid who keeps telling us how much he wants to run in the parking lot, so maybe it’s not a comment on our success at transmitting our geek aesthetic.)