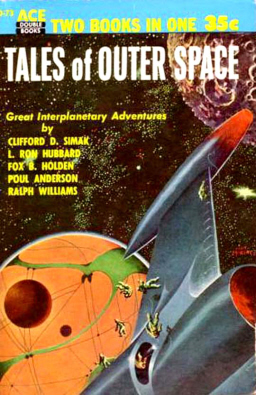 Sometimes I think I owe Donald A. Wollheim for a big chunk of my childhood.

Today we’re looking at Tales of Outer Space, a collection of interplanetary adventure tales edited by Wollheim in 1954, a decade after he invented the mass-market SF anthology with The Pocket Book of Science Fiction in 1943 (the first book with the words “Science Fiction” in the title), and not long after he produced  the first original SF anthology, The Girl With the Hungry Eyes, in 1947.

That’s some pioneering stuff. But Wollheim spent most of his career as a pioneer. From 1947 to 1951, he was the editor of Avon Books, where he introduced mainstream America to mass-market editions of some of the best fantasy from the pulp era — including Ralph Milne Farley’s An Earth Man on Venus (which I discussed last month), A. Merritt’s The Moon Pool, and eighteen issues of the highly sought-after fantasy paperback magazine, The Avon Fantasy Reader, among many other accomplishments. He even published C. S. Lewis’s Silent Planet space trilogy.

In 1952, Wollheim left Avon to spearhead a new paperback imprint, Ace Books, where he remained for 20 years. While there, he added science fiction to their lineup for the first time and, in a stroke of brilliance which endeared him to future generations of paperback collectors, invented the Ace Double in 1952.

You may have heard of some of his other successes at Ace as well: he first introduced Tolkien’s The Lord of Rings to the US in 1964 (against Tolkien’s wishes, as it happened) and published Frank Herbert’s obscure hardcover Dune in a paperback edition that made it a bestseller in 1965.

That ought to be enough for anyone. But of course, as many of you know, it wasn’t enough for Wollheim. In 1971, he left Ace to found his own publishing company, which bore his initials. DAW was the first mass market publisher to specialize in SF and fantasy, and before his death in 1990, it had acquired and published over a thousand titles, making it one of the most successful genre publishers of all time.

Of course, most of that was in Wollheim’s future when he released Tales of Outer Space — but the seeds of greatness were already there for anyone who looked. 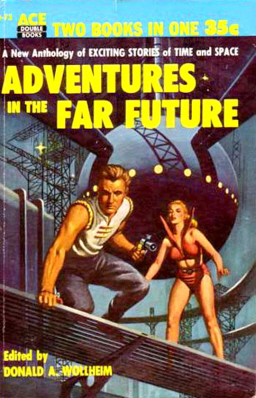 Tales of Outer Space was an Ace Double, which means it was teamed with a second book on the flip side: Adventures in the Far Future, an SF anthology focused on far-future Earth.

But it’s Tales of Outer Space that really appeals to me every time I pick up a copy. Perhaps it’s Mort Lawrence’s evocative cover art, with a desperate high-orbit space walk over a strange alien world. Perhaps it’s the length of the fiction — I have a fondness for longer tales, and the fives tales assembled here are all novelettes culled from science fiction pulps.

But more likely, it’s Wollheim’s terrific description on the first page, under the heading “Interplanetary Epics”:

The most thrilling things to come will be the daring exploration and conquest of distant worlds. Here, in this brand-new science-fiction anthology, are five unforgettable novelettes which contain all the different types of excitement and peril that will follow the opening up of the universe to the rocket men.

Ralph Williams tells the strange story of the first break-away from Earth. Fox B. Holden introduces us to Mars and the incredible inheritance that waits there. Clifford D. Simak presents a mystery of one world’s inhuman inhabitants. Poul Anderson spins a cosmic web of the coming galactic empire. And L. Ron Hubbard tears through the veil of space itself to pose a turning point in humanity’s interplanetary epic.

Tales of Outer Space is an original collection of top science-fiction by top writers.

“Doorway in the Sky”
They thought their ship was the first to break into outer space until they spotted that derelict!

“Here Lie We”
The Martians had power, science, and experience — yet they were helpless before a fate that left Earthmen fearless!

“Operation Mercury”
No one knew whether the weird mimic of the Sunward Side was harmless — or crazy like a fox!

“Lord of a Thousand Suns”
He was just a man without a world until a certain space soldier blundered!

“Behind the Black Nebula”
With all the resources of super-science behind them, they still fought a losing war against that leaderless horde!

The rocket men! I love that description of astronauts. You didn’t see it much after the 1969 moon landing.

All the stories are drawn from Astounding, Startling, or Planet Stories. Here’s the complete TOC:

“Behind the Black Nebula”
L. Ron Hubbard (Astounding Science Fiction, 1941, as “The Invaders”)

Tales of Outer Space was edited by Donald A. Wollheim and published by Ace Books (as D-73) in 1954. It is 140 pages (total with Adventures in the Far Future, 318 pages). The cover price is 35 cents. It has never been reprinted, and there is no digital edition.

[…] in June I wrote a short blog entry about one of my favorite Ace Doubles, Tales of Outer Space and Adventures in the Far Future. I […]

[…] knew that bit about Don Wollheim and miniatures, or I would have mentioned it in my recent article. That’s cool […]

[…] the Black Circle, Manly Wade Wellman’s The Complete Hok the Mighty, Donald Wollheim’s Tales of Outer Space, Isaac Asimov’s Before the Golden Age, and E.R. Bensen’s The Unknown (just to name a […]

[…] The last Ace Double we looked at here was Donald A. Wollheim’s twin anthology Tales of Outer Space/Adventures in the Far Future. […]

[…] St. Clair Agent of the Unknown by Margaret St. Clair Secret of the Lost Race by Andre Norton Tales of Outer Space/Adventures in the Far Future, edited by Donald A. Wollheim The Pirates of Zan by Murray […]