As you saw last week, I’ve been posting shelfies in a Bookshelf subreddit, with comments about some of the books. It’s been fun! Over the weekend, I posted my Douglas Adams shelfie. I re-read the first three books last Fall, and still loved them. Books four and five are good, though I find four a bit jarring, and I don’t always do the latter ones – which was the cas 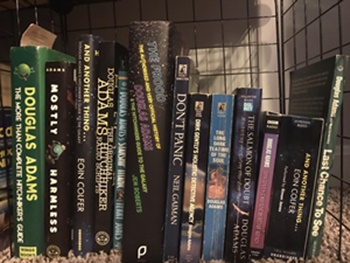 And around then, I listened yet again to the BRILLIANT BBC radio play for the first Dirk Gently book. I love diving into Adams every once in a while.

My all-time favorite author, John D. MacDonald was a brilliant societal commentator. Adams and Terry Pratchett (I’ve written about him several times. Here’s one post) are right up there with him; but they used humor. And I think that makes their books re-readable over and over.

I’m a fan of the books and the radio plays (you can see in my shelfie, I’ve got a book of those). I often listen to audiobooks while working, and I’ve often put on a Hitchhiker’s book and let it accompany me through the day. I thought that Eoin Coifer’s authorized continuation was okay. It captured the tone well enough, but it felt really long, and moved along kinda slowly. I preferred reading the audiobook to reading the novel, but it was good enough. Haven’t revisited that one yet.

Starship Titanic is briefly mentioned in Life, the Universe, and Everything. It was the subject of a video game (which I played, of course), and there was a lightweight book based on the game, written by Monty Python’s Terry Jones. It’s fine. I think Jones himself reads the audiobook, which I’ve listened to.

I LOVE Dirk Gently’s Holistic Detective Agency. I wrote about that (link below) before I did Hitchhiker’s. The book is great. The BBC radio play is my favorite radio play. The sequel novel, The Long Dark Tea-Time of the Soul, is pretty good. The radio play, with the same cast, got a little free and loose with the story. It’s good, but definitely a step down from the first one.

Adams had written part of a third Gently novel, before he died. It was ‘finished,’ incorporating some of his notes, and was the title and center-piece of The Salmon of Doubt. This was a collection of odds and ends (mostly non-fiction). I’ve read it twice, and frankly, it’s not good. I don’t really like it at all.

I quite like Stephen Mangan’s Dirk Gently miniseries. In-depth essay here. I DESPISED the piece of trash that was the recent BBC series co-starring Elijah Wood. Beyond the name, it had nothing to do with Adams’ creation. I talked about it here. Half of the essay is positive, because I also talked about the excellent show, Timeless.

Jem Roberts’ authorized biography was a pretty informative read, and I learned quit a bit from it. I also like Neil Gaiman’s much shorter history of the radio plays. Both are recommended.

Last Chance to See might not be everyone’s cup of tea, but I think it’s worth checking out. It was originally a radio series, then a book, and also a TV series. Adams visits various endangered species around the world. I thought it was neat.

So, that’s a look at me and Douglas Adams, through my bookshelf.

If you click on my ‘Don’t Panic’ link at the bottom, you’ll find my in-depth dive into The Hitchhiker’s franchise. I think it’s one of the better things that I’ve written here at Black Gate. (Of course, I’ve been blogging for nine years now – Blind squirrel, nut, right?)

I included a couple ‘new’ entries for the Guide, which were quite fun to write. Here’s one, related to the actual ‘trilogy’ itself:

The Hitchhiker’s Guide to the Galaxy, The Restaurant at the End of the Universe, Life, The Universe and Everything, So Long, and Thanks for All the Fish, Mostly Harmless (all written by Douglas Adams) and And Another Thing (by Eoin Coifer). As a trilogy implies three – rather, it more than implies, it requires, therefore, demands – three; the Hitchhiker’s Guide to the Galaxy Trilogy cannot be six books, therefore, it does not exist. Therefore, there is no trilogy and if you ask about it again, the Guide will simply reboot itself.

Pan Books – Not one of the great publishing corporations of Ursa Minor. In fact, it was so minor it was relegated to Earth, which as is/was/will be well known, was mostly harmless. It was, however, acquired by galactic reporter Trillian Astra and renamed PanMacMillan.

How one publishing house could include Jane Austen, Leslie Charteris and Joan Collins on their roster is a puzzler. In fact, after calculating the improbability factor, the Heart of Gold’s improbability drive actually blew a rod trying to restore normalcy. It is still in the shop for repairs. The most recent inquiry to the shop received an update of “Should be tomorrow at lunch, though six weeks from next Wednesday sounds likely too. Don’t call back.”

So….. here’s another entry, which hasn’t appeared at Black Gate yet. Once again, I think I did all right.

The term is believed to be attributable to the people of Rankarella, a small planet in the third system of the NeoNorin galaxy.

The Rankarellans were known (to the extent they were known for anything at all) for slapping people in the face with a fish as a greeting. So, imagine a secretary saying “Cup of coffee, Mister Humthroat?” as her boss arrives in the morning. At which point he hits her with a fish.

There are no codfish on Rankarella, which makes that particular word, well, codswallow. There are no

There are no Babel fish anywhere on the planet. So, visitors from off-planet, who might enjoy the taste of fish, were less than pleased when, having asked, “Excuse me, where is the nearest restroom?” they end up feeling a fish with their face and are completely unable to communicate with the person who just hit them with said fish. Possibly repeatedly. As what there is of the Rankarellan economy is built on tourism: well, you get the idea.

This combination of codswallowing and a lack of Babel Fish has led to many wars with other planets. In fact, it’s amazing that the rest of the galaxy hasn’t exterminated the Rankarellans.

Oh, bugger it: maybe a Vogon Constructor Fleet will take care of the whole codswallowing nonsense. Where can I get a PanGalactic Gargleblaster around here, anyways?

Editor’s Note – That last line was the last entry by that particular Guide researcher.

Hey – it made me laugh. I’ve thought about a Black Gate post consisting entirely of updates to the Guide. That seems like a pretty fun post!

Of course, I’m not the only Adams fan here at Black Gate. So, below, are all of my posts, along with some from Steven H Silver, and M. Harold Page.

(Maybe I need to go with Robert A Byrne around here). Though, based on John O’Neill’s summons, apparently ‘WhereTheHellIsThatGodd**nInternBryne?’ would be more suitable.

What I’ve Been Listening To: September, 2022

The Golden Age of Science Fiction: The Hitchhiker’s Guide (1) by Steven H Silver

The Golden Age of Science Fiction: The Hitchhiker’s Guide (2) by Steven H Silver

I’m sure I’ll write more Adams this year. I definitely want to do several Terry Pratchett posts – I’m usually in the mood for both at the same time. So, we’ll see. I come across folks who like Hitchhiker’s but haven’t read Dirk Gently. I can’t recommend at least the first book, strongly enough.

Cool post Bob. Funny guide entries. I am not a great re-reader of books, but The Guide has definitely been an exception, having been re-read a few times. I still have the radio plays on cassette, should break them out and also confuse the kids my grasp of arcane technology..

I kind of enjoyed the BBC Gently mini series, for what it was – once I realized it had nothing to do with Dirk Gently, other than the name of the title character. No mention of The meaning of Liff / Deeper meaning of Liff?

Tony – Generally, I am more prone to re-reading short stories. Part of being a hardboiled/mystery guy, I think. But man – I continually go back to Dirk Gently, and the Hitchhikers. I just used the audioibook of The Long Dark Tea Time of the Soul as background while doing computer stuff all weekend.

I rarely begrudge somebody liking something I don’t. Outside of the Sherlock Holmes world, nobody gets me liking Solar Pons. But man, I loathed the new BBC series. I can’t say a good word about it.

I’ve got about 6,000 words of a story with Groucho Marx as Rufus Flywheel, on a case with Nero Wolfe. It’s a ton of fun. I’m dying to write at least an office scene of Dirk Gently explaining ‘fundamental interconnectedness’ to Nero Wolfe. Which came about because he did his random naviational thing and followed Archie there. Man, that will be a hoot.

And I do plan, at some point, coming up with a half-dozen to a dozen new Guide entries. It’s a fun – and very different – way of thinking!

I remember coming downstairs on Saturday mornings to sit in Dad’s recliner next to the console stereo, listening to the NPR broadcast of Hitchhiker’s on his giant headphones; and then watching the BBC production when it aired on PBS.

One of the things I’m really sad about: In 1993 or so, Douglas Adams was doing a book tour through the midwest, including Madison, WI, where I was going to grad school. I went to his reading, then had him sign one of those Barnes & Noble Hitchhiker’s omnibus volumes bound in faux leather. Which then got destroyed the next summer because it was sitting in a box on the floor of my basement room at my parents’ place when the sump pump failed and we got about a foot of water in the basement.

Oh man – THAT is a bummer! Would be great to still have that…