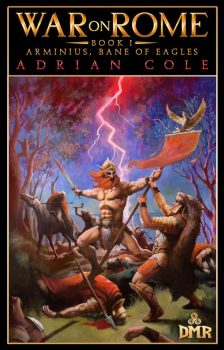 Arminius, Bane of Eagles (2021) is the first volume of Adrian Cole’s new sword & sorcery alternate history trilogy set against the struggle between the Roman Empire and the Germanic tribes. The book begins as a slow burn, becoming an absolute raging inferno with the slaughter of three Roman legions in the Teutoburg Wald in 9 AD.

From the opening pages, Cole lets the reader know an alternate world is at hand with an extract from a letter between a Roman senator and his nephew. It describes the accidental death of 14-year-old Claudius and the funeral oration made by Horace which essayed a world where the boy might have lived and even become emperor. Of course, in our world, Claudius didn’t die in his youth, and at the age of 50 was made emperor by proclamation of the Praetorian Guard. Clearly, something strange is already afoot.

The first prelude is followed by another, this one set on the druids’ holy island, Ynys Mon. There, amidst a great gathering of British tribesmen and druids, a prophecy is pronounced: the gods of the free peoples of the North, both Celtic and German, will soon be in a war against those of Rome. In the North, a mighty warrior and leader called Sigimund will be born. In Rome, an equally powerful man will be born, a son of the imperial household, he will be known “as Germanicus, after his father, who will so name himself for the blood he will shed in the eastern lands.”

Bane of Eagles follows Sigimund, prince of the Cherusci people, son of Segimer, and better known to history as Arminius. In his youth, he and his brother Sigfrud are sent to Rome to train as soldiers and learn devotion to Rome. The Roman dream is that they will return to their people, loyal and trustworthy, and help bring the Germans, like the Gauls before them, under the eagles of Rome. While Sigfrud, called Flauvus (Blondie) by the Romans, will remain forever loyal to Rome, just as he did in the real world, Sigimund will remain loyal to the Cherusci.

Sigimund, an excellent soldier and terrifying fighter, rises within the ranks of the Roman military, winning honors and citizenship during the Pannonian and Dalmatian War (fought in modern-day Bosnia). He becomes fluent in Latin and a student of Roman politics. In particular, he studies the Roman way of war in order to lead German tribal warriors against them to greater effect. He also comes to understand the nature of Roman warfare beyond battlefield tactics.

Whole villages and communities were cut to ribbons — when the legions moved in they spared no one, thinking nothing of killing every living thing, women and children included once they had been abused in other ways; even the dogs were destroyed. Settlements were razed to the ground; crops were burned, after the legions had taken what they needed. War, Arminius learned, was indeed total, and enemies of Rome knew no mercy. Rome’s fist came down implacably.

All the while he is preparing himself for the moment when he will betray Rome. That comes when he is transferred to Germania to assist General Publius Quinctilius Varus in his campaign to subdue the Germans by political enticement or by force. Moving back and forth between his Roman commander and his father and other German leaders, Sigimund begins laying the groundwork for his coup. While among his people, he begins to fall in love with Thusnelda, daughter of the very pro-Roman Cheruscan lord, Segestes. We, like Sigimund, are constantly reminded that for all their lofty rhetoric about Roman law and culture, the Romans are a brutal, imperialist state that enforces its will with sword, fire, rape, and enslavement. Its only real motivation for conflict with the Germans seems to be unquenchable avariciousness.

Cole does a splendid job of providing a sense of ancient culture and beliefs. Except for a few verbal slip-ups — the use of the word gender, as opposed to sex, seems terribly out of place — he never falls into the trap so many modern writers do of holding their characters to the standards and morals of today. Romans and Germans alike do not act like 21st-century people in costumes. They are by turns brutal and noble, brave and cunning, but they are bound by customs and habits different from our own. When Sigimund, with his band of German soldiers, discovers a party of Roman engineers and the dying bear they’d hunted in the lands of a tribe that holds them sacred, he censures and dismisses them after forcing them to leave one man behind. That man is forced to kill the bear as none of the Germans are allowed by belief to do so. Following ritual disposal of the bear’s carcass, the Roman is beheaded. None of the characters is ever depicted with anything sort of condemnation or superiority; they are simply people of a time that isn’t now.

The picture of Sigimund that Cole presents is one of a man so dedicated to his people and his god, that he will give up everything else for them. His love for Thusnelda, a well-drawn character in her own right, is passionate. Even so, he is willing to let that go when she is kidnapped and sent to Rome, as happened in the real world. Cole never makes him a blind-eyed fanatic, but instead, a deeply calculating and driven individual who has been inside of, even a part of, the heart of the Roman monster and knows the depth of dedication needed to face it with any chance of victory. 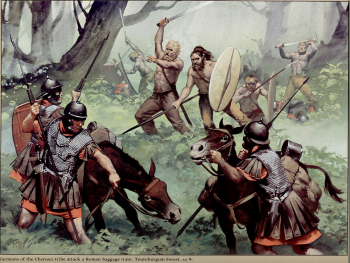 When Sigimund, who swore his allegiance to Germania and to his father by Donar, god of thunder, finally unleashes his storm on the Romans the book becomes an unrelenting torrent of clashing swords, battle cries, and fields awash in blood. I’ve read enough other work by Cole to know he’s capable of writing many different things in many different tones, but he’s hit a high point here. The gradual destruction of Varus and his three legions is a breathtaking display of carnage.

As the soldiers attempted some sort of defensive line against the seemingly demonic forces in the forest, they found themselves attacked by bands of warriors who raced down upon them, wrought havoc with their axes and long spears and then leapt back into the trees. It was impossible to defend against them by creating the segmented shield formation of the testudo that was usually so effective. There was simply not enough room and the press of bodies, fuelled by sheer panic and terror, cramped every effort. Men trampled each other, shrieking helplessly, while the tribesmen howled like beasts of the forest, almost drowning out the roaring of the wind. Mud churned, thick with blood, heads and limbs were hacked off with almost casual abandon and the stench of death rose up from the column, a nightmarish miasma. Lightning forked across the heavens, crackling like the laughter of a god and to the Romans, they felt as though their own had deserted them.

Up until the great battle, most of the book had followed the tack of history. At its conclusion, the very nature of the book, not just history, takes a sharp turn. Hints of the supernatural become more than hints. Possession of the golden eagles of the three legions destroyed in the battle takes on clearly occultic significance and becomes increasingly important as the novel proceeds. Ghostly warriors, summoned by a witch, accompany Sigimund to the Battle of Idistaviso. In our world, that battle was a tremendous Roman victory; in Bane of Eagles, aided by his spectral forces, Sigimund defeats Germanicus and his army, driving them from the field. Later, when Sigimund is betrayed and captured he is saved by divine intervention. 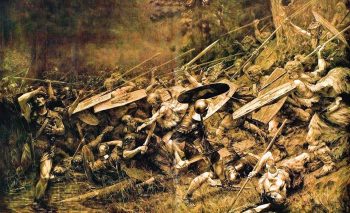 What follows is a series of escapades as Sigimund is forced to flee his homeland. Driven forward by portents delivered by Donar, the exiled prince makes his way for Ynys Mons and the fulfillment of his destiny as the hammer of Rome. With each event, Cole exposes more and more of the unnatural events that underlie the saga he is telling. Plots within plots are revealed and mightier forces than mere men begin to make their presence known. This is great stuff and a good example of why Cole should be considered one of the best sword & sorcery writers around.

Much of the first half of Bane of Eagles is about Sigimund building alliances between the separate German tribes and setting up the Romans. My knowledge of Roman history is wide but thin, nonetheless, this part of the book largely appears to follow the known set of facts regarding the lead-up to the battle in the forests and bogs of Germany. To be honest, I found this portion of the book slow-going. At times, I was almost as lulled as Varus was by Sigimund’s deceptions into thinking nothing was going to happen. I even began to question why Cole had set out to recast history if it was going to resemble history so closely. By book’s end, following pages and pages of bloodshed and thunder, with the prospect of two more books to come, the beginning section takes on a different tenor, surprisingly subtle in nature. Despite the druids at the beginning, for much of the time, the book appears to be nothing more than an extremely slightly alternate history of events on the German frontier. As what’s really going on is revealed — including a nearly last page reveal that about changes the entire story — I was thoroughly hooked. When I finally set it down, I was primed to read the next two books right now!

Unfortunately, I cannot; DMR Books hasn’t released them yet. The next two books, the second of which is being written right now, I’ve been assured by Adrian Cole himself, are titled Germanicus, Lord of Eagles, and Boudica, the Savage Queen. Those titles alone should be enough to whet anyone’s appetite for them.

Just started a Masters of Rome by Colleen McCullough re-read, this looks like it will be right up my topical alley when I finish. A sword and sorcery story of savage Boudica, that sounds excellent in prospect.

Definitely! I’ve always been curious about McCullough, but it seems like way too many pages at this point in my life