Three days ago I wrote a quick piece about a pair of late 90s Ace paperbacks by Cary Osborne, Deathweave and Darkloom. The thing that first attracted my interest — as it often is — was the great covers for both books, in this case the work of the talented Spanish artist Luis Royo. Royo got his start in Heavy Metal in the early 80s, and by the mid-90s was a fixture on SF and fantasy book covers in the UK and US. IMDB credits him with well over 300 covers, for every major book publisher, including Bantam, Tor, DAW, Roc, Ace, Questar, Avon Eos, Pocket Books, HarperPrism, the Science Fiction Book Club, and many, many others.

Royo has a distinctive style, one well suited to selling adventure fantasy, and he helped launch the career of several major genre writers of the era, including Julie E. Czerneda (with her Trade Pact novels), Walter Jon Williams (Hardwired), David Gemmell (Druss the Legend), Elizabeth Haydon (The Rhapsody Trilogy) Sara Douglass (The Wayfarer Redemption), and many others.

Royo was also the cover artist most closely associated with the magazine Realms of Fantasy, which published nearly a dozen of his covers in the late 90s and early 00s. In later years, as it began featuring more blockbuster movies, it moved away from Royo and cover art in general and, for all that the media tie-ins helped connect with a wider audience, I still feel the magazine lost something in the process.

During what I think of as the Royo years, RoF championed powerful women on their covers, in an age in which beautiful women were traditionally relegated to roles as princesses and helpless maidens. Warriors, thieves, archers, and sorceresses, Royo drew his women with power and confidence, and in full control of their abilities, and in the process helped change modern fantasy art for the better.

Many of Royo’s Realms of Fantasy covers, and especially his early ones, were repurposed versions of his earlier fantasy work. His October 1997 and April 1998 covers, for example (see the first row, above), were both adapted from the work he’d done a decade prior for Ace Books, depicting the ex-slave Raven from Richard Kirk’s 5-volume sword & sorcery series Raven (see below).

The Raven novels by “Richard Kirk” (Robert Holdstock and Angus Wells): Swordsmistress of Chaos, A Time of Ghosts,
The Frozen God, Lords of the Shadows, and A Time of Dying (Ace Books, 1987-1988). Covers by Royo

“Richard Kirk” was the shared pen name of British fantasy author Robert Holdstock — author of the Berserker novels (as Chris Carlsen) and, under his own name, the acclaimed Mythago Wood and its sequels — and Angus Wells, writer of the Book of the Kingdoms trilogy and the Godwars series. Holdstock and Wells co-wrote the first two books, and then traded off. Wells penned books three and five, and Holdstock book four.

Royo’s cover for the October 1998 issue of Realms of Fantasy, featuring a woman on horseback, was originally used as the cover of the DAW anthology Warrior Enchantresses two years earlier. His December 1999 and October 2001 covers were first published as part of card sets.

His later covers, from 2002 and on, were original to Realms of Fantasy.

As I mentioned in my Cary Osborne article, Royo has an obvious fascination (you could say obsession) with the female form. But if that was the limits of his gifts, he wouldn’t have achieved the stature he enjoys today. 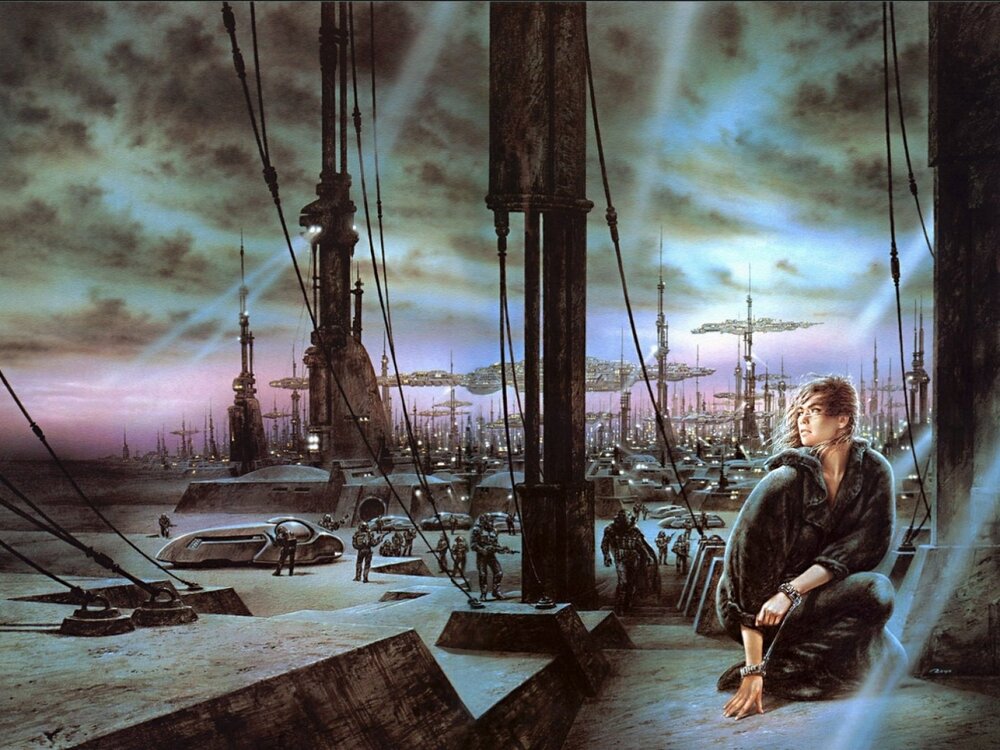 I first noticed Royo in the late 90s, when he did a series of covers for a new Canadian SF writer named Julie E. Czerneda. The wraparound covers he did for A Thousand Words for Stranger and Ties of Power were exotic and gorgeously colorful, portraying truly alien environments in eye-catching and original ways. It was immediately clear to me that here was a unique talent, someone who understood the visual language of science fiction and fantasy, with its love of adventure and the exotic, and yet who strongly centered his work on people.

The other striking aspect of Royo’s work was that even in these two pieces, tension-filled scenes featuring weapon-wielding aliens and vast overawing architecture, powerful women still commanded the stage. Under threat, yes; bound, perhaps. But helpless? Absolutely not.

The women in Royo’s paintings are in command. In command of the moment and, especially, their own destinies. There’s no one in the foreground — or even the distant background, for that matter — standing by with a rescue. Royo women don’t need a goddamn rescue, thank you very much. Step aside, gentlemen. These women have shit to do. 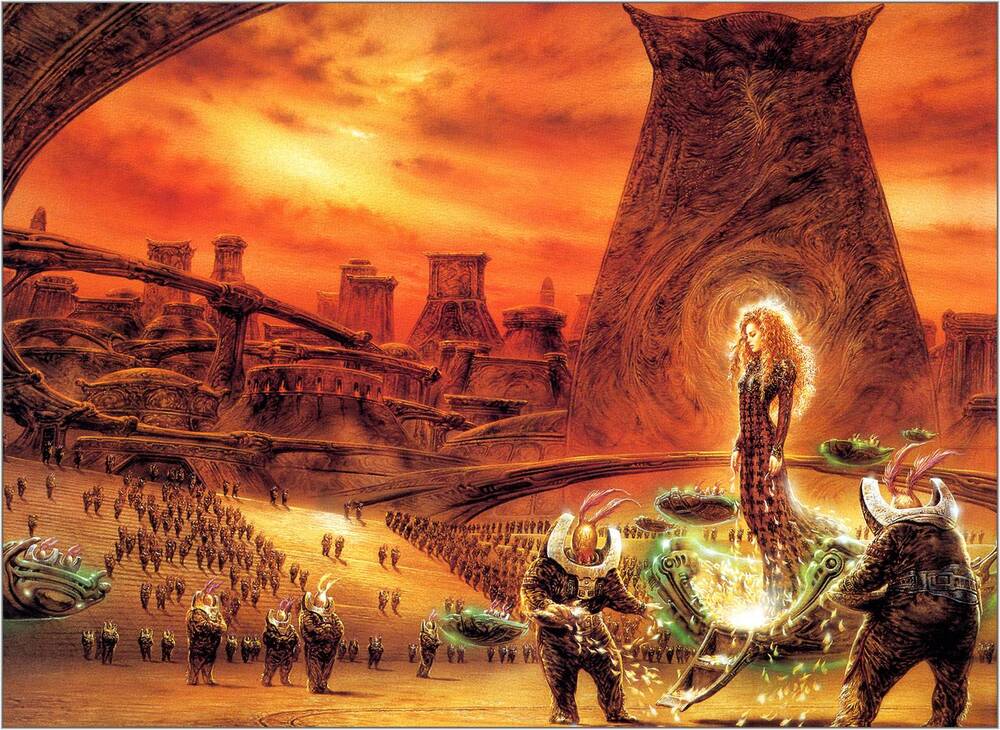 Royo women exercise power, and do so easily. Martial power, political power, sorcerous power — and yes, sexual power. There’s nothing mutually exclusively between those domains. In a Royo painting, women really do have it all, and they’re not shy about celebrating it. I think that’s a good thing.

One thing I have to remind myself when I look at a Royo is that I’m viewing commercial art. Which means it’s not sufficient to draw the eye or titillate. If putting a half-naked male or female on a cover was all it took to sell a novel, trust me, we’ll all be buying paperbacks wrapped in discreet paper bags.

You have to sell the book. Communicate the author’s vision. And you have to do that effectively, and with very limited real estate.

Royo is an author’s dream. His covers are eye-catching and beautiful, and he knows how to tell a story. As evidence, I offer the finished covers above, for the first three novels in Julie Czerneda’s Trade Pact series, cropped versions of Royo’s originals. In addition to being superb works of art, they also function as top-notch book covers that remain true to Julie’s vision.

Royo doesn’t spend all his days in service to the visions of others. He has published a lot of his original art in his personal collections, released by Norma (in Spain) and NBM in the English-speaking world, including Dreams, Secrets, Visions, and others.

Most of these books are out of print, and some are quite expensive, but you can track down copies in out-of-the-way places.

One word of warning: these books are for mature audiences.

See all our recent art on Art and Artists here.

Once a woman came into my regular comic shop and excitedly asked for anything that looked like Luis Royo and I was sure she’d be disappointed because there isn’t a whole lot of comics with that kind of finish. The guy working there suggested 70s Vampirella and a few other things.

I discovered Royo had a book called Dome as I was preparing this article, but I had no idea what it was. I just looked into it, and you’re absolutely right. It was published by NORMA in 2014; here’s the description:

“Luis Royo was commissioned by Muscovite to paint the ceiling of his luxurious new castle. The results: a ton of life-size women! The owner has graciously allowed this masterpiece to be shown to the outside world in this collection.”

Who the heck has a new castle these days?? I think this requires additional investigation! 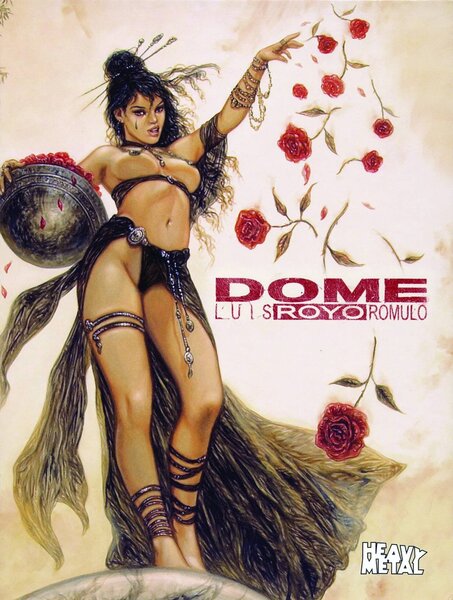 if there was one thing i wished for moat in my life when i was younger, was the ability to draw and paint, which is probly why i have such a love for these covers and all those painters and artists. alas i never had any talent with art. but i still love to look at it.

on a side note, is there a website that catalogs books by the artist cover? so if i want all frezetta covers it sorts them by artist not author etx.?

The Internet Science Fiction Database (ISFDB) lets you search by the artist’s name. It’ll list not only cover art, but any interior art as well. Frazetta’s entry, as well as Royo’s, is quite lengthy so that should be what you’re looking for.

Royo’s entry at the ISFDB is here.

However, I’m not sure it’s exactly what Dante is looking for. It lists all of Royo’s book covers in chronological order. There’s no easy way, for example, to find all the Robert E. Howard books with Frazetta covers.

ISFDB does have an advanced search feature for registered users, and that might work (if you have a registered account).

I’m pretty sure I still have copies of all of those issues of Realms of Fantasy in a box somewhere in a closet!

I don’t have much of a Realms of Fantasy collection. While they loved to feature adventure fantasy and sword & sorcery on the cover, the editors had very little taste for it in the magazine.

Wait wait wait … You’re telling me that the author of ‘Mythago Wood’ also wrote something called ‘Swordsmistress of Chaos’ with a chainmail bikini on the cover? Mind blown. Had absolutely no idea and would never remotely have dreamed this.

Sorry, I know the post is about Royo, not Holdstock. Have always liked Royo’s work and the covers for Czerneda’s novels in particular.

I didn’t know either until a few years ago. Robert Holdstock wrote a highly regarded sword and sorcery trilogy early in his career (Berserker, written as Chris Carlsen, published by Sphere in the UK between 1977-1979). He co-wrote the Raven books with Angus Wells, writing the first two together and then trading off for the last three volumes.

I was sloppy with the details above, and just added a sentence making it a little more clear.

Holdstock’s Berserker original paperbacks are almost impossible to find, but Gollancz published a budget-priced collection of all three in 2014 as past of their marvelous SF Gateway Omnibus line. 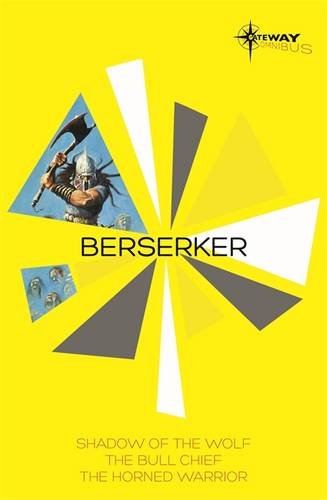