Elizabeth Bear is chiefly known as a fantasy writer these days. She won the 2005 John W. Campbell Award for Best New Writer, and she’s had a hand in more than eight acclaimed series in the years since, including The Edda of Burdens trilogy, the Eternal Sky trilogy, and The Lotus Kingdoms trilogy, all from Tor. When I wrote about her new space opera novel Ancestral Night back in 2019, I quoted the Publishers Weekly review that first got my attention.

Outstanding… Bear’s welcome return to hard SF after several years of writing well-received steampunk and epic fantasy. As an engineer on a scrappy space salvage tug, narrator Haimey Dz has a comfortable, relatively low-stress existence, chumming with pilot Connla Kuruscz and AI shipmind Singer. Then, while aboard a booby-trapped derelict ship, she is infected with a not-quite-parasitic alien device that gives her insights into the universe’s structure. This makes her valuable not only to the apparently benevolent interstellar government, the Synarche, but also to the vicious association of space pirates… Amid a space opera resurgence, Bear’s novel sets the bar high.

While shipping for some Christmas break reading at B&N last week, I laid eyes on the sequel for the first time. The trade edition of Machine was released in July of 2021, and now looks very handsome on my bookshelf next to the first one.

Back covers to Ancestral Night and Machine

Ancestral Night and Machine, together known as the White Space novels, are set in the same universe as Bear’s earlier Jacob’s Ladder trilogy, Dust, Chill, and Grail, published as paperback originals by Bantam Spectra in 2008-2011. Ancestral Night came in second for the Locus Award for Best Novel in 2020 (losing out to The City in the Middle of the Night by Charlie Jane Anders).

Machine follows the adventures of Dr. Brookllyn Jens, a doctor at Core General, a space station that begins to suffer deadly system failures shortly after a rescue team brings back deep space travelers who’ve been frozen in cryogenic sleep for six centuries. Here’s an excerpt from the rave review at Kirkus.

An intricately plotted fusion of science-fiction adventure and conspiratorial mystery… When rescue specialist Dr. Brookllyn Jens — who has dedicated her life to saving and treating any and all species of beings — finds more than 10,000 humans in cryo-containers onboard a derelict generation ship that has been in space for 600 years, she is faced with numerous unanswered questions. How did the ship get to its current location? Why were the passengers turned into “corpsicles”?… Jens begins uncovering some chilling revelations about the purpose of the frozen passengers, the strange craboid walker, and a mysterious virus impacting shipmind AIs…

A page-turning fusion of science fiction and mystery.

I’m not sure why the back cover of Machine claims it’s set in “The same universe as the critically acclaimed White Space series” when, as far as I can figure out, that series consists of exactly one previous book, Ancestral Night. Weird flex, but okay.

In the Author’s Note at the back of Machine, I was delighted to see Bear give a shout out to James White and his classic Sector General novels, and the foundational SF of C.J. Cherryh.

Among its diverse inspirations, this novel owes a debt to the work of James White and C.J. Cherryh, without whose foundational science fiction it never would have been written.

Core General is obviously an homage to Mr. White’s Sector General stories and novels, which I recommend to fans of humane, nonviolent science fiction even today. Some of the social mores in the earliest stories haven’t aged well, but one of the things that has always impressed me about the Sector General stories is that White updated his thinking about gender roles and so forth with the changing times.

My fascination with vast, loosely knit space civilizations and ethical dilemmas probably has no deeper root that the work of Ms. Cherryh. the first science fiction writer I read whose work really made me feel space was big. News traveled slowly in her universe, and ships traveled fast, and lightspeed lag was a real thing that affected space communication and combat. That blew my mind when I was eleven!

I wrote about James White’s extensive science fiction writing in Collecting James White back in 2016. Tor/Orb assembled his Sector General stories and novels in three very fine omnibus collections — which all remain in print, 20 years later. 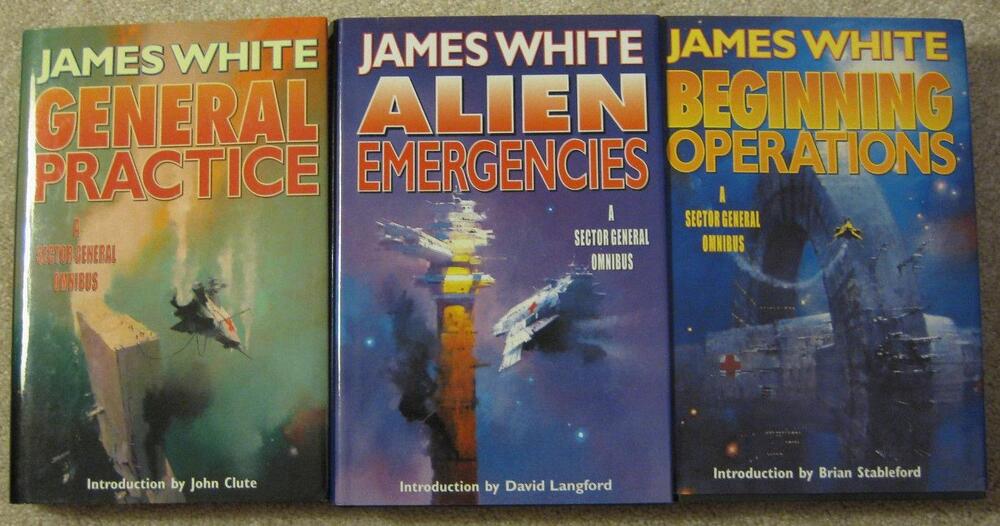 Here’s the complete details on the White Space novels. Both were published by Saga Press.

See all our coverage of the best new SF and fantasy series here.