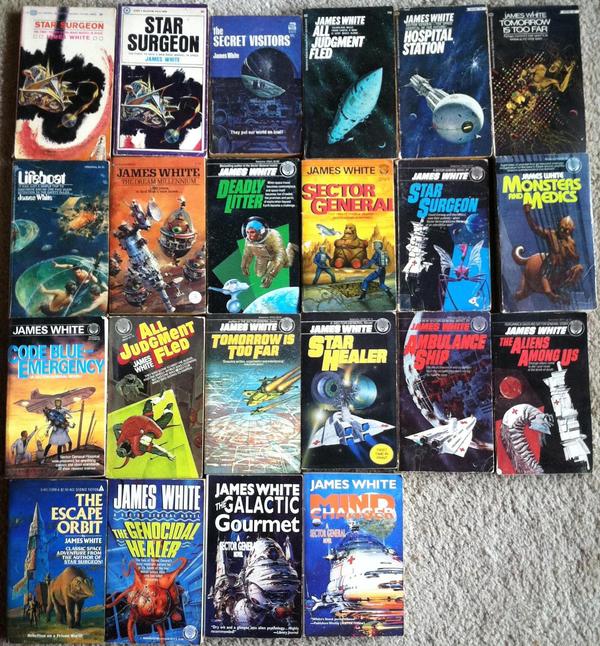 I’ve been enjoying doing a little research on vintage paperback prices… mostly because it involves my favorite pastime, shopping online for science fiction paperbacks. Except now I get to do it, y’know, in the name of science.

What I’ve learned so far hasn’t been super surprising. Robert A. Heinlein is popular. Philip K. Dick is really popular. I guess the biggest surprise is that the #2 man on the list is Karl Edward Wagner, which I didn’t expect (but I probably should have). Here’s a snapshot of what you can expect to pay as you diligently build your SF library, based on a sample of top-condition paperback auctions over the last 2-3 months.

Links will take you to snapshots of the actual auctions I sampled.

Obviously, this isn’t a very scientific poll. Still, it matches pretty well with my own experience selling and buying vintage paperbacks at dozens of conventions over the past decade. Vintage paperback are still very cheap, but there’s quite a price range. And you really should expect to pay more than 10 times as much for a Phil Dick paperback as for one by Arthur C. Clarke.

As in all collectors markets, virtually all the attention is focused at the top of the market, where all the money is. But in my opinion, there really isn’t that much correlation between price and quality. Dick and Wagner were both fine writers, but they also had very low print runs while they were alive — and Dick in particular benefited from being discovered by Hollywood — and the laws of supply and demand dictate the rest.

That means, logically enough, that our attention really ought to be at the bottom of the market, where all the true bargains are. With that in mind, I’d like to turn your attention today to James White, the Northern Irish SF writer who died in 1999, leaving behind some 20 novels and five collections. 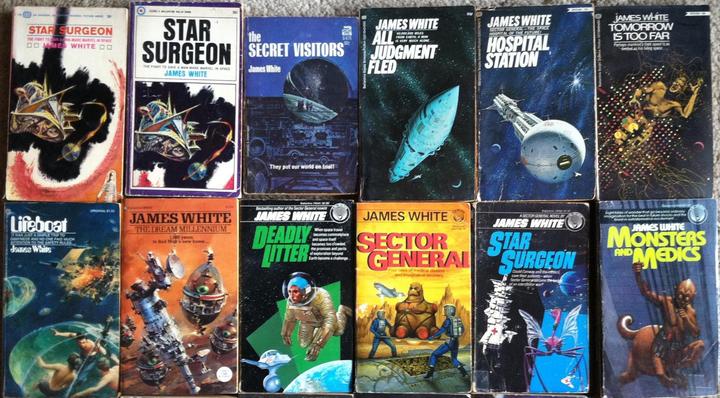 I never read a single James White novel while he was alive, although he had a solid career as a midlist writer for five decades. I discovered him chiefly as a result of the three Sector General omnibus collections released by Orb last decade. Aside from those volumes — which are still in print — virtually all of his books have vanished from store shelves, and there’s little (if any) demand for his back catalog.

How little demand is there for James White? I was able to buy the collection of 24 vintage paperbacks shown at the top of this article (including two duplicates not shown) on eBay on December 14, 2015. I was the only bidder. The price? $5.

Above and below are close-ups of the collection, lying on my living room floor (click for bigger pics). 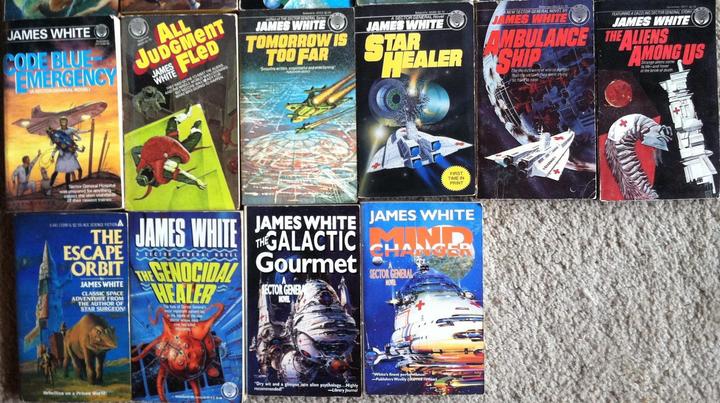 This puts James White at the rock bottom of our sample, at just under 21 cents per book.

So if you’re interested in James White, you can get most of his output for less than what it will cost you to buy a single brand new paperback. That’s the power of bulk purchasing right there.

While his works are largely neglected today, they are not forgotten. His second novel, Second Ending (see the pic above), an upbeat last-man-on-Earth tale which appeared on the flip side of Samuel R. Delany’s The Jewels of Aptor as a 1962 Ace Double, was nominated for a Hugo; The Escape Orbit (1964), which relates the struggles of human prisoners of war abandoned on a hostile planet without tools or weapons, was nominated for a Nebula Award. Mike Resnick described All Judgement Fled (1968), which won the 1979 Europa prize, as “Rendezvous with Rama done right.” 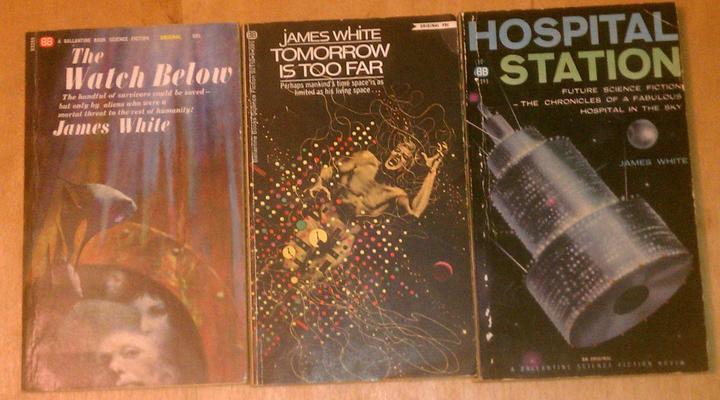 White started writing SF in the early 50s because he and his friends found John W. Campbell’s Astounding Science Fiction too preoccupied with tales of nuclear doom. His first published story, “Assisted Passage,” appeared in the January 1953 issue of New Worlds; he claimed his attempts to break into the American market were stymied by Campbell, who found White’s optimistic tales of inter-species relations didn’t fit his xenophobic views. White remained unknown outside the UK until the 1960s.

White’s first novel, The Secret Visitors, was serialized in New Worlds under the title Tourist Planet in Oct-Nov 1956, and appeared in the US as Ace Double D-237 in 1957, paired with Robert Silverberg’s Master of Life and Death. Apparently the US edition differs slightly from Tourist Planet, as Ace’s editor Donald A. Wollheim felt the original ending was a little weak, and requested that White insert “an all-out space battle” just after the climactic courtroom scene.

In November of 1957 New Worlds published the novelette “Sector General,” set in the giant Sector 12 General Hospital in deep-space, founded to promote peace after humanity’s first interstellar war and staffed with a diverse crew of alien doctors and medical staff. Editor Ted Carnell requested more stories set in the same setting, and it soon became the series for which James White is best known.

White eventually produced a dozen Sector General books, eight novels and four collections, most of which were reprinted in four omnibus collections. Although his other novels are long vanished, the three Orb Sector General omnibus editions remain in print today. The later Tor novels I have proudly proclaim “Over one million Sector General novels in print!” — an astounding accomplishment for any writer. The Sector General novels remain one of the great success stories of light hearted, optimistic science fiction. 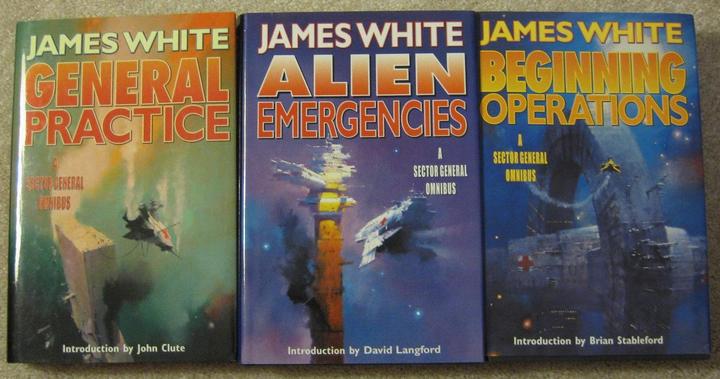 There were a total of four Sector General omnibus volumes, one from the Science Fiction Book Club and three from Orb:

All three covers for the Orb omnibus editions (above) were by John Harris.

White was not a full time writer, which makes his productivity even more extraordinary. He retired from his job at Short Brothers in 1984 when diabetes impaired his eyesight, but continued writing until his death in 1999.

In the US, White’s first publisher was Ace Books, followed by Ballantine and then Del Rey. Del Rey in particular gave his covers a uniform design that was easy to spot; here’s an assortment of his early 80s Del Rey covers, with art by Matt Davis (Deadly Litter), H. R. Van Dongen (Hospital Station), and Wayne Barlowe (Major Operation and Star Surgeon):

White’s last publisher in the US was Tor, who brought out his last few novels, and has kept his Sector General omnibus collections in print through their Orb reprint line.

Most of the pics I’ve assembled to accompany this article come from various eBay lots. Many of them are still available. You won’t always find them priced at 21 cents/book, but James White remains one of the most affordable authors out there. If this article has made you curious, spend five bucks and give him a try. 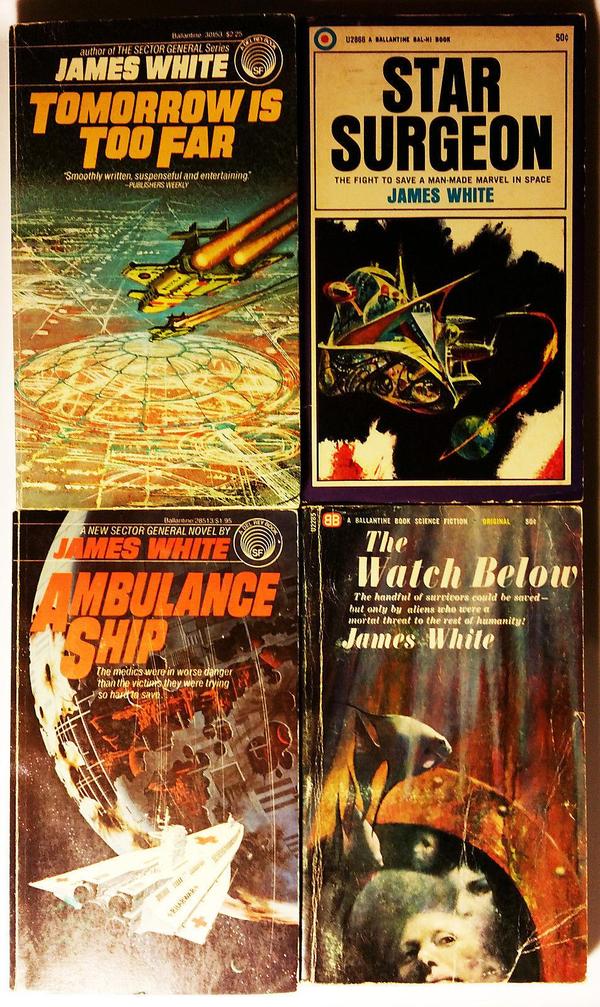 Our previous titles in the Collecting series include:

See all our coverage of Vintage Treasures here.

All of those paperbacks for $5! A mere 21 cents a book! Astonishing! This is your biggest bargain yet! Congratulations! You’re making a wise investment. Most of these books will be hard to find in five years.

Thanks, George. Not as big a bargain as seven SFBC anthologies for around a penny each… I think you still win the bargain-of-the-month award!

I love White’s Sector General books, have a few of the paperbacks you now own and have the omnibus volumes too. I also own the John Harris painting which is the cover of ALIEN EMERGENCIES. More SF readers should discover White’s work, very enjoyable indeed.

I always liked James White and felt that he was a very underrated author. Good find!