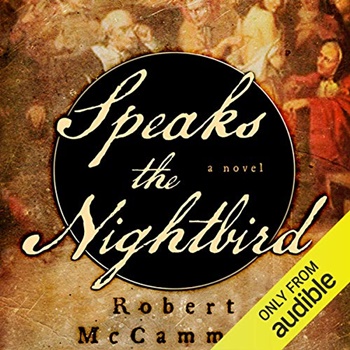 Last week, I talked about what I’ve been watching. I could do another entry on that, but I want to mix it up a little bit. So, this week, I’m gonna talk about five things I’ve listened to, lately. I listen to audio books, and radio plays, when I’m driving by myself. And I can also listen to them during most work days. My mind can listen to them, and focus on my work, most of the time. I’m fortunate that way.

When I have to split my attention, I often listen to something I’ve heard before, like the Dirk Gently broadcast. Or an old radio show.

I wrote this essay about the introduction to my favorite novel of all time: McCammon’s Boy’s Life. It’s simply a tour-de-force of writing. McCammon is the only straight horror author I like. That genre creeps me out too much. King, Lovecraft, Robert E Howard – don’t care for any of their horror stuff. But man, do I love me some McCammon.

One of the genres best-sellers, he wanted to write something different after 1992’s Gone South (that has the most memorable opening line I’ve ever read). His publisher, not wanting the money train to move onto a siding, told him ‘No’ and to keep the horror coming. Denied an outlet for a historical fiction novel, McCammon took his toys and went home. He quit.

He wrote the book on his own, and a decade later, it came out from a small publisher. The ninth Matthew Corbett book is upcoming, and he has also written a few more ‘regular’ horror books. He came back to the industry on his own terms.

Speaks the Nightbird introduces Corbett, a clerk to a traveling Magistrate, as they oversee the murder and witchcraft trial of Rachel Howarth, in 1699. There is a LOT going on, and Corbett, an inexperienced young man, learns much about life.

It’s an NSFW book (I listened to the audio book – just a warning there), but it’s excellent. McCammon’s time off did not diminish his skills in the least. It’s a complex plot, and I didn’t see things coming. The narrator was quite good. I plan on continuing the series, with The Queen of Bedlam the next title. I think that Robert R. McCammon is a world-class writer, and I’m pleased to have a ‘new’ series to explore.

UPDATE 9/29/22 –  I just used my latest credit for the next book, Queen of Bedlam. Excited to continue on. 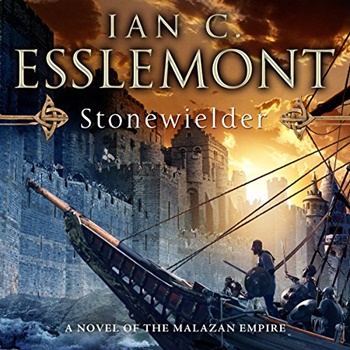 Stephen Erikson and Esslemont created the world of Malazan for their RPG game. Erikson would turn it into an epic, ten-book, Wheel of Time-size, sprawling saga, The Malazan Book of the Fallen. The average mass market paperback was over 1,000 pages. I’ve read the first eight, and have the final two on my shelf. Just saving them for the right time.

The series is rather dark, and I took a break after reading two in a row. Some unpleasant stuff happens. But quite simply, it’s amazing. If you like dark fantasy, this stands alongside Glen Cook’s The Black Company, as my favorite. And Malazan is far more grand, complex, and in-depth. Stunning world building, and terrific stories.

Midway through the series, Esslemont started writing some independent novels, which fit in the Canon. I read the first two, and quite liked them. Esslemont’s writing style is different than Erikson’s but it works. I decided to use an Audible credit and listen to his third book. It actually fits in after book nine of Malazan – so I listened to it a bit out of order. I don’t think this will be a problem, though.

The story builds on his prior novel, Return of The Crimson Guard. It both explains some of what had been mentioned before, and it expanded the story. As with every Malazan book, there are many story threads to follow. You definitely need to pay more attention than with a ‘normal’ audio book.

I liked this book, and I’ll read Esslemont’s other three, after I finish Erikson’s remaining two. Each man has written a prequel series, but I haven’t looked into those at all. I am a Malazan fan, and I like Esslemont’s additions to the saga. 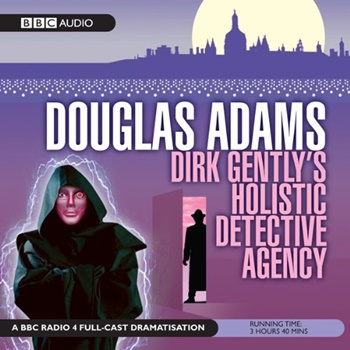 I am a Hitchhiker’s Guide to the Galaxy fan. But this is actually my favorite Douglas Adams book. Gently is England’s leading – and likely only – holistic consulting detective. He believes in the fundamental interconnectedness of everything. Which he uses as a lever to pry money out of gullible clients. It’s one of my favorite books, and I’ve read it a couple times. I used to have it on cassette, read by Adams himself. And I do have a terrific BBC radio play version, with Billy Boyd (Pippin, LotR), which I listen to every couple of months. And I just did so again last week. Love it.

Though it’s not available in the US, there is an audio book read by Stephen Magnan, who starred as Gently in a very good BBC miniseries. As opposed to the utter trash that was the Elijah Wood version.

This is one of my favorite radio plays. Adams wrote a sequel, The Long Dark Tea Time of the Soul (GREAT title) which is good, but not great. That BBC radio play is more freely adapted. I am currently listening to an audio book of that one.

I am a huge fan of the movie, Blade Runner. I quit Blade Runner 2049 partway through – it was not good. I LOVED the Blade Runner computer game, which needs to be remastered (that’s an ugly story). And I read K. W. Jeter’s terrible sequel novels. Which brings me to the original Philip K. Dick novel that the movie based on: Do Androids Dream of Electric Sheep?

I read it way back when the movie came out. I thought it was okay. I am currently listening to it as an audio book. It’s got a lot of stuff that movie dropped. And the movie changed several things. Quite frankly, for the better. This is confirming for me that the movie is far superior to the book. As if the book were a good idea, but not executed as well as it could have been. And the movie got it right.

I’m not saying it’s a bad book, but I don’t find the story nearly as absorbing as I do the movie. It feels cluttered, and I’m not interested in parts of it.

I’ve read the first two Corbett books so far and I’m looking forward to reading the rest. The second book is a bit pulpier than the first one (and it looks like that vibe gets stronger in the later books), although still very rich in period detail.

Cool! I like that Corbett isn’t some superhero guy. He’s young and inexperienced. And flawed. But sincere. McCammon really is an amazing writer.

one of the major setbacks i see about you Mr. Byrne, the fact you dont like BR 2049 :p
i love everything blade runner, the comics are especially good these days, and now we have the new 2099 tv show coming… i guess it’s a reason to try and stay alive to see how good or bad that will be.

and now i see you didnt like Andor either, which the first 3 episodes remind me more of blade runner then star wars… you are losing points quick :p

Ha. Only watched episode one of Andor so far. I was bored. We’ll see how two goes. I’m enjoying She Hulk, and the latest season of Lower Decks, much more than that episode.

So, did you like K.W. Jeter’s three sequel novels? As I recall, one wasn’t very good. TWo was SOOO bad, I’m pretty sure I skipped number three.

But the original movie – harboiled noir. Just absolutely spectacular. Definitely in my all time Top 10 Movies.

And the computer game really was REALLY cool.

never tried the Jeter sequels, though i enjoyed all the Tek novels so i wonder how bad they would have to be for me to really dislike them, hahaha.