Over the decades we’ve spent a lot of pixels at Black Gate talking about Lin Carter’s groundbreaking Ballantine Adult Fantasy series. He was under contract to produce a book a month for editors Ian and Betty Ballantine, and that’s exactly what he did for five years and 65 titles, almost all reprints of out-of-print fantasy novels and original anthologies. For the most part my favorites are those marvelous anthologies, including The Young Magicians, Golden Cities, Far, Discoveries in Fantasy, and others.

In 1972 and 1973 Carter produced the first two volumes in what he’d hoped would be an ongoing series, Great Short Novels of Adult Fantasy. They each included four novellas, accompanied by his usual fine introductions, and it’s a tragedy he was unable to produce any more before the Adult Fantasy series was discontinued when Random House bought Ballantine. In his opening essay, Four Worlds of Wonder, Carter explains his focus on longer fantasy.

Here’s an extract from his intro.

It has been three years now since Ballantine Books first invited me to select classic fantasy novels and books of short stories for revival in this Adult Fantasy Series. In so doing I had reluctantly passed over certain stories simply because of their awkward length.

I refer to the short novel of twenty of thirty thousand words — the so-called “novella.” Since most of the books we have been publishing under the Sign of the Unicorn’s Head average around eighty or eighty-five thousand words, obviously a novella is just too short for our use.

Every year I have assembled an anthology of wonder literature for Ballantine — books such as The Young Magicians (1969) and New Worlds for Old (1971). In such cases as these, a novella would be — not too short, but — too long. Were I to include many novella, I would not have enough room for a broad selection of short stories.

Great Short Novels of Adult Fantasy represents an ideal compromise and a perfect solution to this problem. With a little judicious balancing, I can fit at least four such short novels together in one book. The initial result is now in your hands, and it is the first of what I envision as a series of annual collections.

The range of the stories in this first anthology is rather surprising. One of the stories, that written by Anatole France, is the work of a Nobel Prize-winning French litterateur; another tale, by Fletcher Pratt and L. Sprague de Camp, is a humorous adventure yarn drawn from the lowly pulp magazines of yore. A third story is the work of a British novelist of the last century, while a fourth comes from a popular American writer of the 1920s.

Sadly, only one additional volume of Great Short Novels of Adult Fantasy appeared the following year, before the Ballantine Adult Fantasy Series was terminated by the new corporate owners in 1974.

Nonetheless, the two volumes we have are definitely worth celebrating, and well worth reading today.

“Wall of Serpents” was paired with another Harold Shea novella (“The Green Magician”) and published in paperback by Dell in 1979 (see above).

“The Hollow Land” was reprinted just two years earlier in the short-lived Forgotten Fantasy magazine, edited by Douglas Menville and Robert Reginald (see below). If you’re a fan of classic fantasy, all five issues are well worth tracking down. 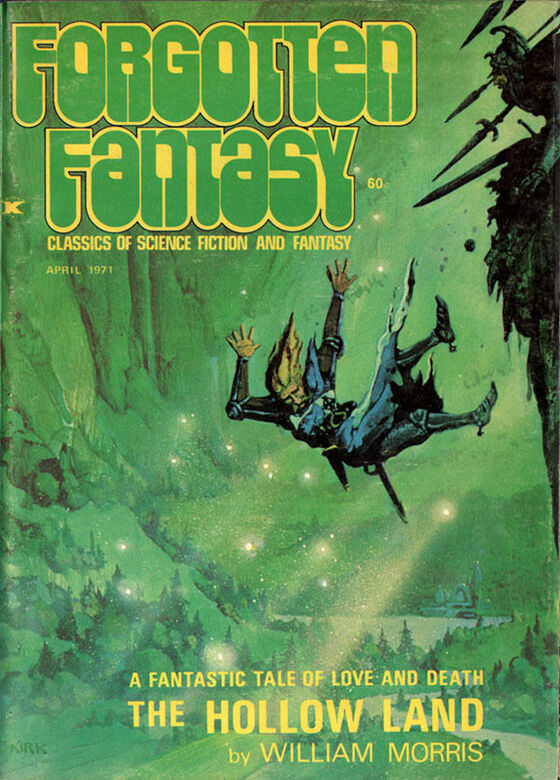 Volume Two of Great Short Novels of Adult Fantasy contains The Lavender Dragon, a complete novel by Eden Phillpotts from 1923, and the classic “The Repairer of Reputations,” part of Robert W. Chambers  famed King in Yellow sequence, plus novellas by George MacDonald and Ernest Bramah. Here’s the TOC.

Four Worlds of Wonder by Lin Carter
“The Woman in the Mirror” by George MacDonald (1858)
“The Repairer of Reputations” by Robert W. Chambers (1895)
“The Transmutation of Ling” by Ernest Bramah (1900)
“The Lavender Dragon” by Eden Phillpotts (1923)

Ace Books reprinted all ten stories in The King in Yellow sequence just a few years later in 1977, in a handsome paperback edition with a striking cover by Stephen Hickman (see below).

Here’s the complete details on both volumes

Both books were published as paperback originals by Ballantine, with covers by Gervasio Gallardo. The first volume has been out of print for nearly 50 years, and there is no digital edition, but strangely enough Wildside Press has print and ebook editions of Volume II.

Our past coverage of the Ballantine Adult Fantasy Series includes:

Over the past few months I’ve been filling some of the holes in my BAF collection, mostly the anthologies that Carter put together – Dragons, Elves, and Heroes, Discoveries in Fantasy, and Golden Cities, Far are a few of the titles I’ve recently picked up. Nice copies are still out there to be had, for not much money. I haven’t gotten either Great Short Novels volume, but I’m sure I will eventually.

It’s a pleasure to see that copies of the wonderful anthologies in this series are still available for less than the price of a new paperback.

I bought both of the books I scanned for this article (both unread an in near mint condition) on eBay last month for $8 total.

I’m guessing Wildside has Great Short Novels II available because all of the included stories are old enough to be out of copyright. Ditto Discoveries in Fantasy, another BAF anthology that they’re currently offering.

Joe — you’re almost certainly correct. I should have figured that out on my own. 🙂

And now I’m thinking something I’d really like to see from Wildside is a collection of all of Carter’s BAF introductions, maybe combined with a reissue of Imaginary Worlds.

Ace had reprinted THE KING IN YELLOW in a small-format paperback in the early ’60s; it had a Jack Gaughan cover based on the cover design of the F. Tennyson Neely first edition published in the 1890s.