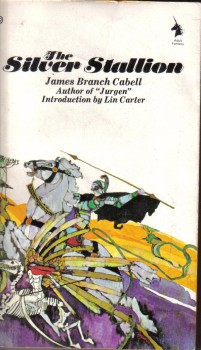 Niafer and Horvendile gather the members of the Fellowship of the Silver Stallion together for the purpose of disbanding them. Horvendile reminds them that this has been prophesied. He also pronounces upon them the dooms that will eventually befall each of them.

As you can imagine, this isn’t well received by most of the group. The rest of the novel is divided into books, essentially novelettes, describing what happens to each of the members of the Fellowship of the Silver Stallion.

As there are nine of them, I won’t try to describe what happens to all of them. One is killed on the battlefield along with a Viking he is fighting. The angel sent to take him to the afterlife and the valkyrie sent to take his companion grab the other’s target. So a Viking ends up in Heaven, while a Christian spends eternity in Valhalla.

One member of the group is a delinquent demon who has to convince Satan to let him keep living the life he’s been living for several millennia. One loses his head while courting a queen. One sorcerer finds himself in a position where he has to choose between his wisdom and his wife. (Cabell seems to have an extremely cynical view of marriage.)

The one member of the Fellowship I will talk about is Coth of the Rocks, since two “Books” in the novel are devoted to him, whereas the other characters only have one. This may be because his son Jurgen makes several appearances in the novel, as well as having a novel named after him.  Coth is a blustery, belligerent, womanizing reprobate who goes in search of Manuel, whom he worships. Since Manuel was last seen heading west, that’s the direction he takes.

He eventually lands in what is supposed to represent Central America. After offending one of the local gods named Yaotl, he ends up selling peppers in the local market while nude and catches the eye of the king’s daughter. He ends up marrying her, although there is some duress involved. The marriage is a happy one for the bride and groom, not so much for everyone else.

Here’s an excerpt in which the nobles petition King Vemac to do something about his son-in-law:

“For there is really,” they said, “no standing him or his tantrums.”

“Such,” Vemac replied, “has been my own experience. I am afraid, though, if we kill him, my daughter will be put out, for she seems to have discovered about him some feature or another feature of great and unfailing attractiveness.”

“It is better, majesty, that she should weep than that we all be driven mad. The man’s pride and self-conceit are unbearable.”

“Nobody knows that better than I do. He hectors me in my own palace, where I am not accustomed to be overrun by anybody except my daughter. In such a position we must be politic.”

This is a prime example of the humor Cabell uses, and I found it quite to my liking. Unfortunately, not all of the sections are intended to be humorous, or at least consist of this type of humor.

You can see in this selection the innuendo and what is a clear phallic reference. As the book went on, I found this sort of thing, of which there is much, to become tedious.

On the whole, I liked The Silver Stallion. Its structure was such that it was a fairly quick read and in many ways was more of a short story collection than a novel. There were places where Cabell was making reference to some of his other works.

On the other hand, it’s quite sacrilegious in places. As a person of faith, I didn’t care for some of those passages. I also got tired of the innuendo towards the end. It was easy to see why some people like Cabell so much, but it was also easy to see why he isn’t everyone’s cup of tea.  I’ll read at least some of the other Cabell titles Carter selected.

Lin Carter clearly enjoyed Cabell, as he included six of Cabell’s books in the series, three in the first year the unicorn’s head colophon was used. The one book he didn’t reprint was Jurgen. This is the book that got Cabell hauled into court on obscenity charges. It seems there were a few too many phallic references in it for John S. Sumner, a self-appointed monitor of decency who headed the Society for the Suppression of Vice. Cabell won the case, by the way, and later thanked them for increasing his sales.

I suspect this omission of Jurgen from the Ballantine Adult Fantasy series was because Jurgen was in print from another publisher. According to Carter’s introduction, Jurgen hadn’t been out of print since the trial. 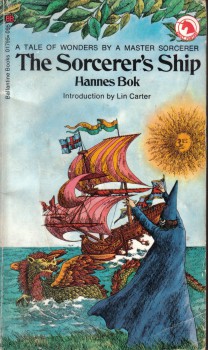 The next two volumes in the Ballantine Adult Fantasy series are anthologies. I’m going to skip them at present, although I intend to come back to them later. The one after that is Figures of Earth, the second BAF Cabell title.  I’m going to jump to the following book, The Sorcerer’s Ship by Hannes Bok.  Join me, won’t you?

I did enjoy Silver Stallion (and all the other BAF Cabell I read), but I can see how a little of his work could go a very long way — reading one book every year or two seems more than sufficient.

I like these postings on the BAF series, but was never interested in Cabell, based on reading “The Way of Ecben” in The Young Magicians, and Jurgen. The attention given to Cabell by Carter’s selections was one reason I never attempted to collect the entire series. I do generally feel that I should intend to read the book (or should have read it in a library copy, etc. already) if I’m going to buy it.

Joe, there were parts I enjoyed more than others. Because the characters and tone changed with pretty much every section, I’m still somewhat on the fence about Cabell. You’re right that a little could go a long way.

Major, I’m glad you’re enjoying the BAF series I’m doing. I will probably read one other Cabell, but I’m going to hold off on him for a while. The variety in the series picked up after the first two years, and there are some intriguing authors and titles I’m looking forward to getting to.

Cabell is not to the modern taste, true, but he was at the center of the mainstream literary world in a way very few fantasy writers have managed before or since….

His highly mannered, arch, and allusive writing certainly has had descendents — Leiber, Vance, maybe Wolfe, Heinlein called Stranger in a Strange Land a Cabellesque satire, Gaiman credits Cabell in Sandman — and besides:

He wrote a 25 volume multi-generational fantasy that requires a forty-page genealogy to straighten out! Took him ten years…

I’m not that up on my genre history, but isn’t that a first? For good or bad, of course.

Tulkington, as far as I know, that’s a first, although Tolkien would probably created something similar if he hadn’t spent so much time revising.

I had an opportunity to pick up a number of Cabell’s books in a matching hardcover set back in the year (mumble, mumble), when I was in graduate school, but didn’t have the funds.

The anthologies are some of the strongest entries in the series, and some of the few I revisit… depending upon the anthology. Certainly don’t skip Golden Cities, Far, or the other three that are basically Carter taking a selection of stories and using them to talk about the history of fantasy…