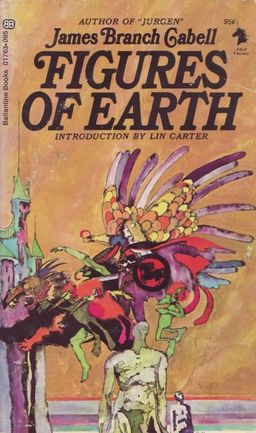 Okay, this one is probably going to be the last Cabell I read for a while. It turned out to be more of a slog than I expected. I’ll elaborate below.

Figures of Earth was the second volume of James Branch Cabell’s Chronicles of Fabled Poictesme, published as part of the Ballantine Adult Fantasy series. It is the story of how the swineherd Dom Manuel came to be the Count of Poictesme.

Poictesme is of course a fictional province in France. Cabell freely mixes real and imaginary locations in his work.

The story begins with Dom Manuel leaving his pigs to rescue the kidnapped daughter of a count from the sorcerer Miramon Lluagor. He hasn’t really been paying much attention to the pigs. Instead he’s been making human figures from clay because his mother told him from her deathbed that he should make a figure in the world. I suspect he misunderstood what she meant.

Anyway, Manuel sets off on his quest. Along the way, he meets the young woman Niafer, who is the one who actually gets them through the various magical traps along the way. Once they reach the sorcerer’s castle, they learn that things aren’t quite what they seem. The quest to rescue the princess is actually Miramon’s idea. She’s his wife, and he’s tired of her. Manuel and Niafer manage to reconcile the couple and start back down the mountain.

At the bottom of the hill, they are met by Grandfather Death. He is riding a black horse and has a white horse with him. Grandfather Death says that one of them must ride his white horse. Dom Manuel promptly volunteers Niafer to be the rider. She goes to her death without protest.

Figures of Earth is divided into five books with financial titles, such as “The Book of Credit”, “The Book of Surcharge”, etc. Each one describes a phase of his life. Manuel meets and loves two witches, first the Princess Alianora and then Freydis, who gives up immortality for him. In both relationships, he keeps telling the women about Niafer and how much he still loves her.

Manuel uses the magic he learns to eventually bring one of his clay figures to life. The figure promptly runs off into the night, but he returns later to cause trouble.  After that, Manuel passes into the paradise of the pagans (Niafer was a pagan) and makes a deal to bring her back to life in a clay representation he has made of her. He has to stay there as a servant for a month, and for each day he is there, he ages a year. So by the time he has finally managed to win his love, he is now a middle aged man.

Manuel and Niafer aren’t a good match, and she turns into something of a nag. Manuel wants to wander the world. Niafer says she would rather he settle down because of what people might, not because she has a desire for creature comforts.

During his earlier wanderings and adventures, Manuel acquired the title of Count of Poictesme. A Count shouldn’t be wandering the countryside. He just has to take possession of it. This isn’t as easy as it sounds as it’s been overrun and conquered by invaders. Manuel and Niafer spend a great deal of time wandering.

After spending time with Freydis on her island – yes, Manuel seeks aid for himself and his wife from the woman he threw over for his wife – he eventually regains his kingdom. While they are with Freydis, he and Niafer start a family. Manuel has struck a bargain with a stork he rescued earlier in the book, and the stork begins to bring the agreed upon children.

Eventually, after becoming a messiah type figure, Manuel and Grandfather Death ride off into the sunset.

You hear a lot in some circles about Cabell’s work being full of double entendres and sexual talk disguised as something else. I only noticed one portion of the book where that happens. I’ll not quote it because it’s somewhat long, and the double meanings are scattered throughout.

Figures of Earth held my interest at the beginning and at the end because it was mostly in these places that there was a story. The middle was where I struggled.

As long as Manuel was doing things, I found the story interesting. Unfortunately there are long passages of talk that essentially are nothing more than philosophical treatises.

Cabell also makes mention of a number of battles and heroics deeds done by Manuel and his companions. These are almost always summaries, if not mere passing references. I would much rather read about Manuel’s deeds of heroism than several pages of his musings.

I realize that Cabell set out to write a book that was a satire. He was more interested in making statements, whether that statement is about marriage, love, duty, or whatever was on his mind. And I think in this regard he succeeded admirably. What he didn’t intend to do was broaden the field of heroic fantasy.

Part of the problem I had with this book, and to a slightly lesser degree The Silver Stallion, was that Cabell’s sentences are complicated things requiring concentration. Most of my reading, at least while reading these two books, was done late, usually before going to bed. This would account for why I had trouble getting through the book, but only partly. The other is I was hoping for something a little more along the lines of heroic fantasy. 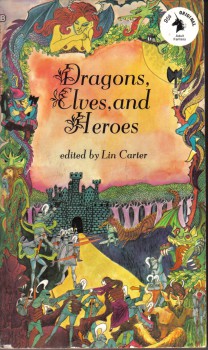 I don’t think I want to tackle another title of Cabell’s for a while. Quite a while. The High Place is the next one in the sequence, falling between Land of Unreason and Lud-in-theMist. I’m going to give it a pass.

I’m still going to fill in some of the books I’ve skipped. Next time I’ll look at Dragons, Elves, and Heroes, edited by Lin Carter. It’s an anthology of old fantasy, with excerpts from Beowulf, The Volsunga Saga, and things like that.

Lin Carter and the Ballantine Adult Fantasy Series
Lilith by George MacDonald
The Silver Stallion by James Branch Cabell
The Sorcerer’s Ship by Hannes Bok
Deryni Rising by Katherine Kurtz
Land of Unreason by Fletcher Pratt and L. Sprague de Camp
The Doom that Came to Sarnath by H. P. Lovecraft
The Spawn of Cthulhu edited by Lin Carter
Lud-in-the-Mist by Hope Mirrlees

I liked Cabell myself, but I can see how he’s a bit of a marmite writer (I love that expression!) so if you’ve tried two and didn’t enjoy them, then you’re probably correct to stop.

One thing that really leapt out at me when I read my most recent Cabell (The High Place) — once you got beneath the flowery language, it was one of the most profoundly cynical books I’d ever read.

Will be very curious to hear your take on Dragons, Elves and Heroes.

The only Cabel I’ve read is Jurgen, and while I would say that it was a worthwhile book, modern readers should know that his books aren’t fantasies in the sense we mean when we use the word today. If you go into them expecting anything remotely like Tolkien/Jordan/Martin etc. you’re bound to be frustrated and disappointed. Action and world-building was not what he was about.

Popping my head up to once again espouse the merits of Cabell. For a bit more: http://www.kenlizzi.net/james-branch-cabell-an-appreciation/

Joe H., Cabell is extremely cynical. When he’s mixing his cynicism with humor, he’s not bad.

Thomas, I’m planning on giving Jurgen a try at some point, but since it wasn’t published in the BAF line, it’s not currently high on the priority list.

I think I need to adjust my expectations of Cabell. There are passages I thoroughly enjoy. Then there are others that just don’t do anything to me. I think I’m looking for more of a narrative that tells a story in the manner of contemporary fantasy. As you point out, that’s not what you get with Cabell.

Ironically, Jurgen is one of the ones I still haven’t read yet — so far I’ve only tackled the books he had in the BAF. Someday …

Around this past Christmas holiday I decided I was going to read all of the JBC titles in the BAF series as well as Jurgen. I got through The Silver Stallion, Figures of Earth, and The High Place, and I started Cream of the Jest and then petered out.

In certain moods I appreciate Cabell’s wit, cynicism, and satire. But after three volumes of reading this stuff I pooped out. I needed a break. At some point I’ll go back and finish the other JBC titles in the BAF series as well as Jurgen, but not for awhile.

In some ways Cabell’s fantasy elements are rather superfluous to his storytelling. It seems to me that he could make similar cynical and satirical points in other sorts of settings.

Also, his fantasy world is something of a D&D universe: just a mashup of different mythologies and legends. Different, but interesting.

I suggest you reconsider the idea of skipping The High Place, which is to me the second best Cabell book after Jurgen.
And yet I must agree – Cabell must be taken in small doses, no more than one novel a year: his cynicism and his wit can at time be a little too much (but they appealed to my adolescent self).

Ken, thanks for the link. I’ll check it out.

James, I agree with you about Cabell’s fantasy elements. I get the feeling at times that he’s sticking them in so he can make a cynical point about something without any real organization to them as far as internal consistency is concerned.

Davide, I’m willing to give The High Place a try, but not in the next few months. It will be next in the sequence after the first two anthologies Lin Carter edited, which will be a little soon.