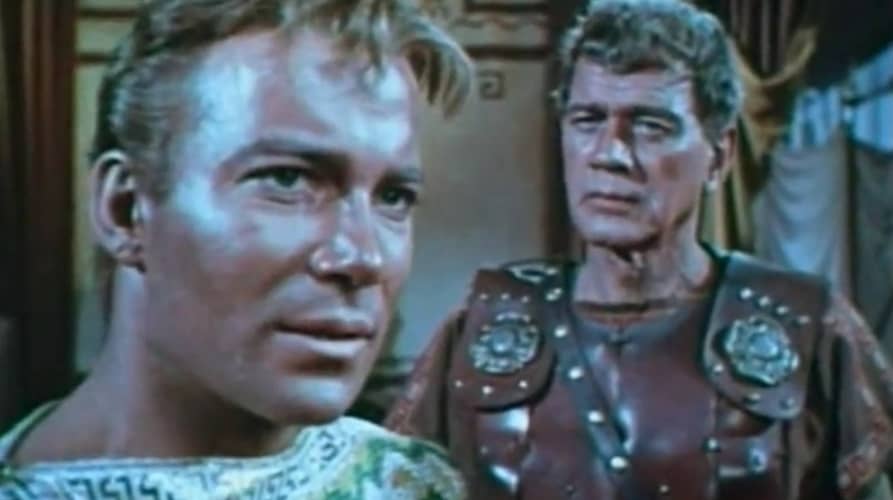 To explain the title: this week we’re covering a lesser-known version of Alexandre Dumas’ Three Musketeers, plus a movie about Alexander the Great. If this seems like a weak pretext for a Cinema of Swords article theme, you’re right — mea culpa, it’s a fair cop, I’m busted. The fact is, I was desperate for an excuse to bring you a review of an obscure adventure film about Alexander the Great that stars — wait for it — none other than William Shatner and Adam West!

But we’ll start with the other Alexandre, a French Three Musketeers from the mid-Fifties, preceded by Fanfan la Tulipe, the hit film that brought swashbucklers back to the French cinema. However, if you feel the need to skip ahead to the Shatner flick, hey, this is the internet, no one’s looking. 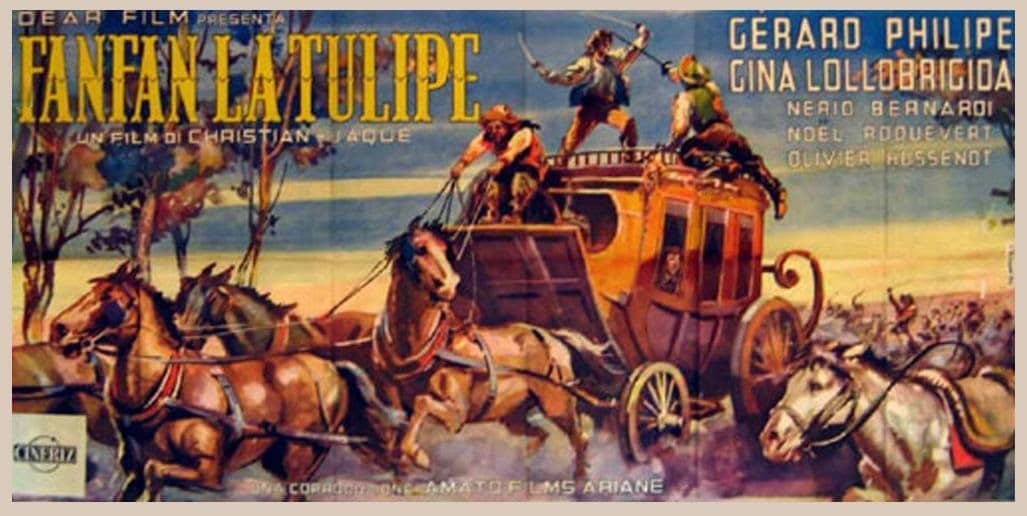 In this classic French comedy swashbuckler, Gérard Philipe plays the role of Fanfan, a name that’s a term of endearment for a charming child, and this film is nothing if not charming and endearing. But though childlike in some ways, Fanfan is no child: we first see him in a haystack where he’s just seduced a farmer’s daughter. Active and confident, for a while he escapes the farmer and his pursuing friends, but eventually Fanfan is caught and sentenced to a shotgun wedding. While being frog-marched to the altar, Fanfan meets the voluptuous Adeline (Gina Lollabrigida): she pretends to read his fortune, telling him he will join the army, become a famous war hero, and marry the daughter of the king!

Faced with life married into a farming family, Fanfan decides he prefers to believe in this fortune and follow it to his destiny. As it’s the middle of the 18th century and France is recruiting soldiers for the Seven Years’ War, Fanfan flees his would-be in-laws and signs up with the Regiment of Aquitaine — only to find that Adeline is the daughter of the regiment’s recruiter and told him that story just so her father would get a bonus for the new recruit. Destiny or no, Fanfan makes a terrible soldier and seems bound for a permanent home in the brig until his troop encounters a noble’s coach being attacked by bandits.

While the other soldiers cower, Fanfan single-handedly takes on the bandits, all the more eagerly when he finds the coach contains two beautiful ladies, and drives off the attackers. Fanfan is pleased with himself, then stunned to find that the ladies in the coach are the Marquise de Pompadour (Geneviève Page), the mistress of the king, and Henriette de France (Sylvie Pelayo), the king’s daughter! The marquise gives Fanfan a brooch shaped like a tulip, earning him the moniker Fanfan la Tulipe — but Princess Henriette gives him a kiss. Destiny calls!

As Fanfan, Philipe is winning and irrepressible, even when being marched to the gallows or thrown in prison for yet another exploit. And, sacre bleu, the man can fence, bounding around saber in hand, grinning from ear to ear, in a performance that can’t help but bring to mind Gene Kelly as d’Artagnan in the 1948 Three Musketeers. As soon as one bout is over you want to watch it again, just to savor it.

The story is slight and knowingly improbable, all but winking at the viewer so you won’t take it too seriously. Lollabrigida is just on the cusp of her international stardom, and her Adeline is feisty enough to slap the faces of both Fanfan and King Louis XV. The direction is clean and unencumbered by artsy flourishes, sharp and quick in the action scenes while giving the character actors plenty of space during the comedy bits. For a fun evening, pair director Christian-Jaque’s Fanfan la Tulipe with his later swashbuckler The Black Tulip from 1964. Délicieux! 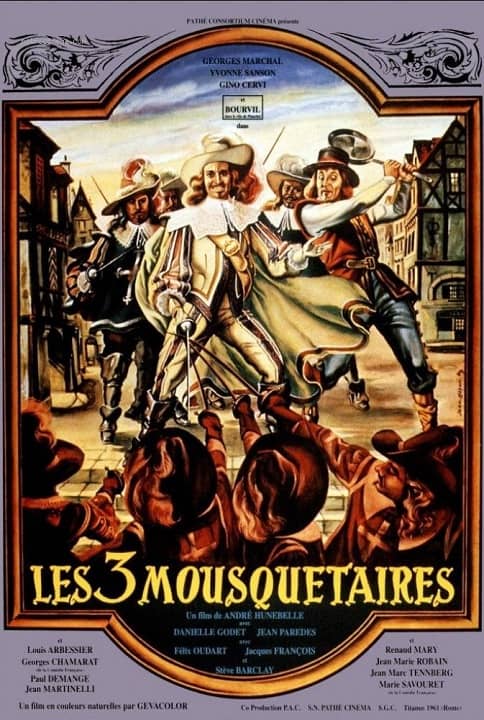 This action-comedy was the first major French production of The Three Musketeers since Diamant-Berger’s epic two-part adaptation of twenty years before, and though it borrows a few bits from that predecessor, it owes far more to the first half of the 1948 MGM version with Gene Kelly. Unlike the 1932 version, which presented the whole novel, this entry takes the usual approach of adapting only its first half, the affair of the queen’s diamonds.

It does so with a decidedly light touch, though it employs the regrettable device of an intrusive narrator, not just at the beginning but all through the film, helpfully explaining the jokes so you won’t miss them. Moreover, the cast just isn’t that impressive, the only standout being sad-sack comedian Bourvil as d’Artagnan’s lackey Planchet; he gets plenty of screen time, but that’s okay because he’s much funnier than the narrator. The other high point is that the film is shot on location at the French royal châteaux of Fontainebleau and Vincennes, so the settings are both opulent and authentic.

The swordplay is enthusiastic and theatrical without looking dangerous, which is in keeping with the movie’s tone, the story moves along capably enough, and there are plenty of jokes — even, mon Dieu, a pie fight with the Cardinal’s Guard! It must have been what the French cinema audience was looking for, because it was a sizeable success, so much so that director André Hunebelle made several more light swashbucklers before the end of the Fifties. 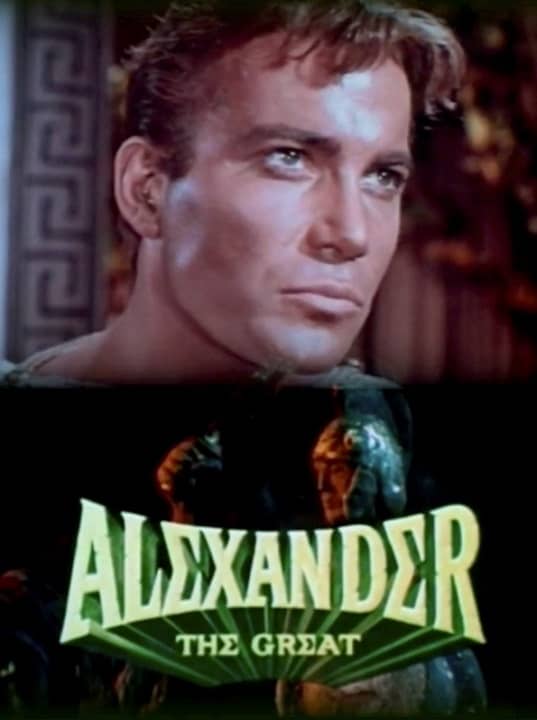 An action TV movie with William Shatner (Captain Kirk) as Alexander and Adam West (Batman) as his loyal general Cleander? Can this be true?

It is. Shot in 1963 as a one-hour pilot for an unproduced series, this wasn’t broadcast until 1968, after the breakout TV success of stars Shatner and West. West is the second banana here and doesn’t get much screen time, but Shatner as the conquering king of Macedonia is in full-on Kirk mode, and no fan of Original Star Trek should miss this.

There are many other familiar faces in the cast, including John Cassavetes (The Dirty Dozen) and Joseph Cotten (frickin’ Citizen Kane), both listed as Guest Stars, which means, of course, that they won’t survive the episode. Alexander has conquered the east coast of the Aegean Sea and is pushing his army east into Persia, seeking a confrontation with King Darius.

Not just the King of Macedonia, this Alex is also an action hero who’s personally riding ahead with his scouts when he comes upon a squad of his troops tortured and hung upside down on a dead tree. “There’s no soul… to these barbarians!” Alex emotes. “I’ll… teach them!” One of the soldiers, not yet dead, reveals that Alex’s buddy Cleander was captured by the Persians — and there he is, tied to a horse among a squad of Persian cavalry on the hilltop just ahead! Who cares if it’s a trap? Charge!

Cut to the Greek camp five days later, where the generals are arguing about what to do since the missing Alex must certainly be dead. One of them has to be the traitor who set up the ambush that seems to have slain the king, but who? Well, there’s no time to waste in a TV pilot, so obvious traitor is obvious: it’s Karonos (Cassavetes), who is reluctantly supported by Antigonus (Cotten) to be the new leader. Karonos orders a retreat west to the coast — but then, surprise! Alex shows up with Cleander, rescued, ‘cause he’s an action hero, no explanation needed. He confirms Karonos’ order to break camp, but instead commands a forced march east, to capture the Persian army by surprise.

First, though, Alex and his generals have a party, so the conqueror’s buxom lover, Persian Princess Ada (Ziva Rodann), can do a gratuitous exotic dance while Shatner smirks and leers. (So good.) Then it’s on to the confrontation with the Persians, the treachery of the traitors, and the deaths of the Guest Stars. The battle scene re-uses footage from the Steve Reeves sword-and-sandal epic Giant of Marathon (1959), and that’s fine, because it gives us plenty of shots of Persian soldiers in those doofy bulbous helmets.

The episode’s swordplay is directed by Albert Cavens, son of the great fight master Fred Cavens, but though Shatner is enthusiastic, Albert still isn’t able to get him to wield a bronze short sword convincingly. The excellent music is instantly recognizable as by composer Leonard Rosenman, who scored 151 episodes of Combat!, and his overwrought soundtrack is a good match for the hyperbolic Shatner as he looks moodily into the setting sun, emoting over the death of so many good Greek and Persian soldiers. What a shame this wasn’t picked up as a series.

My favorite non-Trek Shatner performance was in The Andersonville Trial. Nobody gets punched in the whole thing, which is kind of a defect for a Shatner joint, but I watched it with my dad when he was in the JAG Corps, and I’m sentimental like that. Possibly unlike anything else Shatner was in. https://www.imdb.com/title/tt0065399/

I used to teach a basic literature class to college freshmen, and one of the 4 plays I taught every semester was Sophocles’ “Oedipus Rex.” The 1986 version of the play I showed in class starred Michael Pennington in the title role; his only other reason for being mentioned on Black Gate may be his brief appearance in “Return of the Jedi.” But I also showed an earlier version of the Greek play, from 1957, as directed by Tyrone Guthrie, and in the introductory segment, as Douglas Campbell (playing Oedipus) explains what viewers are about to see, there stands to Campbell’s left a very young William Shatner, who, once the play starts, is unrecognizable as a masked member of the chorus. Shatner also showed up as one of “The Brothers Karamazov” in the 1958 film with Yul Brynner. I’d be curious to see his Alexander.

Another Ellsworth’s Cinema of Swords? Great!

I’ve never heard of any of these items and they all sound like they’re worth a look. Thanks for the heads up, as always, but really Mr. Ellsworth:

“hey, this is the internet, no one’s looking.”