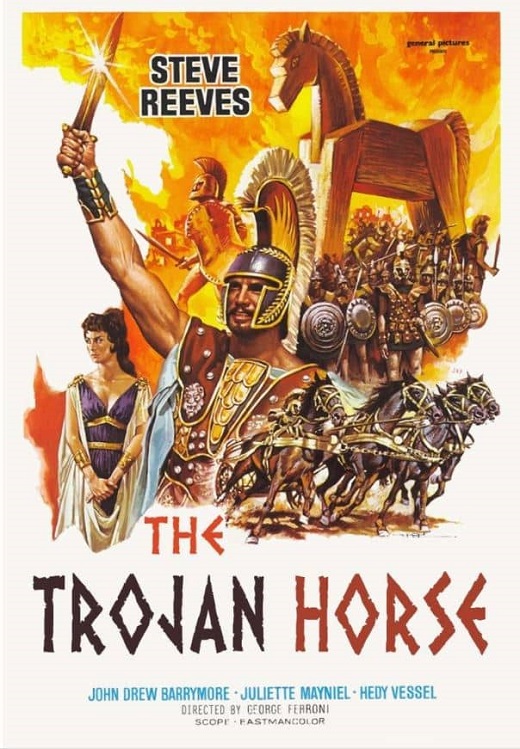 Our major source for stories of the legendary Trojan War is Homer’s The Iliad (8th century BCE, more or less), which includes a huge cast of characters from both the besieging Greeks and the defenders of Troy, as well as the many Olympian gods who meddle in the mortals’ affairs. For focus, a screenwriter telling a story based on this epic needs to pick a few major characters to follow and relegate the rest to supporting roles. In films made in the middle of the 20th century, that usually meant leaving the gods out entirely, because including them would have meant your film was considered a fantasy (the horror!), and the Western movie-going audience was deemed too Christian to regard Classical polytheism as anything but benighted superstition.

But that left plenty of warrior heroes to choose from, particularly the big names like Achilles, Hector, and Odysseus (though he appears in The Iliad as more of a manipulative schemer than hero). However, the movies we’re covering this week chose different heroes for their protagonists, elevating Paris to focus on his romance with Helen and Aeneas because of his later role as one of the founders of Rome. Unsurprisingly, they chose strikingly handsome actors to fill those roles, Jacques Sernas for Paris and Steve Reeves for Aeneas, and the backup actors, male and female, were mostly gorgeous as well (Brigitte Bardot, for example, in an early minor role). Hey, if you’re going to be traipsing around in a short chiton, I guess you’d better have good legs. 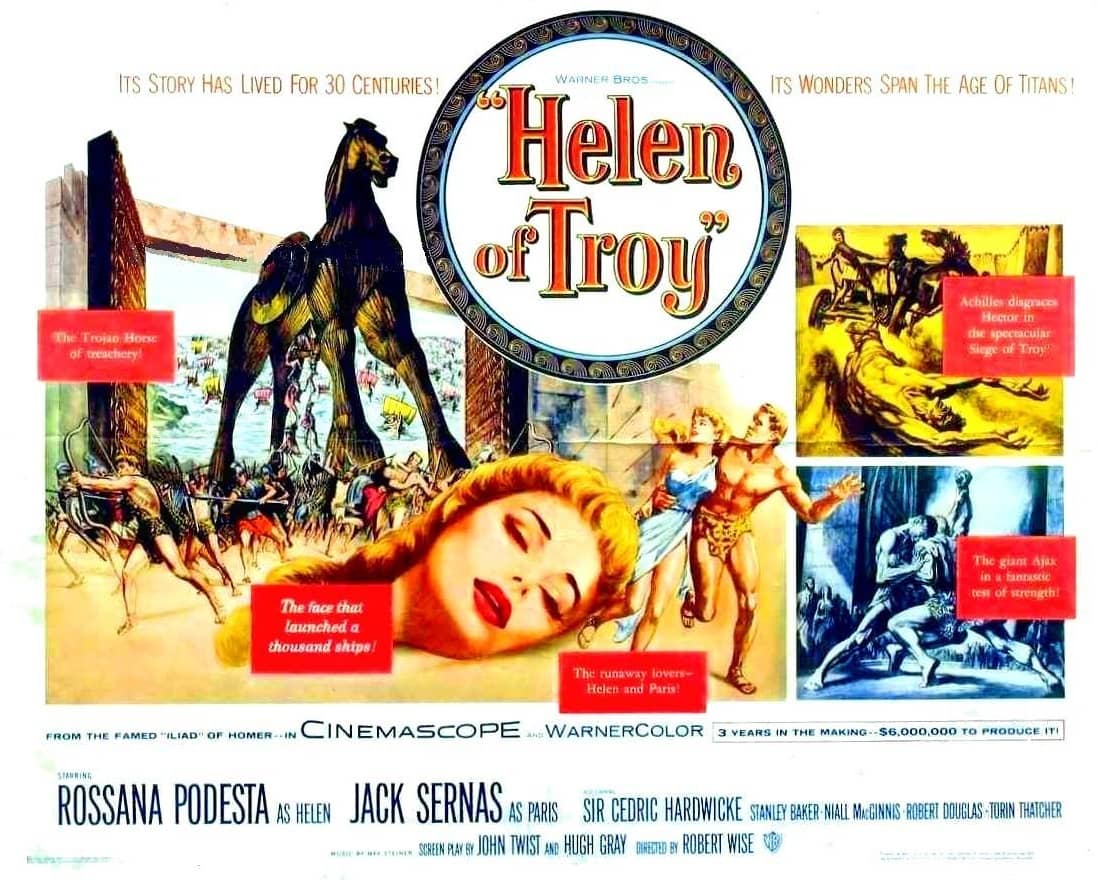 This is a triple-A sword-and-sandal epic, a big international production conceived in Hollywood and executed in Italy with a pan-European cast. It’s meant to be first and foremost a love story between knockout leads Paris of Troy (Jacques Sernas) and Helen of Sparta (Rossana Podestà), but with stiff and unconvincing performances around a flat script, the romance is dead in the water, a surprise from director Robert Wise of West Side Story. (It doesn’t help matters that both stars’ voices are dubbed, albeit discreetly, for the English language version.)

The action sequences of the Trojan War come off better, which makes sense given that the second unit directors were Yakima Canutt and Sergio Leone. The Greeks’ initial assault on the walls of Troy, with phalanxes, war chariots, and ox-drawn siege towers, is a grand spectacle, and the bronze-age swordplay is exciting and pretty persuasive. (Authentic? Who knows?) The Greek and Trojan warriors look tremendous in armor right off period ceramics, and wait until you see the towering horsehair crests on the helmets of the Greek kings, simultaneously majestic and ridiculous.

Stanley Baker as Achilles and Harry Andrews as Hector are godlike, but somebody has to be because the Classical gods have been strangely excised from the story, which plays fast and loose with Homer’s Iliad. I guess when you need to turn Paris from a selfish weasel into a romantic action hero and make the Greek kings nothing but pirates out for Troy’s plunder, then Homer, shmomer, am I right? Just shoehorn “The face that launched a thousand ships” and “Beware of Greeks bearing gifts” into the screenplay somewhere and you’re good to go.

But don’t worry, though most of the dramatic scenes are wooden posturing, there’s good stuff in here, including a surprisingly endearing performance by Janette Scott as King Priam’s prophecy-haunted daughter, Cassandra. But the person who’s having the most fun is Ulysses (not Odysseus — this production mixes Greek and Roman proper names with gay abandon). He’s played with gusto by Torin Thatcher (the sorcerer Sokurah from The 7th Voyage of Sinbad) as a wily reprobate who is just waiting for his fellow Greeks to suffer a setback so he can gleefully persuade them to put his mad plan for the Trojan Horse into action.

And it works! After a ten-year siege, the Trojans, giddy with victory and desperate for a good time, draw the great wooden horse in through their gates and then celebrate — and as this movie has a screen credit for “Bacchanal Choreography,” there’s no need to tell you what kind of a party they throw. Trust me, though, if you put on a frenzied Trojan bacchanal, you want your music to be composed and conducted by Max Steiner, fair recompense for any number of dull debates in Daddy Priam’s throne room.

Say, this isn’t bad. Oh, it has the starchy script and stale acting you see in most Italian historical epics, but a few standouts carry the rest of the cast, and as an action movie about ancient warfare it’s a winner.

We’re back in that familiar tenth year of the Trojan War that Homer tells us about in The Iliad, a sprawling saga with a bewildering cast of heroes and gods. If you’re going to make a movie from it you have to pick somebody from the crowd to be your protagonist, and this is an Italian film, so they’ve picked Aeneas, because he’s an honorable warrior who survives the war and goes on, at least in legend, to become one of the founders of Rome.

As the movie begins, the foremost Greek warrior, Achilles (Arturo Domenici), has just slain his great Trojan rival Hector and is dragging the body around the battlefield behind his chariot. This is watched from the walls of Troy with grim sorrow by Aeneas (Steve Reeves), who thinks the war has ground on long enough and that it’s time to make peace, an opinion that pits him against his commander, the weaselly Paris (Warner Bentivegna) and his bitchy stolen wife, Helen (Edy Vessel). King Priam (Carlo Tamberlani) decides to go alone to the Greek war camp to beg for the return his son Hector’s body, and Aeneas defies Paris’s orders to go with him.

This gives Aeneas an opportunity to flex pecs against Greek muscleman Ajax (Mimmo Palmara) and cross verbal swords with Ulysses (John Drew Barrymore). For defying Paris, Aeneas is sent away from Troy to raise troops among the Dardanians, while jealous Helen insists that his pregnant wife, Princess Creusa (Juliette Mayniel), must be sent to the Greek camp as a Trojan hostage. When Aeneas gets back with his army of Dardanians, he’s mighty pissed, and defies Paris again to storm the Greek camp. Things get messy, much blood is spilled, and when the Greeks pretend to retreat, they leave behind this great, big wooden horse….

Reeves is no more expressive here than usual, but he’s handsome and the camera loves him, leaving the actors playing Ulysses (always a great part), Paris, and Cassandra to do the heavy lifting. Both Troy and the Achaeans field impressive armies whose maneuvers are beautifully filmed, the troops all geared out in fine arms and armor, and trained to look convincing using it. Reeves as usual looks his best when engaged in personal combat, and there’s a fair amount of it, especially after Ulysses and company come out of that big horse and open the gates of Troy to the Greek infantry.

Catastrophic endings with cities afire are standard fare in sword-and-sandal epics, but here the fall of Troy is thoughtfully, even movingly staged, a sincere and mostly successful attempt to convey its human tragedy. Kudos to Mario Amonini and Giovanni Fusco for their stirring music, which runs the gamut from brassy fanfares to the ending’s sorrowful dirge. A decent film, good enough that they made a sequel the following year, The Avenger, continuing the adventures of Reeves as Aeneas. 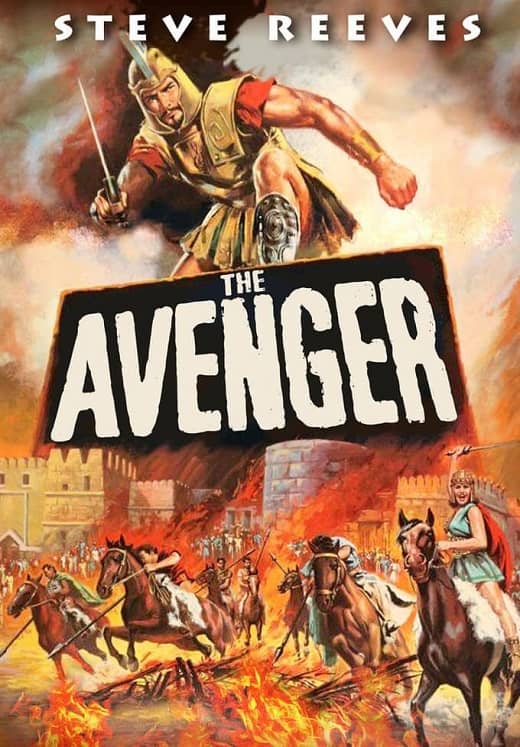 This sequel to The Trojan Horse (1961) is thoroughly adequate, though it’s not as good as its predecessor, smaller in both budget and ambition. Steve Reeves stars once again as the hero Aeneas, and in fact this is adapted from Virgil’s Aeneid (20 BCE); in Italy its title is The Legend of Aeneas, changed for American release because presumably nobody in the U.S. ever heard of that guy.

Aeneas and his tribe of refugee Trojans have fled west across the Mediterranean, and after many tribulations they’ve fetched up in Italy at the forks of the Tiber. This is in the realm of King Latino (Mario Ferrari) of the pre-Rome city of Latium, which to stave off the encroaching Etruscans includes a council of allied petty monarchs: arrogant bully-boy King Turno (Gianni Garko), noble but naïve King Pallante (Robert Bettoni), and fiercely independent Queen Camilla (Liana Orfei).

Contrary to the Aeneid, the gods play no active role. Turno, who hopes to grab Latino’s throne by landing either Camilla or Latino’s daughter Lavinia (Carla Marlier), immediately sees the famous hero Aeneas as a threat and tries to run him and his Trojans out of town, but wise old Latino grants Aeneas the Tiber marshland. At this, Turno flips out and puts his usurpation plans into action, framing the Trojans for murder and moving to attack their stockade. Pallantes sides with Aeneas, Camilla is on the fence, and then the Etruscans weigh in. And Aeneas finds himself once again reluctantly at war.

With no Troy in the background and considerably smaller armies maneuvering on the plains of Yugoslavia (standing in for central Italy), this film is less epic than Trojan Horse, but Reeves is as stoically charismatic as ever and fights a couple of well-staged single combats. Pallantes is pallid, but the fiery Turno and Camilla stand out from the otherwise-wooden cast, and the stage direction of the talking-heads scenes is more dynamic than usual for an Italian sword-and-sandal flick. The plight of the Trojan refugees in their stockade, once again defending their walls against attackers, is affecting, plus there’s a bonus European longhorn cattle stampede. The costumes are good, and the four-sided final battle is well handled. Summary: solid fare, though nothing special.

Caveat (that’s Latin, see): this film also exists in a slightly shortened English dub rendered into black-and-white for American television. Pass on that and find the color version if you can.

Another Ellsworth’s Cinema of Swords? Steve Reeves and the Trojan War? How can you go wrong?

I honestly cannot remember seeing ANY of these three films, and they all sound like they’re worth watching. Thank you again, Mr. Ellsworth (I keep saying this) for pointing me at enjoyable films I never even knew existed.

It was discovering The Trojan War as a grade-schooler, which led me to Bullfinch’s Mythology. Which led me to D&D, and fantasy fiction. The Iliad has probably had more impact on my life than any single thing, except the Bible.

I remember, in college, staying up until 3 AM once, watching The Trojan Women.

A couple older computer games featuring Troy were played over and over.

But the 2004 Troy is epic, and one of the greatest anti-war movies ever.