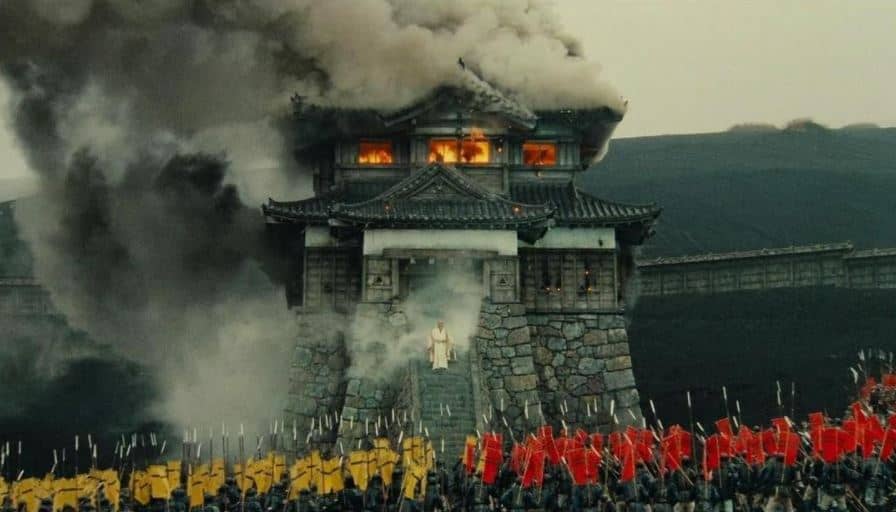 History, bloody history. In this series we usually concern ourselves with the adventures of heroes, singly or in small groups, in quests or endeavors to right wrongs or win personal rewards on a medium or small scale. But sometimes our sword-wielders’ exploits are set against the backdrop of full-scale warfare, imminent or ongoing, and the sheer quantity of blood spilled in wartime adds serious stakes and grave overtones to even the most spirited adventures. We all enjoy light-hearted tales of derring-do, but it’s wise and useful on occasion to remind ourselves that open warfare is the greatest misery that humankind can inflict on itself. It’s an important message, perhaps none more so, and as such it’s also a theme that can inspire great art. 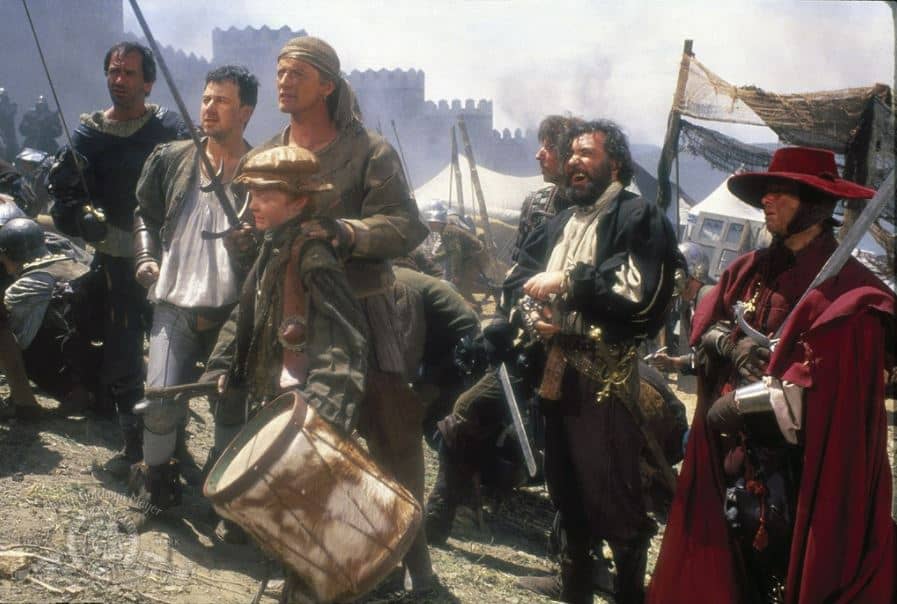 This historical drama is a stark and unflinching look at the damage war does to people. Good though it is, it won’t be for everybody, as it’s explicit and often brutal, even macabre, so fair warning.

The setting is northern Italy in 1501, a period of flowering Renaissance scholarship, bubonic plague, and bloody warfare between the Italian city-states. Lord Arnolfini (Fernando Hilbeck) has been thrown out of the city he ruled and has hired the mercenary Captain Hawkwood (Jack Thompson, playing a character based on the historical John Hawkwood), to retake it for him. Among Hawkwood’s mercenary troops is a band of soldiers led by the hard-boiled but charismatic Martin (Rutger Hauer). They are promised that if they take the city, they can loot it to their heart’s content, but after they succeed Arnolfini breaks his promise, disarms the mercenaries with Hawkwood’s help, and turns them away empty-handed. Martin vows revenge.

Arnolfini’s son Steven (Tom Burlinson), a would-be scholar, is engaged to the young Agnes (Jennifer Jason Leigh), a princess from a neighboring realm. They meet, and though Steven doesn’t wish to marry, Agnes, who wants him and is both determined and resourceful, persuades Steven to change his mind. But Agnes’ dowry caravan, with Agnes hiding inside it, is hijacked by Martin and his mercenaries. When she’s discovered, Agnes is raped by Martin in an ugly scene, but she quickly identifies him as the leader and decides her best chance of living through her captivity is to become his accomplice and lover. Together they invade a castle by stealth, opening the gates to let Martin’s mercenaries in for massacre and looting. But Steven and Hawkwood are in close pursuit, and when they put the castle under siege, Steven tells Agnes that she’s going to have to choose between him and Martin. “Winner takes all,” she says.

This is the first English-language film for director Paul Verhoeven (Robocop, Starship Troopers), displaying his signature mix of violence, sex, and astringent social commentary. The visuals are, rich, evocative, and devoid of sentimentality — the camera never looks away, and neither can you. The leads all deliver sharp, even biting performances, and even the secondary characters are sharply drawn and memorable. If the story rambles a bit, it’s usually to give some side character a well-deserved showing, and soon enough it returns to its central point: when war has destroyed ethics, morals, and honor, the only virtue left is survival. There are no good guys here, only those who die and those who do not.

Shot in superb locations in Spain, with nail-biting and savage combat offset by an exuberant score from Basil Poledouris, the action holds your attention all the way to the unexpected ending. Extra points for the scholastic Steven’s Leonardo da Vinci-inspired wooden turtle tank siege engine with its ultra-phallic telescoping ramp. Unbelievable. 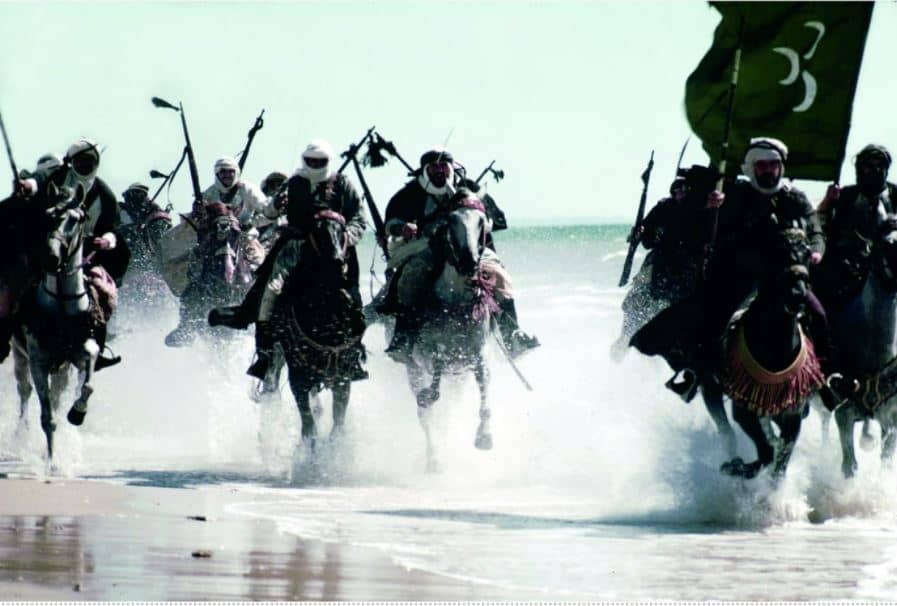 The Wind and the Lion

This is a curious piece of pure entertainment, a colonialist fable that revels in national caricatures of Americans, Moroccans, and Germans without believing its own depictions for a moment. It was written and directed by John Milius, who based his story loosely on the so-called Perdicaris Affair, an international incident in 1904 in which a Moroccan tribal leader, Mulai Ahmed er Raisuli, kidnapped an American citizen from outside the city of Tangier and held him for ransom from the Moroccan government, a ransom the United States insisted be paid. Seven American warships were sent to Tangier harbor, a show of force that was backed up by England, France, and Spain, and eventually Ion Perdicaris was released — but not before President Theodore Roosevelt had politicized the incident, running for reelection behind the tough-guy phrase, “Perdicaris alive or Raisuli dead.”

Milius adapts these facts to suit his story: the 64-year-old Mr. Perdicaris becomes an appealing young mother, Eden Pedecaris (Candice Bergen), who is kidnapped with her two children from within Tangier itself by Berber bandits led by the Raisuli (Sean Connery), a fierce but honorable freedom fighter. Teddy Roosevelt (Brian Keith) is portrayed as a bluff but wily rascal out to get whatever he can out of the incident for himself and the United States, whose interests he regards as identical. And American Marines under the bluff but wily Captain Jerome (Steve Kanaly) intervene directly in the sultan’s affairs and the rescue of the Pedecaris family, at one point getting into a firefight with a much larger force of predatory German troops. (Historically, the U.S. Marines stayed on their ships, and German soldiers weren’t present at all.)

However, these saber-rattling politics are secondary to the film’s real concern, which is depicting the Raisuli as a reckless but courageous and charismatic war leader who is hilariously baffled by the pluck and sass of Eden Pedecaris, a woman who won’t stay in her place — though eventually she comes to admire the Raisuli, who admits that he has no plans to harm her or her family, and that the whole abduction is a great bluff. Eden’s young son William (Simon Harrison) goes beyond admiration of the Raisuli to open hero worship, especially once the Berber chieftain single-handedly rescues the family with sword and horse from the ugly brigands who’d captured them after an ill-advised escape attempt. Indeed, we see the last scenes of the film largely through the boy’s eyes, emphasizing how much the story is really a “boy’s own adventure” tale with little grounding in reality.

Verdict: even with every character an exaggerated cartoon figure, the film still succeeds due to Connery’s charm, a steady pace punctuated by timely action sequences, and the beauty of its Spanish scenery, which stands in effectively for Morocco. Just don’t take it seriously, and when the film winks broadly at its own conceits, wink back. 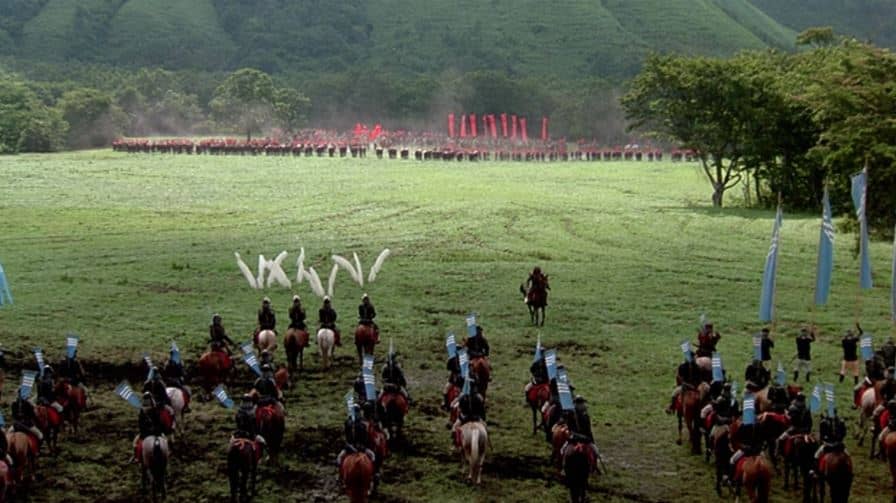 Writer-director Akira Kurosawa’s final historical epic, Ran is at the same time one of the greatest war and anti-war movies ever made. Though set in Japan’s Warring States period, this is not a samurai chambara adventure like Seven Samurai, but a grand Shakespearean tragedy—in fact, its story is adapted from King Lear, though Kurosawa’s initial inspiration was a tale from Japanese history.

The aging Lord Hidetora (Tatsuya Nakadai) has spent his life in warfare, conquering his neighbors step by bloody step until he finally rules the entire fertile Azusa plain and the mountains that surround it. But Hidetora is tired of war and decides to abdicate his power to his three adult sons, dividing his holdings between them while retaining his privileges and title as Great Lord. His eldest son Taro (Akira Terao), who will receive the greatest inheritance, is in favor of this, as is the next son, Jiro (Jinpachi Nezu), but the third son, Saburo (Daisuke Ryo), bluntly denounces it as the irrational act of a madman — for isn’t Hidetora’s world based on nothing but the gaining and holding of power?

Hidetora is outraged, banishes Saburo, and then goes to live in glorified retirement at Taro’s castle. But Taro is married to Lady Kaede (Mieko Harada), the vengeful daughter of the lord Hidetora slew to complete his conquest of Azusa. Kaede agitates Taro into driving Hidetora away — and when he tries to relocate to Jiro’s domain, he finds himself unwelcome there as well. Hidetora and his last few retainers are granted Saburo’s old castle, but it’s a trap — he’s betrayed by one of his own vassals who is working for Kaede, and his men are slaughtered, his castle sacked and burned. In the fighting, Taro is treacherously killed by one of Jiro’s men, leaving the second son on top, but Hidetora, stricken, escapes the fire and staggers off unseeing into the volcanic wasteland that surrounds the castle.

There’s a lot more to follow, and by the end everyone receives their comeuppance (Shakepearean tragedy, you know), but before that are some of the most magnificent samurai battle scenes ever filmed. The horrific siege and massacre at Hidetora’s castle is shown almost entirely without sound except for the heartrending music of Toru Takemitsu’s dark, searing soundtrack, and it is unforgettable. That grim episode is offset later by the bright victory of Saburo’s troops over Jiro’s much larger force, who are out to take the raving Hidetora’s head. Here Kurosawa delivers a master class in how massed troops in formation moving against each other in combat can be depicted with absolute visual clarity. Much of this is due to Kurosawa’s striking use of color to identify the four different forces involved despite the inevitable tumult of battle.

The great Tatsuya Nakadai as Lord Hidetora, his face makeup like a rigid Noh mask of age, plays his demanding role almost entirely physically, through posture and gesture. The most intense performance comes from Harada as Lady Kaede who, icy one moment and fiery the next, dominates every scene in which she appears. The famously androgynous entertainer Peter appears in the important role of Hidetora’s fool Kyoami, who laments the madness of human pride and treachery. But the real star is always Kurosawa’s unerring eye for composition, movement, light, and color — you could take any shot from this film and frame it on the wall. It’s a masterpiece.

Another Ellsworth’s Cinema of Swords? My Wednesday is Complete!

I’ve seen all three of these films and while I have no intention of watching Flesh + Blood again (not to my taste), The Wind and the Lion is a favorite I’ve seen many times. Everyone should watch Ran at least once. Kurosawa was amazing.

Flesh + Blood is a great movie, though i am biased to anything Rutger Hauer is in.

I never much cared for King Lear, but Ran is made of awesome. The most colorful depressing film ever!

I’ll second Flesh + Blood not being to my taste.

There was something about Candice Bergen I just didn’t like in “The Wind and the Lion.” Charlotte Rampling might have been a better choice; she played opposite Sean Connery the year before in “Zardoz.” Brian Keith as Teddy R. was a pleasant surprise.
I’d first seen Rutger Hauer in “Bladerunner,” in which he was outstanding, then in “Ladyhawke,” where he was again brilliant. He’s the reason I sought out “Flesh and Blood,” and I wasn’t disappointed. Very versatile and underappreciated actor.