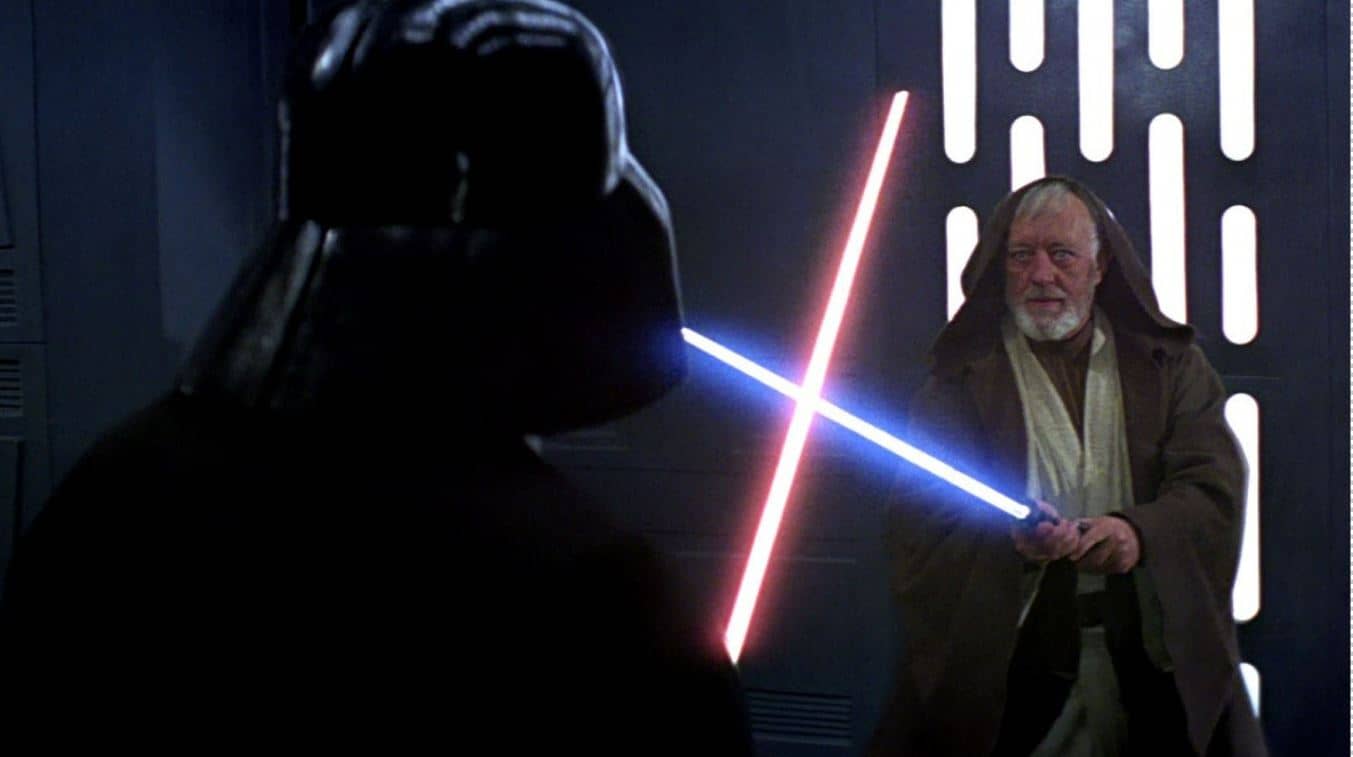 In adventure movies throughout the twentieth century, swords had been losing ground to guns as the hero’s weapon of choice. Though films of knights, pirates, and cavaliers had a strong start in the silent era, they were gradually sidelined over the decades as Western, gangster, and war movies came to the fore. By 1971, Dirty Harry and his ultra-macho Smith & Wesson .44 Magnum seemed to have put the nail in the coffin.

Then came Star Wars. And suddenly, out of the left field of Japanese samurai movies via the imagination of George Lucas, swords resumed their prominence. In the decade that followed, they even dominated for a while, falling back again during the Nineties to second place before Peter Jackson brought them back, seemingly for good, with The Lord of the Rings trilogy. So, from those of us who are sword fanciers, a hearty thank you to George Lucas, Peter Jackson — and Akira Kurosawa. 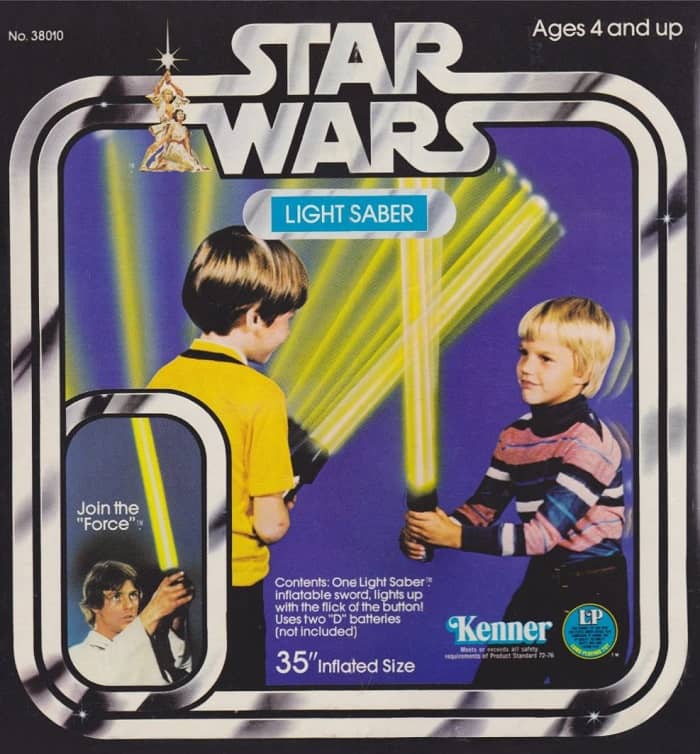 You already know what you think about Star Wars, so this entry isn’t going to be a full review of the film, just the part that matters to this series, which is the swordplay. Writer-director George Lucas was a fan of Akira Kurosawa’s samurai films such as The Hidden Fortress (1958), and when he was creating his space fantasy he knew he wanted it to include science-fiction katanas so he could get the striking look of classical Japanese fencing, but with energy weapons.

From the standpoint of realistic mêlée weapons, lightsabers are ridiculous, but from a cinematic point of view, they’re genius, probably the single element of Star Wars with the greatest visual appeal. And not just visual: their sound, that hungry energy hum as they’re swung about, added convincing credibility to their lethal effect. It all makes the lightsaber seductively appealing as a power fantasy, because it looks like even a wielder with little skill could do horrific damage with one, since the weapon does nearly all the work. Obi-Wan Kenobi uses his to take off a thug’s arm in the Mos Eisley cantina, which is a feat an ordinary katana could do as well, but not with a mere flick of the wrist.

Considering the outsize impression made by lightsabers, it’s surprising how little they actually appear in the first film. Luke practices with his aboard the Millennium Falcon against a hovering “remote” that fires mild zap blasts, and then the weapon doesn’t really appear again until the climactic duel between Obi-Wan and Darth Vader. This fight was directed by stunt coordinator Peter Diamond, who had experience with stage fighting and devised a two-handed style reminiscent of Japanese kendo, with the fighters feeling each other out, seeking advantage, until suddenly attacking with moves mostly of the arms and wrists. This made sense given the apparent properties of the weapons, but also took into account the capacities of actors Alec Guinness and David Prowse, who were neither fencers nor very athletic.

And so it was that, by the end of May, 1977, youngsters around the world were putting down their toy guns, picking up broom handles and cardboard tubes, and once again miming heroic swordplay, albeit with vverrroum-herrroummm noises rather than the clash of steel. 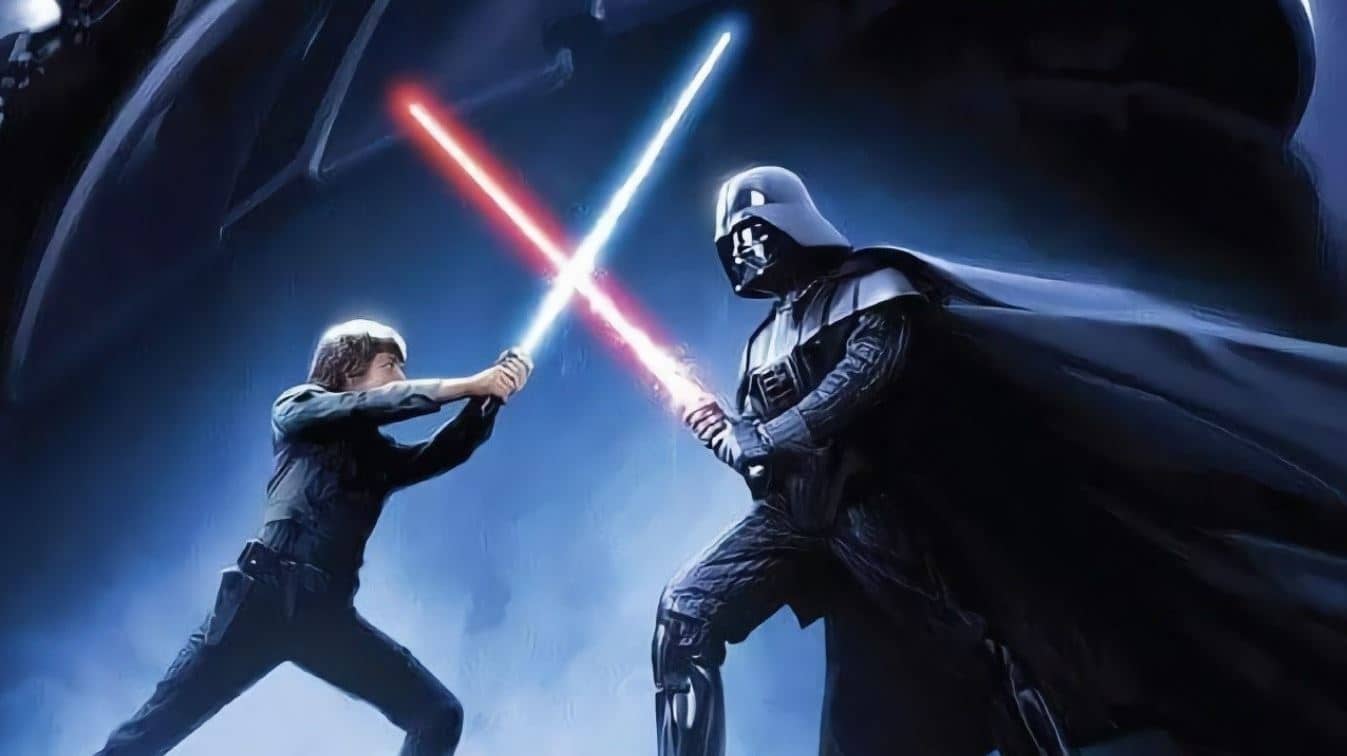 After Star Wars was a global blockbuster, there was a long laundry list of what was desired in its sequel, but on one subject everyone was agreed: give us lots more lightsabers!

The sequel delivered — and this time, George Lucas got an actual saber fencer to act as swordmaster. Bob Anderson was a former Olympic fencer who had worked in the background in filmmaking for many years, finally making a mark when he choreographed the smallsword duel in Barry Lyndon (1975) for Stanley Kubrick. Though his fight direction work on Empire Strikes Back was uncredited at the time and largely unrecognized for years afterward, it was Anderson who came up with the more fluid and dynamic lightsaber dueling style seen in that film and its sequel, Return of the Jedi. He even doubled for David Prowse in the role of Darth Vader for the more athletic fight sequences, and is responsible for the brilliant sword choreography that added so much impact to the Star Wars sequels.

As if to make up for how little he used the weapon in the first movie, this time around Luke Skywalker (Mark Hammil) wields the sword in every lightsaber scene, showing its use as a standard Jedi tool in the episodes set on the planet Hoth (where it once again lops off an arm, this time from a wampa snow-beast). On the planet Dagobah, during a Force-related vision quest, Luke then crosses lightsaber blades with a mind-illusion of Darth Vader, a foreshadowing of their climactic battle at the end. It’s in the final long, multi-stage duel between Luke and Vader that the Force first becomes a major element in the swordplay, adding a telekinetic wild card to the saber fencing.

Bob Anderson would go on to become a major figure in cinematic swordfight direction, choreographing the duels in Highlander (1986), The Princess Bride (1987), The Mask of Zorro (1998), and The Lord of the Rings trilogy (2001-2003) — but arguably it was his work on The Empire Strikes Back that made the greatest and most lasting impression. 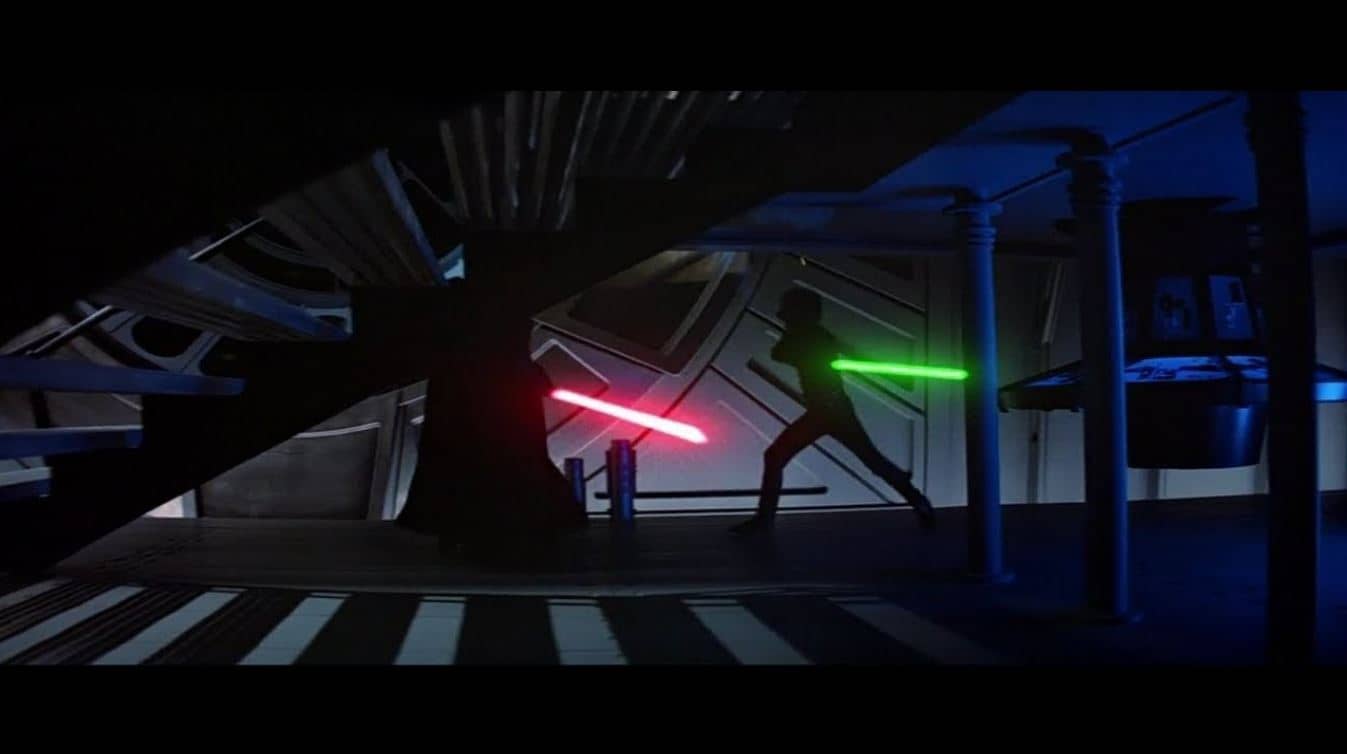 For Return, Luke Skywalker (Mark Hamill) picks up his lightsaber yet again, but Luke has changed between the second movie and the third, and his mastery of the lightsaber shows this more than any other aspect of the film.

But first we must have the sword-and-planet adventure of Luke and company rescuing Han Solo (Harrison Ford) from Jabba the Hutt on Tatooine, with Skywalker bounding around atop Jabba’s Barsoomian flyers going full Mifune on the crimelord’s many goons. Luke intermixes use of the Force with rapid swordplay, and if the sequence goes on a bit too long, we forgive it for its enthusiastic sense of fun and triumph over the forces of cartoonish evil.

After that the film gets darker, as the stakes in the fight between Empire and Rebellion reach an existential level. As the personifications of the two sides, Darth Vader (David Prowse) and his son Luke inevitably face off in an extended, climactic lightsaber duel. As in The Empire Strikes Back, the swordplay is choreographed by Bob Anderson, who sometimes dons the Vader suit for the more physical moves. Taking advantage of the fact that the energy blades are also light sources, the duel is atmospherically set on a series of darkened stages lit mainly by the clash of the lightsabers. Director Richard Marquand’s use of quick cuts increases the feeling of danger from previous duels in the series. This sharpens the fight’s dramatic function, which is to show how Luke has internalized the lessons of the first two films to show what it really means to be a Jedi Knight. Vader toyed with Luke in Empire Strikes Back; this time the son holds his own against the father, and more. It’s a classic lesson in how cinematic swordplay can be used, not just to embellish a film, but to effectively tell its story through motion and emotion.

From the standpoint of realistic mêlée weapons, lightsabers are ridiculous, but from a cinematic point of view, they’re genius, —

I always felt that way.

A salute to Bob Anderson!

Someday, after I make my millions, I’m going to pay some GCI experts to re-do the Obi-Wan vs Darth Vader scene and add in that the real fight is between their force auras. Like they are both enveloped in amorphous fields of power that are jabbing and countering each other. In concert to the light-sabers, I think that would look awesome.

[…] An Elegant Weapon For A More Civilized Age […]