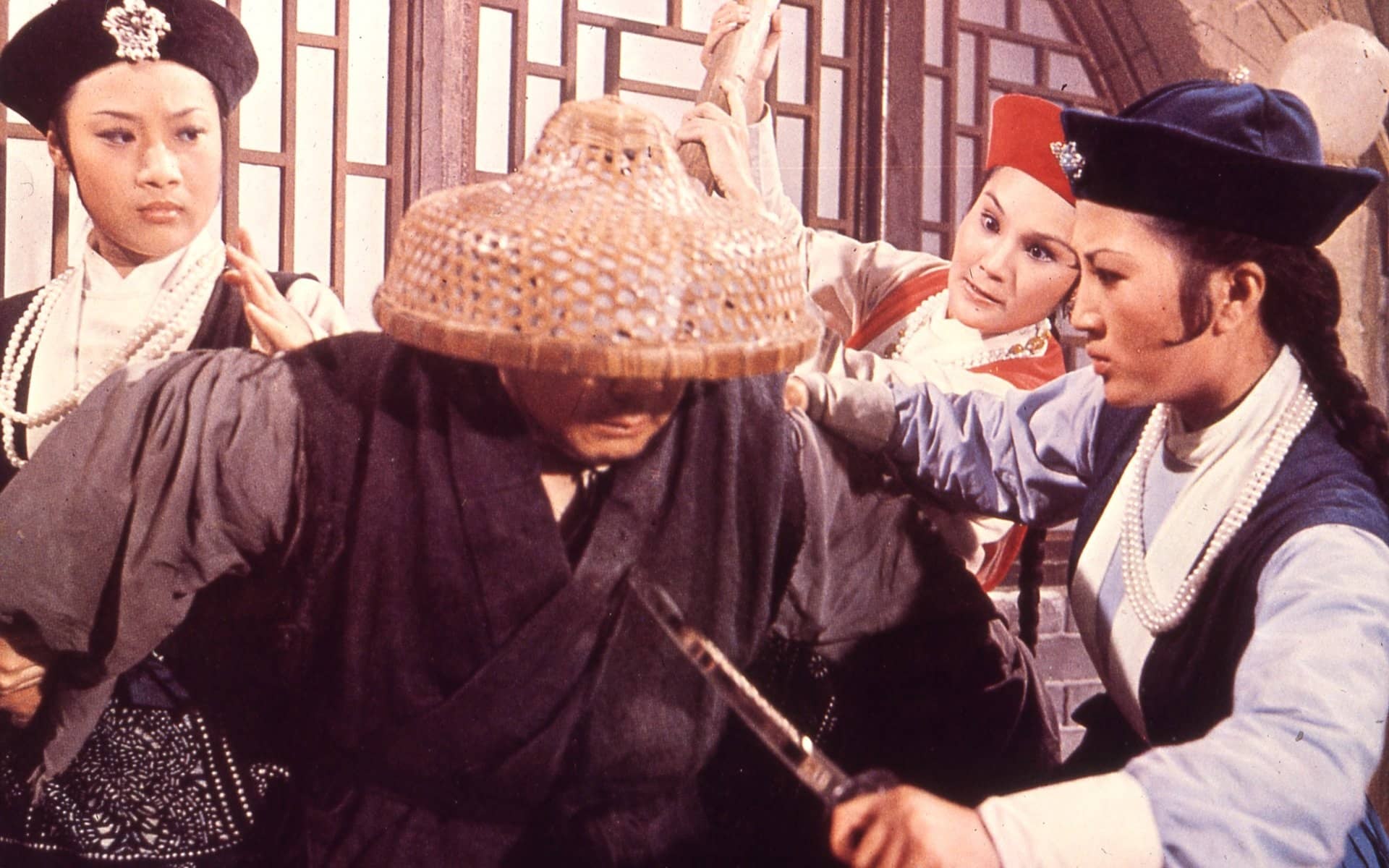 Hong Kong directors King Hu and Chang Cheh had revived the wuxia, or chivalrous hero genre for the modern era in the late Sixties, dominating Asian box offices until Bruce Lee burst on the scene in 1971 with his weaponless kung fu films set in contemporary times. The biggest Hong Kong studios, Shaw Brothers, Golden Harvest, and Seasonal films, all began churning out kung fu thrillers as fast as they could. Historical wuxia movies were eclipsed during the kung fu boom, but the studios kept making them, and following the trend of the times they increasingly included unarmed action sequences amid the sword, spear, and axe fights. And as the martial arts bar was raised, the action kept getting faster.

The Fate of Lee Khan

After the commercial failure of A Touch of Zen, writer-director King Hu turned to a new variation on his blockbuster success Dragon Inn. Though less ambitious than Zen, Lee Khan still sees Hu pushing the envelope in several areas. For one thing, instead of a single strong female character, as in previous Hu wuxia films, this time around there is half a dozen — nearly half the combatants here are women. Moreover, the cast is full of top-notch character actors and much of the story is conveyed by their expressions, sometimes subtly, sometimes as broadly as if this was a silent film.

The story is set toward the end of the Yuan Dynasty, when China is ruled by the Mongols, and one of their leaders, Lee Khan (Tien Feng), is seeking to crush the rising revolt of the Han Chinese under General Zhu. Khan’s sister and collaborator, Lee Wan-erh (Hsu Feng), corrupts one of Zhu’s officers into selling them a map of Zhu’s deployments, and the pair arrange to meet the traitor at the remote Spring Inn. But the rebels have their own spies among Lee Khan’s forces, so agents from both sides — all martial artists, of course! — converge on Spring Inn to try to get hold of the map.

Almost the entire film is set inside the inn; it could almost be a stage play. The inn is run by Madame Wan (the great Li Li-Hua), and in preparations for the shenanigans to come, she hires four women, rebel outlaws all, as her new table servers. They are joined by Wang (Ying Bai), the leading rebel agent, and his sidekick Yun (fight director Sammo Hung), a comically obnoxious musician. In the lighthearted first half of the movie, the inn’s rebel agents are tested by several waves of troublemakers — bandits, cheating gamblers, and crooked cops — which gives the outlaw waitresses a chance to show their chops as they settle the intruders’ hash.

But some of the troublemakers are actually Lee Khan’s advance agents, and when Khan and Wan-erh arrive suddenly, accompanied by a troop of murderous guards, the tone of the film darkens. The crooked cops are arrested by Khan’s guards and taken away for summary execution, and then Khan’s spymaster, Tsao (Roy Chiao), tipped off by the advance agents, begins a fierce interrogation of the employees of the inn. But Tsao stops short of denouncing any of the rebels because he is secretly a rebel too, determined to help get the traitor’s map and, if possible, put an end to Lee Khan.

The movie’s second half is a suspenseful heist drama, with tense scenes savoring of Hitchcock, especially when Black Peony (Angela Mao), the lockpicking rogue waitress, steals the wrong document from Lee Khan and then has to find a way to return it. The tension ratchets tighter and tighter until the final explosion, when the masks come off and the blades come out — though in keeping with where Hong Kong action films were going in 1973, there’s as much unarmed combat as armed. The final, extended mêlée bursts the bounds of the Spring Inn, and director Hu moves the mass combat outdoors for the slam-bang climax. Very satisfying. 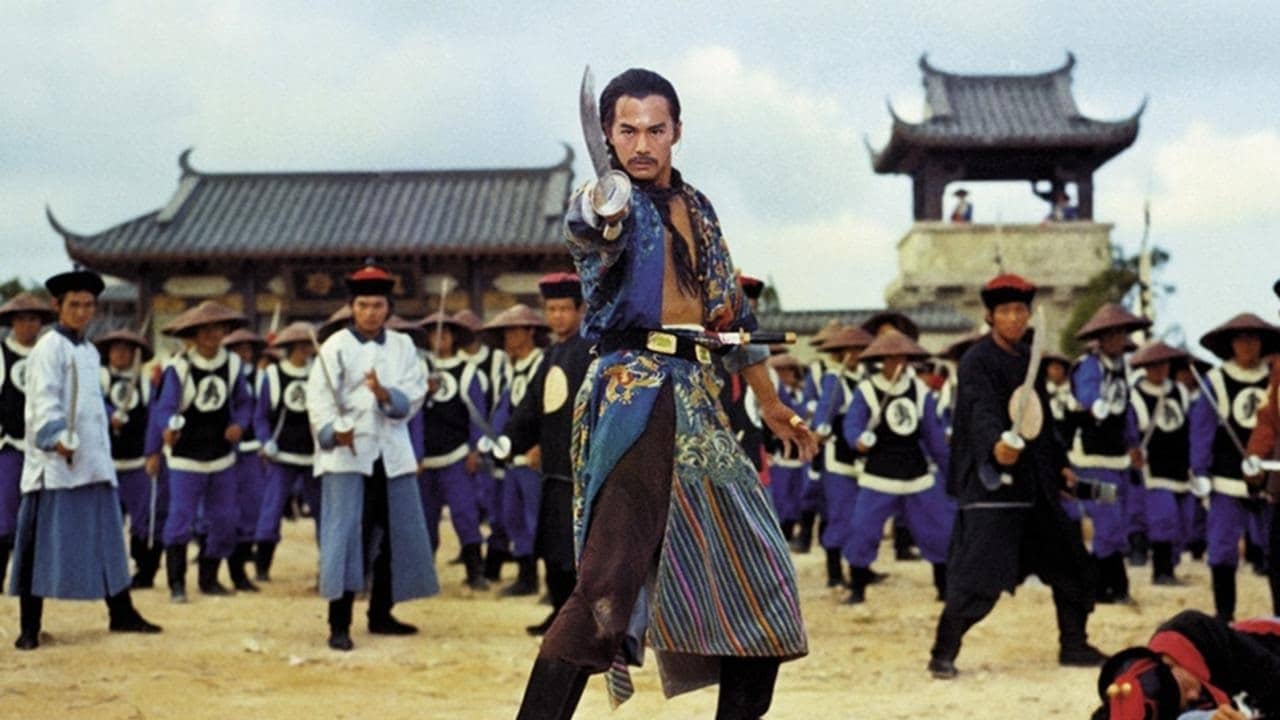 With this film, director Chang Cheh’s storytelling achieves a new maturity centered on solid character development and the evolving relationships between his four leads. Blood Brothers trades some of the colorful theatricality of Cheh’s earlier movies for the grand expansiveness of southern China.

The entire story is told in flashback: frantic shouts inform us that Officer Ma Hsin has been assassinated, but his killer has been captured and is hauled in chains before an imperial judge. The assassin, Chang (David Chiang, the man with the world’s most charming smirk), asks for paper and a brush so he can write out the story of why he did it.

Four years earlier: Chang and his partner Huang (Chen Kuan Ti) are martial artists who have descended to highway robbery, though they’re cheerful about it. A lone man on a horse approaches, and the pair decide to relieve him of both horse and whatever money he’s carrying. But the horseman is Ma Hsin (Ti Lung), another martial artist who fights Chang and Huang to a standstill — until Huang’s wife, Mi Lan (Ching Li) rides by and mockingly grabs up Ma Hsin’s money. Ma Hsin tracks the robbers to their lair, not because he wants his money back, but because he thinks they’re wasting themselves on a life of petty crime. Join me, Ma Hsin says, and together we’ll take over a powerful nearby bandit gang and establish ourselves as a serious local force!

After considerable leaping, hacking, and whacking, the deed is done, and Chang and Huang congratulate themselves on finally arriving at the good life they’d dreamed of. But Ma Hsin has bigger dreams: he not only trains the bandits into a fierce fighting troop, at night he studies for the imperial exam, takes it and gets top marks, and then goes off to become a government officer. Ma Hsin prospers in his new role, becomes a minor general, and sends for his blood brothers and their trained troops to add to his forces.

Together, they succeed in defeating the powerful Long Hair Bandits, and Ma Hsin is made the governor of two provinces. Brother Huang starts spending his time in gambling houses, while his wife Mi Lan starts spending her time with Ma Hsin — but Brother Chang sees what’s going on and doesn’t like it. Huang has become an embarrassment to the increasingly ambitious Ma Hsin; Chang tries to warn Huang about what’s going on, but Huang refuses to believe it, and unfortunately it’s too late — Ma Hsin has set Huang up to be murdered during a phony bandit raid. This, Chang cannot forgive, and he sets out to take Ma Hsin’s own life in revenge for Huang’s.

This story of loyalty, ambition, and betrayal is engaging and well-paced from beginning to end with scarcely a lag. There’s a lot of combat here, and it’s about evenly split between armed and unarmed bouts. And it must be said, the unarmed fighting is quicker and more exciting than the clashes with weapons — you can almost see director Cheh deciding that he’s done with wuxia and moving on to kung fu. And basically, the rest of Hong Kong filmmaking went with him. 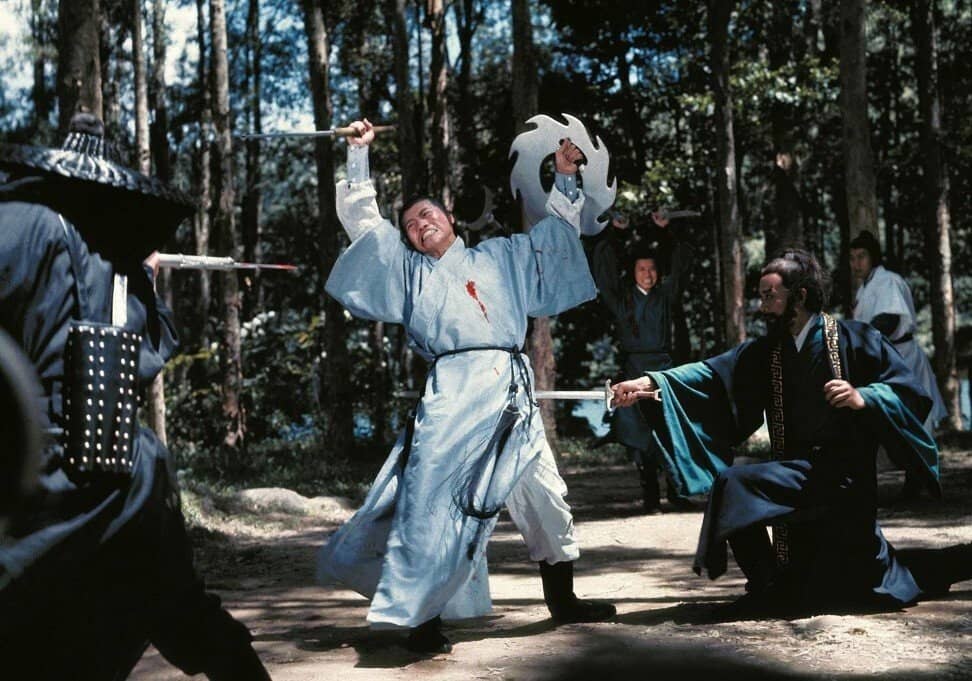 Killer Clans is a wuxia martial arts adventure crossed with a spy thriller, and it’s quite good. Adapted from a novel by Ku Lung, the clans of the title are “secret societies,” which in this case means organized crime families, and the tale is of a war to the death between two of them, the predominant Lung Men Society, led by Uncle Sun Yu (Feng Ku), and the rising Roc Society, led by Wong Pan Wong. Caught in between is an assassin-for-hire, Meng Sheng Wen (Wang Chung), a handsome loner with a code of honor who only kills those who’ve got it coming.

Meng is hired to assassinate Uncle Yu, but his effort is really just a diversion to distract Uncle from his real enemies, the traitors hidden in the Lung Men ranks. But Uncle has his own agents lurking in the Roc Society, and a war of bloody murder commences as the leading martial artists of both sides are betrayed one by one and slain. The plot has all the hallmarks of a superspy movie, with sleeper agents, false identities, secret escape tunnels, murder-by-seduction, and deathtraps, along with the wuxia genre staples of acrobatic duels with exotic edged weaponry, kung fu leaps, drunken warriors, and old men with extravagant facial hair. There’s even a tragic romance.

Amid all this betrayal and bloodshed, Meng, under an assumed name, infiltrates Uncle Yu’s household, but gains a grudging respect and admiration for the man he was hired to assassinate. And Uncle Yu finds that “The only person I can trust now is the one who came to kill me.” The film is well paced, the fights are exciting, the costumes and sets are visually striking, the double crosses come thick and fast but not too quick to follow, and there’s even a surprise dungeon crawl. Most versions of this film clock in at 91 minutes but look for the 102-minute Dragon Dynasty version — the extra ten minutes make the plot much clearer.

The only one of these movies I’ve seen is Blood Brothers which I got with a copy of Avenging Eagle dvd. It’s a good movie. It’s interesting that it is billed kung fu/wuxia but is as much a character drama.

Another Ellsworth’s Cinema of Swords??? Magnifique!

I’ve never seen any of these films (am indeed woefully ignorant of Wuxia in general) so you have once again revealed what were hidden treasures. My thanks.