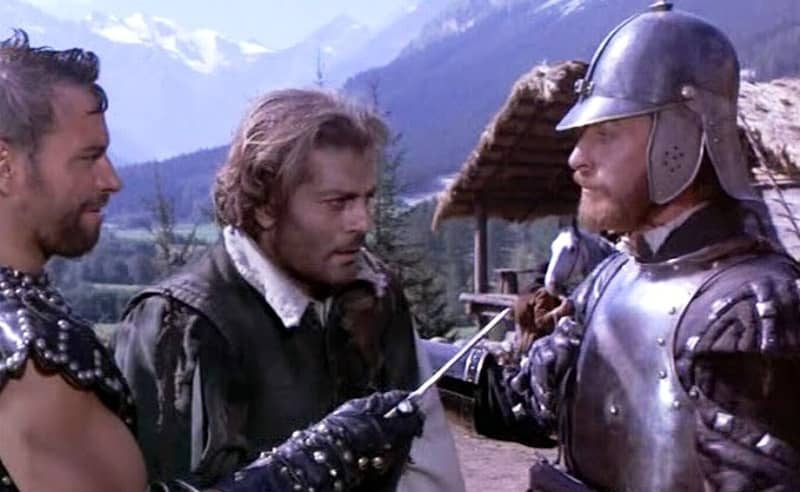 Was it, though? In the case of the 1972 Treasure Island, absolutely. With a book that good, and with such stirringly visual material, it’s hard to fail at a cinematic adaptation, though this version comes closer than most. However, when it comes to Ivanhoe, give me a screen version, any screen version, over having to read the book again. Brrr! Then, there’s The Last Valley, based on a novel by J.B. Pick that hasn’t crossed my path, so whether the movie is better than the book is a question I can’t answer. Maybe you can, though, so we’ll start with that one. As you’ll see, books win in the end.

Nowadays we think of James Clavell as a novelist, but early in his career, as a screenwriter and director, he made more films than books. After To Sir, With Love (1967) was a huge hit, he had enough leverage to produce, write, and direct this movie, based on a 1959 novel by J.B. Pick. The Last Valley is set during the middle of the Thirty Years’ War (1618-1648), one of the most horrific episodes in all of European history, a religious conflict between Catholics and Protestants that slaughtered nearly half the population of Germany. It was no fun at all, so in that regard at least this movie is historically accurate.

Vogel (Omar Sharif), an intellectual refugee who survived the annihilation of Magdeburg, flees through the war-torn countryside, but everywhere he’s confronted by more death: starvation, plague, and most of all murder by ravaging soldiers on both sides. He runs into the deep forest, crosses a mountain, and finds… paradise. A valley, peaceful and prosperous, that has somehow been untouched by the war. But on his heels comes a hardboiled mercenary troop with a leader known only as the Captain (Michael Caine). He is determined to plunder the valley, but Vogel persuades the Captain to simply occupy it and spend the winter there, safe for a time from the war.

But there are factions and personality conflicts among both the mercenaries and the villagers, and things get complicated. The village headman, Gruber (Nigel Davenport), plots the murder of the mercenaries, the overzealous Catholic priest wants to root out heresy, the soldier Hansen (Michael Gothard) wants to rape and pillage as he pleases, the young villager Inge (Madeleine Hinde) falls for Vogel, and the Captain falls for Erica (Florinda Bolkan), who’s a secret Satanist.

Most of these characters are nuanced and multi-sided and their stories are interesting, but impending doom haunts every relationship. Eventually, after trying to force himself on Inge, Hansen escapes the valley, only to return leading an invading company larger than the Captain’s. However, his return is expected, and the villagers and Captain’s men join to ambush and slay the invaders.

But now things are spinning out of control. News comes that the Protestant army paid by Catholic France is on the advance, and the Captain decides to join them. When he leaves with most of his men, the détente in the village unravels and Vogel’s life is once more in peril.

This movie looks great; the scenery is majestic, the costumes and gear are authentic and even striking, it has a memorable soundtrack by John Barry, and you have to admire the performances of Caine, Sharif, Davenport, and Bolkan. But it’s a two-hour-plus bummer with no redemption for anybody, and it’s no wonder that it was a complete flop at the box office. Okay, we get it, there are no winners in wars of hatred, only losers. That includes Brian Blessed, who’s in the beginning of the film for about four minutes as a mohawked thug named Korski whom the Captain kills with the pointy spike on his helmet. Brian, noooo…!

After this film’s resounding failure, James Clavell gave up on moviemaking and returned to books, because he thought he had an idea for a good one. It was Shogun (1975), which turned out to be the biggest historical fiction bestseller of the Seventies. 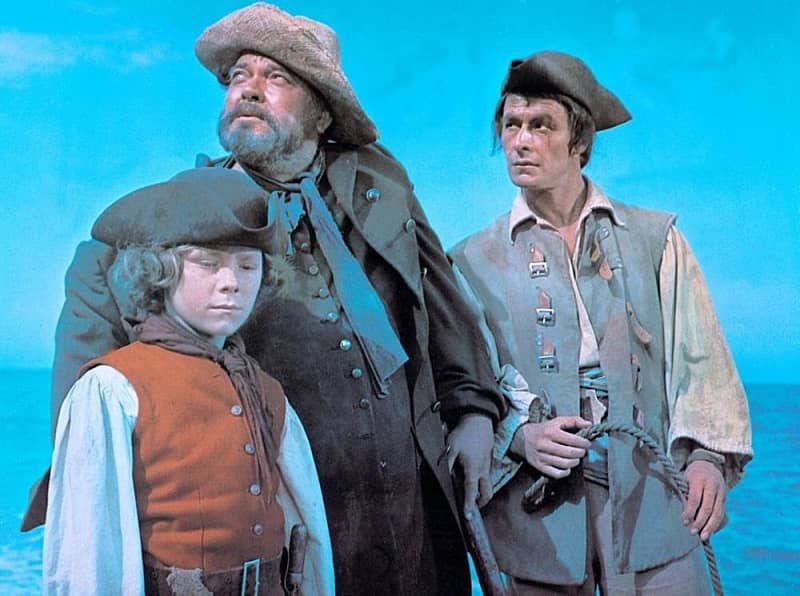 They dubbed Orson Welles. They got Orson Welles to play Long John Silver, one of the foremost scoundrels in English literature, and then they dubbed his voice. SMDH.

That bizarre decision aside, the main problem with this version is its painfully low budget and weak production values. This film was shot in Spain in a mere seven days, and it looks it. Fortunately, the cast is decent: Welles as Silver and Walter Slezak as Squire Trelawney are past their glory days but still good, Italian action star Rik Battaglia is a properly gritty Captain Smollet, and they have a solid Jim Hawkins in child actor Kim Burfield.

The pacing’s a bit slow until the Hispaniola reaches the island where Flint’s treasure is buried, but after that it picks up nicely and jogs right along to the end. The classic story holds up well to the indignity of cheap costumes and poor lighting, and despite everything one still gets swept up in Jim Hawkins’ desperate ventures and hairsbreadth escapes. But compared to the superb 1934 and 1950 adaptations, this version is sadly lacking. 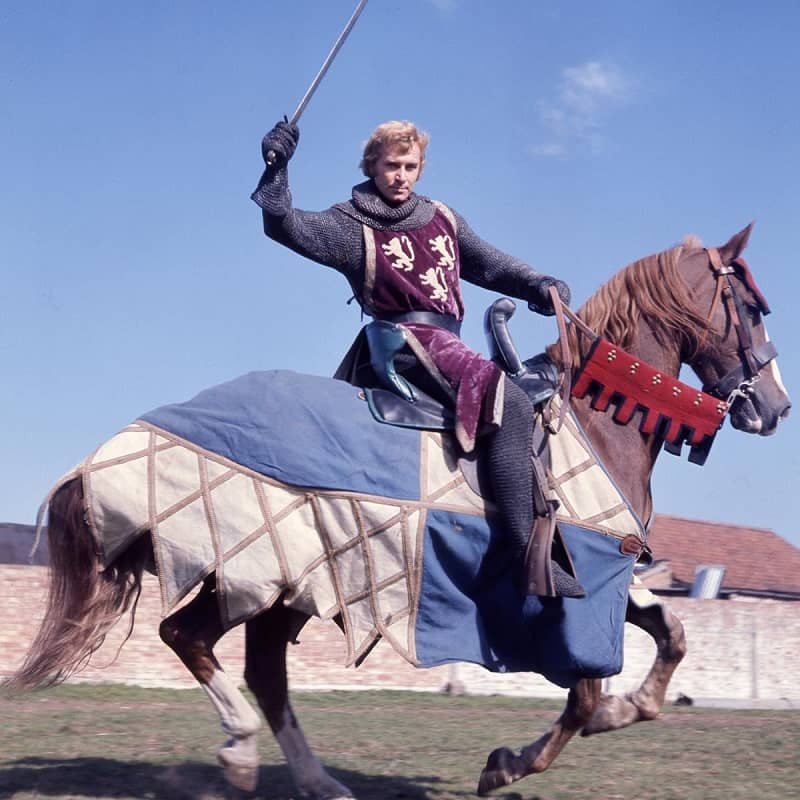 I’ve read Walter Scott’s Ivanhoe (1819) because it’s in my line of work, but if you haven’t, trust me, it’s a lot of hoary old hifalutin bombast, and you’re better off watching a decent screen adaptation; the story is ripe for the cinematic treatment because it has the good strong bones of a melodrama that’s serious about its excesses. This BBC TV adaptation devotes ten 25-minute episodes to the novel, which is enough time to include nearly all the plot, and because it’s the BBC it’s pretty faithful to the book.

It doesn’t start off very well: Cedric the Saxon is played by Peter Dynely as a one-note obstreperous blowhard, and the main qualifications of Eric Flynn to play his son Ivanhoe seem to be blond good looks and a cleft chin. But then the villains weigh in, and they’re mostly played by the fine stage-trained British actors you expect in a BBC production: Roger Bizley as the Norman knight de Bracy and Noel Coleman as Fitzurse are particularly good. However, they’re both outdone by Anthony Bate as Bois Guilbert, the lead villain, who is arrogant and cruel but tormented by his illicit love for a good woman. Juicy!

The story is a knightly love quadrangle between the noble Ivanhoe, who loves his father’s ward the Lady Rowena (Clare Jenkins), and the healer Rebecca (Vivian Brooks, quite good), the daughter of Isaac the Jew, who is loved by the wicked Templar Bois Guilbert, the problem being that both women love Ivanhoe and despise Bois Guilbert, while Ivanhoe and Bois Guilbert are locked in a blood feud that started when they were both on crusade in Palestine. Got that?

Moreover, Cedric wants Rowena to marry Athelstane, the last royal Saxon, while Prince John wants to steal the throne from Richard Lionheart who is on his way back from the Third Crusade, so the Norman villains capture all the Saxon and Jewish heroes and imprison them in Torquilstone Castle, and then it’s up to the Black Knight and Robin Hood and Friar Tuck to get them out. Of course.

Scott’s genius as a storyteller is that this claptrap all makes sense in the moment, and if things slow down somebody just rings a bell or blows a horn to signal another attack or ambush. Sadly, the knightly combat here is awful, complete crap, though the archery and quarterstaff action isn’t bad. The costumes and sets are bottom of the barrel, but hey, BBC. The script is by Alexander Baron, and to his credit, he deals with the woeful racism of the novel by putting all the prejudice front and center and letting it stink for itself.

Refusing to soft-pedal the wretched attitudes of even the sympathetic characters is a brave decision that opens a window to the past — by which I mainly mean Scott’s 1819 rather than Ivanhoe’s 1194. If you’re interested in the popularization of tales of chivalry in the Romantic Era and in the 19th century revival of the Robin Hood legend, you need to start with Ivanhoe — but do yourself a favor and watch this instead of reading the book.

Hey – Sunday’s ‘Summer under the Stars’ star is Tyrone Power. The Mark of Zorro is in the mix, with some other good non-swords stuff.

The best Treasure Island by far is the 1990 television version, directed by Fraser Heston and starring Charlton Heston as Long John Silver and Christian Bale as Jim. It also features Christopher Lee, Oliver Reed, Richard Johnson, and Pete Postlethwaite – I mean, c’mon! The whole production is superb in every way.

Agreed – I loved that version

Perhaps my tolerance for hifalutin bombast is higher than yours; I recall enjoying Ivanhoe. Or maybe I had a higher tolerance as a kid and would find it insufferable now.

I’m with Ken – I read Ivanhoe last year and thought it was a blast. The miniseries I haven’t seen, but I have a soft spot for the 1952 movie, slow as it is in spots. Why? Two words: Elizabeth Taylor.

Another Ellsworth’s Cinema of Swords??? Thank the Lord!

I’ve never seen the Last Valley and I have no interest in watching any film that treats Brian Blessed in such a manner. Petty of me, but there it is.

Never saw that version of Treasure Island either (they DUBBED Orson Welles?) and I think I’ll avoid it, the other three versions on film are quite good enough. That 1990 TV version IS quite good.

I have to go with Ken and Thomas here, Mr. Ellsworth; Ivanhoe is a bit stilted but I think it remains a great story. I haven’t seen this 1970 series yet, but the 1952 movie and the 1997 series were good, with George Sanders and Ciaran Hinds respectively as the villainous Bois Gilbert and Elizabeth Taylor at her most luminous in the film.

Thanks for the tip, Mr. Byrne! I’m always up for some Mark of Zorro.

I liked the Last Valley. Yes the plot was klunky but in terms of historical accuracy and performances by Michael Caine, Omar Shariff and others it was a great film.

It’s a rule that “The book is ALWAYS better than the movie.”

Will be that way until or rather UN-till (as in non but impossible but…) I find a time machine, do some “Compound Interest” stunts, make a billion and fully fund Jodorowsky in his “Dune” movie project, also bringing back a modern computer for CGI effects… And, no it would have caused riots, the early death of Frank Herbert, Sci-Fi/Fantasy in Cinema would be set back a while.. Later it’d be appreciated as brilliant.