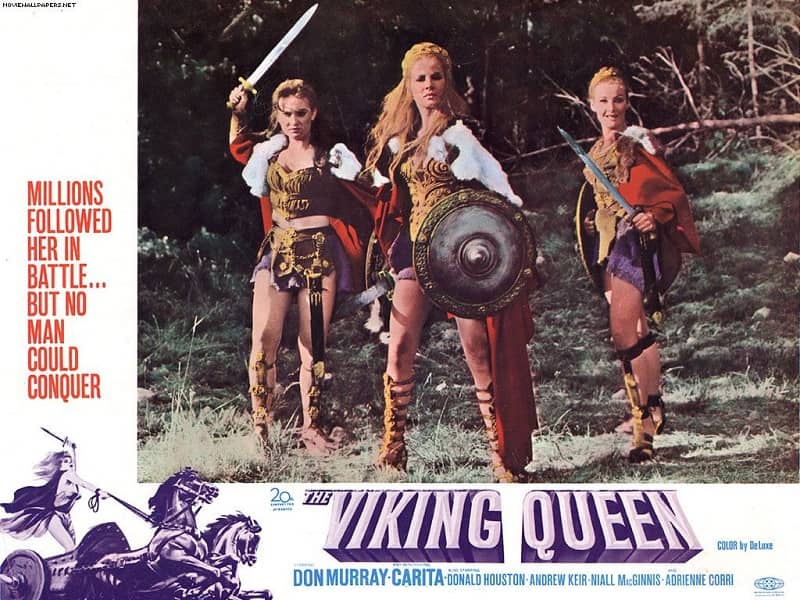 Though by 1967 the Hammer Films brand was thoroughly associated with Dracula and similar horrors, the studio stubbornly continued to turn out films in other genres, including historical swashbucklers. Our first film, The Viking Queen, definitely has that sensational Hammer touch, but A Challenge for Robin Hood could almost be a Disney film, which shows late-Sixties Hammer productions could still have a considerable tonal range.

Admittedly, our third movie, Alfred the Great, isn’t from Hammer Films, but hey, it’s British and from the same period, and it’s worth a look, so give me a break, okay?

This Hammer Films historical adventure set in Roman Britain should really be called The Celtic Queen, but apparently Vikings sell movie tickets while Celts do not. Marketing, am I right? The story is based loosely on that of Britannic warrior queen Boudica: the aging king of the Iceni Britons, weary of war with Rome, wills on his deathbed that the rulership of his kingdom be shared peacefully between her daughter Salina (Finnish model Carita) and the Emperor Nero, represented in Britain by Governor General Justinian (Don Murray). However, Queen Salina’s druid advisors want war to drive out the hated Romans, and Justinian’s military advisors want war to send more enslaved Britons to Rome, but Salina and Justinian fall in love after a super-sexy chariot race through the woods and decide to make love, not war. With everyone else conspiring for conflict, this doesn’t work out well for them.

A case could be made that Salina and her two sisters, who become warrior women driving battle chariots, represent female empowerment, but that case is badly undercut but a treatment that verges on exploitation, with gratuitous partial nudity, rapine, and whipping. The film’s lukewarm leads, Carita and Murray, turn in barely adequate performances, while Donald Houston as Arch-Druid Maelgan is just obnoxiously terrible, shouting every line and sputtering through his fake facial hair. Geez, dude, go hug a tree and chill.

Still, though Hammer films may be lurid they’re always competent, so there’s stuff to like here. Patrick Troughton, in his last role before Dr. Who, is a standout as Salina’s wise advisor Tristram, and Adrienne Corri (Sword of Freedom) is fine as Salina’s fiery sister Beatrice. The exteriors were shot in Ireland’s lovely County Wicklow, and there’s nothing like watching a column of legionaries winding their way through heather-covered hills to evoke the feel of the far-flung fringes of the Roman Empire. On the action side, the combat scenes of Britannic war-chariots hurtling into shield-walls of Roman cohorts, directed by Don Chaffey (Jason and the Argonauts), get the job done, and if the body count by the end includes just about everybody in the cast, well … what did you expect from a late-Sixties Hammer film? 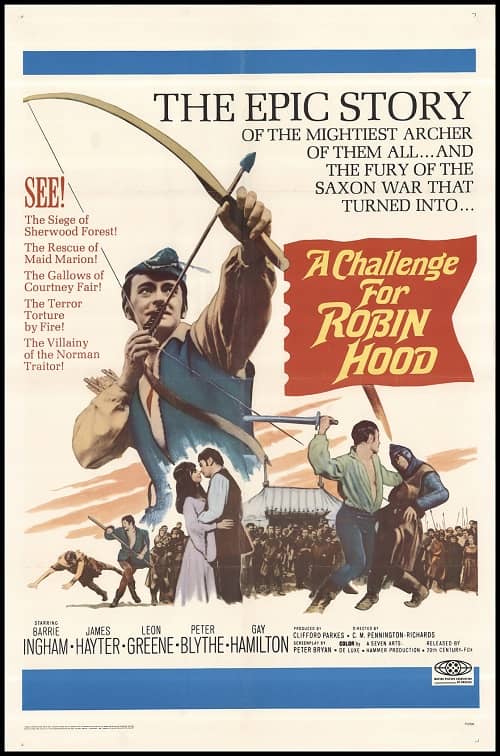 A Challenge for Robin Hood

Stump your film-fan friends! Ask them, “Did Hammer Films make one Robin Hood film or two?” Then, no matter how they answer, push up your glasses and say, “Actually, depending how you count them, they made at least three.”

This is the third, and it’s pretty good, an effective recombination of the legend’s familiar elements. Robin de Courtenay (Barrie Ingham) is a nephew of the aging Norman lord John de Courtenay, a good man whose wicked sons Roger (Peter Blythe) and Henry (Eric Woofe) can hardly wait to see him shuffle off this mortal coil. While out hunting, Roger de Courtenay (the wickedest son) spies a poacher and kills him without knowing or caring that he’s the former Lord Fitzwarren, a Saxon who’s been forced into poverty. Robin steps in and prevents Roger from killing Fitzwarren’s son, which earns him the grudging admiration of the Sherwood outlaws. When Lord de Courtenay, on his deathbed, splits his inheritance between Roger, Henry, and Robin, wicked Roger, to get the whole shebang, murders Henry with Robin’s dagger, and Robin, proscribed, must flee to the greenwood and join the outlaws. You know how it goes from there.

Considering it was made by Hammer, this is a surprisingly family-friendly movie, high-spirited and good-hearted without being sappy or silly—well, except for the pie fight at the country fair, but that’s over quickly. Though lacking any real standouts, the main cast is all well up to the job, the best being Ingham as Robin, James Hayter as Friar Tuck, Leon Greene as Little John, and the villains, Blythe as Roger de Courtenay and John Arnatt as the Sheriff of Nottingham. The only real disappointment is Gay Hamilton as Lady Marian Fitzwarren, who’s too young for the part and out of her depth. (She’s much better a few years later on in Barry Lyndon and The Duellists.)

A Challenge for Robin Hood really marks the end of the era of screen versions of the outlaw archer that began with Errol Flynn in The Adventures of Robin Hood in 1938. After this movie the Robin Hood genre disappears until the making of the first of the “revisionist” Robin Hoods, Richard Lester’s Robin and Marian in 1976. After that, Robin Hood on screen becomes one new reinvention after another, and that’s no bad thing. But you can still enjoy this last hurrah with the trad Merrie Men in Sherwood before times inevitably changed. 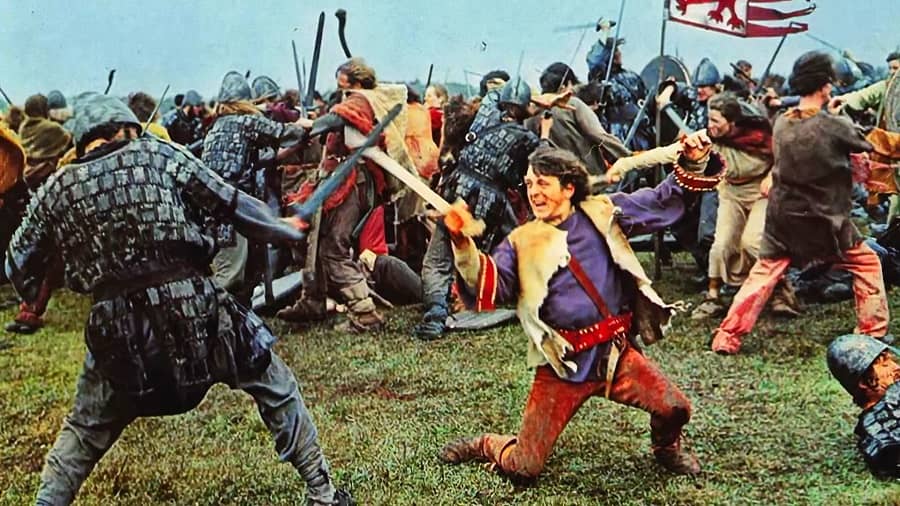 This film flopped upon release in 1969, and it’s easy to see why: out of step with the times, it’s too slow, too long, and too self-important, while the lead, David Hemmings as King Alfred, overacts and is no fun. The historical Alfred should be a good subject for a film, so what the hell?

To be fair, it starts out well: it’s the 9th century in England, and the scholarly Prince Alfred, about to be confirmed as a priest, is called away by his brother King Aethelred of Wessex (Alan Dobie) because the Danes under King Guthrum (Michael York, quite good) are invading. Aethelred is wounded, so Alfred reluctantly takes command of the troops, comes up with a brilliant tactical plan, and defeats the Danes in a battle that’s as period-authentic as anyone could wish. Prince Alfred marries Princess Aelswith of Mercia (Prunella Ransome, quite dull), Aethelred promptly dies, Alfred is proclaimed king—and then proceeds to spend the next 90 minutes making mistake after mistake. Come on, royal dude! He mistreats his queen, alienates his nobles, gives Aelswith as a hostage to Guthrum, loses a battle to the Danes, and is driven into hiding in the marshes. As a captive, Aelswith even bears Alfred’s son and then gets involved with Guthrum. D’oh! Alfred is angsty about it.

But then, while spying on the Danes, Alfred is captured by the bandits of the marshes, whose leader Roger is played by none other than Ian McKellen, and the movie is saved. In a daring raid with Roger’s help, Alfred abducts his wife and son from Guthrum, and then builds a coalition of nobles and commoners to resist the Danes. He learns about Greek phalanxes from a book in a monastery, musters his forces, and defeats Guthrum and company in a climactic battle. Whew!

Director Clive Donner got the job because he’d never done a historical epic and the producer wanted to avoid clichés, which sort of worked: the clichés of historical epics were avoided, but not those of Donner’s previous specialty, stories of overwrought and tormented youth. To its credit, every effort was made to get the 9th-century details right, and the movie was shot far from modern civilization in County Galway in western Ireland, so it mostly looks good, barring a few murky interior scenes lit only by torches. For most of the picture Hemmings chews the scenery to shreds, but when he isn’t McKellen and York declaim effectively like proper British-trained stage actors, with strong support from Colin Blakely as Alfred’s monkish chum. Their efforts make this film worth seeing. (Once.)

Coincidentally, the TV series ‘Vikings’ is also shot on the banks of Lough Tay* which was used as a location in ‘Viking Queen’.

* until recently part of the Guinness Estate.

I’ve seen both The Viking Queen and Alfred the Great but that Robin Hood movie is completely new to me. I’ll have to look it up. Thanks for the tip!