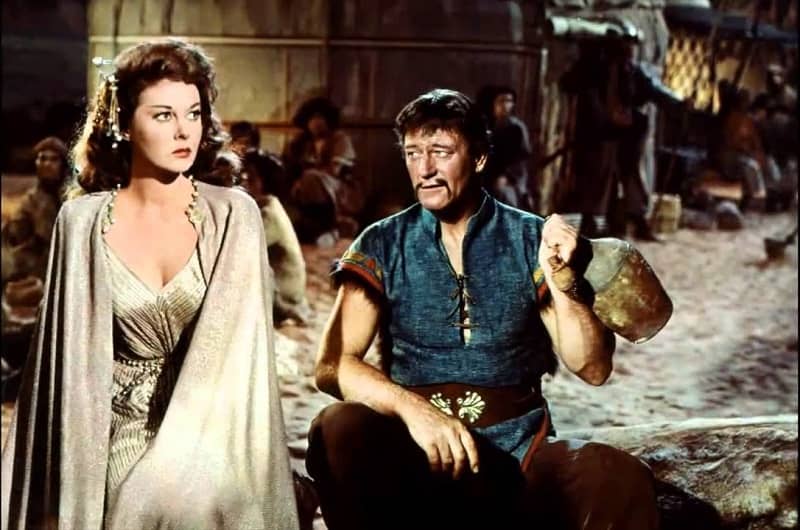 Let’s get barbaric! Preferably on horseback in central or western Asia. Our first movie, John Wayne as Genghis Khan in The Conqueror, is so terrible that it’s famous for being terrible, while our second film, The Tartars, is just as terrible but unfairly and surprisingly overlooked, especially since one of its stars is Orson Welles. Ah, but our third movie, Taras Bulba…. Now that’s good stuff. So, ferment some milk, shave your skull except for a scalplock, and leave your effete civilizations behind, because we’re going steppin’ on the Steppes!

(And by the way, if this kind of setting is to your taste, you’re going to love the Harold Lamb short story collections edited by our own Howard Andrew Jones, stories that were a major inspiration and influence for Robert E. Howard. The books, including all four volumes of The Complete Cossack Adventures, plus Swords from the Desert, Swords from the West, Swords from the East, and Swords from the Sea, are still available in digital format — and if you move quickly, there may still be a few print copies left.

This is the legendarily awful Howard Hughes-produced turkey in which Big John Wayne is incredibly miscast as Big Genghis Khan. However, miscast though he was, Wayne got the part because he wanted it, and you can see why: the role fulfills the male barbarian fantasy in which manly men kneel to you because you’re the toughest, the loudest, and most brutal, and desirable women love you even though you beat and sexually assault them because they just can’t help themselves. Also, Mongol mustaches.

Nothing in this noisy shambles of a movie makes a lick of sense, it’s just nonstop riding and raiding and abductions and surprise attacks, surprises that always work because everyone on every side is a dope who will fall for anything. Wayne’s “blood-brother” Jemuga (Pedro Armendariz), supposedly a brilliant tactician, gets captured no less than three times by his enemies, which are everybody. The Mongols hate the Merkits, the Merkits hate the Tartars, the Tartars hate the Mongols, and everyone hates the Han Chinese. (Accurate.) There are plots and counterplots sending everybody blundering about the desert at a full gallop while waving their swords.

But what you want to know is, is this travesty just bad-bad, or is it hilariously funny-bad? Given Wayne’s bombastic delivery of his totally cringeworthy dialogue, it definitely skews toward the latter. Hearing Wayne say stuff like, “Dance, Tartar woman — dance for Temujin!” or (to Agnes Moorehead) “You didn’t suckle me to be slain by Tartars, my mother!” — it’s just wonderful, and there’s so, so much of it because he never shuts up. “She’s a woman, very much a woman. Could her perfidy be less than that of other women?” Come on, you can’t ask for better entertainment than that.

Except for one lone Asian actor, cast as a treacherous Chinese shaman, every speaking role is filled by a Hollywood Caucasian, and few of them are able to emulate Wayne’s enthusiasm for their lines, most of the time just looking vaguely embarrassed (except for Robert Conrad and Lee van Cleef, who are shameless, as you would expect). Poor Susan Hayward as “the Tartar woman,” one of the foremost leading ladies of her day, just pouts angrily in every scene, except when she has to pretend helpless passion for Wayne. You have to pity her.

Alas, the film was entirely shot downwind of a Fifties atomic testing range, and by the Seventies the director and nearly all the leads had died of cancer, which also afflicted the rest of the cast and crew at three times the normal statistical rate. A sad coda for what is otherwise a sort of trash masterpiece, but to quote the Conqueror himself, “What venture is without hazard?” 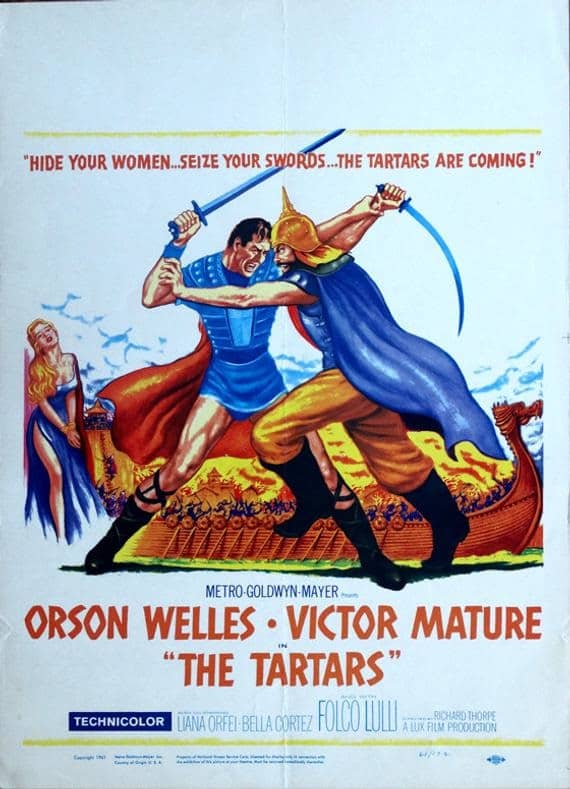 This just isn’t any good. On the Russian steppes, sometime in the Middle Ages, a mini-horde of Tartars invites a tribe of Vikings to join them in attacking their pals the Slavs, but the Vikings refuse, and Tartars … they just don’t handle disappointment well. Arrows and axes fly, and Viking chieftain Oleg (Victor Mature) kills the brother of Khan Burundai (Orson Welles), taking his daughter hostage as a bonus. In retaliation Burundai takes Oleg’s wife hostage, rapes her offscreen, and then everything goes rapidly and brutally to hell. The mini-horde attacks the Viking stockade, Oleg and Burundai meet in ridiculous single combat, and it’s so bad it’s not even funny.

The stereotypes are strong here: right in the opening narration we’re informed that the Vikings, who are forthright and friendly, are Good, and the Tartars, who have droopy mustaches and sinister shifty eyes, are Bad. The Orientalism is over the top, featuring giant gongs, acupuncture torture, and scandalous “exotic” dancing. This film is pretty much a career low for everyone involved, especially director Richard Thorpe, who less than a decade before had helmed near-classics “Scaramouche” (1952) and “Ivanhoe.” Every single person involved with this picture was phoning it in, including the entire nation of Yugoslavia where the exteriors were filmed. In the end almost everyone dies — but from a fiasco like this, death is sweet release. 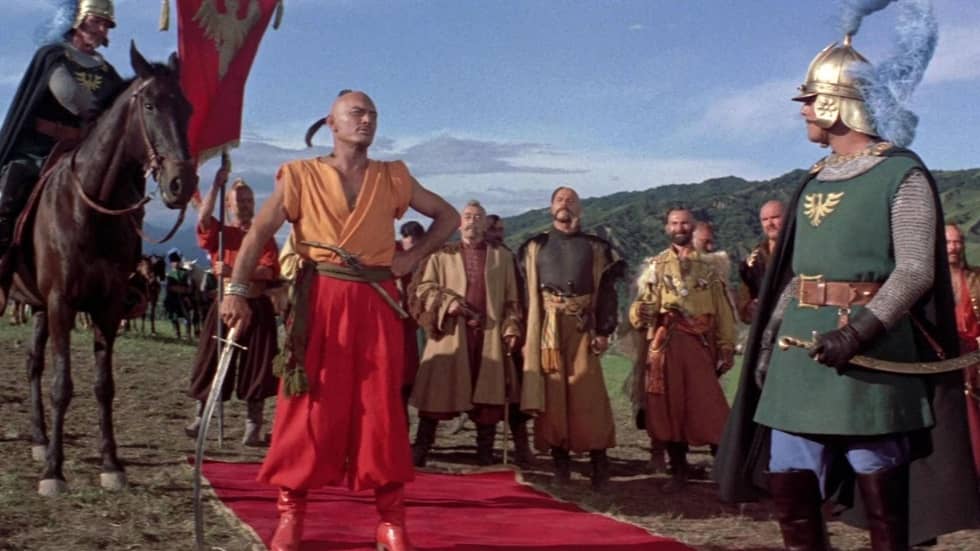 If you’re in the market for an epic Cossack cavalry spectacle, this is your one-stop shop. Like the Vikings, the Cossacks were big jerks, but they had an undeniable flair. And nobody ever embodied that flair better than Yul Brynner as Taras Bulba. He’s unforgettable.

The story, based on a short novel by Nikolai Gogol, is set in the 16th century on the Ukrainian steppes (but was shot on the vast expanses of the Argentine pampas). It opens with a cavalry battle, but this isn’t just gratuitous action, it establishes the situation. The Ottoman Empire, attacking from the south, has run into the Polish Empire, expanding from the west, and the Poles are getting the worst of it until their new allies, the Cossacks, charge onto the scene. The Cossacks rout the Turks, but then the Polish artillery, which had been held in reserve, treacherously blows the Cossacks to smithereens — but not before Taras Bulba severs the Polish governor’s right hand.

The Cossacks are defeated and must bow to Polish sovereignty, but Taras swears the situation is only temporary. He has two sons, the eldest of which is Andrei (Tony Curtis), and when they’re old enough Taras sends them to the Polish academy in Dubno to learn the ways of their enemies. But what Andrei mainly learns is to fall in love with Natalia (Christine Kaufmann), a Polish princess. Kaufmann might be a fine actress but you can’t tell it from this film, because all she’s given to do is to look dewy-eyed at Andrei. (Apparently that was good enough for Curtis: he married her.) When Andrei’s forbidden relationship with Natalia is discovered, he and his brother are driven out of Dubno, arriving back at home just in time to learn that the Cossack war banners are being raised in a call for vengeance on the Poles. But Andrei’s love affair will cause tragic complications.

Besides Brynner’s commanding screen presence, and the cavalry battles, of which there are plenty, the fun here is in vicariously hanging out with the rough and rowdy Cossacks at their barbaric revels, which include plenty of Stupid Cossack Tricks like blanket-tossing, bull-ox-riding, crossing a balance beam over a bear pit while chugging vodka, and leaping a narrow gorge on horseback to prove who’s the real coward. We also get the ever-villainous George Macready as the vile Polish governor, and what many consider composer Franz Waxman’s greatest movie score, a rollicking gallop that evokes the mounted Cossacks sweeping across the steppes. There are issues with director Thompson’s confusing management of closeups in the battles, but the striking longshots of the Polish and Cossack troop movements make up for it. And when plague strikes Dubno after the Cossacks put it under siege, the driver of the corpse-wagon actually gets to ring a bell and call, “Bring out your dead!” Talk about living the dream.

What a fun article! I’ve wanted to check out John Wayne as Genghis Khan, but this has inspired me to go for it.

Susan Hayward was one saucy Tartar!

Yul Brynner was kind of Hollywood’s go-to for every vaguely ethnic role, wasn’t he? Cossack, Mesoamerican (in Kings of the Sun), Egyptian (so let it be written; so let it be done), Thai, Russian, etc., etc.

I came across ‘The Conqueror’ by accident one afternoon while channel-hopping, and was mesmerised. I just couldn’t believe I’d never heard of it before. The fact that JW was actually eager to play the role makes it doubly astounding. I think there are quite a few clips on Youtube? (If you’d like to know what you’re letting yourself in for beforehand).

I saw The Conqueror and Taras Bulba years ago and frankly the only thing I can remember clearly about either film is the beauty of the female leads; Susan Hayward and Christine Kaufmann were gorgeous. I’ve never even heard of The Tartars, apparently for good reason. Thanks for the warning.

Can I throw into the mix the last of Tyrrone Power’s venture with the sword, “The Black Rose”, where a Saxon scholar goes off to China with some chums and meet the Mongol Hordes led by Orson Wells. Jeffery Richards in his book “Swordsmen of the Screen” (a cracking study of the swashbuckler movie) describes the action thus, “the Mongol armies keep marching and never get anywhere and in which the scant action is confined to a mild castle rescue, an archery contest and a modest escape bid”. Watch at your peril.

Great article! Have you seen Tomiris? Recent Khazakitani film, pretty exciting, and a female protagonist. I was thinking of Tarus Bulba while watching it.