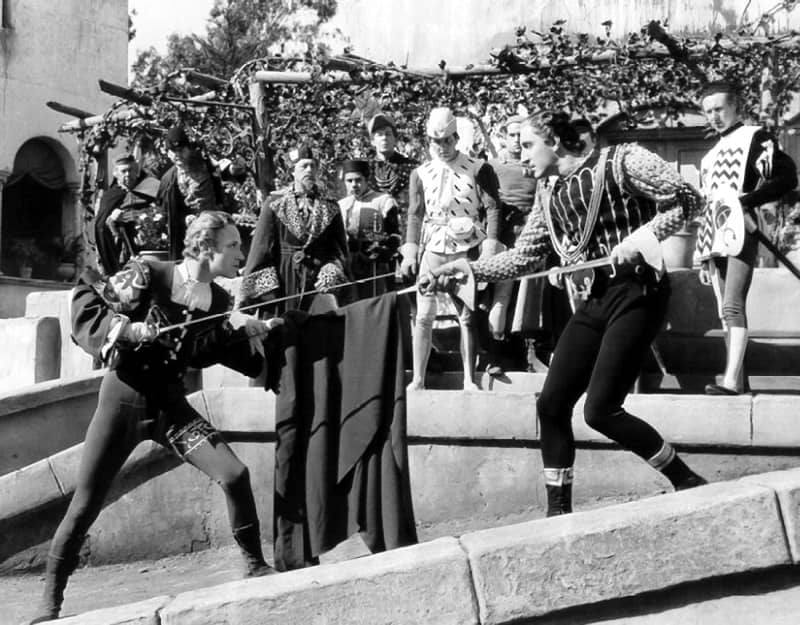 William Shakespeare was the greatest playwright in history (fight me!), but his record as a screenwriter is, shall we say, uneven. There’s a long list of films adapted from or inspired by the works of the Bard of Avon, but most of them are considerably less memorable than their sources. However, sometimes a filmmaker steps up and meets the challenge and the result is a movie one can watch over and over with admiration and pleasure. Here are three films based on Shakespeare that also play regularly at our notional Theatre of the Crossed Swords. [Insert favorite Shakespeare quote here!]

What’s Romeo and Juliet doing in the Cinema of Swords? Isn’t that a love story? It is, but this version is a love story punctuated by four superb rapier duels, three of them involving Basil Rathbone, and one of those is against Leslie Howard — that’s right, Sherlock Holmes crosses swords with the Scarlet Pimpernel!

In 1935 Warner Bros. had just released Shakespeare’s A Midsummer Night’s Dream with an all-star cast, and MGM didn’t want to be out-Barded, so they opted to make Romeo and Juliet, which producer Irving Thalberg conceived of as a starring vehicle for his wife, Norma Shearer. Then-popular Leslie Howard was cast as Romeo, John Barrymore as the droll Mercutio, and Basil Rathbone as the fiery Tybalt; they were all too old for the roles of hot-headed teenagers, especially Barrymore at age 54, but Thalberg wanted actors who could handle both the Shakespearean language and a sword, which narrowed the field.

This was a prestige production for which MGM pulled out all the stops, and sumptuous doesn’t even begin to describe it. The astounding costumes alone, theatrical but inspired by authentic Renaissance designs, are reason enough to watch this, and even if Shakespeare isn’t to your taste, the acting is so good you may just like it anyway. At the Oscars, the film was nominated for Best Picture, Best Actress (Shearer), and Best Supporting Actor (Rathbone), but it was a dog at the box office and Hollywood wouldn’t touch Shakespeare again until the late Forties. But, hey, it still has those tasty, tasty duels. 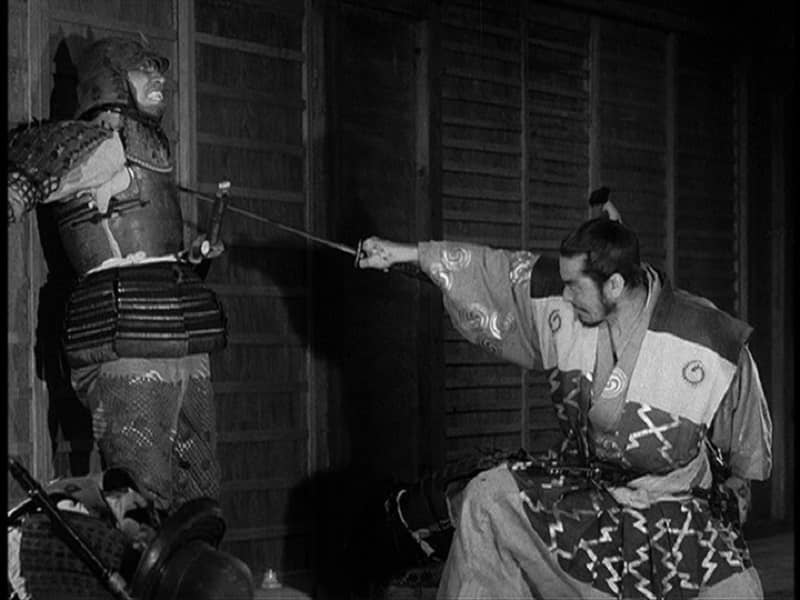 This is a stark, brutal, black-and-white adaptation of Macbeth that relocates the story from medieval Scotland to samurai Japan, replacing Shakespeare’s sonorous language with the stylized imagery of classical Noh theater — so, yeah, it’s not a movie for everybody. It’s a fast ride to Hell on the horses of greed, ambition, and betrayal, with few (if any) sympathetic characters, shorn of even the lukewarm reassurance found in Shakespeare’s moralistic finale. Bummer.

But if you can get past, or even better, embrace all that, you’ll find that director Kurosawa’s third samurai film is rich with vivid scenes you’ll never forget. To name a few: the encounter in the haunted forest between Generals Washizu (Toshiro Mifune) and Miki (Akira Kubo) with the pale and malevolent witch who foretells their fates. The brooding intensity of the murder scene in which Washizu’s wife, Lady Asaji (Isuzu Yamada), hands him the spear with which he is to assassinate their guest, his reigning lord, and her tense wait for him to return, shaken, his hands clotted with blood. The siege of the great black castle on the barren slopes of Mt. Fuji where Washizu, now the reigning lord himself, pays the price for his betrayals in a hissing storm of hurtling arrows.

Most of all, you’ll remember the coldly poisonous voice of the relentless Lady Asaji, and Lord Washizu’s panicked glances from behind his fierce martial visage, the look of a trapped animal who sees no way to go except deeper into the trap. Yes, it’s very different from an uplifting action movie like The Seven Samurai in which heroic warriors fight desperately against the odds, but on its own terms, Throne of Blood is a very great film indeed.

Chimes at Midnight (or Falstaff)

“Thou owest God a death.”

This is Orson Welles’s retelling of the life and death of Sir John Falstaff, one of Shakespeare’s greatest characters, with a script drawn from five of the Bard’s plays, but reframed and reordered to suit Welles’s purpose, which is to find the heart beneath the surface of the rogue. This is a great film — Welles himself considered it his best, and I’d not dispute it — as visually rich as it is audibly challenging, because unlike many cinematic adaptations of Shakespeare, where the language rings out with clarity and force, here it’s often spoken in haste or muttered low and indistinctly. Welles forces you to listen closely and pay attention to what’s being said, and it gives Shakespeare’s words a new sort of power, an unfamiliar weight as they emerge from obscurity as spoken, to clarity as heard.

But this is the Cinema of Swords, so enough about words: this film’s great contribution to our genre is almost entirely wordless, the twenty-minute Battle of Shrewsbury at the heart of the movie between the forces of King Henry IV (John Gielgud) and his son the Prince of Wales (Keith Baxter) against the rebellion of Northumberland (José Nieto) and his son Harry “Hotspur” Percy (Norman Rodway). The battle, when the two sides come to grips, is a storm of chaos, muddy, bloody, and inglorious, shocking and lethal, horrific and absurd. Welles wanted the viewer to recoil from warfare rather than revel in it — and yet, the single combat between the Prince of Wales and Hotspur, though sharp and brutal, is nonetheless exciting, forcing the viewer to consider their own attraction to its violence. Influenced by Eisenstein before him, Welles’s depiction of the fury of men in battle was a powerful influence on later films, including Spielberg’s Saving Private Ryan and Branagh’s Henry V, itself a sort of sequel to this film.

Welles shot this movie on a shoestring at medieval locations in Spain, and in many ways it’s raw and unpolished, but that just makes its remarkable visuals all the more striking. Don’t go into Chimes at Midnight expecting a slick, easy-to-swallow commercial production, because that’s not what this is. This is art, unvarnished, unsettling, unexpected, art that laughs at humanity and loves it for all its flaws, and Welles’s portrayal of Falstaff is indelible. Orson, for all those wretched wine commercials, you are forgiven.

Another Ellsworth’s Cinema of Swords? Geronimo!

I am of the opinion that if you wish to write dialogue in English, you should first listen to Shakespeare. His work is entwined with the roots of English as we speak it today and the best writers of dialogue seem to be well acquainted with the Bard. Take Fritz Leiber for example.

The two English language films here are superb examples of how hearing Shakespeare can be quite different from reading Shakespeare, especially when it is spoken by some of the best actors of the 20th century. But that doesn’t mean you should ignore Throne of Blood. I don’t know how he did it, but Kurosawa managed to move the Accursed Play from Scotland to Honshu while keeping its stark, dark magic and giving it an even bleaker ending.

Everyone should see these films at least once.