What? Has Lawrence run out of theme ideas? Has the well gone dry at last? Perish the thought! I was just looking at my list and saw there were several movies with “Sword” in the title that we hadn’t covered yet, and they’re all worth discussing, so here we are.

The Sword and the Rose

This is based on the popular 1898 novel When Knighthood Was in Flower by Charles Major, a Victorian historical romance that had been filmed twice before in the silent era, and has just enough swashbuckling in it for inclusion here. Despite its title, it’s not set in medieval times but during the early reign of King Henry VIII, telling the story of his sister, Princess Mary Tudor, and her (largely unhistorical) love for Charles Brandon, a mere captain of the guard. Brandon is played by Disney’s chosen leading man of the time, Richard Todd, in perhaps his best performance, though he was better known for Dam Busters (1955). Princess Mary is played by Glynis Johns, who has the impossible task of making her willful and selfish character seem adorable, but she’s so good she almost pulls it off. The leads are supported by a cast of fine British actors that includes James Robertson Justice as King Henry, Michael Gough as the Duke of Buckingham, and Rosalie Crutchley as Queen Katherine, all benefiting from a strong script with a lot of cutting gibes and haughty rejoinders.

To the plot! King Henry wants to marry his sister to King Louis XII of France, but Mary wants no part of that dynastic nonsense and instead sets her heart on the dashing but far-from-royal Brandon; Buckingham, however, wants Mary for himself and is lethally jealous. Court intrigue and illicit love ensue. Brandon ends up in the Tower of London while the princess is married off to the aged Louis of France, but not before she extracts a promise from Henry that she can choose her own second husband when the time comes. Buckingham engineers a phony jailbreak from the Tower so Brandon can be killed while escaping, but he survives. In due course Louis of France dies but his son, the new King Francis, wants Mary for himself; Buckingham and Brandon go separately to France to retrieve her and meet in the inevitable duel in the Channel surf to settle who will bring her home.

It’s a good-looking film, shot at evocative English locations, but mention must be made of the magnificent background paintings by Peter Ellenshaw that give it so much of its authentic-seeming period character. There’s not much action in it, but the escape from the Tower of London is suspenseful, and the final rapier duel between Todd and Gough is quite well done. This was the third of four Disney historical adventures shot in Britain in the early Fifties; it was a handsome picture, slick and well made, yet for some reason it was a disappointment at the box office. Disney would make one more British historical, Rob Roy, and then lay off the swashbucklers until the Zorro TV series some years later. 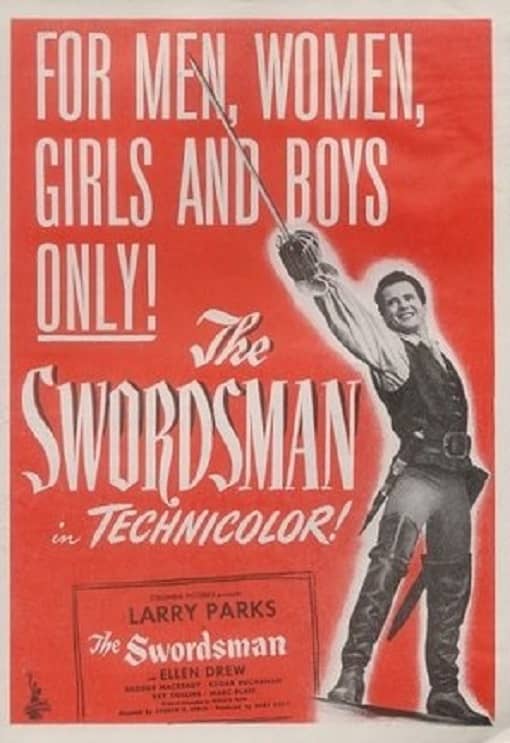 It’s late seventeenth-century Scotland, and the clans are a-feudin’. This film has two matinee-idol lookers as stars in Larry Parks and Ellen Drew, and if you guess that means we’re in for a cross-clan Romeo and Juliet-type romance, well now but you’re good guessers, lads and lassies, aren’t you so? The Glowan and MacArden clans have been stealing each other’s livestock and cutting each other’s throats for a century, but when Alexander MacArden (Parks), under an assumed name, cute-meets Barbara Glowan (Drew), bonny eyes start a-twinklin’, and young Alex vows it’s time to make peace between the families. Under his false name he attends the Glowans’ highland games, winning the javelin throw (tossing an eight-foot boar-sticker — some javelin!) and Barbara’s heart. But he’s recognized as a trespassing MacArden and the killings, both fair duels and foul murders, begin.

I’ve never quite understood Parks’ appeal, and at first glance Drew doesn’t do much besides smile and look adoringly at Parks, but I admit that they both eventually show enough depth to win me over. I have no such reservations about George Macready as Barbara’s villainous cousin Robert Glowan, who’s as much for war as Alexander is for peace. He’s nasty and smart, manipulating his younger brothers into dishonor and death, and he’s always quick to go for his basket-hilt broadsword. But Alexander, though reluctant, is a dab hand with a broadsword himself, and as you might expect from a film entitled The Swordsman, blades flash with some frequency. The swordplay is good, too, and the lead Glowans and MacArdens, Parks included, are all credible fencers.

This is a handsome production that makes good use of Technicolor. Northern California stands in for the Scottish Highlands, and it’s scenic enough for the part, especially with the addition of a few herds of sheep and some judiciously-placed matte paintings. The cast’s Scottish accents are hit or miss, but at least there are only a few golf and whisky jokes. Given this tale’s series of abductions, ambuscades, betrayals, and warnings of betrayals, there’s an awful lot of riding along the shores of the “lochs,” all conducted at a gallop — I swear, there must be a full fifteen minutes of sheer galloping in this flick. Moreover, these haughty Scots are stiff-necked and proud, which accounts for all the deadly misunderstandings in act two. But by act three everyone’s decided whether they’re for war or peace, which leaves Parks and Macready to sort things out in a fine rough-and-tumble climactic duel. Will peace and love prevail in the end? Och, aye. 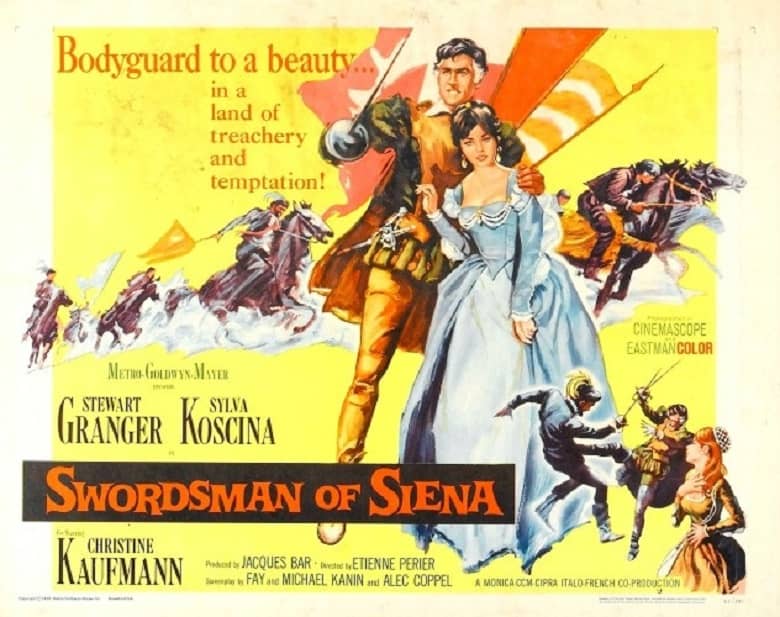 If this swashbuckler seems a trifle old-fashioned for 1962, that could be because it was stuck in development hell for a decade. But eventually it got filmed, and though star Stewart Granger might be a bit old for the lead role, he manages to pull it off regardless.

The story is set in the Tuscan city of Siena in the late 1550s during the Italian Renaissance, shortly after Siena’s long-standing republic has been overturned by the conquering Spanish, who have installed their own governor. Granger plays English mercenary Thomas Stanswood (modeled on the historical John Hawkwood), who hires out his sword arm to the rulers of Italian city-states. The opening scene establishes him as a charming but amoral rogue being pursued by his previous employer for having dallied with his duchess. After some acrobatic swashbuckling and quick-change artistry, he eludes his pursuers and arrives in Siena, home of his next employer, the hated Spanish governor. The city is seething with intrigue as the old republican nobles, who call themselves “The Ten,” plot against their new Spanish overlords.

The former leader of the nobles, Lord Arconti, got killed by the governor’s hatchet man in the city’s no-holds-barred annual horse race, leaving behind two daughters: the young and idealistic Serenella (Christine Kaufmann), and the elder Orietta (Sylva Koscina), who is seemingly resigned to having to marry the governor. Stanswood is hired as bodyguard to Orietta and is quickly caught up in a web of plots and politics, and soon finds that Orietta needs a bodyguard because she’s playing a double game.

The swordplay in this movie is simply superb, its centerpiece an extended duel in a grain mill between Stanswood and a member of The Ten that shows Granger has lost none of the skills he’d developed for Scaramouche (1952). In the first half of the movie, Stanswood — or perhaps it’s Granger — is so smug that he’s almost insufferable, but once he starts to fall for Orietta he becomes more likeable. The film is pleasant to look at, shot in and around Braciano Castle near Rome, and the colorful Renaissance costuming is particularly gorgeous. Most striking is the deadly climactic horse race, which is based on the Palio, a contest that dates back to medieval times and to this day is held twice a year in Siena; the film takes full advantage of its visual spectacle. A tidy package, all in all; add this to your watchlist.

I’ve wanted to see THE SWORD AND THE ROSE for quite a while, because I liked WHEN KNIGHTHOOD WAS IN FLOWER, and I like Glynis Johns (for two reasons: A LITTLE NIGHT MUSIC, and she and I share a birthday!)

The problem is — last I checked, it’s not available readily, and Disney never seems to be showing it.

This is exactly the kind of thing that makes we wonder….

Now that Disney has its own streaming service, will they recreate the same thing they had in the VHS market decades ago? Disney used to make the biggest hits from their back catalog (SNOW WHITE, SLEEPING BEAUTY, THE LADY AND THE TRAMP…) available for home purchase for only a limited time. If you didn’t buy it when you had the chance, you missed out on owning a copy of 101 DALMATIANS to share with your kids while they were young.

It was an incredibly effective marketing technique. Parents made a huge deal about snapping up VHS tapes for $40 while they could.

So…. now that they have Disney+, while they make parts of their vast back catalog available to stream only for a limited time??

If so, will we have traveled so far into the future that we’re right back to the 70s, when you had to watch that movie on TV Friday night because everyone was talking about it and you wouldn’t get another chance?

That’s always going to be the question with Disney and Disney+. I will say they are adding some of their catalog titles up there — one recent one being Island at the Top of the World, which I suspect won’t ENTIRELY be lacking interest in these parts; but I’m still waiting for things like Watcher in the Woods, In Search of the Castaways, Dragonslayer and, yes, a lot of these 1950s & 1960s live-action films.

Egad! An Ellsworth’s Cinema of Swords and I almost missed it???

I remember seeing the Sword and the Rose (Glynis Johns has been a favorite of mine since I saw her in the Court Jester) but I’ve never seen either the Swordsman or Swordsman of Siena. I’ll have to track them down, especially the Stewart Granger flick; after all, who can resist Sylvia Koscina AND Christine Kaufman in the same movie?