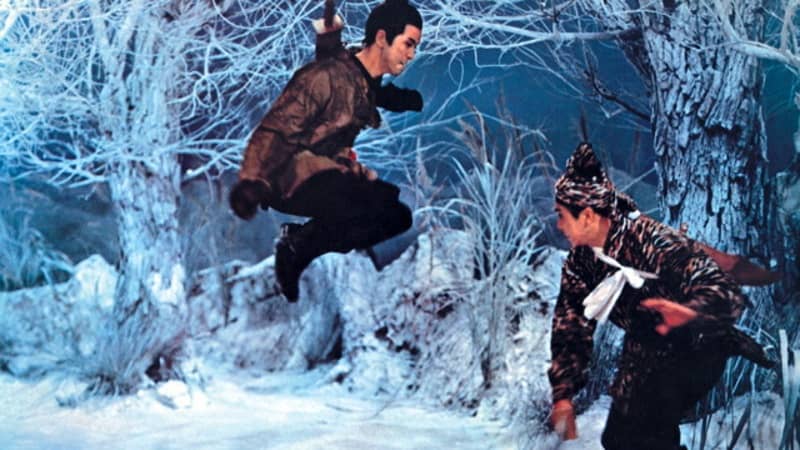 Though visionary director King Hu established the elements of the modern wuxia, or Chinese historical swordplay film, it was fellow Hong Kong director Chang Cheh who really took the ball and ran with it. He followed hard on Hu’s Come Drink with Me and Dragon Inn with his own wuxia action movies and quickly became one of Asia’s top-grossing directors, with a style that drew on Hu but also Japan’s Akira Kurosawa, America’s Sam Peckinpah, and Italy’s Sergio Leone. After about a dozen swordplay films, he turned to unarmed martial arts, helping to define the burgeoning kung fu film genre. All told, he made over ninety films for Hong Kong’s Shaw Brothers studio and was a major influence on later directors such as John Woo, Robert Rodriguez, and Zhang Yimou. Let’s take a look at his first three wuxia films, each of which builds on the stylistic advances of the previous.

King Hu reinvented the modern wuxia film in 1966 with Come Drink with Me, then left the Shaw Brothers film factory for Taiwan. But the Shaw Brothers had another top-notch action director in Chang Cheh who began his own series of historical martial arts movies with One-Armed Swordsman, which broke new ground with its dynamic and colorful swordplay and was an even bigger hit in Asia than Come Drink with Me.

Sometime in China’s past, Master Qi’s Golden Sword School is a leading training ground of martial artists, but Qi Ru (Tien Feng) has made enemies of bandits Long-Armed Devil (Yeung Chi-hing) and his son Smiling Tiger Cheng (Tang Ti). The bandits launch a surprise attack on Qi’s school, and his servant Fang throws himself in front of the attackers, dying over his broken sword to save the master. Qi honors his sacrifice by taking his son, Fang Kang (Jimmy Wang), to be one of his disciples; years pass, and Fang distinguishes himself as Qi’s best student, but the other students are jealous, including Qi’s spoiled daughter Pei (Angela Pan), who’s peeved that Fang won’t court her. The jealous students ambush Fang one winter night, and when Fang dismissively defeats Pei without using weapons, she suddenly picks up a sword and severs his right arm!

Fang staggers away and falls unconscious from a bridge into the canal boat of Xiao (Lisa Chiao Chiao), a young peasant woman who takes him home and nurses him back to health, falling in love with him as she does so. Alas, Fang is in despair because martial arts was his life, but now he’s crippled — he can’t properly wield Qi’s heavy golden sword left-handed. Fortunately, Xiao has an ancient book of kung fu that had belonged to her father that includes methods for wielding a shorter blade in the left hand — perfect for use with his father’s broken sword!

Xiao hates martial arts, though, blaming the pursuit for her father’s death, and extracts a promise from Fang that he’ll give it up. But then Long-Armed Devil and Smiling Tiger reappear with a new weapon, the sword-lock, that enables them to beat Master Qi’s Golden Sword style, and they begin ambushing and killing Qi’s students. Fang’s new left-handed short sword style enables him to defeat the sword-lock; can he keep his promise to Xiao when his adoptive family is threatened?

You know he can’t. The swordplay in the final act is sensational and relentless, often shot with a handheld camera, unusual for the time. Director Cheh takes King Hu’s method of quick cuts and improves upon it, driving the action while keeping events crystal clear. Long-Armed Devil has more tricks up his sleeve than the sword-lock, and Fang performs amazing martial feats but always with effort, as if barely pulling them off. The villains are menacing and despicable, the lead actors are appealing, and their victories feel both well-earned and satisfying. Scores of Hong Kong action films will come after, all doing their best to follow the example of Chang Cheh’s One-Armed Swordsman.

Golden Swallow (or The Girl with the Thunderbolt Kick)

After director Chang Cheh’s success with One-Armed Swordsman, Hong Kong’s Shaw Brothers selected him to direct this sequel to the seminal Come Drink with Me, once again starring Cheng Pei-pei as female wuxia hero Golden Swallow, though this film gives her a backstory that has no connection to the previous movie. In the opening combat, coyly viewed by a nameless observer through gaps in wooden shutters, Golden Swallow fights off vengeance-bound bandits, is poisoned, and then saved by the intervention of swordsman Golden Whip (Lo Lieh), who forces the bandits to give him the antidote.

Whip takes Swallow off to his secluded mountain cottage to recover. There they are visited by Whip’s friend Flying Fox who tells them of the exploits of a white-clad swordsman called Silver Roc (Jimmy Wang of One-Armed Swordsman) who has been making a name for himself as a fighter, though he only kills bad folks who have it coming. Swallow tells Whip that sounds like her childhood friend Little Roc (yep, sorry), whom she hasn’t seen for years. Whip, who is falling for Swallow, can tell that Swallow still has feelings for Roc. Angst!

And there’s the plot: the whole thing is a puerile high-school love triangle. To attract Swallow’s attention and get her to come to him, the arrogant Silver Roc goes around attacking various bandit groups and leaving Golden Swallow’s signature yellow darts behind to implicate her, so that when they all go after Swallow for revenge, she’ll have to turn to him for aid. Nice valentine, Silver Roc. But really, this is Silver Roc’s film, perhaps because Chang Cheh has little interest in female characters. Roc is meant to be hot: in addition to being a human killing machine, he’s also a poet and calligrapher, a melancholy romantic hero whose thwarted love for Golden Swallow drives him to slaughter bandits and hang out in brothels. Right.

Okay, but how’s the action? Quite good, actually. I lost count of how many sword fights there are, but Cheh keeps them interesting by interjecting hand-held camera and in some cases shooting from directly above, which gives the swirling combats a flavor of old Busby Berkeley musicals. Cheng Pei-pei holds up her end well, but the male characters get most of the screen time, alas. While the mass mêlées can be chaotic, the one-on-one combats are shot for clarity of action; the inevitable duel of romantic rivalry between Silver Roc and Golden Whip is particularly excellent. There’s a lot of unconvincing fake gore that was much more shocking in 1968 than it is now, but ignore that and enjoy the leaping fights staged in colorful locations such as ancient tombs and the headquarters of the Golden Dragon bandit gang, fully equipped with handy and convenient torture implements. Lurid! 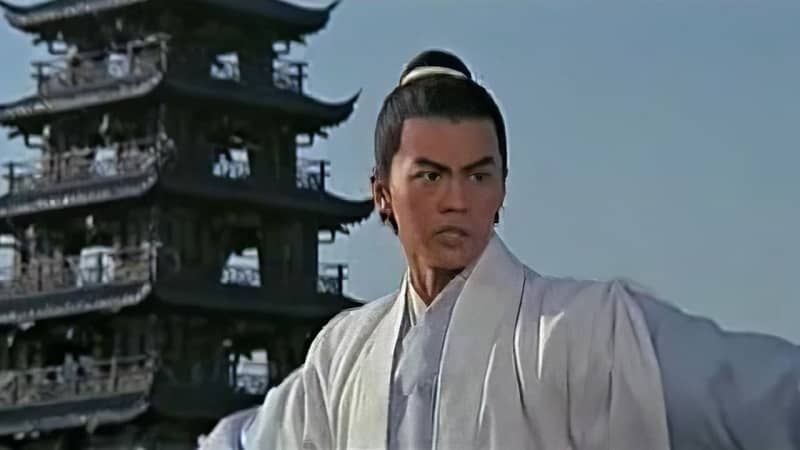 Have Sword Will Travel

King Hu’s innovation in Come Drink with Me was to portray sword fighting not as a martial art but as choreographed dance inspired by Chinese opera. In his third film, Chang Cheh takes this two steps farther, imbuing the entire production — costumes, sets, and lighting — with the theatricality of Chinese opera. The result is a colorful fairy tale told with subtle glances and stylized violence.

On a sunny day in a flowering meadow, kute kung fu kouple Piau Piau (Lee Ching) and Brother Siang (Ti Lun) are teasing each other about their upcoming wedding when they are stumbled upon by bandits of the Flying Tiger gang. After driving the bandits off, the kouple follow them to their lair in a pagoda tower and decide they’re up to no good. However, before they can return to Invincible Village to report to Siang’s Uncle In, the kouple encounter a mysterious young stranger with impressive sword skills — though he won’t tell them his name, which makes them suspicious.

Meanwhile, Lord In (Cheng Miu) has got trouble. Every year the government engages In and his martial artists to protect their annual silver shipment to the capital, but this year Lord In is so sick he can’t even hold up his signature cleaver sword. He’s sent for Piau Piau’s mother, a famous sword teacher, to lead the escort in his place, but she can’t come, so Piau Piau and Brother Siang volunteer to do it. Then the mysterious stranger (David Chiang) appears at Lord In’s door, out of money and looking for food and lodging. His name is Lo (for lone, and lonely), and when he and Piau Piau start making eyes at each other, Siang draws his sword and accuses Lo of working with the Flying Tigers. In a brief exchange, Lo demonstrates that his skills are superior to Siang’s, but then Ghost Shadow, an actual Flying Tiger spy, is spotted at the window, there’s a confused mêlée, and both Lo and Ghost Shadow disappear into the night.

As in Cheh’s Golden Swallow, we’re in high school romance territory here, but the story is much better told this time around. Misunderstandings occur and are sorted out, there are lingering looks and flashing blades, and Brother Siang grows ever more jealous. Piau Piau reveals Lord In’s infirmity to Lo and he decides he must join the kouple to help escort the silver, much to Siang’s displeasure. But it’s a good thing he does, because the silver shipment has to go right past the Flying Tigers’ pagoda tower and right into the bandits’ elaborate ambush.

This pagoda tower is a brilliant setting for a running wuxia combat, eight floors of balconies, wooden platforms, and stairways, a perfect video game level design decades before such a thing existed. It’s the stage for the story’s final bloody ballet of jealousy and sacrifice, every shot perfectly composed as Siang and Lo defeat the Flying Tiger mini-bosses one by one, growing ever more wounded in the process. After the big boss is finally thrown from the highest balcony, the bleeding rivals stagger down to be reunited with (the also wounded) Piau Piau, and the romance concludes in the way that it must. So fine.

Another Ellsworth’s Cinema of Swords? At last!

While I have seen Zatoichi vs. The One-Armed Swordsman, I don’t believe I have seen any of these three films in their entirety. Many thanks for the recommendation, though I hope your “k” key withers and fades, Accursed Alliterator!