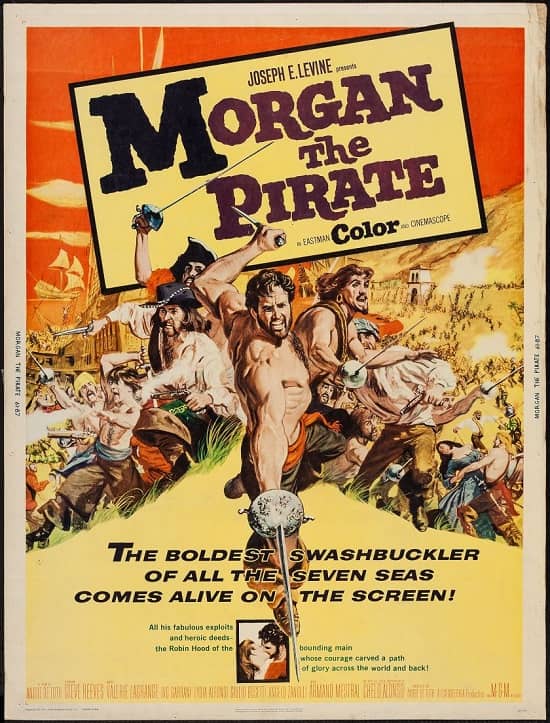 We tend to think of pirate tales as mainly an English language thing, since the first early modern histories of pirates were in English, as were the genre-defining stories of Robert Louis Stevenson (Treasure Island, Kidnapped), Rafael Sabatini (The Sea Hawk, Captain Blood) and Howard Pyle. But pirate stories were extremely popular in Continental Europe as well, especially in Italy, where Emilio Salgari (1862-1911) wrote as many as 200 adventure novels, mostly about pirates or colonial adventurers who might as well have been called such. His most famous novel is The Black Corsair (1898), which has been filmed at least five times.

During the period of 1960 through 1965, the Italian film industry was famously focused on making peplum, or sword-and-sandal films, but they also dabbled in other historical adventure genres — and in the case of pirate movies, more than dabbled. At lot of these are quickies that might not be worth your time, but Italy loves a good keelhaulin’ cutthroat, and some of the Italian pirate films of the early Sixties were standouts.

This is a fine Franco-Italian production, one of the best Continental pirate movies, starring Steve Reeves as Henry Morgan and Valérie Lagrange as Doña Inez, his daughter-of-the-Spanish-governor love interest. Its taut direction is primarily credited to the Hungarian-American director André DeToth, who (you can’t make this up) later in life lost one eye and wore a black eyepatch. But seriously, Morgan’s production values are good, it has topnotch cinematography by Tonino Delli Colli, excellent costumes and locations, and a rolling nautical score by Franco Mannino.

But it does throw history to the winds. The story begins in the Spanish colonial port of Panama, where captive Englishman Henry Morgan is kicking up a fuss in the slave market. In a scene reminiscent of Captain Blood (1935), the governor’s daughter, Doña Inez, buys Morgan for her household and assigns him to handle her horses—but when he steals a kiss in the stables, he’s arrested and condemned to work as a slave hand on a Spanish galleon. Predictably, Morgan leads an uprising, takes over the galleon, and is acclaimed its captain. He sails with his new crew to Tortuga and a tense relationship with its brutal commodore, François l’Olonnais (Armand Mestral), who has incidentally captured Doña Inez. Morgan demands supplies, clothing, and Inez from l’Olonnais, and fights a fine rapier duel with him to win them—but then finds he’s been given only women’s clothing, ha ha ha. So Morgan clothes his crew in dresses to deceive a Spanish treasure ship, his men conduct a boarding action in drag, and he returns to Tortuga wealthy and in triumph.

And we’re not even halfway through the picture! Still ahead are Morgan’s frustrated romance with Inez, an alliance with England, a failed attack on Panama, a bold James Bond-ish trespass on a Spanish victory ball, Morgan burning his own pirates’ ships so they can’t retreat, and his final revenge on the Spanish as he leads his pirate army overland to take Panama from the landward side. The resulting sack of Panama is one of the best piratical twenty minutes on film.

About the only thing that keeps this film from being an utter classic is the flat performances of the leads, who just don’t seem to be into it. Reeves is handsome and charismatic as always, but unlike the magnificent Laird Cregar in The Black Swan (1942), Reeves’s Henry Morgan has no sense of humor—and even worse, no chemistry with costar Valérie Lagrange, who is beautiful but bland. But lawdy mama, the locations, shot off the Neapolitan coast on the Italian island of Procida, are simply fabulous, with Tortuga a rollicking town of shanties and limestone caves filled with Caribbean loot and, after dark, the best buccaneer beachfront revels ever. Blow me down! I’m ready to sign the Articles. Aficionados of pirate films have got to see this one. 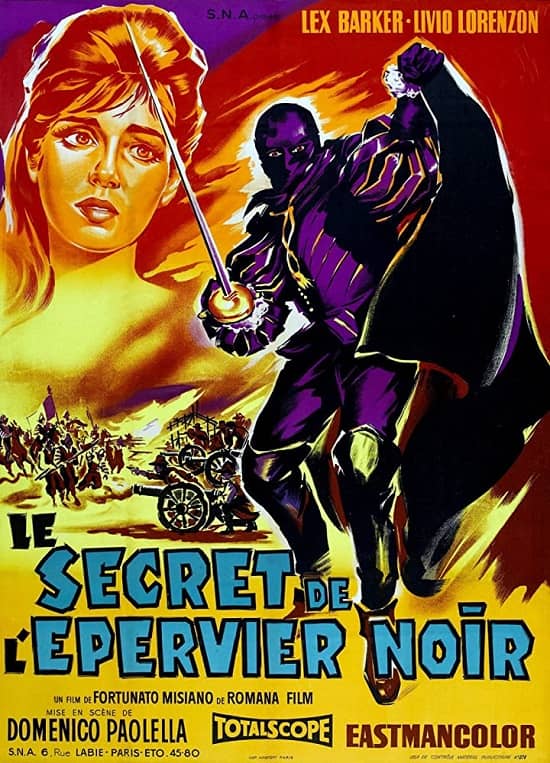 The Secret of the Black Falcon

This Italian pirate adventure is a throwback to the Saturday matinee movies of the early Fifties, so it’s appropriate that its lead is Lex Barker, another former Hollywood Tarzan gone to Europe to prolong his cinematic career. The story is a series of pirate movie clichés strung like the pearls on a captive Spanish señorita’s necklace. It’s the Caribbean in the Age of Piracy: the costumes, accurate but cheap-looking, say it’s 1625, the presence of Calico Jack Rackham says it’s closer to 1700, but the setting in the made-up Spanish colony of “Melida” means it’s really in the realm of pure fiction. A document that’s very, very (very) important to both the Spanish and the English was on a ship that’s been captured by pirates, so the noble Captain Herrera of Spain (Barker) gets pretend-cashiered to go undercover, join the buccaneers, and recover it. His aide and guide, the roguish Sergeant Rodriguez, is drolly played by the bald and mustachioed Livio Lorenzon; you’ll recognize him, as he was in nearly every Italian peplum and historical adventure of the early Sixties as a hero or villain, and here he gets to play both, with a comic turn into the bargain. Lorenzon has a good old time with this piratical folderol and is the main reason to watch it. Barker, though? He’s just earning a paycheck on his good looks and can’t be bothered to work hard beyond that. But at least he can fence (more or less).

The only other person really enjoying himself here is Walter Barnes (Rolf the Viking in Captain Sindbad), appearing in the role of Calico Jack and chewing the scenery at every opportunity. Jack, of course, is the pirate who’s captured the Very Important Document, and Herrera and Rodriguez must persuade him to let them join his crew so they can find it. Dumb jokes ensue as the pair go in and out of favor with Rackham while searching for The Document, but then Calico Jack captures a Spanish ship simply chock-full of highborn Spanish ladies, including Herrera’s ladylove Leonora (Nadia Marlowa), and things get serious (more or less).

But what about the eponymous Black Falcon? He’s another pirate captain who’s also after The Document, and he shows up a time or two in his cool all-black outfit including cloak and hood, but then gets forgotten about for an hour until he finally reappears to bedevil Herrera, Jack, and even Leonora. Who can he be under that mysterious black cowl? Well, he isn’t Herrera or Jack, so he must be…. 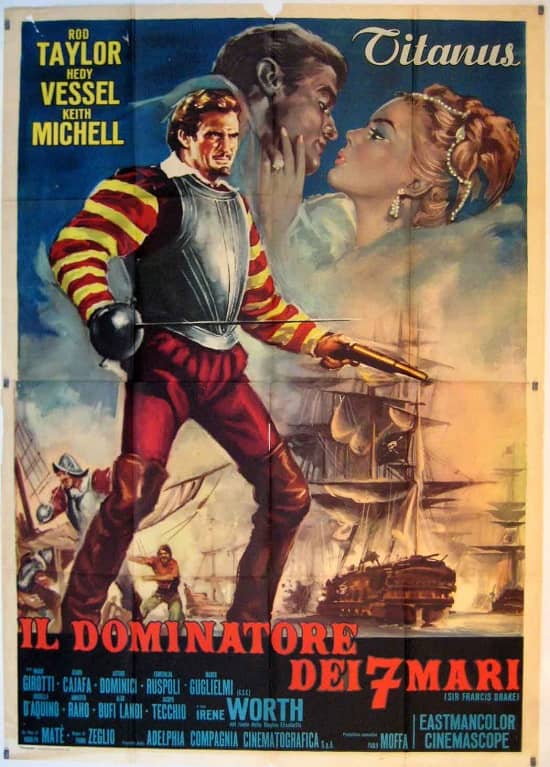 This movie really wants to be The Sea Hawk (1940), and it gets closer to the mark than you might expect for an Italian swashbuckler made during the height of the peplum craze. It’s a fictional biography of the life and adventures of Francis Drake, compressing and simplifying to fit it into 100 minutes, the story hinging on the relationship between Drake the privateer and Elizabeth I the queen. Drake is played by Rod Taylor, who does everything he can to evoke Errol Flynn, and by and large the effort pays off. Elizabeth is portrayed by the Shakespearean stage actress Irene Worth, and while she’s no Flora Robson, she comes close. British actors fill most of the other speaking roles, so at least they get the accents right.

The film opens on a running sword fight through the back alleys of the port of Plymouth and goes on from there all the way to the defeat of the Spanish Armada, the action ably overseen by veteran director Rudolph Maté, who never lets the pace flag. There’s a lot going on here, as the ambitious story attempts to include the highlights of Drake’s long and eventful career, including forestalling a mutiny off Argentina, the epic journey around the tip of South America into the then-Spanish Eastern Pacific, Drake’s taking of Spanish treasure ships, his claiming of the coast of California as New Albion, and his return to England with treasure equal to twice the nation’s annual budget. Without that treasure Elizabeth would have had to give in to Spain’s threats and sign a treaty amounting to a surrender of sovereignty, a plot point supported by involving Drake in bonus fictional events such as foiling a Spanish scheme to assassinate the queen, preventing the escape of Mary, Queen of Scots, and looting a Chilean gold mine that’s decked out like something from a lurid 1930s pulp adventure. History is compressed so all this happens in two years instead of ten, but who’s counting? Bear away and prepare to fire broadside!

One caveat: a bit over halfway through there’s a “comical” sequence involving the Miwok tribe that’s incredibly insulting to Native Americans; it’s hard to see how it could have been considered funny even in 1962. Just … skip past it. It’s super cringey.

I love your series. Épervier translates as hawk. In french, falcon is faucon.

Quite right! But I go by the name a movie was given for its English-language release.

Another Cinema of Swords??? Oh, thank the Lord, I was so hard into withdrawals that I was actually thinking of watching the newest version of the Three Musketeers again. (shiver)

I think that I’ve seen parts of Morgan, the Pirate before, but the other two movies are completely new to me. I’ll have to take a look at them.