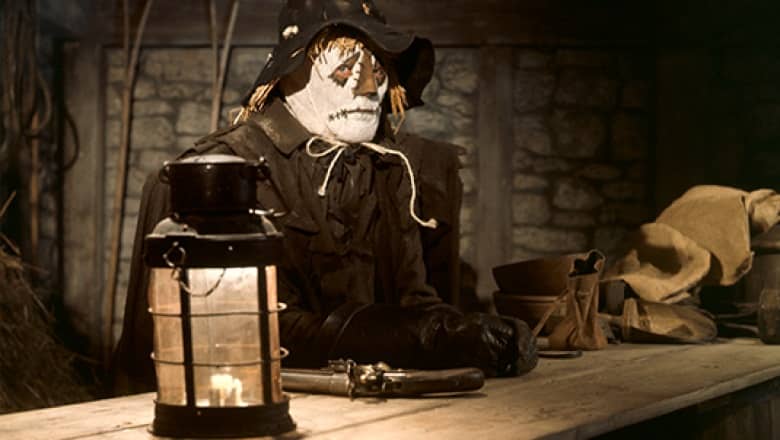 1963: Lerner and Loewe’s Broadway musical Camelot finally closed after almost 900 performances, Disney’s The Sword and the Stone was preparing for release at the end of the year, and President John F. Kennedy’s administration was being compared to King Arthur’s. This didn’t go unnoticed in Arthur’s Great Britain, and the British movie industry obliged with two Camelot movies, one of them quite ambitious, that have now been largely forgotten. Indeed, Olde England was still the favorite screen setting for historical adventure, as Walt Disney, looking for a follow-up to Zorro, was well aware. And so Disney’s last great swashbuckler, The Scarecrow of Romney Marsh, was shot on location on England’s south coast, one classic that hasn’t been forgotten.

Sword of Lancelot (or Lancelot and Guinevere)

This is a worthy attempt to film the tragedy of the doomed love triangle of Arthur, Guinevere, and Lancelot, and if it falls short of greatness, it isn’t because writer, director, and star Cornel Wilde didn’t give it his all, it’s just that he wasn’t David Lean or Sergei Eisenstein.

Cornel Wilde was an Olympic fencer who became an action movie star during the studio era, but he didn’t like being typecast and he wanted to control his own career, so in the mid-Fifties he formed his own production company with his wife Jean Wallace and began making independent films, appearing in dramatic roles as often as fighting heroes. Camelot was a popular subject when Kennedy was in the White House and there was a brief boom of Arthurian pictures, of which this was one of the best. 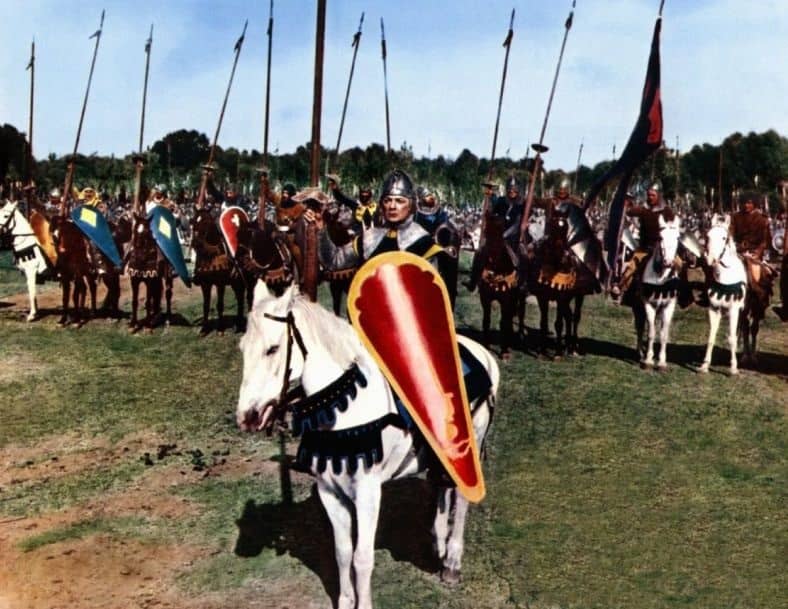 The story has all the classic elements of Thomas Malory’s Le Morte d’Arthur, with King Arthur (Brian Aherne) deciding to marry Princess Guinevere (Wilde’s wife Jean Wallace), his finest knight Sir Lancelot (Cornel Wilde) becoming Guinevere’s champion and secret lover, and Arthur’s son Modred (Michael Meacham) plotting to bring Camelot down by revealing the treasonous love between Arthur’s wife and his closest friend. The movie has a bit of a split personality, oscillating between the drama of its tragic love story and Lancelot’s deeds of knightly valor, which include fighting in a tournament, a skirmish, an ambush, and two pitched battles. The love story is daring for its day, with a scene of lingering and sensuous adultery; Wilde’s Lancelot, who was French, after all, speaks with a pronounced French accent, unusual in movie depictions of the character but sensible if you want to portray him as an illicit lover.

The combat is also pretty daring for 1963, with an attempt to depict medieval combat as realistically as was possible at the time, such as when Lancelot wins his first tournament by splitting his opponent’s skull with a greatsword. The battles are likewise valiant attempts to portray medieval warfare clearly and convincingly, with Lancelot leading his knights and men-at-arms first against a warband of invading Saxons and finally against Modred and his rebel army. In both battles the English longbow tactics of a later era figure prominently, and director Wilde does a good job of giving the audience a clear idea of what’s going on as the various units wheel and charge. It all ends in tragic death and pious renunciation, but that’s true to the source material, which is more than you can say for most Arthurian movies. Kudos for that. 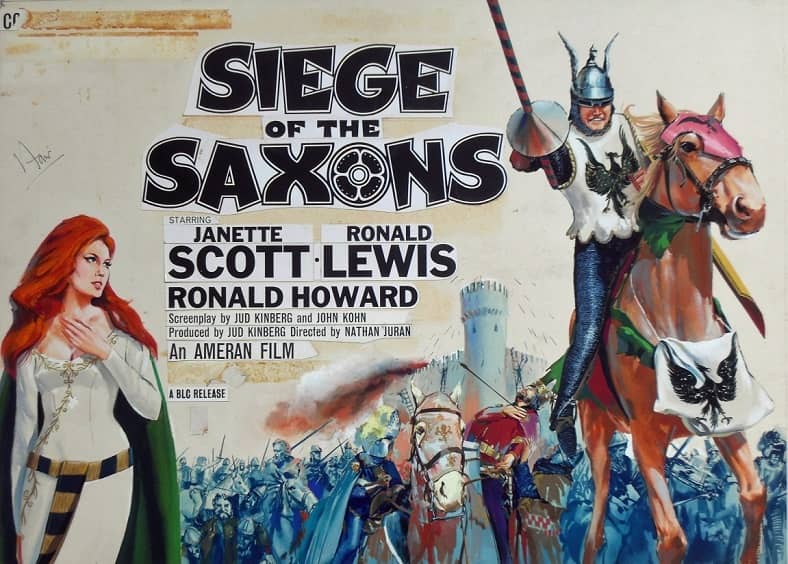 Siege of the Saxons

This is another Arthurian adventure from the Year of Camelot, but there’s nothing particularly Arthurian about the title Siege of the Saxons, which probably contributes to why it was overlooked and is now nearly forgotten.

In the Fifties and Sixties, movies were often packaged and sold to distributors as double features, with a lead marquee title and a lesser opening film. This picture was the opening feature to Jason and the Argonauts, both made by the same producer, Charles H. Schneer, and directed by Nathan Juran of The 7th Voyage of Sinbad. Saxons was shot in fifteen days by Juran with a small cast and recycled costumes, sets, and footage from The Black Knight and Sword of Lancelot. It’s a curious sort of Arthurian film: King Arthur (Mark Dignam) has no round table, his wicked son Mordred has been replaced by a loyal daughter named Katherine (Janette Scott), and his only knight champion is Edmund of Cornwall (Ronald Howard), who turns out to be a rotter. Edmund is plotting with the invading Saxons to kill Arthur, forcibly marry Katherine, and seize the throne, and he’d have gotten away with it, too, if it wasn’t for a meddling outlaw from the greenwood named Robert (Ronald Lewis). Yep, there’s at least as much Robin Hood in this movie as King Arthur, despite the eventual appearance of an aging and unmagical Merlin (John Laurie).

The story isn’t much, the leads are likeable but unmemorable, and the combat is mostly weak sauce until the final battle between the Saxons and the English knights, where director Juran shows what he can do despite his tiny budget. This is for Arthurian fans only, and even they could be forgiven for giving it a pass. 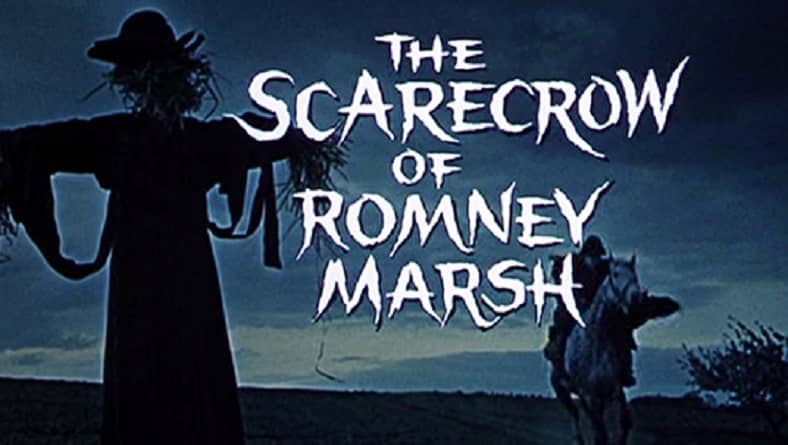 English novelist Russell Thorndike created outlaw hero the Scarecrow and wrote seven books about him from 1915 through 1944; there were three screen versions of the story, but the best known is this Disney adaptation, starring Patrick McGoohan in between his runs as the spy Drake in TV’s Secret Agent. Disney was on the lookout for a swashbuckling follow-up to Zorro and found it in this tale of another disguised hero with a secret identity who fights against oppression — at least that’s the positive spin they put on the Scarecrow, a smuggler boss who rules through terror and deceit, while wearing a scary mask and howling a horrifying laugh. But he’s on the side of the rebellious Americans against the villainous King George III and his redcoats, so it’s all fine and family-friendly.

As the Scarecrow, the Vicar of Dymchurch (McGoohan) runs a secret smuggling operation that evades the revenue imposts and enables the local farmers to pay off their oppressive debt burdens. But the crown demands its import fees and sends the ruthless General Pugh (Geoffrey Keen) and a brigade of redcoats to burn farms and press-gang the locals into the Navy until somebody betrays and turns in the Scarecrow and his masked accomplices, Hellspite and Curlew. It’s a tale of conflicting loyalties and quick reverses; at first Pugh has an ally in the local Justice of the Peace, Squire Banks (Michael Hordern, excellent as always), but Pugh’s brutality alienates Banks and his aide, Lt. Brackenbury (who wants to marry Banks’s daughter), and they switch to side with the smugglers. Pugh’s plans to turn the Scarecrow’s own men against him come to naught, and though some are captured, in the guise of a press gang, the Scarecrow and his men manages to free his allies from Dover Castle and send them off to America with the smugglers.

This was produced as both a three-part miniseries for Disney’s World of Color TV show and as a feature film for overseas release. It opened with a catchy tune reminiscent of the Zorro theme but punctuated by McGoohan’s eerie laugh, which was so alarming it was edited out on rerelease. McGoohan, ominous and intimidating even as the mild-mannered vicar, was born for the role, and the direction by James Neilson, who’d worked on Zorro, was taut and suspenseful, especially during the dramatic escape from the dungeon of Dover Castle. The show was shot on location in Romney Marsh on England’s south coast, and the authentic sites added considerably to the authentic ambience. If it wasn’t popular enough to warrant a sequel, it may be because the grim tone of the Scarecrow and his gang was just too dark for Disney’s early-Sixties audience. (It could also be because the first Scarecrow episode debuted on the Disney show opposite the first appearance of the Beatles on Ed Sullivan. Curse the fates!)

I saw this on TV as an eight-year-old and was enthralled; I never forgot that laugh, and I think McGoohan’s Scarecrow led to my life-long preference for heroes who are a bit on the dark side. It was with some trepidation that I watched it again for the first time in over fifty years, and I was greatly relieved to find that it still holds up. Find it if you can.

I, too, had a strong response to The Scarecrow of Romney Marsh, but being way young when it was aired, had it only as a vague recollection, falling into the “Did I really see something like this?” memory category, until Mr. McGoohan’s obituaries made mention. And it is understandable, as it was overshadowed by Mr. McGoohan’s other Disney work in 1963 … The Three Lives of Thomasina, about a magical cat. That one, I have remembered all along the years.

Just like Eugene and Lawrence, I vividly remember watching The Scarecrow on TV as a child. I caught it again several years ago and found it just as exciting at 60 years of age as it was at 6.
Cornel Wilde was an excellent fencer, a one time student of the great Italian fencer, Aldo Nadi. He also produced and starred in a movie that still gives me nightmares, The Naked Prey.

Loved The Scarecrow of Romney Marsh. The theme song always stirred my blood, making me imagine all sorts of adventure and danger.

For some reason, I don’t remember seeing Sword of Lancelot at all but I do remember seeing Siege of the Saxons more than once in my youth (Janette Scott broke my heart). The Scarecrow of Romney Marsh was one of my favorite Disney films ever and as the other commenters say, it still holds up today.

I’ll have to look that Cornel Wilde movie up. Thanks for the tip, Mr. Ellsworth.

I have a vague recollection of The Scarecrow of Romney Marsh. It’s the skeletal costumes of the Hammer Film Night Creatures that have stuck with me all these years.

That movie had Peter Cushing and a young Oliver Reed in it. I’ll have to find that one too.

This was a great little series, I too, was a child when it came on the tv. I was thrilled because the locations were familiar to me as we often had family trips to the Romney Marches, especially the “Smugglers Inn” at Dymchurch. Thank you stirring up my childhood memory.