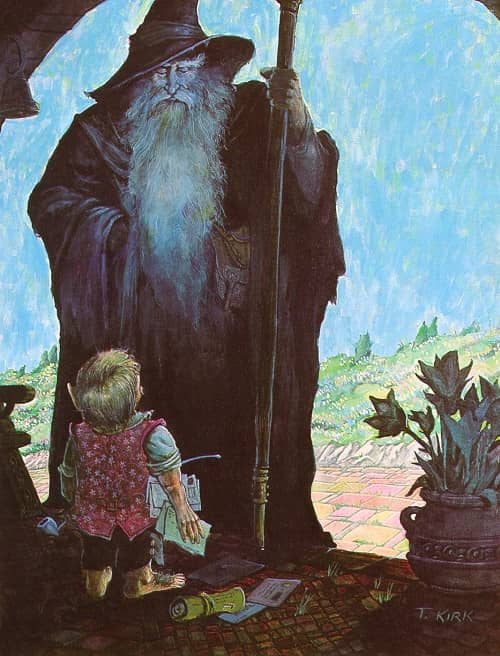 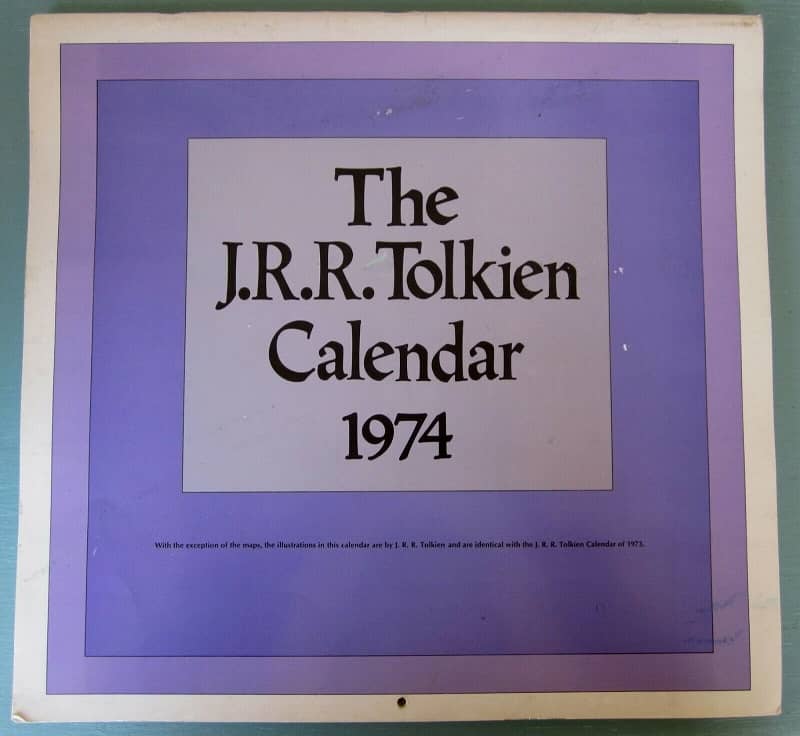 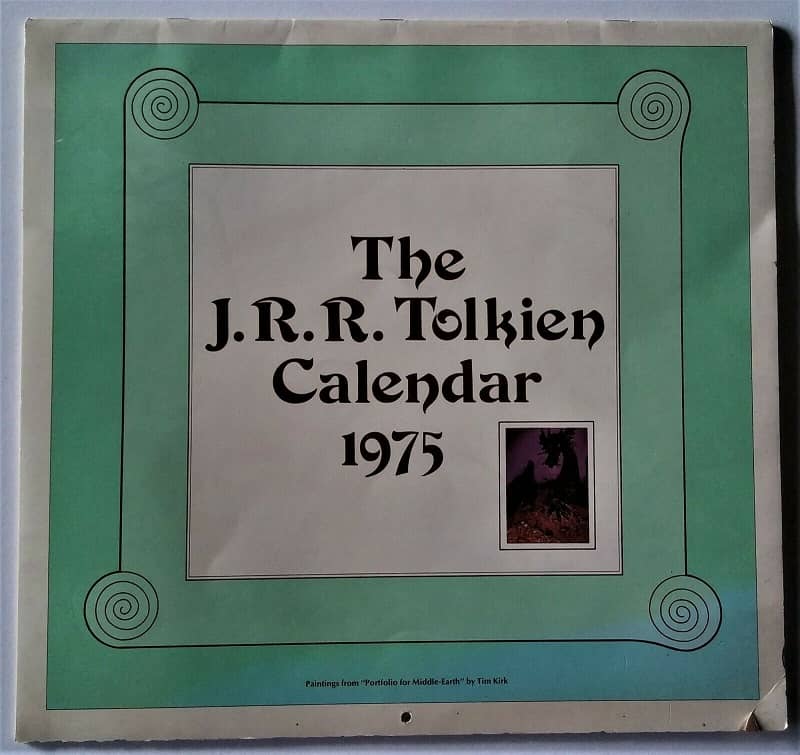 The plain, indeed austere, covers of the first three calendars tell you how early in the game it was. I’m especially charmed by the shy, almost hesitant statement on the back of the 1975 one: “We hope to find other artists who are inspired to do their own conceptions of Middle-earth so that we shall be able to offer Calendars for future years.” That note of commercial uncertainty comes from a distant world, almost as far away as Bree or Buckland, a place where the possibility of freedom from being sold something twenty-four hours a day still existed. 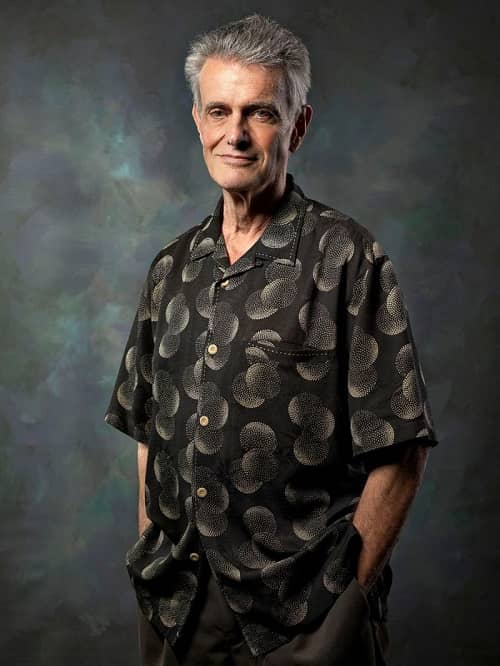 They needn’t have worried; the marketing nexus sometimes known as Mordor would conquer all, and very quickly. The 1976, 77 and 78 calendars featured illustrations by the Brothers Hildebrandt, which I liked too, though not quite as much as Kirk’s; it always seemed to me that the Hildebrandts were auditioning for an anticipated Disney animated movie that thankfully never came about. The calendars have continued to the present day and have showcased the work of some of fantasy’s top artists, including Darrell Sweet (1982), Ted Naismith (1988), Michael Kaluta (1994), John Howe (1995), and Alan Lee (2019). 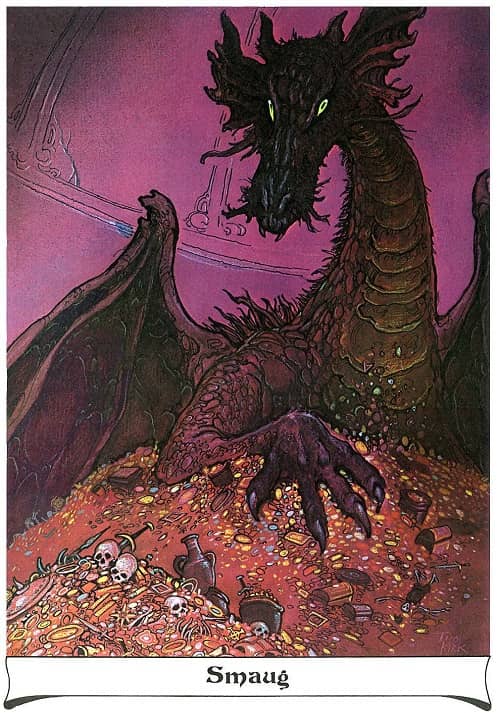 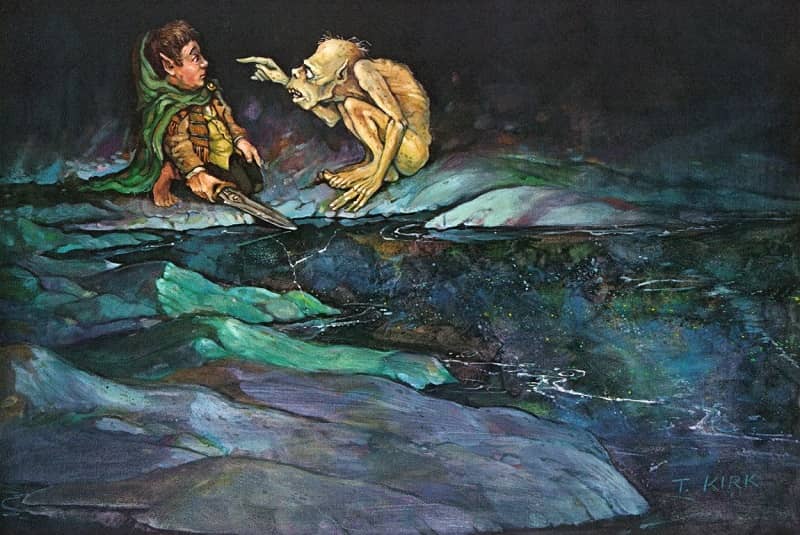 The 1975 calendar didn’t begin as a commercial enterprise but as an academic one; Tim Kirk earned a degree in illustration, and for his Master’s thesis he painted a number of scenes from The Hobbit and The Lord of the Rings, many of which were eventually used for the 1975 calendar. Kirk was a well-known presence in the world of fantastic literature even then; in the early and mid-70’s he won five Hugo Awards for Best Fan Artist, and anyone who bought DAW fantasy paperbacks in those years saw plenty of his work, especially in Lin Carter books and in the countless Kregen Burroughs pastiches that Alan Burt Akers (Kenneth Bulmer) wrote. 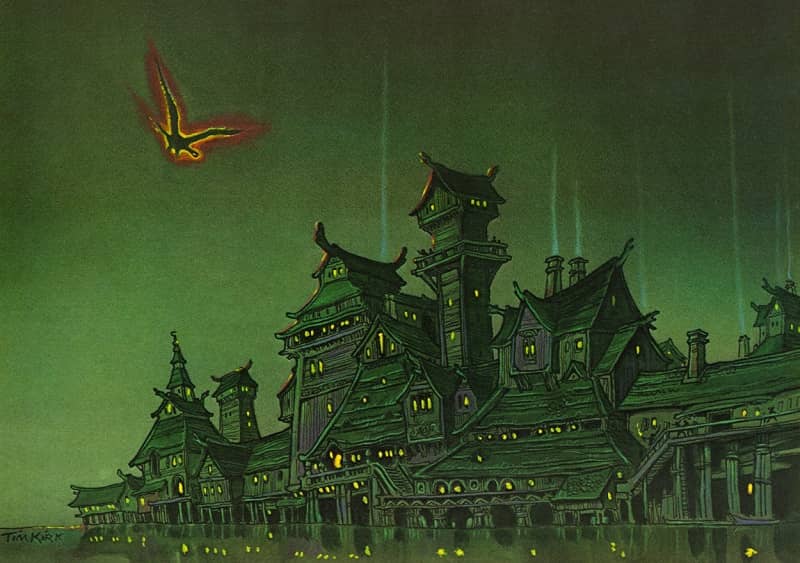 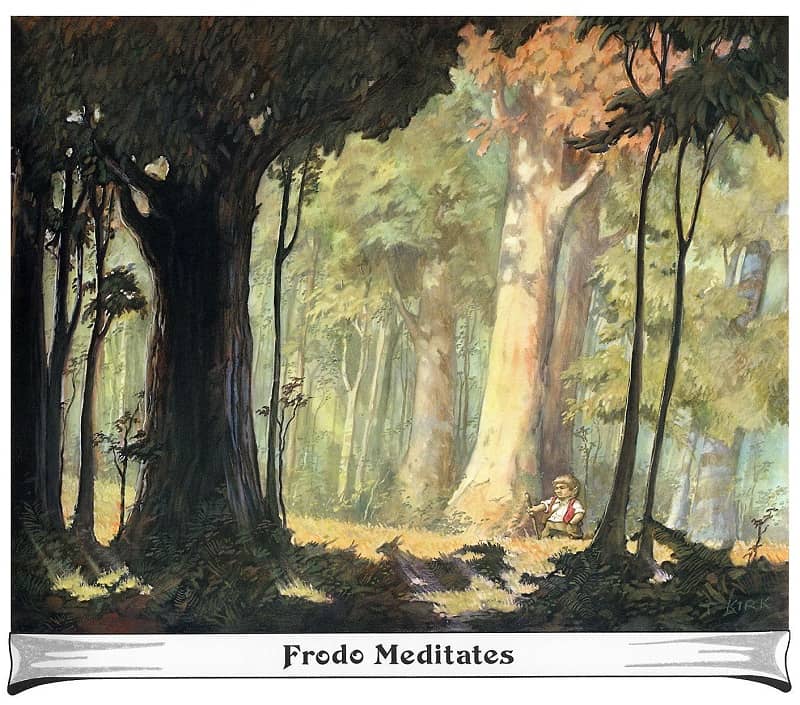 I first saw the thirteen pictures from Kirk’s calendar (the thirteenth is a double size centerfold painting of Bilbo and Gandalf) when it came out in 1975, displayed on the walls of a math classroom at my high school. I didn’t even have a class in Room 57, but the teacher opened it up at lunch and snack times and after school as a place for oddballs – wargamers, political junkies, theater arts people, science fiction and fantasy readers – to congregate. (One day he saw me reading a Doc Savage paperback and told me that I shouldn’t be wasting my time on that stuff; I should be reading Conan. Thanks, Mr. Prime!) 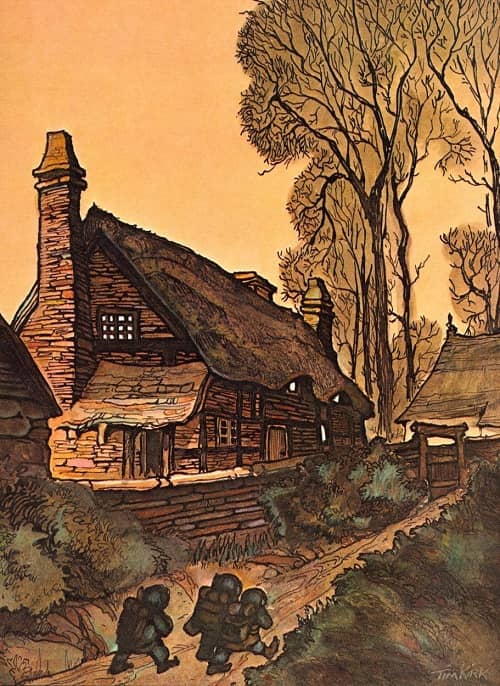 I was instantly captivated by Kirk’s paintings. My favorite then and now is “Smaug.” That smoldering, violet-tinged rendering of the fathomlessly evil, endlessly devious, insatiably avaricious dragon became definitive for me, as have many of the calendar’s other images. 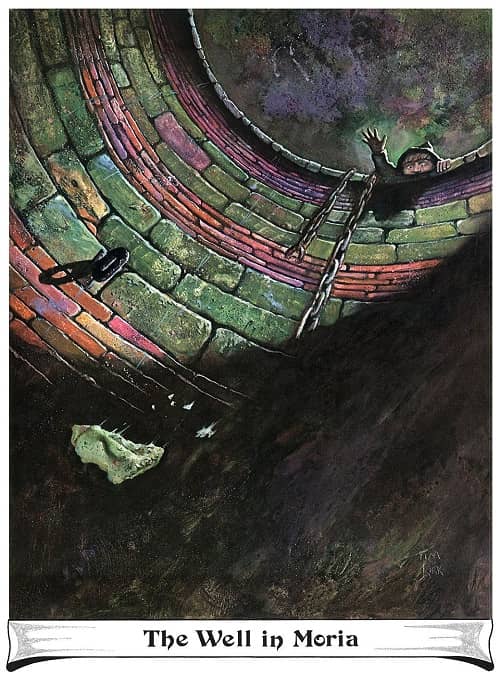 June — The Well in Moria

I think it’s significant that none of Kirk’s pictures are, strictly speaking, action scenes, with the exception of “Fire and Water,” and even that painting depicts the instant before Smaug descends on Lake-Town, and “The Road to Minas Tirith” and “Two Orcs” show Sauron’s minions doing nothing more than marching. Kirk seemed most interested in Middle-earth as a place in its own right, not just as a venue for sieges or swordplay (and I think that’s how Tolkien himself felt about it). Maybe that’s why these pictures kindled a deep desire in me to see and know this place myself. 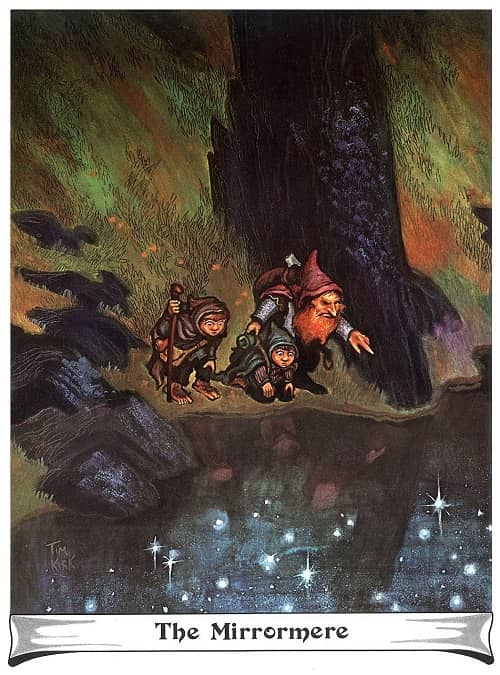 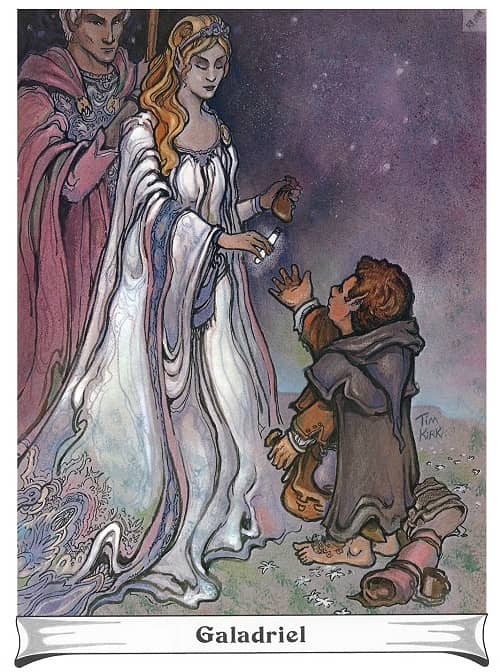 There are as many Middle-earths as there are readers; Tolkien’s great work touches all of us in a different, individual place, and yet we all feel familiar enough with it to share a common love and a communicable understanding. As for visualizations, I suppose that Tolkien’s own lovely illustrations are the only “authoritative” ones; I also think that doesn’t much matter. 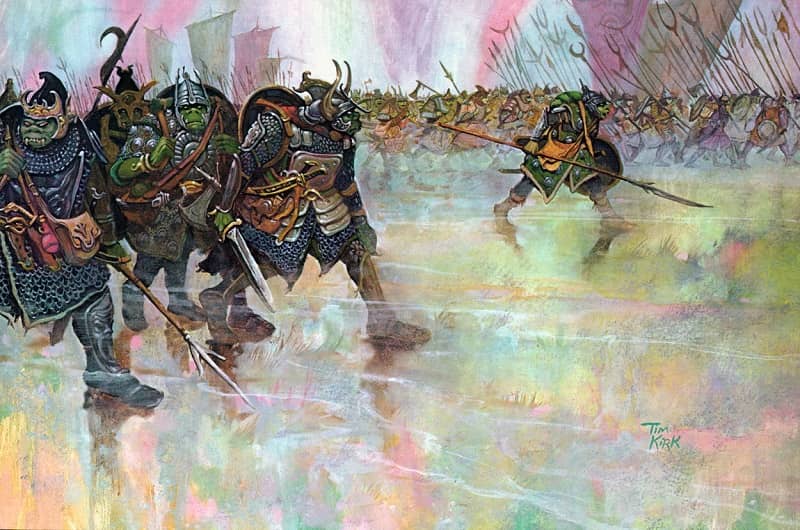 September — The Road to Minas Tirith 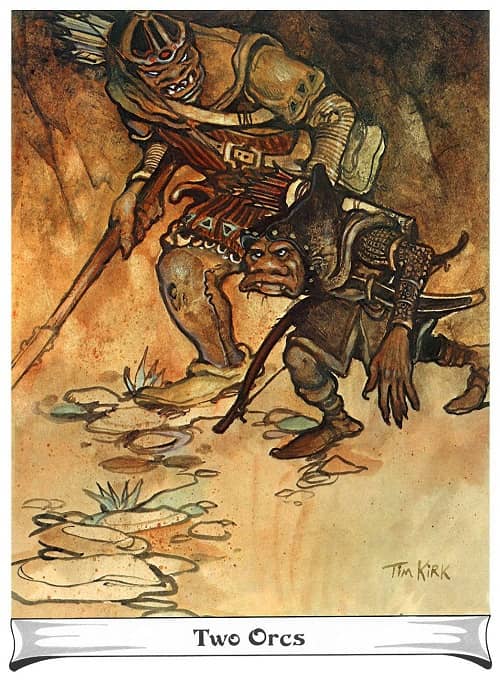 These days, Alan Lee’s bleached images are probably the default picture of Middle-earth for most people, through his book illustrations and especially through his work on the Peter Jackson films, and that’s fine. His stark landscapes have great integrity; they make visible the place in Alan Lee that Tolkien’s world has touched, and are probably especially resonant for those who first encounter Middle-earth through them. 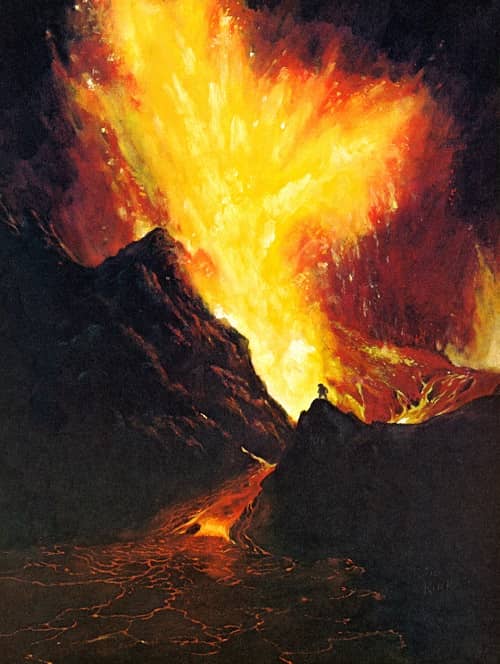 November — The Cracks of Doom

For me, though, the Middle-earth that I carry in my heart will always have the soft contours and gentle colors that Tim Kirk put on his Master’s thesis canvasses. I don’t know what grade his judges gave him, but he certainly gets an A from me. 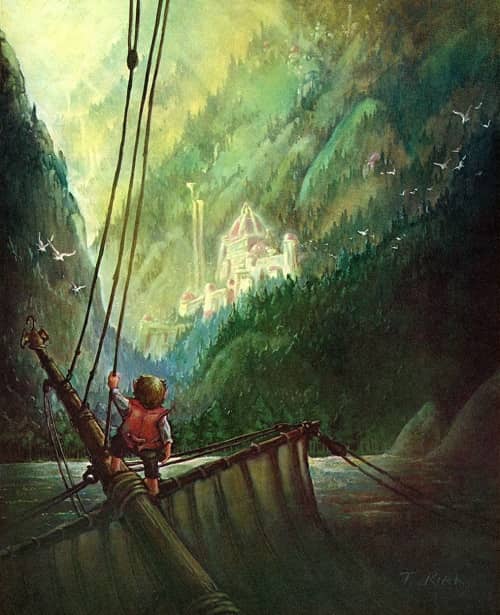 Thomas Parker is a native Southern Californian and a lifelong science fiction, fantasy, and mystery fan. When not corrupting the next generation as a fourth grade teacher, he collects Roger Corman movies, Silver Age comic books, Ace doubles, and despairing looks from his wife. His last article for us was Rod Serling’s Night Gallery: The Art of Darkness.

I vastly preferred Kirk’s take on Middle-earth to that of the Hildebrandt brothers, and not just because it came first. I find Kirk’s art more emotionally resonant and in keeping with the feel of Tolkien.

Somehow I’ve managed to never see those calendar pictures before. But I think they capture the spirit of the books brilliantly.

A friend referred to the Hildebrandts’ “wax figure” imagery, but they might have some period charm.

Tim Kirk contributed many drawings to the Tolkien and fantasy fanzines of the early 1970s, such as Mythlore. It was evident that he loved those books and was part of a fannish community of readers, artists, talkers!

Dale, I know what your friend meant – there’s a kind of “literalness” about the Hildebrandt’s illustrations that makes them less appealing to me than Kirk’s paintings. I do have a large Hildebrandt poster (signed by both brothers) that I like, because it shows all the members of the Fellowship.

Thank you for sharing this Thomas. Some of these are vaguely familiar, many though are the first time I have seen them. Very impressive. To be able to so accurately portray what Tolkien wrote about.

I have nothing against the Brothers Hildebrandt or any of the other artists who have worked on these calendars. It is just that it is Tim Kirk’s work that provides the backdrop to the world I see when I read a passage from Tolkien and close my eyes.

I 100% agree with everything you’ve said. My mother went to uni in the 70’s. An american student she befriended there gave me this calendar then. It shaped my imagination to such an huge extent. No one has ever captured Tolkien as well, for me. His work is so painterly. So alive. I especially like your comment on him choosing non action shots as it were. Those quiet moments are so poignant. So loaded with implication. Sadly I feel obliged to also say I met him by chance at Worldcon LA, and tried to impart how much i loved and was influenced by his work. He was just incredibly rude and dismissive. It was crushing. Never meet your heroes. It didn’t diminish my feelings about his art at all. I still love it just as much.

James, I’m very sorry you had that unpleasant encounter with Tim. It’s a very unusual experience as I’ve known Tim for over 50 years and have never, ever had a rude or dismissive moment with the man. He’s always been kind, encouraging and extremely polite. He is VERY modest and a bit ironic and perhaps reacted in the “dismissive” way to your praise because of that. Best to you.

I own the 1975 calendar. Pretty good shape. I never throw them away, just reuse them when the days align again. I wonder what the calendar is worth.

You won’t retire on it. On Ebay they go for anywhere from twenty to sixty dollars, depending on condition.

Thomas, I just came across this article and wanted to complement you on it. It summed up my own feelings about this calendar and more importantly the lifelong influence Tim’s charming vision of Tolkien’s world has had on myself and countless fans and readers. Like you, Tim’s Middle Earth IS the vision we see our mind’s eye whenever we read or reread the books.

On a very personal note, Tim’s art and later, friendship, was a seminal influence on both my becoming an artist (and later a filmmaker) and on my own style. He’s been a generous friend and mentor for 43 years, ever since I first met him at a LASFS meeting in 1969 and he did a sketch of a Mordor Orc for me on a cardboard laundry shirt backing.

To this day, his work remains a kind of “Grail” for me in my dreams and inspirations. I don’t see him that often, but just had lunch with him last week and he remains in good health and spirits and still working.

Thanks, Joe – glad you liked it!