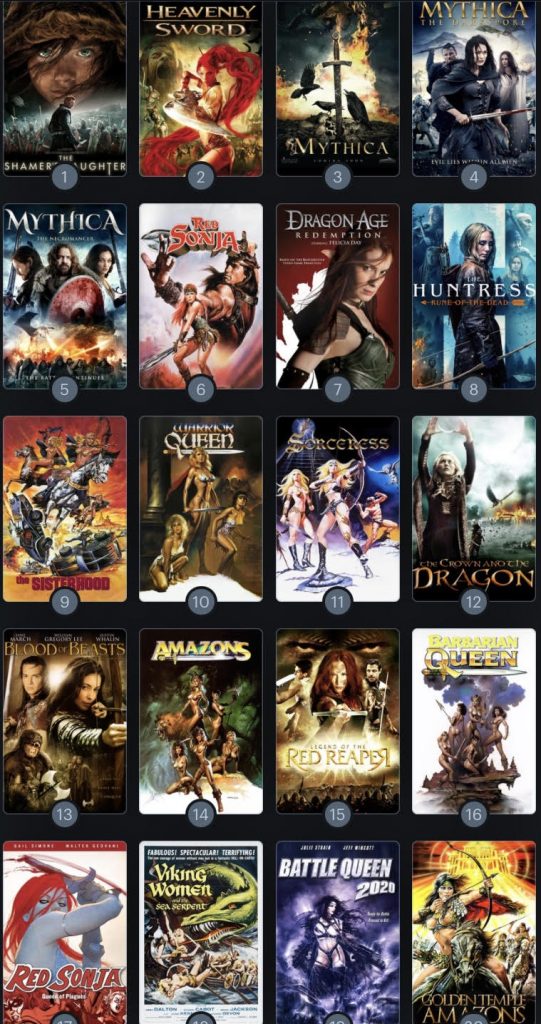 I am currently in the first draft mire of a fantasy novel, bogged down by self-doubt and synonyms, but bravely wading on regardless. It’s the sort of sweeping epic that could get picked up and made into a second-rate show by a streaming service desperate for content, but my lofty aspirations aren’t the problem right now; rather, it is my need to educate myself as a writer. I generally avoid over-describing characters, but on two occasions I found myself writing about a pair of fighters and focusing less on their motivations and more on the amount of exposed thigh between their boots and Faulds. This had nothing to do with serving the story, and more to do with titillating 14-yr-old me and, after some revision, it got me thinking about the influences that led me here.

Born in the late sixties, my formative years were spent in 1970’s Britain, surrounded by page 3, Benny Hill, Carry On and Leela on Dr. Who. Linda Carter’s Wonder Woman was all the rage, and Caroline Munro was in everything I loved. Women could be warriors but, by thunder, they had to be sexy too.

Nothing much changed over the last few decades, but things are starting to improve, from Brienne of Tarth to the modern incarnation of She-Ra, the representation of female warriors has made great strides (and I would argue that the longest strides have been made in kids’ shows, which cheers me), and this led me to my movie marathon. I wanted to find films that depicted women not only as able warriors, but also appropriately clad and independent.

To this end, I set some rules. As I am writing a fantasy novel, the films had to have a fantasy setting, or at least depict some form of magic, the main protagonist had to be female, it had to be a film I had never seen before, and it had to be free to stream on any of the services I use (Netflix, Prime, YouTube and Tubi). I also rated the films based on whether the protagonist needed to rely on anyone else, whether or not they passed the Bechdel test and if they were subjected to the male gaze and/or gratuitous nudity that didn’t serve the plot. Having flirted with the film industry myself, I am well aware how important sex and nudity are for sales in a saturated market and I’m not judging those films for targeting their demographic as boobily as possible, so this ultimately became a quest to find a positive character that I might use for inspiration. With that said, let’s dive in.

My favourite film of the bunch was actually a bit of a cheat, as it was the last one I watched having given up on finding another film that either met all the requirements, or that I hadn’t seen before (spoiler alert: not the only cheat film).

The Shamer’s Daughter is a 2015 Danish film, directed by Kenneth Kainz and based on the first book in the Shamer Chronicles by Lene Kaaberbøl. It’s solidly made, atmospheric, and features Dina, the titular daughter, who is a ‘shamer’, a witch who can gaze into your eyes and make you feel remorse for your life choices. She gets embroiled in a regicide plot and some realistic dragon shenanigans on the way to coming to terms with her powers and her role in the world. To be honest, I was so burned out by boob armour and bad acting by the time I got to this film, that I probably ignored my self-imposed rules, but I regret nothing and will watch the follow-up (and read the books) some time in the near future.

My next highest-rated film, and one that followed the rules more closely, was a bit of a surprise. Heavenly Sword, a 2014 fully CG film directed by Gun Ho Jung, was something of an experiment by Sony to see if they could create a motion picture based on assets from the game of the same name that was a success on the Playstation 3. The result is an entertaining story and remarkably strong female character, despite the notion that she was designed by a 12-yr-old who pushed the sliders for breasts and legs all the way to 11. The animation is cutscene quality, and the voice overs sound phoned in, but the story served up enough twists and turns to keep me interested, and it was Nariko’s struggle for acceptance in a patriarchal society, despite her obvious skills as a warrior, that won me over.

Next up were the first three in a five-film series that, interestingly, took the third, fourth and fifth spots on my list. The Mythica series is good, simple fun; it’s like enjoying a rollicking RPG without having to deal with real people or cheese puffs. The overall story concerns a young woman, Marek, who is learning to come to terms with her inherited wizardry, and, through the power of the Hero’s Journey, ends up going on a quest with a fighter, a rogue and a cleric. Marek is a great character and develops well over the course of the films, and her relationship with her companions is sometimes complicated but always entertaining. Some of the CG is a bit ropey, but everyone concerned throws themselves into their roles with humour and gusto, and I really enjoyed the ride. As for my criteria, Marek can certainly hold her own in a fight, although she is hardly outfitted for battle. That said, she does have a pauldron by the third film, so at least one shoulder is safe. The films mostly pass the Bechdel test, and the male gaze is kept to an absolute minimum, despite the characters getting hornier as the films progressed. Sadly, the last two films were not free to watch at the time, but I’ll catch up with the merry band at a later date.

So that’s my top five out of the twenty I watched. A few more blogs should cover the remaining films, and next up in Part II is the awkwardly OK group.

The Shamer’s Daughter and Heavenly Sword were both watched on Tubi, while the first three Mythica films were available on Amazon Prime, but I’m not sure they still are at the time of writing.

Neil Baker’s last article for us was Street Battles and God-like Machines: The Robots of Gotham by Todd Mcaulty. He is an author, illustrator, outdoor educator and owner of April Moon Books (AprilMoonBooks.com). His most recent books include the science fiction anthology The Stars at my Door and A Picnic at the Mountains of Madness. He currently lives near Toronto with his family and is officially an old fart.