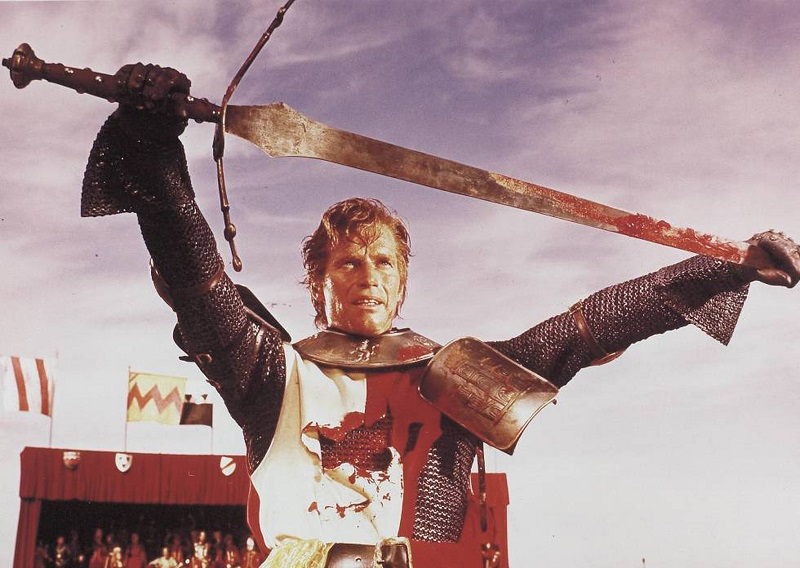 “Inspired by historical events”: the dreaded phrase that history wonks have come to learn usually means “bears little resemblance to historical events.” But hey, historical epics have to start somewhere, and it might as well be with a little history. To be fair, historical adventure film concepts often start from the best available accounts, but then scripts get rewritten and rewritten again, producers and directors have their own ideas about how the screenplay should get visualized, and before you know it you’ve got… well, El Cid (1961) for one, with a couple of other examples as well, including an admirable entry in The 300 Spartans (1962), which tries harder than most to get it right. I’ll be interested to hear what you think.

This grandiose three-hour retelling of the tale of Spain’s national hero is worth your time, as it’s lush and splendid to look at, has a memorable and soaring score by Miklós Rózsa, and some of the best scenes of medieval combat ever filmed up to its time. But it has its downsides, too: you’re going to have to put up with a choppy and inconsistent script, periods of barely coherent storytelling, and some hammy actors treating the scenery like Bazooka bubble gum.

Did I mention El Cid is three hours long? It even has an intermission, which is fine because it means ten extra minutes of Rózsa’s music — and believe me, after the second hour you’ll be ready for an intermission. But let’s go back to the beginning: the story is set during the Reconquista, those long centuries when the Christian kingdoms slowly drove the Moors out of Spain. Don Rodrigo Díaz (Charlton Heston), known as El Cid, was a knight who championed any ruler who behaved honorably, whether Christian or Muslim.

This beast was made during the peak of Hollywood’s era of grand historical epics, and in the first hour the film reveals its ambitions, which are considerable: the scenery, sets, and costumes all look spectacular, the main characters, all self-importance incarnate, posture and moralize without let-up, and there’s a lot of action in between the proud chatter. There are four fight scenes in that first hour, two of them simply tremendous, broadsword battles that alone are worth the price of admission. Those two fights were overseen by Yakima Canutt, the great stuntman turned action director, who also helmed the better battle sequences. Alas, the not-so-good fights were the work of lead director Anthony Mann, who did well composing character confrontations and grand scenic shots but was a duff hand when it came to combat.

This film is a prestigious star vehicle for its two leads, Heston and Sophia Loren as Ximena, Don Rodrigo’s wife, but in the first hour they just don’t seem to have much chemistry. Then we get into the movie’s second hour, and the wheels come off entirely as the movie begins to display the kind of problems that often occur when they’re written piecemeal by five different scripters. There are abrupt changes of scene and motivation, and characters make rash and even ridiculous decisions while spouting self-righteous speeches at each other — really, it’s like an opera without songs. If it were mounted on a big stage behind a full orchestra its plot might seem more credible, or at least you wouldn’t mind the flaws because there’d be arias. By the end of that second hour everyone hates everyone else and the Cid is exiled, just in time for the intermission.

There’s a lovely entr’acte — and then, in the third hour, everything improves. Heston and Loren finally seem comfortable with each other, the scenery-chewers mostly shut up (or are dead), and a coherent plot emerges that builds properly to a stirring climax. It’s quite good. What a relief!

In the 12th century there was a real Don Rodrigo Díaz or the Cid who even did some of the things Heston does in this movie, but history is outclassed by the legend, which has been told and retold in books, plays, verse sagas, and yes, even operas. (A lot of operas.) With so many successful models to draw upon, if this version of the tale is, in part, a jumbled mess, blame it on the Hollywood machine that elevated the roles of the leads above all, so that every piece of the production had to defer to aggrandizing the stars. Meanwhile, below the plane of the stars, the good actors get short shrift, while the weaker actors resort to the aforementioned scenery-chewing in hopes of being noticed.

But I guarantee you’ll be happy with the third hour of El Cid. Two immense medieval sieges are staged on a broad Mediterranean beach, which is genius, because you really couldn’t pick a better location to throw a war. The action, mostly directed by Canutt, is solid to excellent, and the actors, stars included, deliver their lines with a gravitas that was missing before the intermission. Plus, that buoyant Rózsa score just never quits. See it for yourself. 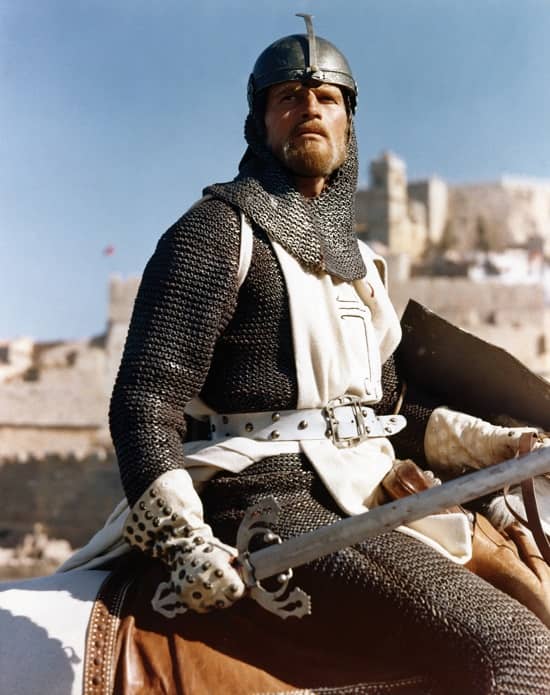 Julius Caesar Against the Pirates

“Based on True Events!” In 75 BCE, the young Julius Caesar was captured by pirates in the Aegean Sea and held on the island of Pharmacusa. Released after paying his ransom, he returned with a fleet and wiped out the pirate stronghold. Yes, that’s right: Julius Caesar, action hero!

Don’t mistake this for a cheap, quickie Italian peplum, this is a medium-budget historical epic, and a pretty good one. Lucius Sulla seizes Rome, declares himself dictator, and starts eliminating his political enemies, including Caesar (Gustavo Rojo). Wounded, Caesar escapes to sea on a raft with a noble friend and a comic sidekick. Eventually he is picked up by a Bithynian ship, which has also captured Plauzia (Abbe Lane), the woman of the pirate king Hamar (Gordon Mitchell). Caesar protects Plauzia from assault by Bithynian louts and she falls for him. Fearing Sulla’s enmity, the Bithynians betray Caesar to Hamar, and Caesar, his friends, and Plauzia are all taken to the pirate haven of Pharmacusa. Famously, Hamar demands a ransom of twenty gold talents for Caesar and company, but Caesar scoffs and says they’re worth fifty. While his friend is sent off to raise the ransom from the freedom-loving opponents of Sulla in Rome, Caesar scouts out a secret underground back door into the pirates’ cove—and when the Romans return, Caesar is ready to lead an attack on Hamar to free Plauzia and his friends.

There’s a lot going on here, and most of it’s good. The direction is solid, the lead actors are all pretty convincing, the romantic melodrama is standard but serviceable, plus there’s Aegean pirate revelry, big-ass Roman galleys with towering stern castles, a pirate gal catfight, and a lurid torture dungeon. What do you want, a chariot race?

Any account of the Battle of Thermopylae is a bit like the story of the Titanic — you know how it ends but you want to see how it gets there. This movie was filmed in Greece near the site of the battle, and it feels much more genuine than if it had been shot in, say, Santa Barbara. In 480 BCE the quarreling city-states of Greece are threatened by the huge invading army of the Empire of Persia, and a small contingent of Greek warriors led by King Leonidas of Sparta must hold off the Persians in a narrow pass, defending it long enough for the city-states to pull together an army of their own. The movie, the swan song of the veteran director Rudolph Maté, moves quickly and capably through the set up to the battle, presenting just enough of the politics on both sides to give the conflict meaning, while adding a forbidden romance between a couple of young Spartan lovers to personalize the stakes.

Then it devotes over half its running time to depicting the battle itself in five distinct phases, which is, after all, what we came for. On the eve of battle the Spartans stage a nighttime amphibious raid on the Persian camp, which infuriates King Xerxes and drives him to make hasty decisions in his attacks. The Persian cavalry fails to break the Spartan line; then the war chariots fail; even an assault by Xerxes’s bodyguard, the legendary Immortals, fails in the face of Leonidas’s superior tactics. Finally, after three days of fighting, the Greek traitor Ephialtes leads a force of Persians around the pass on a mountain goat path, and the situation changes.

The battle is well staged, mainly in long and medium shots so the viewer can clearly follow the troop movements, with just enough chaotic closeups to convey the grim butchery of the combat. The costumes are convincingly authentic, the music by Manos Hadjidakis is effective, and the speeches are kept short. The only real problem is that, except for David Farrar as Xerxes and Ralph Richardson as Themistocles of Athens, the acting is all as stiff and wooden as the Spartans’ spears, including that of cowboy star Richard Egan as Leonidas. We won’t go into detail about how it ends, because there are probably a few people who don’t even know what happened to the Titanic.

Never heard f the second one, but I think the first and third are great. I do not even mind the length of El Cid. It is gorgeous and stirring. Along with The Warlord and 55 Days in Peking, it is Heston at his peak.

I first caught EL CID during the inexplicable-summer-of-great-Saturday-movies-1984. With commercial breaks I swear it must have been on for 4 hours. Yet , even with the length, it had enough going on to keep my 13 year old self interested. Later in the early college years we took an afternoon to watch it again. Good times!

I haven’t heard of the 300 Spartans. I may have caught a bit of the Julius Caesar movie.

Perhaps the best scene in El Cid is the duel:

Another Ellsworth’s Cinema of Swords? Magnificent!

El Cid and The 300 Spartans are old favorites of mine; I can re-watch them anytime but I’ve never even heard of that Caesar vs the Pirates movie. I don’t recognize any of those names and yeah, that was me expecting the chariot race and I…what a minute! PIRATE GAL CATFIGHT??? I’ve got to see this movie now!

Thanks again for pointing me at a fun flick I didn’t even know existed!