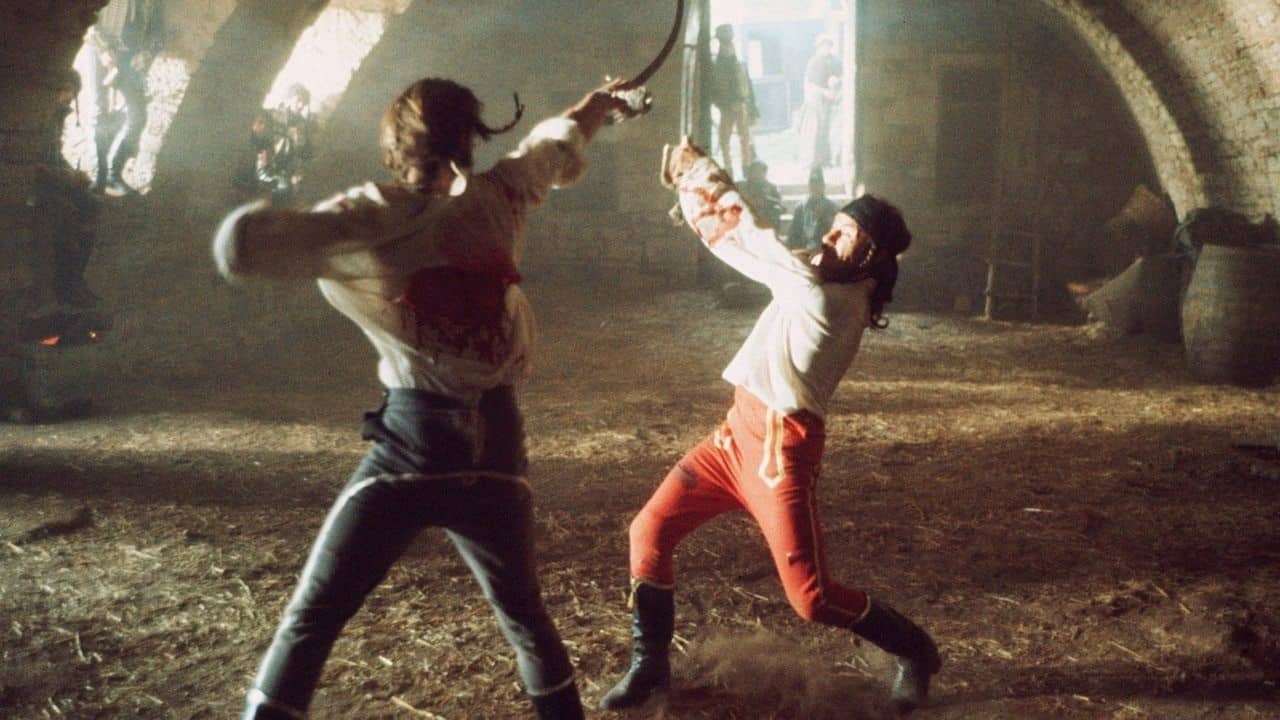 In the wake of the surprise success of Richard Lester’s 1973-74 Musketeers movies, there was a spate of swashbuckler films in the mid to late Seventies attempting to replicate Lester’s success — some by Lester himself. The trend peaked in 1977 with a trio of notable films all based, like The Three Musketeers, on classic Victorian and Edwardian adventure fiction. The Salkind brothers, who’d produced Lester’s Musketeers films, tried again with Crossed Swords, based on Mark Twain’s The Prince and the Pauper and following Lester’s example with another all-star ensemble cast. Britain’s ITV, which had done well a couple of years before with an adaptation of The Count of Monte Cristo starring Richard Chamberlain (The Three Musketeers’ Aramis), followed up with another Dumas adaptation, The Man in the Iroin Mask, also starring Chamberlain. Best of all was a movie not inspired by the Musketeers films, though it did use their outstanding fight director, Bill Hobbs: The Duellists, directed by Ridley Scott in the vein of Stanley Kubrick’s Barry Lyndon (1975). Let’s check them out.

The Duellists is the sine qua non of the Cinema of Swords, the essential of essentials. It’s based pretty closely on Joseph Conrad’s 1908 novella The Duel, expanded with added historical context by screenwriter Gerald Vaughan-Hughes. Acclaimed director Ridley Scott’s first feature, its stunning visual look is directly influenced by Stanley Kubrick’s Barry Lyndon (1975); like that film, The Duellists was shot almost entirely with natural lighting, including the interiors, rendering it with a painterly look and Renaissance-style compositions but without Kubrick’s fussiness.

The story is an account of six duels between two French cavalry officers over a period of sixteen years during the Napoleonic wars, 1800 to 1816, told from the viewpoint of Armand d’Hubert (Keith Carradine), a cool-headed rationalist who is nonetheless trapped by the gentleman warrior’s code of honor into a succession of fights with the fiercely irrational Gabriel Feraud (Harvey Keitel). Between the duels, d’Hubert’s life evolves from that of a footloose lieutenant to a brigadier general who is a settled family man, raising the stakes so that he has more to lose at every encounter. The historical settings — situations, politics, costumes, equipment — are meticulously drawn, detailed and colorful yet clear, and the locations in the Dordogne of central France are stunning. It’s a gorgeous picture.

The duels themselves, mounted or on foot, with small swords, cavalry sabers, or pistols, are all different, but similar in how suspensefully they are staged and in their convincing realism. The fights were choreographed by the great William Hobbs, who was told by director Scott, “I don’t want any of that old tosh, I want it real.” The duels convey the profound sense that death is only a moment away, and both opponents know it. “We wanted to get across the awful feeling that you believe you’ll be dead on the floor,” said Hobbs. “In the end, the realism is the fear.” In this, Hobbs is entirely successful, and the fencing in The Duellists is the breakthrough that established him as the best European-style fight director of his generation.

The performances by leads Carradine and Keitel are excellent, despite the occasional incongruity of their American accents, with Keitel’s glowering and incendiary Feraud particularly memorable. They get strong support from Albert Finney, Tom Conti, and Edward Fox in minor roles, and especially from Diana Quick and Cristina Raines as d’Hubert’s mistress and wife and Meg Wynn Owen as his sister. The haunting soundtrack is an early effort by Howard Blake, a classical-sounding score that betrays another Kubrick influence. If you haven’t seen The Duellists, don’t delay — there, that’s your evening sorted. 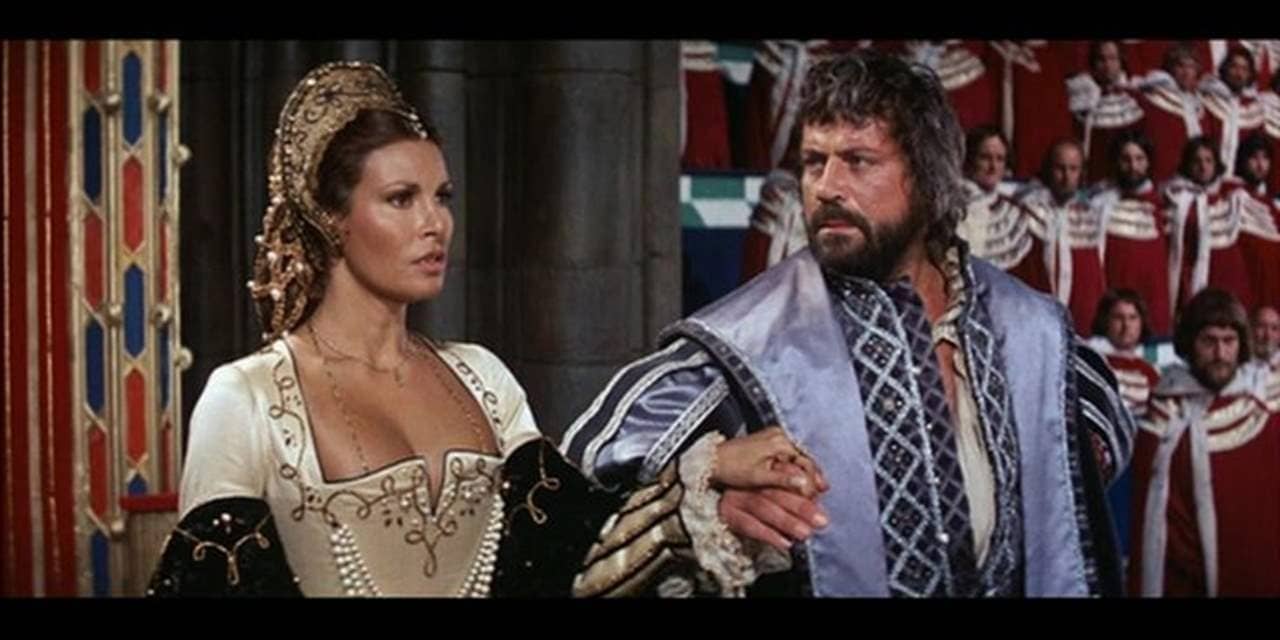 Producers Alexander and Ilya Salkind had had a substantial success with The Three Musketeers (1973) and The Four Musketeers (1974) and decided to try another premium adaptation of a classic swashbuckler with an all-star cast, this time drawing upon Mark Twain’s 1881 novel The Prince and the Pauper. It was a good plan, but a couple of things went wrong.

First, the resulting film has a problem with tone. Inspired by both Charles Dickens and Alexandre Dumas, Twain’s novel is a light boys’ adventure that nonetheless addresses issues of social inequality. The movie retains or even emphasizes the novel’s critique of society while dropping nearly all of its humor and whimsy, and the result is pretty cheerless. Scripter George MacDonald Fraser was going for a corrective to the romantic view of the Tudor era as seen in films like The Sword and the Rose (1953), but he went too far into the grim and gritty for the material. It doesn’t help that the prince and his pauper double have three father figures in John Canty (Ernest Borgnine), King Henry VIII (Charlton Heston), and soldier of fortune Miles Hendon (Oliver Reed), all of whom are perpetually shouty and angry.

However, this is a lavish production, well directed by Richard Fleischer, with a cracking cast, so the tone issue isn’t fatal. The nearly lethal blow is the casting of former child actor Mark Lester (Oliver!, 1968) as the near-twins Prince Edward and Tom Canty. Lester is terrible, just embarrassingly bad, and his performance got such awful reviews that he retired from acting at age 18 and never made another picture. He’s in nearly every scene in the movie, and he stinks.

But, but, but, Oliver Reed and Charlton Heston and Ernest Borgnine! Not to mention Rex Harrison, Raquel Welch, and George C. fer chrissake Scott. Yes, they do make a difference — Rex Harrison’s cheerful snarkiness nearly saves the movie by itself. There are some fine rough-house mêlées, mainly because Oliver Reed still hadn’t learned how to fence, and Scott’s scene as the Ruffler, a sardonic beggar king, is a hoot and a half. Welch gets short shrift, alas, showing up late in the movie and given only a handful of lines, though she does fine with what she’s granted. And despite the tonal issues, Fraser’s script has plenty of sharp dialogue for these top-notch actors to snap at each other with. Plus the costumes are excellent and the shooting locations, Penshurst Palace in England and city sites in Budapest, are lovely.

But Mark Lester… no. Just no. 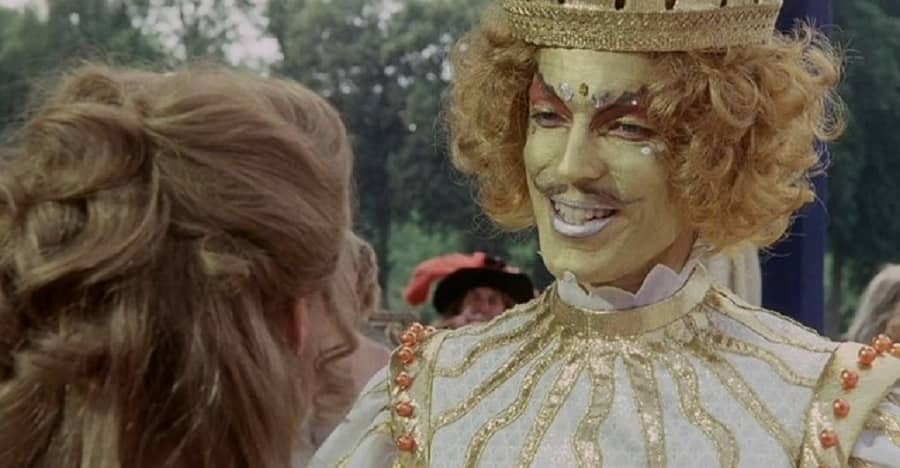 Dumas’s novel The Three Musketeers, especially its first half, is a self-contained story that’s almost made for screen adaptation. But The Man in the Iron Mask? Not so much: at the very end of Dumas’s long Musketeers Cycle, Iron Mask is the final 90 chapters of a 280-chapter mega-novel, with 600,000 words of set up before it unfolds the conspiracy to replace King Louis XIV with his twin brother Philippe. A screenwriter couldn’t possibly summarize that lead-in and shouldn’t even try; they have no choice but to pick a few characters and themes from Dumas’s oversupply and try to make a tidy tale of it. William Bast, who wrote this script for this version, did a reasonable job at that task, but this TV movie, despite its excellent cast, doesn’t entirely succeed at putting Bast’s story across.

The cast, as mentioned, is excellent: Richard Chamberlain as King Louis and Prince Philippe, Louis Jourdan in a ridiculous page-boy haircut as d’Artagnan, Ralph Richardson as his ally Colbert, Patrick McGoohan as their opponent Fouquet, and Jenny Agutter surprisingly good as Louise de La Vallière, whom Louis, Philippe, and Fouquet all love. The costumes and production values are quite good for a TV movie, and astoundingly, they shot it at the actual historical sites of King Louis’s palace of Fontainebleau and Fouquet’s estate of Vaux-le-Vicomte, settings that add a great deal of credibility to the story. The film even reuses some of the extravagant ballet costumes from Richard Lester’s Three Musketeers.

In Bast’s version of Dumas’s story, Louis XIV is a terrible king, lazy and lecherous, so Colbert and d’Artagnan scheme to replace him with his modest twin brother Philippe, who has been raised in the country with no knowledge of his royal heritage. But Fouquet learns of their plot and has Philippe taken from Paris and imprisoned on the Île Sainte-Marguerite (also using the actual location), clamping his face in an iron mask so no one will see his resemblance to the king. Fortunately, d’Artagnan gets him out, persuades Fouquet that Philippe was killed in the escape, and Philippe is then trained for the switcheroo, falling in love with Louise de La Vallière along the way.

There are some good times to be had here. Chamberlain is clearly enjoying himself when playing King Louis, and the royal ballet scene, in which he flounces about as Apollo in gold glitter makeup, is almost worth the price of admission. Ralph Richardson and Patrick McGoohan twitch their eyebrows and curl their lips at each other in majestic disdain, and the great Vivien Merchant has a couple of excellent scenes as Louis’s acerbic Spanish wife, Queen Maria Teresa.

The problem is the direction and pacing: Mike Newell, much acclaimed later in his career for movies such as Four Weddings and a Funeral and Donnie Brasco, is directing his first feature film here. It’s apparent he doesn’t yet have a grasp of building and maintaining suspense, so much of the movie just limps along from one scene to the next until it all ends rather abruptly. But watch it anyway for the cast and those fabulous sets.

Great article, Lawrence! I especially agree on “The Duellists”! What a gorgeous picture with incredible fights. I definitely second Lawrence’s order that if you haven’t seen it, go find it and watch it. You will be rewarded.

The Duellists is one of my all time favorite movies; I have watched it many times and it never grows old.
The Man in the Iron Mask, though, sounds ridiculous. Why in the world would they reverse the roles, with D’Artagnan trying to replace the King and Fouquet trying to stop it? The drama of the book—which is fabulous, as all the Musketeer novels—is D’ARtagnan versus Aramis, with the side plot of Louis XIV maturing.

Another Ellsworth’s Cinema of Swords? Hurrah!

Great post, Mr. Ellsworth! Bill Hobbs’ work in the Duelists is just amazing and while I think that all three films should be watched (although for different reasons), I have a confession to make: I have never been able to watch Crossed Swords all the way through in one sitting. Mark Lester’s performance is just so grating that I can’t bear it.