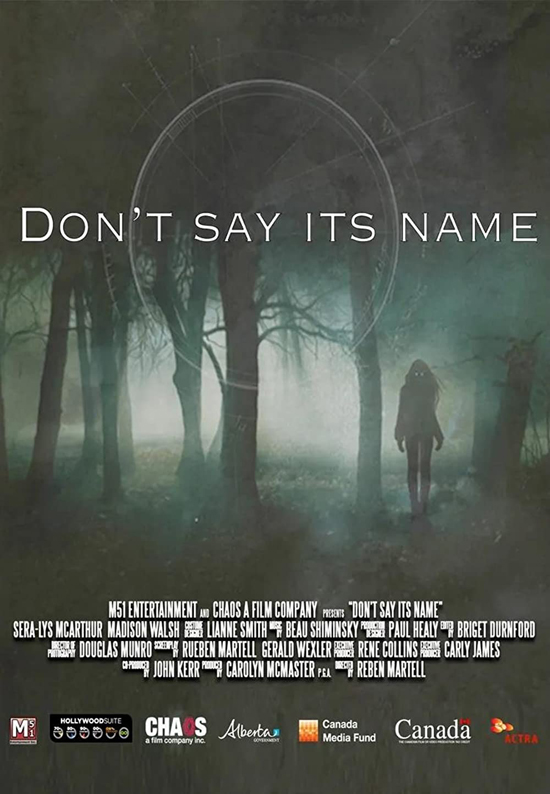 Don’t Say Its Name is a feature film from director Rueben Martell, co-written by Martell with Gerald Wexler, that had its world premiere at the 2021 Fantasia Film Festival. It’s a film set in a northern Indigenous community divided by an offer from a big mining company promising money in exchange for the rights to tear up the land. But then murders start happening, some of them apparently supernatural.

The story starts with the murder of anti-mining activist Kharis Redwater (Sheena Kaine) one night on an isolated icy road. As law enforcement investigates, in the person of middle-aged Betty Stonechild (Madison Walsh), other killings happen — violent deaths, victims torn apart by some invisible force in front of witnesses. Betty deputises Park Ranger Stacey Cole (Sera-Lys McArthur, also at Fantasia this year in the short “She Whistles” in the Born of Woman showcase). But even her experience fighting in Afghanistan, which has left her with a bad case of PTSD, is tested by the mysterious entity.

The film’s been billed as a horror movie, but I’d call it dark fantasy. This genre quibble speaks to the effect of the film. There are horrific killings, and there is a supernatural entity responsible, but the main characters aren’t terrified by it. They’re cautious, of course, as they’d be cautious of a creature like a maddened bear or wolf, but their actions aren’t driven primarily by fear, they don’t break down in terror or even come close, they never panic. Confrontations with the creature are marked by desperation but not mindless terror. The point of this is that the story is not one of an isolated community terrorised by the supernatural, but a story of resourceful and determined women trying to protect their home and loved ones.

They’re vivid and engaging characters, too. Betty’s a no-nonsense auntie (to her nephew Ben, played by Samuel Marty) with a wry sense of humour; Stacey’s an angry person who’s haunted by terrible things, and is not only good at violence but strong-willed and passionate. They feel like characters who could sustain a series of stories, in whatever genre. Supporting characters are sketched in effectively, notably elder Carson Stonefeather (Julian Black Antelope), even if they get relatively little screen time.

The film has a lot to do; the movie’s only 84 minutes long, and it has a lot of plot to go through and a lot of information to get across to establish not just the characters but their community, as well as the nature of the supernatural forces they have to deal with. Given that, the dialogue does a good job not being purely expository. It’s often procedural, but not purely so, and it’s generally convincing. The actors handle it well, which helps a lot. 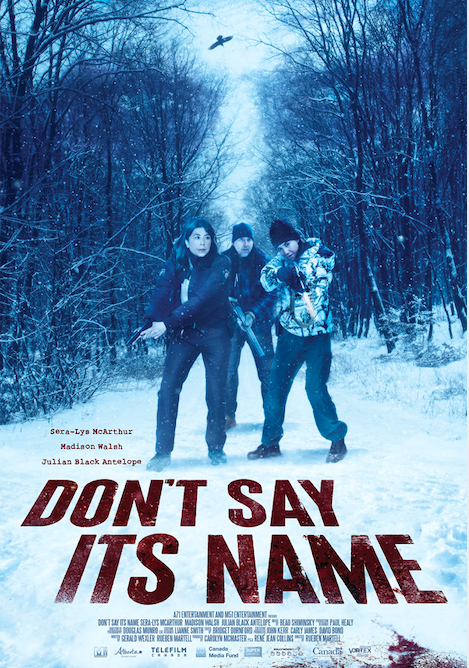 The film manages to touch on a lot of different issues affecting Indigenous people and communities without feeling strained. Characters are divided in their reaction to the mining company’s proposition. Betty complains about the lack of funding she gets compared to White-led police forces. Elements of the film touch on cultural appropriation, the murder of Indigenous women, and the question of who gets to be officially designated as Indigenous by government bureaucracy. It all works because the story’s shaped in a way that naturally incorporates all these things — this is the fabric of the lives of the characters and of their experiences.

Visually I thought the movie was an odd mix. Some of the interiors have a flat TV-like lighting. The exteriors, on the other hand, are beautiful. The story takes place largely in daylight (again unlike most horror movies), and the snow-covered northern scenery’s spectacular. The land’s central to the story, so that’s symbolically appropriate. And perhaps the place also says something about the people who live in this environment; but at any rate it’s also something that’s a pleasure to look at.

In fact, it’s impressive that the land doesn’t overshadow the characters — that the human scale is not lost among the snow and forest. One of the strengths of the movie is the way it establishes a sense of community among its characters. The histories and emotions the characters share, their agreements and disagreements, come across well. There’s a sense of the place not just as a physical space in the north but a human dwelling, a place shaped by the people who live there as well as they by it.

The myth that haunts this place is used well narratively. The mystery’s strong, and the on-camera violence of the deaths gives a sense of the danger of the entity responsible and the importance of stopping it before more damage is done. And there’s more at work behind the violence than pure evil, but rather a motive that goes to the core of the issues of the film. Again, I think the way the supernatural’s used here has more to do with fantasy (broadly defined) than horror, if one accepts the word as appropriate to use for a living mythology (as one speaks of ‘Christian fantasy.’

I did think that the story could have used more of a sense of the mining company. We effectively see one guy, who does a number of things for the movie, but is a bit of a small figure compared to the forces he represents. Running time and budget are probably concerns here (Betty complains about the resources she gets relative to non-Indigenous police, and it’s hard not to suspect that’s a direct echo of the process of filmmaking), but for whatever reason there is a sense of a lack of scope.

Still, in all this is a solid entertaining movie that overcomes the limitations of its resources to tell an engaging story with strong characters. There’s some food for thought in the nature of the supernatural, and in its relationship to culture — that is, as the movie takes on topical issues, there’s a level of the story to do with the place of myth in the modern world. But this is mainly a fun contemporary fantasy film about people struggling against dark supernatural forces. Which is no small thing.