Hercules and the Captive Women (Italy/France, 1961)

The Steve Reeves Hercules (Italy, 1958) was a big hit on both sides of the Atlantic, proving there was a market for shirtless strongman movies in drive-in movie theaters across America. The Italian movie industry obliged by churning out reams of low-budget sword-and-sandal “peplum” films, many of which had heroes named Goliath or Maciste in their original forms. When they were dubbed into English, for name-recognition purposes most of these strongmen were renamed Hercules, giving us a bewildering array of Hercules and the… movies from 1960 through 1965, when they were abruptly replaced by the so-called Spaghetti Westerns. Not many of these slammed-out Herc films are worth spending 80 minutes on today, but a few of them hold up and are worth a look. Here, for your delectation and delight, are three very different examples.

This is a strange one, even for an Italian Hercules movie. The first half hour is surprisingly dull but then things start to get weird, and as the weirdness notches up the film keeps getting cooler. Weird. But cool.

It stars Reg Park, the English bodybuilder (and mentor to Arnold Schwarzenegger) in the first of the four Hercules films he made at the height of the peplum sword-and-sandal craze. Park was a personable guy with just enough charisma and range to manage Hercules’s three basic moods, a perfectly adequate hero, but at first it seems like his starring vehicle just can’t decide what it wants to be. The King of Thebes, Androcles (Ettore Manni) and his best friend Herc are riding through Ancient Greece when they are confronted by a vision from the gods, who use crappy special effects to foretell an apocalypse coming to Greece from the west. Androcles gravely vows to face this horrible doom, but then the movie slips sideways into a comedy, and not a very good one.

Androcles is unable to persuade his doofus Greek fellow kings to join his expedition, and even Hercules turns Andy down because he wants to stay home with his wife and son. Cut to Herc waking up on Androcles’ westbound ship after having been drugged and shanghaied by the king and his “humorous” dwarf sidekick. Ha ha! Herc just smiles, refuses to help and goes all passive aggressive. He even sleeps through the crew’s mutiny and wakes up only just in time to save the ship, exerting himself with a Mighty Feat of Strength. And about damn time, too.

They sail west into an uncanny fog, there’s a supernatural storm, and the ship wrecks on the coast of what turns out to be Atlantis. Herc washes ashore alone and immediately has to save a trapped maiden from a shape-changing monster. As monsters go it isn’t very impressive, but at least it’s a step in the right direction.

The maiden leads Herc to the Atlantean capital, and as soon as Bad Queen Antinea (Fay Spain) arrives in a chariot drawn by twelve snorting stallions, we know we’re finally in for a good time. Atlantis is just solid weird: it’s got a stone-faced and somnambulant bad queen who’s the maiden’s mom, a company of invincible, identical guards in ominous black armor that looks like it was designed by Hugo Boss, chanting priests of Uranus (insert joke here), and shipwrecked King Androcles who’s been zombified by mystic mind-wipe mist. Also child sacrifices, leprous slaves, a vizier with glowing eyes, an acid pit — and why, you ask? Because in a forbidden cave atop a mountain there’s a glowing green rock formed from the blood of a dead god that emits Vibes of Evil, that’s why. Duh.

Labors! Herc leaps into action, and one must admit he looks good doing it. He stops the sacrifices, frees the slaves, rejects the Bad Queen’s love, rescues Androcles and the dwarf and the maiden and his son (did I forget to mention his son?), and finally destroys the Evil Vibes Rock by his favorite expedient of pulling the ceiling down. It never fails! Cue stock footage of Vesuvius erupting, and then — well, it’s Atlantis, do I have to spell it out for you? 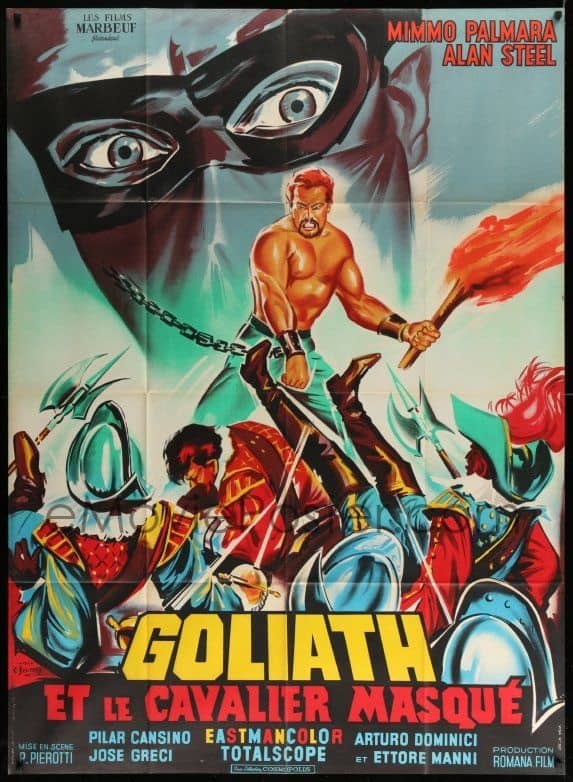 Hercules and the Masked Rider

This is a weird genre mashup of a strongman peplum picture crossed with a masked outlaw adventure, a combination that shouldn’t work but does. In Spain circa 1630, wicked Don Ramiro (Arturo Domenici) covets the neighboring domain of Don Francisco (Renato Navarrini), and intimidates the aging Francisco into letting him marry his daughter, Dona Blanca (José Greci). But Blanca loves her cousin Don Juan (Mimmo Palmara), who’s just returned from the war in Flanders; he tries to spirit Blanca away to get her out of the marriage, gets caught, and is banished by Don Francisco.

On his way to exile, he’s captured by a gang of Gypsy bandits, who challenge him to survive three minutes in a fight with “Hercules” (Alan Steel, called Goliath in the Italian original). Juan and Hercules forge a manly bond by beating the stuffing out of each other, so Juan joins the band and immediately starts figuring out how to use them to save Blanca. Since the Gypsy queen Estella (Pilar Cansino) falls for him at first sight, the Gypsies are all in. Idea! Juan dons a crimson domino mask, cape, and gloves and becomes… the Masked Rider!

Outlaw cavalier adventures ensue, drawing liberally from the traditions of both Zorro and Robin Hood. The Masked Rider is an invincible swordsman, and Hercules is just plain invincible, but Don Ramiro has many morion-helmed soldiers, and affairs are nip and tuck until Ramiro’s lieutenant, Captain Blasco (Ettore Manni) falls for the Gypsy queen and comes over to the good guys, tipping the balance. In the process we’re served up every Spanish, Gypsy, and flamenco stereotype imaginable, plus regular Mighty Feats of Strength from Hercules — it’s especially impressive when he rips out the gallows upon which Don Ramiro had intended to hang the Masked Rider and uses it to sweep away his morioned goons. The acting here is adequate, the pacing is decent, and the fencing is passable. Will noble passion win out over avarice and cruelty in the end? Could be! 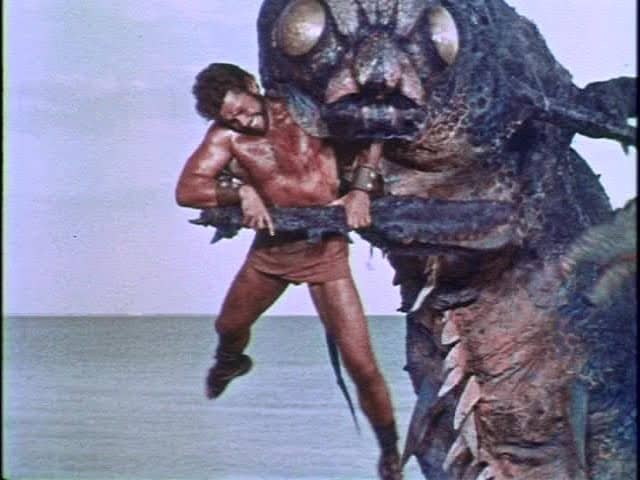 Hercules and the Princess of Troy

This is a pilot for a Hercules TV series that didn’t get picked up — which is a shame, because it’s pretty good. It’s got Gordon Scott, the second-best peplum Herc after Steve Reeves, in the title role, tight direction from Albert Band, and decent production values. At 47 minutes, it’s short for a feature, but was released to TV and then also to theaters as part a double or triple bill, likely at your nearest drive-in.

Troy is being terrorized by a sea monster, a punishment from the gods for some unknown transgression: each month a maiden is chosen to be tied to an offshore rock to be taken by the creature. (Yes, it’s the myth of Andromeda repurposed.) Some Trojan families try to escape by fleeing out to sea, only to be captured by pirates. Fortunately for them, Hercules happens by in his ship the Olympia, along with his comrades Ulysses (Mart Hulswit) and Diogenes (Paul Stevens). There’s a sharp boarding action — this Hercules is armed with a Greek short sword, and he’s not afraid to use it — Herc rescues the Trojans, and then learns of the menace that drove them away. He resolves to put an end to the monster’s depredations, and just in time, too, as the Princess Diana (Diana Hyland) has been chosen as the next victim!

There’s no time for shilly-shallying, so the story races ahead, with enough twists and turns and opportunities for Mighty Feats of Strength to keep the viewer glued to the screen. There’s treachery, of course — never trust the ruler of an ancient city! — plus nods to Greek myth such as a pair of invulnerable white wonder horses, the Grotto of Minerva, and of course that sea monster, a really big lobsteriffic puppet that Herc has to fight mano-a-clawo after Diogenes’ Greek fire drives it ashore. Good stuff. Watch for Italian action star Gordon Mitchell in a brief appearance as the pirate captain, fighting Herc in a Duel of Two Gordons.

Fantastic! I was wondering if any of these were worth watching….

Another Ellsworth’s Cinema of Swords??? By the Mighty Thews of Hercules!

I remember seeing Hercules and the Captive Women because I remember those identical guards in the black armor, but I’ve never seen either of the other two films. They sound like they’re worth a look, so thank you again for pointing us at film treasures that would otherwise be lost to us.

I wonder if that first film is the reason why I put Rocks of Evil Vibes in so many of my campaigns? Yet another way I have been molded by Peplum!