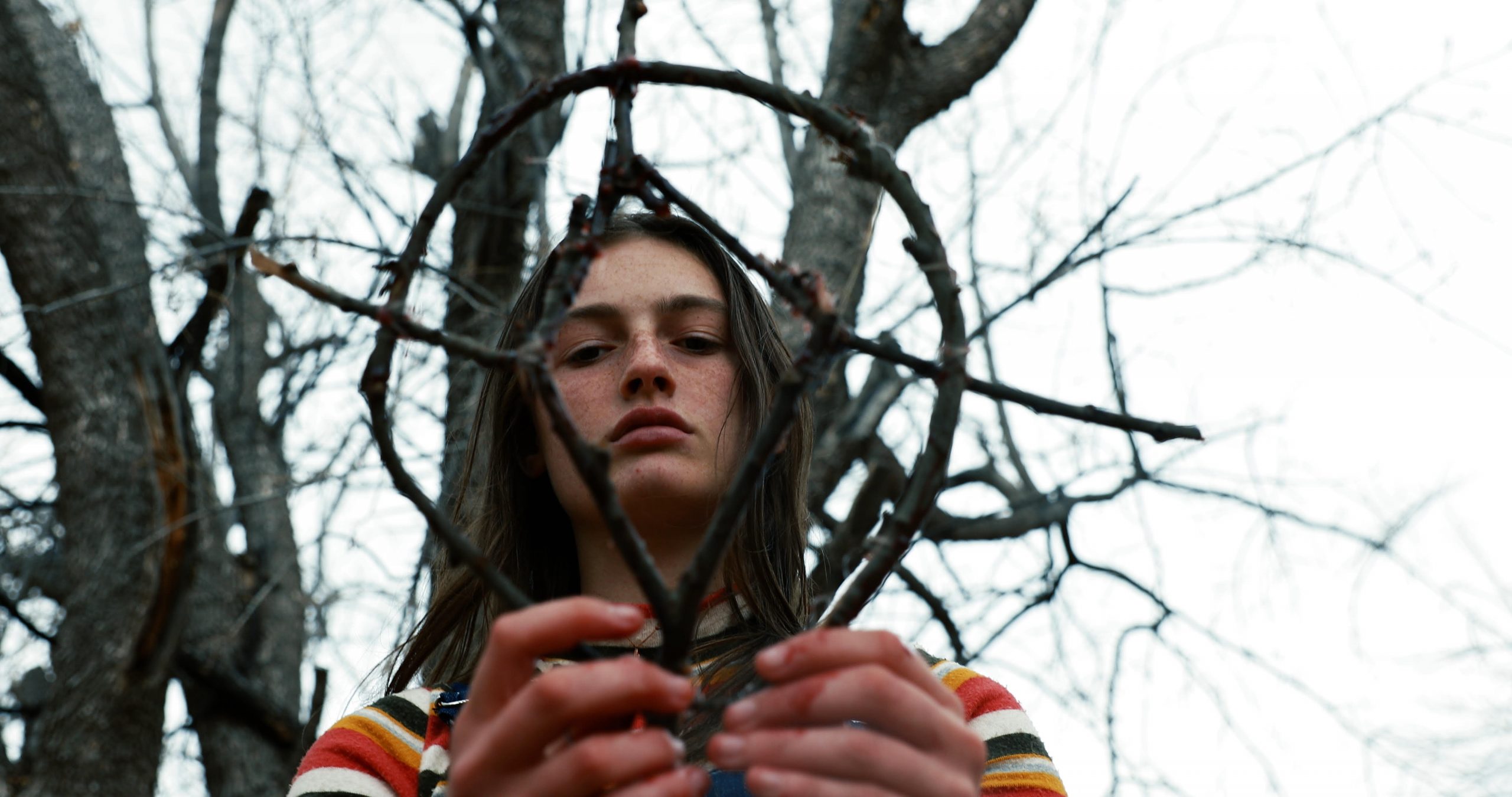 “A Tale Best Forgotten” is a five-minute film conceived and directed by Sweden’s Tomas Stark, based on a poem by Helen Adam. The text’s set to music, and sung over a long take in which the camera tilts back and forth to bring out the story; you can read the original here. It’s difficult to find detailed credits for the film, but it looks like Sebastian Bergström composed the tune to which Adam’s murder ballad is set, though I can’t find who does the singing. In any event, the evocative lyrics are given a fine cinematic accompaniment, as the images of the house and river create a lovely brooding atmosphere. I note that the first line of the poem, which specifies a certain mythic meaning to the ‘dog-headed man,’ is dropped; without it the film finds its own meanings for things, creating a more fairy-tale feel. In all it’s extremely strong work that displays a powerful visual imagination.

Bundled with the short was one of the movies I was most looking forward to at Fantasia 2021, Hellbender (or, as it’s sometimes written, H6llb6nd6r). It’s the sixth feature film from the Adams family: John Adams, his wife Toby Poser, and their teen daughters Zelda and Lulu. They make films as a collective — no studio backing, just their own resources, with locals and friends as actors. Different family members handle different tasks as strikes their fancy, with Poser usually the main writer, John Adams interested in sound, and Zelda Adams interested in cinematography and camerawork. I saw their previous movie The Deeper You Dig at Fantasia 2019, and enjoyed it; I was eager to see the follow-up. And while I liked The Deeper You Dig, I think Hellbender is a major step forward.

The movie follows a mother (Poser) and her 16-year-old daughter Izzy (Zelda Adams) who live alone in the woods. The mother, never named, won’t allow her daughter to leave home, telling her she has a disease that means she must stay housebound. But although Iz gets along well with her mom — the two of them play in a two-person metal band called Hellbender — she wants something more. This becomes particularly clear when she runs into Amber, a young girl in a cottage in the wood.

The two become friends, but even beyond the question of whether Iz has the social skills to develop a meaningful relationship with a person her age, it soon becomes clear there’s something supernatural about her and about her mother. Iz has a power, and appears to feed off death. It’s up to her mother to explain what is happening to her, and what it all means, and the movie is in essence a kind of character study of their unconventional bond. (I say unconventional. I assume most mother-daughter talks don’t involve learning about the magical power inherent in consuming maggots. But that’s really only a guess.) 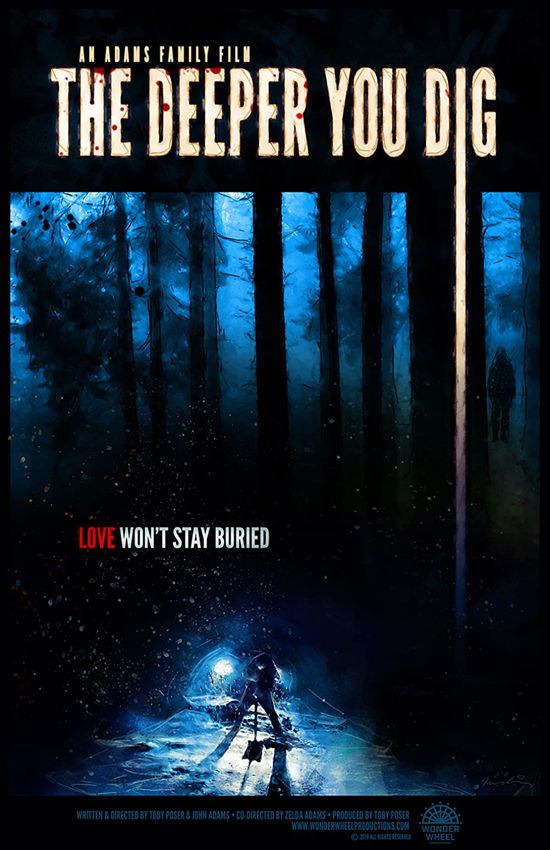 Like a lot of good horror movies, Hellbender is richly atmospheric. Unlike a lot of horror movies, the atmosphere often comes from nature in a state of cool green lushness. The movie talks about natural cycles, and particularly about death as part of that cycle, but also gives us a deep forest in full leaf as well as across various seasons. Theme and images reinforce each other, as the shadows of the forest seem more pronounced as we learn more about the occult nature of Iz and her mother. A detailed soundscape helps here, and the movie’s attention to aural detail creates the sense of a living world within which mother and daughter live and play their parts.

This is overall a good-looking movie, incredibly stylish, but never an exercise in pure style — each shot seems to do something for the story as well as look nifty. Special effects are used judiciously but effectively; moments of vision are brought out with psychedelic camera effects that are sometimes familiar from older films but feel new here, used with specific meaning. The house where Iz and her mother live is old, a witch’s home, and a striking contrast with the McMansion where Iz goes to hang around with Amber. (Also effective is a sign on the approach to the house that reads “Beware / of / well / just / beware.”)

There’s also an interesting use of vertical space that emphasises not just where characters are mentally, but often where they are relative to each other: situated above or below, talking down or looking up. There’s a book that holds secrets, and it is high up in the house, so one ascends to gain knowledge. The climax pushes in the other direction, as realistic geography dissolves.

The acting’s very good; Zelda Adams won the festival’s best-actress award for her work, and she carries the film quite capably. The ending pushes her character in some dramatic directions, and I think she manages to make a difficult transition work and fit in with what we see of Iz in the rest of the film. Toby Poser as her mother is also very strong, watchful and cautious and yet in love with her daughter, eager to share moments with her while also fearing for her. It’s no surprise that the two of them convey a strong bond on film, but the texture of the relationship that emerges is a large part of the richness of the film — the kind of subtextual emotional details that comes from two actual lifetimes together.

Most importantly, though, the story here is simple but strong. The isolated youth who yearns to move beyond the family home to be with peers is a familiar shape for a tale, but Hellbender finds some interesting variations. The way a bad choice brought on by peer pressure actually leads to a deeper relationship between mother and daughter. Or the way the youth ends up growing rapidly beyond her peers, but not beyond her family — something that sounds simple but is developed here with irony and perception.

I was struck as well by the way the story uses the mythology it creates. I thought The Deeper You Dig only scratched the surface of its myth — it was effective, but it felt a bit like it was glancing at another story. There’s nothing like that here. There’s a relationship between mother and daughter that grows out of their magic, and the magic itself is explored just enough to be otherworldly without overwhelming the mother-daughter link. There is the sense of things truly occult, of sinister secrets; and there is an ending that gives a satisfying development of what we’ve learned. And all these things fit together, the magical and the domestic and the sinister braided neatly.

I will say that the one part of the film that wrong-footed me as I watched it is the very end. The climax is dark and satisfying, but the denouement’s brief. It’s not exactly hurried, but it’s short. It gets its point across, establishing what the actions of the climax mean, but it feels like the conclusion to a shorter movie. It’s not that more information is needed, but one wonders if the new states of the characters might have been explored a bit further.

That’s a quibble; this is a low-budget film that tells a solid story, has a striking look, and conveys a nuanced emotional reality while also presenting an interesting occult mythos. There’s a lot of creativity here, and creative ideas used with a purpose — a mother and daughter living alone and forming a psych-doom metal band is distinctive, but also something the movie uses to talk about the characters. I’ll note also that the film does a good job in establishing the essential witchiness of the characters while also distinguishing them from real-world Wiccans; these are women who know secrets of the woods and live with a peculiar connection to the powers of death, and so play into the traditional image of the witch, but who are well apart from actual witches. It’s a movie about the feminine, and about magic, but without the romanticism that often comes in stories about those two things together. In all Hellbender is one of the strongest movies I saw at the festival, and it’s coming to Shudder sometime in 2022.