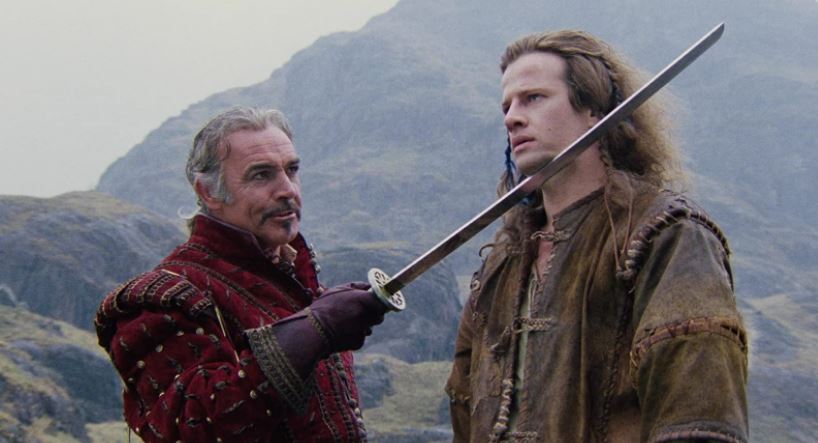 Nowadays, so-called “Timeslip” stories are so popular it’s considered a genre unto itself, but in the Eighties that was not yet the case, particularly on the screen. However, inadvertent time travel is an appealing notion, with literary roots going at least as far back as Twain’ s A Connecticut Yankee in King Arthur’s Court, giving the author the opportunity of juxtaposing past and present for the purpose of making a point or two about perceived failings of the modern era. Social criticism aside, it’s also a useful plot device for kicking off thrilling adventures, as this week’s timey-wimey trio demonstrates. 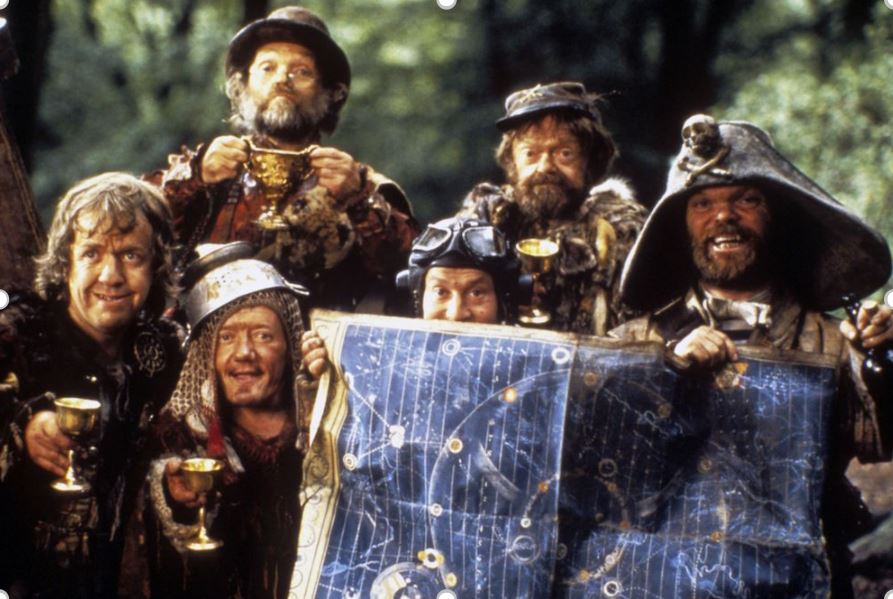 This superbly imaginative fantasy was director and co-writer Terry Gilliam’s breakout success, the hit that ensured his continued career as a cinematic visionary. It’s an episodic series of adventures across history and myth told from the viewpoint of Kevin (Craig Warnock), an eleven-year-old boy struggling to make sense of society and its rules. Kevin falls in with a gang of would-be “international robbers,” a half-dozen raffish dwarves who worked at repairing flaws in the fabric of creation for the Supreme Being until they stole his map of the time holes that riddle reality. Alternately pursuing and pursued, Kevin follows the gang to the Napoleonic wars, medieval England, ancient Greece, and the Time of Legends, where the band is lured to the Fortress of Ultimate Darkness by the Evil One (David Warner), who wants the Creator’s map for his own nefarious purposes.

Nowadays casting a group of dwarf actors as a joke about their shortness would be at best tasteless, but it illustrates Gilliam’s theme that against the rule of arbitrary authority, adults have no more stature than children. In further justification, Randall (David Rappaport) and his gang are all fine character actors with more personality and definition than, say, the merrie men of Robin Hood (John Cleese), who are one-joke medieval brutes right out of Holy Grail or Jabberwocky.

Likewise, Napoleon (the ever-excellent Ian Holm) is no more to be admired or respected than Kevin’s gadget-greedy and materialistic parents or Cleese’s smarmy Robin Hood, but not all heroes are frauds: King Agamemnon (Sean Connery) is brave, kind, and just, the kind of wise and caring father denied to Kevin back in suburban reality. If there’s any hope for humanity, it’s in the like of Connery’s character.

So, Time Bandits is an exuberant visual romp, funny, fast-moving, and with at least a few ideas behind its roller-coaster ride — but is it a swashbuckler? Hey, it has Robin Hood, medieval knights, and a bronze-age duel with a minotaur, so I think we’re on solid ground for including it here. To top it off, who else would you cast as the Supreme Being if not Ralph Richardson? If you’ve somehow escaped seeing it before now, add this to your short list (er, no pun intended). 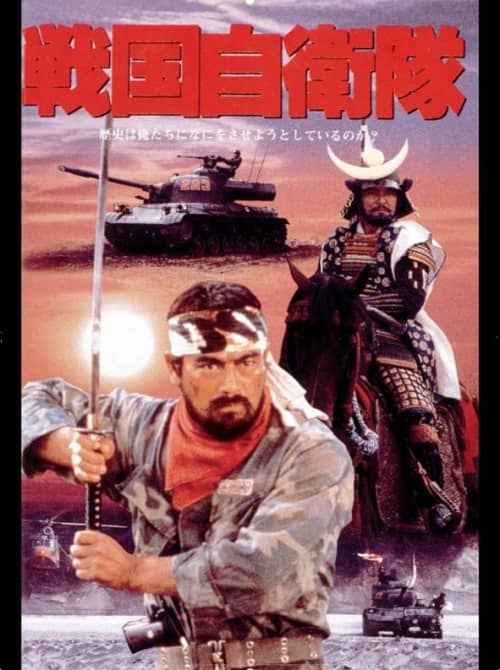 A small Japanese Defense Forces unit armed with modern weapons accidentally time travels back to the Warring States period, where samurai warriors kick their asses. But it takes the samurai well over two hours to do it.

There’s not much more to it than that. The JDF unit, two dozen men with a tank, a helicopter, a patrol boat, a halftrack, a jeep, a truck, and a whole lot of ammunition, endure cheap special effects as they find themselves transported to about 1561, and right into a conflict between warring daimyo. They immediately have to defend themselves against attacking samurai, because this is an action movie and nothing but.

However, the JDF commander, Yoshiaki Iba (Sonny Chiba), parleys with General Kagetora (Isao Natsuyagi), and the two immediately hit it off. After some shallow soul searching in between pointless action scenes, Iba decides to join Kagetora and try to conquer Japan, on the ostensible rationale that if his modern troops radically change history, history will somehow spit them out and send them back to their own era. It’s a questionable decision, but pretty much every decision made in this movie is questionable, so hey.

The samurai warriors look great, and a company of mounted samurai with a troop of ashigaru foot soldiers, sashimono back banners flapping, leading a 20th-century armored column across war-torn Japan makes a compelling and memorable image. But that’s it as far as compelling and memorable go for this film. Though Iba is excited about the challenge of finding himself in the 16th century, most of his soldiers are pretty bummed about it; the script goes out of its way to attempt to make them relatable, but the fact is, their stories are boring.

The Iba-Kagetora warrior bromance likewise goes nowhere, and the film just chugs along until it arrives at its reason for existence, the 40-minute set-piece battle pitting the JDF unit against the entire army of famed warlord Takeda Shingen at Kawanakajima (think samurai Gettysburg). The soldiers’ automatic weapons slaughter untold numbers of their opponents, but the samurai are fearless and inventive, and one by one they manage to take out the JDF vehicles and whittle down their number of soldiers.

Nonetheless, Lieutenant Iba, adept with both modern and ancient weaponry, manages to fight his way to Shingen’s headquarters, where he challenges the great general to personal combat. If Iba manages to kill Takeda Shingen and change history, will his troops be zapped back at last to their own time? 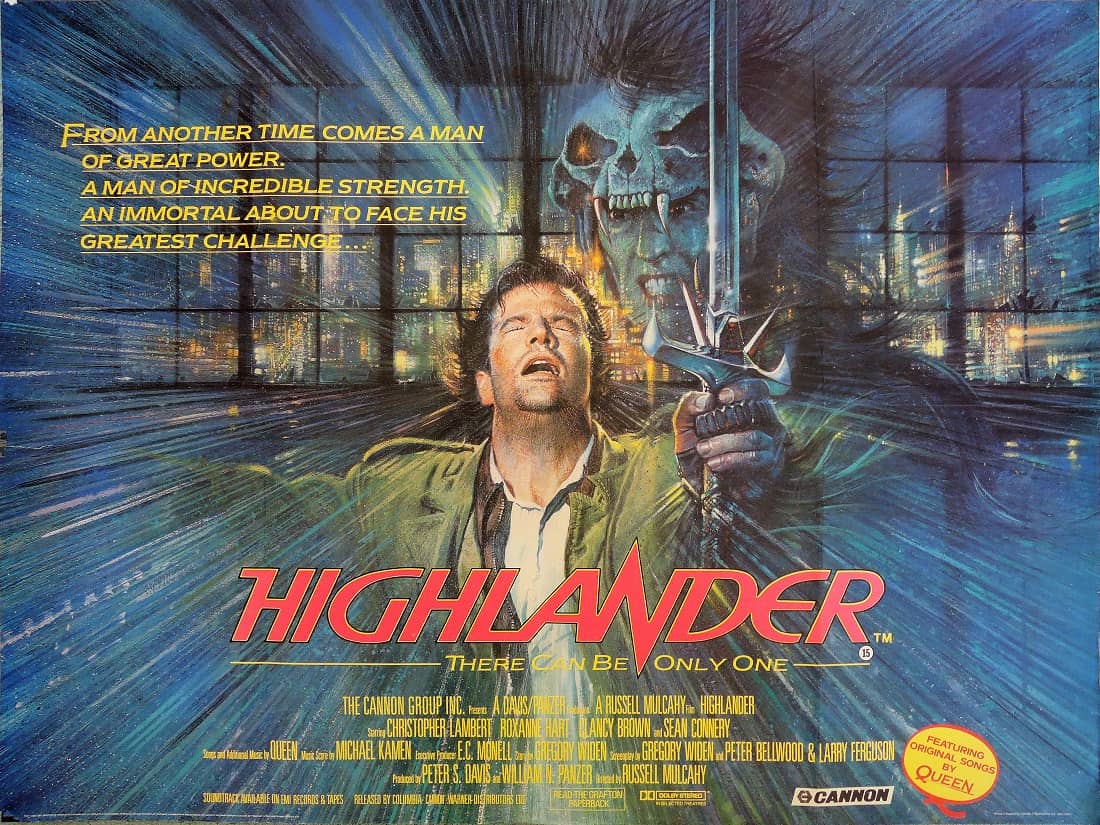 The story of this enormously entertaining action fantasy doesn’t bear close inspection, but it only takes itself seriously enough to keep you hanging on through the thrill ride. Director Russell Mulcahy made his name on music videos for early MTV, and his stylistic use of quick cuts and orbiting Steadicams, while standard now, was a revelation in 1986.

The story is set in Scotland in the 16th century and in New York City in 1985, cutting back and forth between the two. Highlander Connor MacLeod (Christopher Lambert) goes to battle with his clan mates where he faces a mysterious bone-clad knight called the Kurgan (Clancy Brown) who impales MacLeod with his broadsword. He’s rescued by his friends, but instead of killing him, MacLeod’s lethal wound heals overnight.

Accused of witchcraft and driven from his village, MacLeod, living alone but for his wife Heather (Beatie Edney), has no idea what this all means until he’s tracked down by an ebullient Spaniard, Ramírez (Sean Connery). Ramírez explains to MacLeod that he’s one of an elite group of immortals who live only to kill each other and absorb their extra-human energy in an event called “the Quickening.” The Spaniard trains MacLeod in swordplay to withstand the Kurgan, until one day their nemesis shows while MacLeod is away….

In 1985, in the current-day storyline, MacLeod, still alive after over four centuries, is attacked in a parking garage by Fasil (Peter Diamond), another immortal. After a furious sword-fight MacLeod beheads him, the only way an immortal can be slain, and absorbs his power. Then the cops arrive. MacLeod is arrested and released for lack of evidence, but he’s attracted the attention of forensic scientist Brenda Wyatt (Roxanne Hart), who also happens to be an expert on ancient swords and who finds Fasil’s exotic blade. Obsessed, Brenda tracks down MacLeod and they fall for each other, but the Kurgan tracks down MacLeod as well, because it’s finally time for the Gathering, when the last two immortals must fight to the death. (You know the meme: There Can Be Only One.)

This is solid silly fun, with scenery chewed by all concerned, because in addition to threats of decapitation there’s also the Angst of Doomed Romance. The exaggerated broadsword combats are not what you’d call historically authentic, but these immortals are not so much swordsmen as badass superheroes who happen to wield swords. This is just as well, because none of the actors are credible fencers except for Peter Diamond who, along with Bob Anderson, is responsible for choreographing the sword fights — the same team who performed that service for Star Wars.

And there are definite visual echoes of Return of the Jedi’s lightsaber battle in MacLeod and the Kurgan’s final clash, under a giant electric sign at night on a downtown rooftop, and then in a dark and empty warehouse below. However, watch this if only to savor Connery’s over-the-top performance as an Egypto-Spanish immortal with an inexhaustible lust for life and an impossibly anachronistic Japanese katana. You won’t be sorry.

Time Bandits is one of my all-time favorites, and every time I rewatch it, I’m impressed with the attention to detail — just about everything Kevin encounters can be traced back to some random book or toy or boardgame lying on the floor of his bedroom.

And Highlander is another stone classic, and I’m glad they never cheapened its legacy with a series of godawful sequels.

> I’m glad they never cheapened its legacy with a series of godawful sequels.

Wait, you mean THERE AREN’T ANY HIGHLANDER SEQUELS IN THIS TIMELINE? Wahoo! No, no, please let me stay, guys, PLEASE let me sta

Another Ellsworth’s Cinema of Swords? Timey-Wimey? Dear Lord, not another Dr. Who reference…oh, Thank Heavens.

Time Bandits and Highlander are classics that never disappoint but I’ve never even heard of G.I. Samurai. With Sonny Chiba no less. Sounds like it might be worth a look.

Thanks for a great post, Mr. Ellsworth. Once again you have found a lost treasure to share with us along with a couple of well-known gems.

Double Sean Connery action! Time Bandits is one of those movies that took a couple of viewings to grow on me, but grow on me it did and I’ve been a Gilliam fan ever since.

Highlander was incredibly awesome– one of those one-shot movies that you don’t expect much from and you get a lot! Like putting a quarter into a slot machine and winning a hundred bucks!