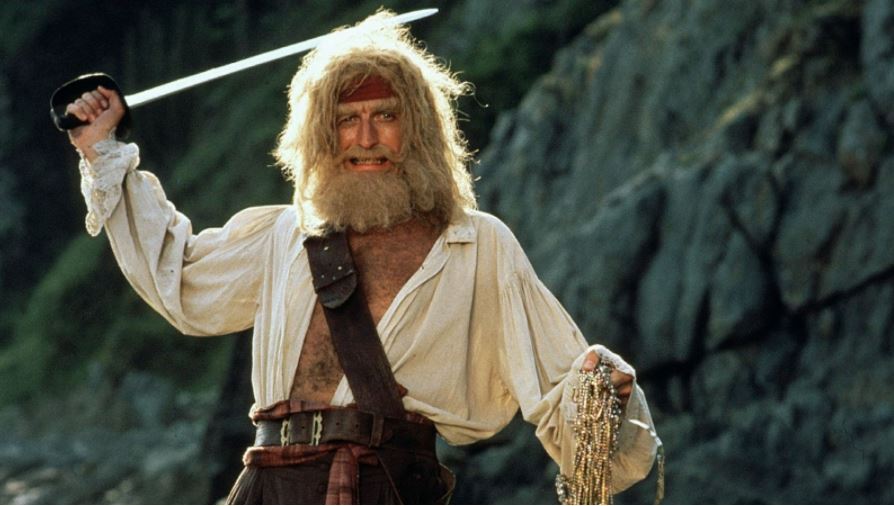 By the Eighties the once-thriving genre of pirate movies had been condemned and hung from the yardarm, and based upon the crimes against cinema of this week’s first two films, it’s easy to see why. The terrible Cutthroat Island would follow in 1995 to put the final nail in the genre’s coffin until it lurched from the grave for a surprise resurrection in 2003’s Pirates of the Caribbean.

But don’t lament too loudly, for if there’s one piratical scallywag not even ill-conceived and overblown cinematic hubris can catch and hang at Executioner’s Dock, it’s that unrepentant scoundrel Long John Silver. An’ ye can lay to that, matey!

This pirate comedy is a colossal disappointment. Comedy-by-committee can be quite successful — just look at Monty Python’s entire oeuvre — but it can also go badly wrong, which seems to be what happened here. The ensemble cast reads like a who’s-who of Seventies and Eighties comedy films: Graham Chapman, Peter Boyle, Madeline Kahn, Peter Cook, John Cleese, Michael Hordern, Eric Idle, plus Spike Milligan and Marty Feldman in their final roles — even Cheech and Chong, but the less said about them, the better. The romantic lead was played by the bland Martin Hewitt, after the part was originally written for Adam Ant and then Sting. “Sting should have had my part,” Hewitt later said. “For crying out loud, I would have hired Sting over me any day.”

But Sting was deemed “too British” for the American market, and US distributor Orion Pictures contributed to the script’s too-many-rewrites problem by insisting that the screenplay de-emphasize the plot and inflate the parts of all those bankable supporting actors. Bad call, Orion. Director Mel Damski had never made a feature film before and isn’t able here to summon order out of the chaos. Moreover, the ostensible lead role, Graham Chapman’s Yellowbeard, is a character with just one joke, which is that he’s irredeemably bloodthirsty and awful. Funny once, but not for 96 minutes. To top it off, there are a bunch of rape and torture gags that haven’t aged well at all.

The things Yellowbeard got right just emphasize what a huge missed opportunity it is. Even with rotten material, the actors are still frequently hilarious, and most of them are clearly enjoying themselves. The story, sort of an inverted Treasure Island, is a shambles, but it shows a real love for all the pirate tropes it’s taking down. The costumes and sets are fine, with a real three-masted ship for the sailing sequences, the vessel built for the 1962 Mutiny on the Bounty. And the exaggerated swordplay is funny even when the jokes aren’t. There’s even a comic walk-on by David Bowie. If only this thing had a coherent script, sharp direction, and Sting in a lead role, how great it could have been.

There are only three legit reasons for watching this woeful travesty: 1) You want to see every film in which the swordplay is choreographed by the great William Hobbs; 2) You are actually the director, Roman Polanski; or 3) You have been very, very naughty and feel you should be punished.

This film is a strong candidate for Worst Pirate Movie Ever Made. Its star, Walter Matthau as Cap’n Red, is shockingly miscast; his RP (Received Pirate) accent is dreadful, and he gargles half his words in the back of his throat so that he’s often unintelligible. The romantic leads, Cris Campion as Frog (because he’s French, ha-ha) and Charlotte Lewis as María-Dolores, are bland, uninteresting, and uninterested in each other. The antagonists, an assortment of nonentities as villainous Spanish dons, are paper-thin caricatures. The only actors who do anything whatsoever with their characters are Roy Kinnear as Dutch, a corrupt merchant, and Olu Jacobs as Boomako, an ex-slave piratical sidekick.

What serves as the story, fragmented folderol about a golden Aztec throne everyone wants, is excruciatingly slow, stupefyingly dull, and with an ending that’s even worse than everything that’s gone before it. It must be intended to be funny, but like the rest of the labored and tasteless attempts at humor in this film, it falls utterly flat.

This movie cost 40 million 1985 dollars to make and took in only $6 million in global receipts, making it one of the biggest theatrical flops in cinema history. You can certainly see where a lot of those millions went: the costumes are stellar, the sets are detailed and elaborate, and they built a gigantic Spanish galleon in Tunisia that must be just about the biggest sailing-ship prop every created. (If you’re ever in Genoa, Italy, it’s down at the docks and you can tour it for 9 euro.) The cinematography is flawless.

And there’s an eleven-minute joke about eating a boiled rat. It’s an apt metaphor for watching this thing. 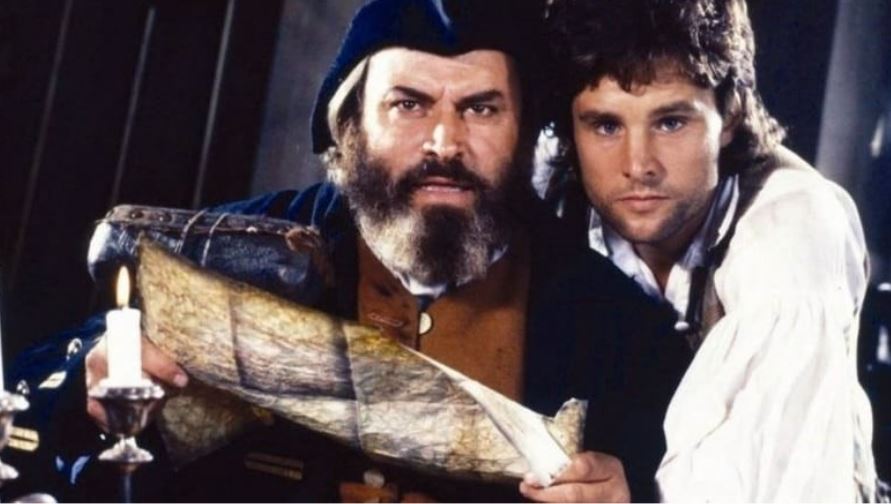 Robert Louis Stevenson never wrote a sequel to his most influential novel, Treasure Island (1883), but plenty of others have pitched in over time to fill that need, including Ivor Dean, who played Long John Silver in the popular 1966 German mini-series Die Schatzinsel (no English language version, alas). Dean died before he could make his Return to Treasure Island, but his carefully worked-out story was adapted by John Goldsmith into a screenplay for the Welsh HTV network, co-financed by Disney for broadcast on their cable channel. And we’re glad they did.

The result is a mini-series of ten 50-minute episodes that has many fine qualities, the chief of which is the casting of Brian Blessed as Silver. The best-remembered depiction of Silver is of course that of Robert Newton in the early Fifties, but Blessed’s performance comes in a close second. This is mainly because the larger-than-life role of Silver calls for a characterization that plays to Blessed’s strengths as a charismatic personality, but also requires him to rein in that charisma and be sly, for this version of Long John is a thoroughgoing rogue.

The second protagonist is the now fully grown Jim Hawkins (Christopher Guard), and he’s in a tough spot holding his own opposite Blessed. It isn’t easy to play a character who’s earnest, well-meaning, and forthright yet not a fool, but Guard manages it. And he has the good fortune to be opposed by two delightfully ruthless and despicable villains, English scoundrel Joshua Hallows (Donald Pickering) and Spanish slave-driver Superintendente Garcia (John Bennett). The rest of the cast does all right without particularly standing out, except for Kenneth Colley as Jim’s sidekick, the aging and addled Ben Gunn, whose repertoire of eccentricities rapidly becomes tiresome.

The story is set ten years after Treasure Island, when Jim Hawkins has just come home from Oxford (where I believe he took a First in cutlass fencing) to the Admiral Benbow Inn, just as John Silver reappears with some scurvy mates intent on taking possession of Captain Flint’s old treasure map. The pirates are captured, and then Squire Trelawney (Bruce Purchase) persuades Jim to sail to Jamaica to sort out disturbing reports from the squire’s plantation there — and when he sails, Silver, sentenced to transportation to the East Indies, sails with him. And you can bet he doesn’t stay in chains for long.

This mini-series is one long, continuous story, and though every episode has plenty of intrigue and action in it, most of it sharply directed, the tale is arguably too long and gets a trifle repetitive in the middle eps — Hawkins is framed for murder in Jamaica and has to flee, passes through a pirate haven and arrives in Mexico where he is once again framed for murder and has to flee. Ah, but that interim stop in the pirate haven, the Crow’s Nest, is one of the most authentic and convincing depictions of life under the black flag in a century of piracy on the screen, a precursor in tone to the Black Sails series of almost thirty years later. It’s surprising that the Disney company was involved with anything this dark.

Shot in Wales, Jamaica, and Spain (standing in for Mexico), the rest of the sets and settings are just as authentic and convincing, making a clear statement that you can create an exciting tale about Caribbean pirates without abandoning history and veering into fantasy. Special kudos for use of the gorgeous Danish three-master Kaskelot which takes the role, under different paint jobs, of several of the series’ ships. This is a top-notch production for a mini-series, by the pow’rs, and it’s a shame it isn’t better known outside the UK.

Another Ellsworth’s Cinema of Swords??? You ain’t kidding about those 2 wrecks!

I watched Yellowbeard once and haven’t been able to sit through it again. Pirates I avoided entirely out of principle (no Polanski) but I never knew that Brian Blessed portrayed Long John Silver on the silver screen. It seems a part perfect for him and I need to look this series up. I don’t know why I never saw it, but thanks for the tip!

I must have a tolerance for bad movies. Think my wife can support that statement:) Actually enjoyed both Pirates and Yellowbeard. “I may be bling,, but have acute ‘earing”,… Or Walter Matthau uttering “Roh (rot) in hell!” Hoping you cover Cutthroat Island sometime.

“This film is a strong candidate for Worst Pirate Movie Ever Made?”
Not, surely, while “The King’s Pirate” with Doug McClure still exists.