The series is edited by a different guest editor every year; Canadian author Helen Marshall is at the reins for 2017. The series editor is Undertow’s distinguished publisher, Michael Kelly. This year’s volume includes stories from Jeffrey Ford, Dale Bailey, Usman T. Malik, Sam J. Miller, Sarah Tolmie, Indrapramit Das, and many others. It arrived in trade paperback from Undertow Publications earlier this month.

And while we’re talking about the book, I have to say a few words about Alex Andreev’s fantastically creepy cover, which may be my favorite cover art of 2017. I’ve seen it multiple times, but didn’t notice anything particularly unsettling about it until I tracked down a high-res version for this article. Once you see it, you can’t unsee it. Click the image above left to view a high-resolution version, and see what I mean. Warning: not for the squeamish. (Which in this case definitely includes me. Brrrr.)

“I Was a Teenage Werewolf” by Dale Bailey (Nightmare #51)
“Breakdown” by Gary Budden (The Short Anthology: The Second Issue)
“The Signal Birds” by Octavia Cade (Liminal Stories #2)
“Breaking Water” by Indrapramit Das (Tor.com)
“The End of Hope Street” by Malcolm Devlin (Interzone #266)
“The Blameless” by Jeffrey Ford (A Natural History of Hell)
“Waxy” by Camilla Grudova (Granta Online)
“A Heavy Devotion” by Daisy Johnson (Fen)
“Red” by Katie Knoll (The Masters Review Online)
“In The Ruins of Mohenjo-Daro” by Usman T. Malik (The Mammoth Book of Cthulhu)
“Angel, Monster, Man” by Sam J. Miller (Nightmare #40)
“Outtakes” by Irenosen Okojie (Speak, Gigantular)
“Beating the Bounds” by Aki Schilz (The Unreliable Guide To London)
“The Kings With No Hands” by Johanna Sinisalo, translated by J. Robert Tupasela (Finnish Weird 3)
“The Dancer on the Stairs” by Sarah Tolmie (Two Travelers) 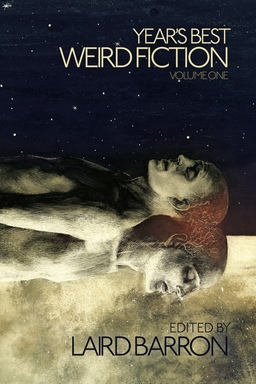 We covered the three previous volumes in the series here:

The most recent two volumes are still in print; Volume One is out of print and rapidly rising in price. If you see a copy in the wild, snap it up.

While we’re on the topic of Best of the Year volumes, here’s the ones we’ve covered so far in 2017:

Year’s Best Weird Fiction, Volume 4 was published by Undertow Publications on October 3, 2017. It is 362 pages, priced at $29.99 in hardcover and $19.99 in trade paperback. The spectacularly spooky cover is by Alex Andreev, with design by Vince Haig. Order copies straight from Undertow Publications.