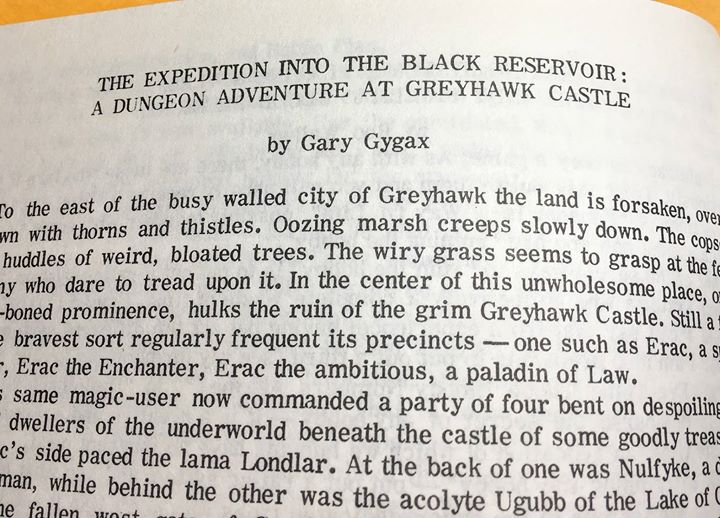 The early days of D&D have been chronicled many times, in Shannon Appelcline’s excellent Designers and Dragons books, Michael Witwer’s Empire of Imagination, David Kushner and Koren Shadmi’s Rise of the Dungeon Master: Gary Gygax and the Creation of D&D, and a rapidly growing corpus of gaming history texts. When an era you lived through in your teens now has its own shelf in the history section, you’re getting old.

Still, there are plenty of unchronicled tidbits of gaming history out there, and I stumbled on one this weekend. In 1974 Gary Gygax, strapped for marketing cash for his just-released adventure game Dungeons and Dragons, agreed to contribute two articles to issue 12 of El Conquistador, a Chicago small press magazine devoted to play-by-mail Diplomacy leagues and general wargaming, in exchange for a full-page D&D ad. The first article was “Postal Brotherhood,” a short piece on play-by-mail gaming, a pastime that was already dying (and was fully dead less than two decades later).

The second was vastly more interesting: a four-page story that’s believed to be the first Greyhawk tale ever published. 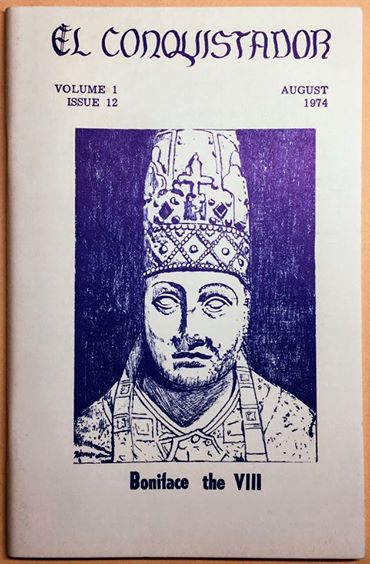 There’s been some good scholarship done on this story since it was first re-discovered in 2003 by Michael Badolato, who reported the details at the D&D historical archive The Acaeum.

The story appeared in the fanzine El Conquistador in 1975, and runs about four pages. The title is “The Expedition Into the Black Reservoir; A Dungeon Adventure At Greyhawk Castle” and was authenticated by Gary himself as being a story he wrote to promote the new game, Dungeons & Dragons, which is also advertised in the same issue. The issue also ran a review of D&D, along with another article by Gygax elaborating the idea and themes of D&D. This story has never been re-published, and as far as I know is perhaps the first ever Greyhawk-specific short story ever published. It is also very rare, having been published in a small-print run zine having to do with play by mail Diplomacy and wargaming campaigns. Gary said that he no longer has a copy either, having donated it to WOTC a few years back along with other personal items he had.

Badolato e-mailed Gary, who authenticated the find and provided some interesting detail. 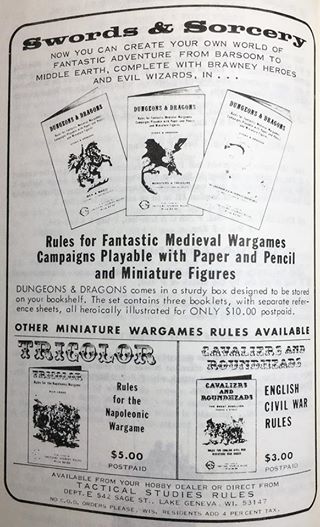 Badolato elaborated on the find in his e-mail messages.

It was published in a small print run magazine in 1975. The tale describes an adventure into Castle Greyhawk by Erac and his companions. It runs about 2000 words (4 pages) and I’ve never seen it reprinted anywhere… it’s more of an adventure description than a short story. It looks like it was penned to advertise the “new” Dungeons and Dragons game and the “Long awaited Greyhawk supplement” that is advertised in the issue as being available. There is also a short article… entitled “What is the Magic of Swords and Sorcery Wargaming?” in the same issue, a fun little snapshot of the hobby waaaaay back in 1975… 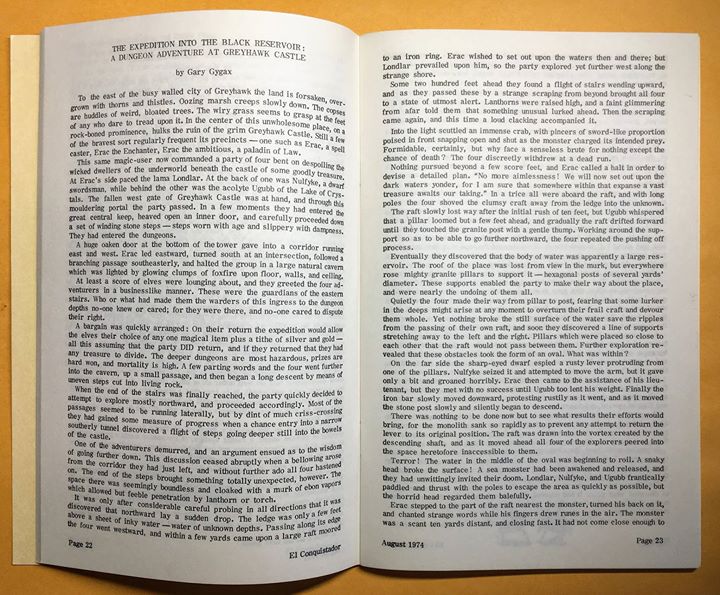 “The Expedition Into the Black Reservoir” by Gary Gygax

The story is based on the adventures of four players in Gygax’s famed Castle Greyhawk, Erac, Londlar, Nulfyke, and Ugubb. According to Gary, Erac was his son Ernie. Here’s a snippet of his response to Badolato.

Holy Mackeral! I’ve totally forgotten that essay, don’t even recall the name of the zine in which it was published:( Sure would like to read that again myself…

Likely I exchanged the articles for the ad. TSR didn’t have much available cash back then for sure… Erac was a PC of Ernie’s. I will have to ask him if he recalls the other names, who played those characters.

Gary’s article on PBM gaming in the same issue

As a work of fiction, “The Expedition Into the Black Reservoir” isn’t particularly memorable. But as a glimpse into Gygax’s early DM’ing style, and especially as a tantalizingly detailed look at the early days of Castle Greyhawk, perhaps the most famous RPG dungeon ever created, it’s a very significant find.

Copies of El Conquistador #12 are exceedingly hard to find. I’ve never encountered one, and in fact I came across these pictures at an online auction (in the RPG Lobby of Facebook) which is currently at $350. Well outside my price range. 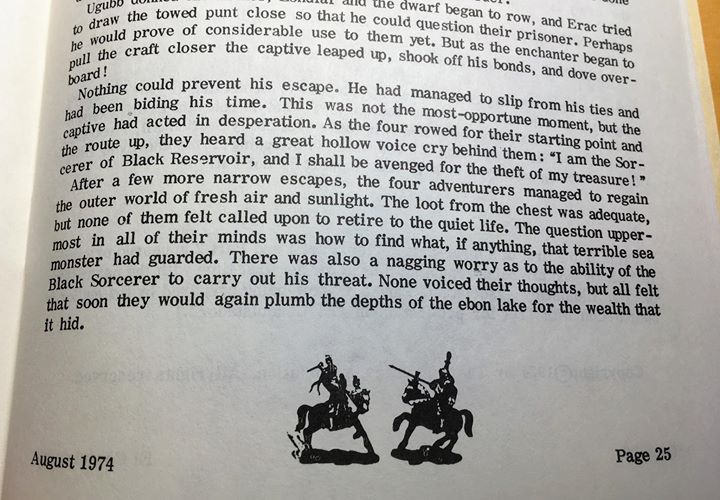 But those of us just interested in reading the story are in luck — you can read the entire thing at Greyhawk Online.

“When an era you lived through in your teens now has its own shelf in the history section, you’re getting old.”

So true. Try lecturing to college freshmen on a daily basis and having them give you bewildered looks when you mention ancient technology like “cassette tapes” or “dial phone”!

Awesome find, John! That came out in the year of my birth. Pretty awesome to see D&D’s inception and to think in comparison about how obsessed with D&D I am these days, just like I was back in the 80s. Too bad someone can’t put out a reprint of the zine or at least Gygax’s contributions.

Also, PBM gaming isn’t dead, it’s just ultra-niche. I am currently in two Hyborian War games by Reality Simulations, Inc. (see http://www.reality.com/). I’ve been playing Hyborian War since 2012 but originally played it back in the 80s when I was a kid. There is a lively forum dedicated to it at Road of Kings (https://www.warbarron.com/rok/index.php) but you will need an account to access the forums. Organized games (run with all Road of Kings members) are always looking for new players. How about it, John? Flying Buffalo also runs PBM games.

And James, I’m also a college professor and am usually delighted to see how much my students know. They continually get stereotyped as being clueless about the past, but that’s not been my experience. They have parents and grandparents. They watch older movies and TV. They get interested in earlier eras just like I do. Your punk and metal students (increasingly rare at my school but still around) know a lot about different media like cassette tapes or vinyl because punk and metal bands still release music that way.

“They continually get stereotyped as being clueless about the past, but that’s not been my experience.”

Though I wouldn’t characterize my students as “clueless about the past,” it has been my experience that they seem very ignorant of past technologies. Example: I asked my class the other day if they knew what a “dial-up internet connection” was. No one knew.

James, I’ll check with my Intro Psych students tomorrow if they know what a “dial-up internet connection” is. They haven’t failed me when I’ve asked them about rotary telephones and they easily could tell me what the “save” icon was in something like Microsoft Word.

I bet they wouldn’t know what Play-by-Mail was but neither would lots of people that read Black Gate. But like “dial-up internet” there are still people who play PBM. Still hard to play a single TURN-BASED game with 30+ people other than PBM.

Oops! Only now did I see the link to the Castle Greyhawk story in full. Will read shortly.

Hyborian War is very tempting! I checked out the Reality Simulations website, and it looks exactly like the kind of obsession I could spend a lot of hours on.

Given the state of my to-do list it’s probably a bad idea, but I will definitely investigate it this weekend.

James, I forgot to ask my first Intro Psych class this morning but in my second Intro PSYCH class roughly 3/4 of the class raised their hands when I asked who knew what “dial-up” internet was. And some of them talked about how slow it was, so they had direct experience. These are primarily trad college age students (and in Intro PSYCH that means they are mostly 18 years old, so born around 1999). Maybe part of the difference that we’re getting is that I teach at a regional comprehensive state university in a mostly rural part of the country (we’re located in a small city of roughly 40,000 when you include the surrounding towns). Rural areas still have problems with broadband internet availability. Are you teaching in a large city?

John, if it helps you make a decision about Hyborian War, you could play in just one slow game. You only get one turn a month in a slow game so it’s easier to keep up on. Although expect the game to take 2 1/2 years to complete if you stick it out from the start to the finish. In regular games, turns come twice a month. It takes me about an hour to complete my turns for a game. Starting new, it will probably take you a little longer until you learn the order options and codes. Also, RSI will accept turn orders via email, but only mail out turn results. There are some on the Road of Kings forum that wish RSI upgraded their systems to allow for web results, but there are others that really like the old-school paper and mail feel to the game. Getting turns in the mail certainly gives a level of excitement that is hard to beat.

If you decide to sign up for a game, I would recommend that you join the Road of Kings forum because the people there are always willing to help out a newbie. And feel free to send me an email if you have any questions. Also, it usually takes a few months for a game to start from the time you put in your request to RSI and submit your first turn orders.

I teach in Minneapolis, and in Columbus, OH before that. I guess you just attract smarter students.

[…] (Black Gate) The Expedition Into the Black Reservoir: A Dungeon Adventure at Greyhawk Castle by Gary Gygax — “The story appeared in the fanzine El Conquistador in 1975, and runs about four […]

[…] (Black Gate) The Expedition Into the Black Reservoir: A Dungeon Adventure at Greyhawk Castle by Gary Gygax — “The story appeared in the fanzine El Conquistador in 1975, and runs about four […]