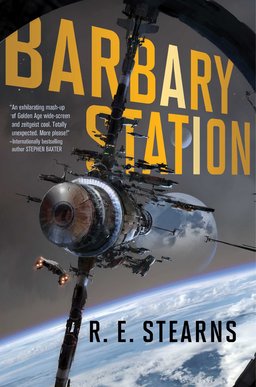 Pirates, space stations, and a killer A.I… these are the promising ingredients in R. E. Stearns’ debut SF novel Barbary Station, in which two engineers hijack a spaceship to join a band of space pirates — only to discover the pirates are hiding from a malevolent AI. To join the pirate crew, they first have to prove themselves by outwitting the AI… how hard can that be? Barbary Station arrives in hardcover from Saga Press on Halloween.

Adda and Iridian are newly minted engineers, but aren’t able to find any work in a solar system ruined by economic collapse after an interplanetary war. Desperate for employment, they hijack a colony ship and plan to join a famed pirate crew living in luxury at Barbary Station, an abandoned shipbreaking station in deep space.

But when they arrive there, nothing is as expected. The pirates aren’t living in luxury — they’re hiding in a makeshift base welded onto the station’s exterior hull. The artificial intelligence controlling the station’s security system has gone mad, trying to kill all station residents and shooting down any ship that attempts to leave — so there’s no way out.

Adda and Iridian have one chance to earn a place on the pirate crew: destroy the artificial intelligence. The last engineer who went up against the AI met an untimely end, and the pirates are taking bets on how the newcomers will die. But Adda and Iridian plan to beat the odds.

There’s a glorious future in piracy… if only they can survive long enough.

See all our recent coverage of the best upcoming SF ans Fantasy here.