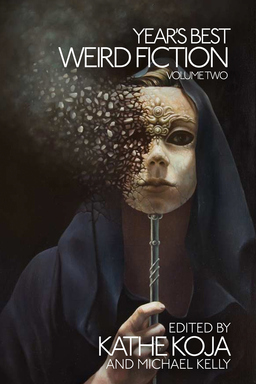 The first volume of Year’s Best Weird Fiction looks like it has been an unqualified success.

In his review, James McGlothlin wrote:

We are long overdue to have a year’s best anthology dedicated specifically to the weird… The craft of fine writing is quite exemplar here… Barron has successfully compiled an excellent anthology.

Now Undertow Books has revealed the cover and the complete Table of Contents for Year’s Best Weird Fiction Volume Two, to be published later this year. Here’s the TOC:

Year’s Best Weird Fiction Volume Two, edited by Kathe Koja and Michael Kelly, will be published by Undertow Books, a division of ChiZine Publications. I couldn’t find an official pub date, but when I have one, so will you.

So what’s Michael Jackson doing on that book cover?

Given that this series will have a different editor every year, it’s difficult to predict what they’ll be like. Koja can write some really creepy stuff; so I bet she’ll be an excellent editor for the weird.

[…] second volume, and I’m not the only one. The one is edited by Kelly and Kathe Koja, and the Table of Contents looks just as stellar. According to publisher Undertow Publications, it will be available on […]