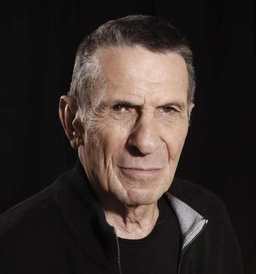 Leonard Nimoy, the gifted actor who breathed life into the emotionless Vulcan Spock — and in the process created one of the most famous and enduring TV characters of all time — died today in Bel Air, California.

Nimoy was the only actor to appear in every episode of the original Star Trek series, which ran from 1966-69. He received three Emmy Award nominations for playing Spock, and TV Guide named him one of the 50 greatest TV characters in 2009. The role both haunted him and enriched for the rest of his life — which he famously addressed in two autobiographies, I Am Not Spock (1975) and I Am Spock (1995). After Star Trek ended Nimoy found regular work on the small screen in Mission: Impossible for two seasons, the TV documentary In Search of… , and more recently in Fringe. He also appeared in eight feature-length Star Trek films, including the recent reboots directed by J.J. Abrams. He directed two, Star Trek III: Search for Spock and Star Trek IV: The Voyage Home.

Star Trek was one of the first science fiction shows to be taken seriously as adult entertainment, and Leonard Nimoy was a huge part of that success. In his near-perfect portrayal of a hero in flawless control of his emotions, Nimoy connected with his audience — and an entire generation of young SF fans — in a way that very few actors, living or dead, have succeeded in doing. Leonard Nimoy died today of chronic obstructive pulmonary disease, at the age of 83.

For “geeks” of a certain age, this is like the loss of one of the Beatles. Great as Shatner was at his best, time and again it was Nimoy’s portrayal of Spock that elevated Star Trek to a different, unprecedented level.

Rest in Peace and Logic, Leonard…

He had a long, full life and was still very active right till the end. I recently got the DVD box set for “In Search Of” – if you don’t know that show imagine “Ancient Aliens” is a pale and limited echo of an earlier greater show that Mr Spock hosted… To me that was “Mr Spock” as much as the “Star Trek”. When I was really young I went “So Captain Kirk left space and is a cop on earth?” (T.J. Hooker) but “Mr. Spock” was opening/warping my young mind to all the hidden, occult stuff going on in the real world and might be real vs the fiction easy space travel was being rammed into us at the time.

I was hoping they’d do another re-try of In Search of (KEEP the crazy music, even a modern synth has all that ‘retro’ synth effects) with him in like a Hyperbaric chamber rambling on a narrative…

But I will miss him and loved what he did.

As a younger fan who over the past two years watched all of the Original Series episodes and movies, this is sad…

Spock broadened science fiction characters and how we look at aliens. There have been several Vulcans in the series but no actor captured the essence of Vulcans like Spock. He was more Vulcan than Vulcans and more human than humans. That was drawn out through Nimoy’s talent as an actor. I think Spock paved the way for future non human characters to be multi dimensional, although alien, and made it possible for them to be central and favored characters. No single alien character stands out in my mind prior to Spock. Had Nimoy been flat in his portrayal as Spock I don’t know if science fiction would be as advanced in that concept today as most aliens were cute fuzzy companions and not equals (Chewbacca comes to mind). Would Yoda have been as effective? Would the aliens of Babylon Five been as acceptable? Would a series like Far Scape have been as welcomed?

Nimoy was a likeable person and a terrific embassador for science fiction. When I was a kid science fiction was not mainstream like it is today. It took many successes but Nimoy did a lot to advance the genre.

I learned a little bit more about his life when I read his obituary. I found out that he frequently added LLAP to his tweets and writings (live long and prosper). He was also in the Army and I never knew he was a vet.

I knew a guy in his youth who was a bit of a bigot and yet he was a big Star Trek fan. He was shocked to discover that Nimoy and Shatner were both Jewish and he reassessed his thinking. Years later when I saw him again I discovered that he had Jewish friends and his views had radically reversed. How can anyone not like Nimoy? If you think about Nimoy’s character and couple it with his portrayal of Spock I wonder how many hearts he changed by being a good person. Star Trek theme was always about appealing to mankind’s noble values. Nimoy did a lot on stage and in his personal life to advance those enlightened thoughts. How many people did he touch and change for the better?

In his book, “I Am Not Spock” he talked about who he was as a person beyond the Star Trek series. At the end of the book I liked knowing more about the man who played the part of Spock, but Nimoy really was Spock. He was a good, respectable man.

As Thomas Parker said above, this was a big loss to those of us who grew up with him.

Very sad. Agree he was an ambassador for science fiction as Spock and such a talented actor. Even non Sci Fi fans and/or non trekkies I speak to are saddened by the news which just goes to show what an icon he was.

Very true. As a kid, watching the early episodes of STAR TREK, I totally took Nimoy’s performance for granted (I think maybe that’s what great acting does – make it look easy.) But I’ve seen enough lukewarm performances of Vulcans — and other aliens — since to realize just how many ways Spock could have been portrayed badly in the hands of anyone other than Nimoy. As you say, if he had been played flat, Star Trek would not have had half the warmth that the series does, even today.

I watched Star Trek IV last night with my family, as a tribute to Nimoy. There are scenes in that film that are comic genius (as when Spock insists he does not like Italian food, or tells Kirk, “Just a damn minute admiral” as he’s finishing his computations), but Nimoy never breaks character.

How did he bring such warmth and humanity to an alien character? I’ve watched him do it countless times, and I still don’t really understand how he did it.

[…] heard about many different ways that Star Trek fans have paid tribute to Leonard Nimoy over the last two weeks. For me, it was by watching Star Trek IV: The Voyage Home with my family. […]