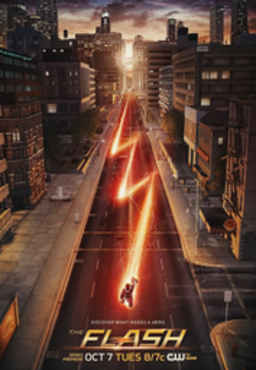 This series on superheroes was started by Derek Künsken when he chatted Supergirl! Check it out!

There are times in each of our lives when we don’t feel like embracing that darkness on TV. When we’re tired of murder and drama and stoic heroes with perfect cleft chins (scratch that last one, actually. I couldn’t get tired of that).

Sometimes, life is dark enough (loss of loved one, running out of ice cream, losing a toe, etc.) that we want to just watch something fun. We want to watch stories that both fulfill the need for heroic action while letting us have some bloody fun. We want to escape in our TV sets. (Not à la Poltergeist, mind you.)

I love heroes. I’ve loved them since I was a non-speaking English kid and thought He-Man and She-Ra were married (theirs would have been very sturdy children). I also have a soft spot for superheroes. I’ve binge watched way too many superhero episodes on Netflix so far.

My latest binge was The Flash. I hadn’t checked out The Flash yet because of Arrow. If there was to be one more flashback scene and stern, misunderstood look, I thought I’d rip my right ear off and toss it at Stephen Amell’s screen projected hotness.

But I’ve always loved The Flash. He’s the funny guy, the one who brings some light and levity to the Justice League, the one with the silly genes underlined with some fine acts of heroism.

So I was worried that they’d do to him like they’d done to Green Arrow — leather-clad him and throw him in a dark storyline. Gone would be the jokes and fun (remember when Green Arrow had personality and wasn’t just a hot guy?)

BUT, I (bravely) decided to try The Flash after everyone told me it was worth it. I was ready to call everyone on it, too. Thank goodness I didn’t have to (it would have taken a lot of time)! The new Flash series is fun. It’s quirky. It reminds us how cool superheroes are.

By the end of the first episode, I was hooting and hollering at the TV because I was having fun. I wasn’t having a great revelation on how island living sucks, nor was I pondering the futility of human existence. I was just enjoying the ride.

Thomas Grant Gustin embodies the fun and caring of The Flash perfectly. He’s excited to help others. He’s scared, too. And he likes running around like a demented lightning storm on too much caffeine. Setbacks are mostly just setbacks. He doesn’t question his existence and purpose in every episode. And the villains actually look like villains — sometimes scary, sometimes downright silly.

This show reminds me of why young me enjoyed comic books so much: the quirkiness, the unexpected, the sheer fun of being super and the belief that saving that one random person can make all the difference.

The Flash and Arrow crossovers have also made me want to give that show another try, too. Because Oliver is better with Barry around.

My wife and I don’t have a lot of crossover when it comes to stuff we both enjoy watching on tv. Somehow superhero moves/shows have filled that gap.

We just finished the first season of The Flash about a month ago and we see almost every Marvel movie in theaters together. We both enjoyed Deadpool as well.

I’ve always loved this character, he really seems to be having fun. I liked the earlier series, and using the same actor to play Barry’s father as played the Flash in the earlier series was a lot of fun for me.

Evidently my buddy on Twitter got shadowbanned and tweeted this and Derek’s post but it went no where or was delayed.