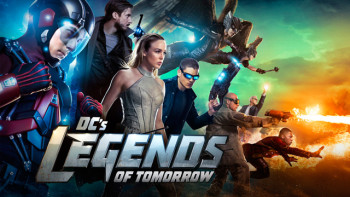 In the finest tradition of superhero cross-overs, Black Gate is doing a blog cross-over (collect them all, including the foil cover variants!). In Part I, I talked about Supergirl.

In Part II, Marie Bilodeau waxed eloquent about The Flash. Our cross-over continued with Part III by John O’Neill talking about Gotham, which led to an exciting cliffhanger in Part IV when Violette Malan covered Agent Carter and then made a daring escape by flying off to Spain!

Some of these blog posts are sure to become collector’s items, so check them out now!

Welcome to Part V of this Black Gate blog cross-over, where I take a weird look at DC’s Legends of Tomorrow.  I say weird because I have two strong feelings about this show, and I’ll use those feelings to structure this post.

The first feeling is, I wouldn’t watch this show on my own. The second feeling is that my 11-year old son and I never miss an episode.

But first of all, what is it? (You can check out a trailer here.)  A big draw of DC’s Legends of Tomorrow is that it has a big cast. Rip Hunter, a Time Master, has his family killed in the future by the near-immortal Vandal Savage. So, against the wishes of the other Time Masters, he steals a time ship and goes to 2016 to recruit some “legends.”

He picks Hawkman and Hawkgirl, the two human pieces of Firestorm the Nuclear Man, Ray Palmer who is the Atom, the Black Canary from Arrow, as well as two Flash villains: Heatwave and Captain Cold. Their job? Go through time to stop Vandal Savage from destroying most of the future.

So why wouldn’t I watch this show on my own?

Emotionally, the story is not that compelling. The same people who made The Flash and Arrow very emotional shows haven’t been able to hit that mark with this one and I think the reason is that the cast is too big.

There’s no time for us to actually see Rip Hunter grieving (or emoting at all), or to get into the trauma that the Hawks must be going through on their 206th resurrection, or the soul-wrenching conflict in Canary as the recovering assassin. Those things have tiny nods, but not enough to get engaged.

As well, Vandal Savage as a villain is zero-dimensional. He appears to be bad because he’s bad and he wants to ruin the future to make humanity stronger, whatever that means.

He also got a bad on for the Hawks and has killed them 206 times but this obsession is very thinly drawn and even combined with his “let’s make humanity stronger” goal, it doesn’t seem to add up believably to drive him to the kind of global genocide he’s pursuing. I mean, couldn’t he take up hedonism or lawn bowling or something?

The one saving emotional core of this series so far is thieving Captain Cold and Heatwave. Cold’s performance is hypnotic and he’s a scene stealer all the time with one-liners such as “Let’s go stretch our legs in that bank we just saw.” Cold is a brilliant creation, and along with the ex-assassin Canary, saves the show, while making most people around him look predictable, especially the milquetoast Atom, who could not be more of a mama’s boy.

Sounds bad, so far, right? Well, not really. The golden age of science fiction is 8 years old to 12 years old and my son is 11. We never miss this show and I get to see it through his eyes. What do I see?

We go through time. Say it with me. They go through time and see the 1970s (and hilariously, a young lothario Dr. Stein who is very different from the older buttoned-down one half of Firestorm in the present). We visit a Soviet gulag in 1986 where Cold makes with the romance and the Atom hits a guy’s fist with his face, over and over. We also see 2046, with a ravaged Starling City, a new Green Arrow and a one-armed Oliver Queen. There is no end of fun to going through time.

Not only do we go through time, but they mess it up. Hunter’s time ship is capable of showing scenes from the future (à la Marty McFly’s family photo from Back to the Future). And they continue to mess up the future and the present with grandfather paradoxes and timeline shifts. Even their own departure from the present has some consequences for the future, so this is fun to follow.

And the DC universe is vast and this show shows it. Vandal Savage is an old Earth-2 villain who fought the Justice Society way back when. Rip Hunter is a silver age of DC scifi hero. The Canary’s mythos pulls in the League of Assassins. The Hawks bring in 4,000 years of human history. This is a large canvas and my son and I end up discussing the DC universe on the way to school.

My son *loves* Heatwave and Captain Cold. He laughs at their trash talk, repeats their most outrageous lines and generally goes anywhere in the story these two ne’er-do-wells go with their thieving morality and naked opportunism. And we’re both wondering what they’ll steal next.

So, is this a show worth watching? If you’re got a kid in the golden age of science fiction, I’d say grab them, make some popcorn and enjoy together. This is popcorn TV and there’s a time and place for popcorn. So enjoy.

If you’re looking for something more emotionally gripping with personal stakes, you’re probably more in the market for Supergirl or The Flash. If you want something more sophisticated, you should be watching Arrow or Agent Carter.

Let us know what you think! And stay tuned for the next parts in the giant Black Gate cross-over when we discuss Superhero TV like Daredevil, Arrow, Jessica Jones and more!

Derek Künsken writes science fiction and fantasy in Gatineau, Québec. He tweets from @derekkunsken and has an upcoming novelette in Asimov’s Science Fiction Magazine.

It is probably my least favorite of the Berlianti productions, though I still like it for the most part. I disagree with your reasoning about why it’s not as good as Arrow or The Flash however.

If anything, I think it does a better job at displaying realistic human interaction—sometimes much better. It’s probably the CW effect, as I call it, but human interactions on Arrow and The Flash can be grating at best. (And yes, Legends is also on the CW, but seems to be a much less CWesque show so far.)

I also disagree about the likability of The Atom. Not every interesting character has to be hard-edged or dangerous. He was used on Arrow largely for humor, and that’s mostly continuing here. That said, his character isn’t as funny as Captain Cold, and I think we both agree that Cold is one of the better characters. (Although I’m not finding his dialogue quite as sparkling as I did when he was a Flash villain.)

I also like the White Canary, although I can’t entirely separate that from the fact that I find the actress portraying her very beautiful (that chin cleft and spray of freckles across her face…). And they aren’t making her have that perpetual pout she had when she was first introduced in the flashback scenes on Arrow.

For me, and you did allude to it, the problem is the villain. I’ll admit, I have a very high standard for finding villains interesting at all: Scorpius from Farscape; some iterations of Fantastic Four villain Dr. Doom; Rumplestiltskin/Mr. Gold from Once Upon a Time, at least in the earlier seasons; Spider-man and Daredevil villain Kingpin. In other words, I like villains with vulnerabilities whose characters sometimes make you root for them or who have the possibility of growth. Vandal Savage is horrible as a villain. He’s too powerful, his motivations are annoying at best if not utterly ridiculous, and worst of all, he’s the only villain they have, episode after episode.

Finally, I also don’t find the Time Masters coming after them to be at all interesting. It’s just another variation on the trope of the police chief holding back the cop/detective from doing their job. It’s boring, it’s overdone, and if I never see that trope again I will not miss it.

I haven’t even heard of this show. This day and age is like a dream come true for a comic fan. Thanks Derek!