We seem to be in a new Golden Age of superhero television. It’s been so long that I can’t even remember the last one…. the early 80s, maybe, when Bill Bixby and William Katt (as The Incredible Hulk and The Greatest American Hero, respectively) dominated airwaves? Could be, but record-keeping was scattered in that long-ago time, and no one alive today remembers that far back.

But there’s ample evidence we’re in a new Golden Age. It’s a pretty simple yardstick, really. If you can count the number of really great superhero TV shows on more than two fingers, it’s probably a Golden Age (again, no one is exactly certain, because we’re not sure it’s ever happened before). These days, it’s hard to shake a stick at all the big-budget, highly acclaimed superhero drama on the small screen. There’s the brilliant Daredevil and Jessica Jones, both on Netflix, which have elevated adult action shows to high art. There’s Arrow and Legends of Tomorrow and Joss Whedon’s Agents of S.H.I.E.L.D., which started slow but became must-watch-television by the second season.

Derek Kunsken and Marie Bilodeau kicked off Black Gate‘s survey of our favorite Superhero TV shows last week; Derek opened with a look at ABC’s Supergirl, and Marie followed with The CW’s The Flash. But for my money, the most successful superhero TV show on the airwaves at the moment doesn’t even have any superheroes in it: Fox’s marvelous exploration of the greatest city in comics, Gotham. 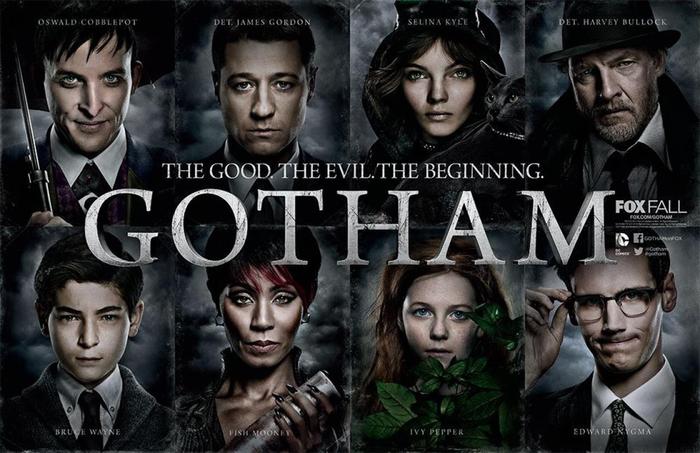 Gotham has a brilliant premise: it’s a gritty police procedural set in the dark metropolis that will birth the most colorful rogue’s gallery in modern literature. It’s the future home of the Joker, Catwoman, the Penguin, the Riddler, Two Face, Poison Ivy, the Scarecrow, Hugo Strange, and of course, Bruce Wayne, the Batman…. all of whom show up, albeit in younger guises.

Gotham is not yet the beleaguered city it will become, constantly beset by diabolical plots that threaten its very existence, but it has already begun its decent towards that dark future. Already it is thoroughly corrupt, and already it has an unusually high rate of strange and violent crime.

And the men who investigate these bizarre crimes? None other than a young detective named James Gordon, fresh from the academy, and his cynical and world-weary partner, Harvey Bullock. Their first case? The brutal murder of Thomas and Martha Wayne in a dark alley. The only witness to the crime is their traumatized young son, Bruce… and a young thief named Selina Kyle, hiding in the shadows.

The show accelerates from there, following Gordon as he pursues the clues into the corrupt underbelly of Gotham, quickly uncovering its true power brokers — the city’s mafia families. The show also follows Bruce Wayne as he attempts to make sense of his parents’ death, and sniff out the strange happenings at Wayne Enterprises that may or may not have had something to do with it. And it also follows the meek but resourceful Oswald Cobblepot, aka the Penguin — low level thug for crime boss Fish Mooney — whose uncanny ability to see which way the winds are blowing, and his unbridled ambition, aid in his rapid ascent in Gotham’s crime syndicates.

Typical for a show with a large ensemble cast, none of these storylines really dominates the others. But if the show has a center, it’s Gordon and Bullock, who are usually in the middle of the action. Gordon is a true hero, standing up to corruption even when the odds are hopeless. In fact, the young James Gordon, future Police Commissioner and friend to Batman, is often portrayed as just a little bit pigheaded, stubbornly insisting on open defiance when a more subtle and nuanced resistance to the entrenched forces of corruption is clearly called for.

This is where Harvey Bullock comes in. Bullock, a corrupt cop with sharp instincts, sees things that Gordon doesn’t. He doesn’t want to make waves, and has no interest in being drawn into Gordon’s idealistic crusade. He’s a man who’s compromised virtually every one of his ideals to survive… all but one. He’s loyal to a fault, and his loyalty to Gordon comes to cost him dearly. But it also brings him a renewed measure of faith in the system. Bullock and Gordon, the seasoned cynic and the uncompromising idealist, are a matched pair, and neither could succeed without the other. Together they’re a force to be reckoned with, and they shake up Gotham’s crime families in a major way by the end of the first season. 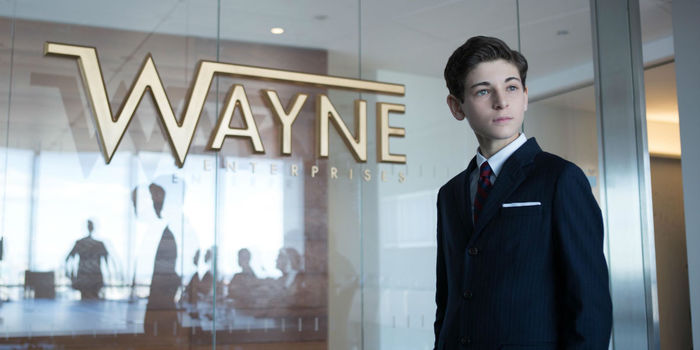 If Gotham were just a police procedural, with Gordon and Bullock solving bizarre crimes every week, it would probably be interesting enough. But the show’s creators, including Bruno Heller (whose previous creations include HBO’s Rome, and The Mentalist) and Danny Cannon, are much more ambitious than that. Heller and his writers are far more interested in exploring the origin stories of Batman’s classic villains than giving viewers neatly packaged mysteries every week, and the result is much more compelling. The show pretty much abandons the mystery-of-the-week formula standard for most cop shows in favor of far more complex storylines. Few (if any) episodes wrap up neatly, and plenty of crimes are left unsolved.

One word of warning: I binge-watched the entire first season on DVD over the course of about 10 days. If you’re going to drop into this show mid-season and try and figure it out from just a few episodes, God help you. There are a few jumping-on points (and, as is the case for most superhero dramas, the learning curve is a lot less steep for fans of the comics), but in general this is a show that pretty much expects you to be paying attention from episode one.

In fact, let me say a few words to Batman fans. You may come to the show, as I did, expecting the source material to be heavily massaged for TV — as it has been, say, for Arrow or Agents of S.H.I.E.L.D. But with Gotham, the creators have a very big plus right out of the gate: most of their audience is already passingly familiar with the Batman canon. (Is there anybody in North America that doesn’t know Bruce Wayne’s parents were killed when he was young? Or who Commissioner Gordon is?) 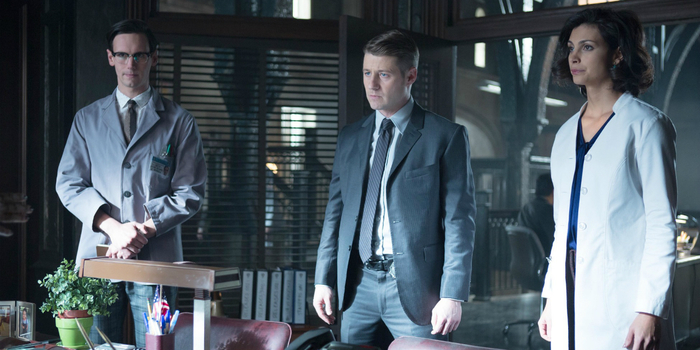 The result of our familiarity with the source material is that the viewer knows more — often much more — than the characters do. We know, for example, that Edward Nygma, the quirky forensic scientist with an obsession with riddles who works for Gotham City PD, will one day become the deadly psychopath known as The Riddler. So every time we see the brilliant but shy Nygma flinch at the naked scorn from his co-workers, we see him take one step closer towards his dark fate.

In fact, the more you know about the history of Batman, the more of this kind of thing there is to see. Every eposide is filled with little tidbits for long-time comic readers to delight in and chew over. For those who can spot the first (and frequently subtle) on-stage appearance of the Joker, the Riddler, Two Face, Poison Ivy, the Scarecrow, and others, there’s more than just an additional thrill… there’s a palpable aura of approaching doom over the entire proceedings.

Another masterstroke on the part of the show’s creators is Gotham‘s historical setting. It doesn’t have one. Rather than explicitly inform viewers of the date, the series is instead set in a timeless urban past. All the cars (and much of the clothing) are from the late 70s. There are cell phones, but no smart phones. Computers seem to run some primitive version of DOS. There’s advanced science in the show, but it all comes attached to huge machines that give off sparks, or cumbersome power packs. It’s an odd mix of industrial steampunk and 70s-era Brooklyn, and somehow it works. The city of Gotham isn’t just disconnected from reality by geography; it’s unmoored in time as well, and that gives the stories a rough-and-tumble noir edge. 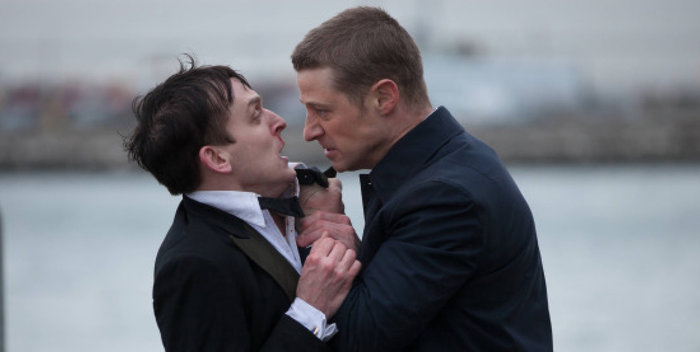 While individual episodes may not wrap up neatly, that’s not true of the first season. In fact, Season One of Gotham is one of the most satisfying pieces of TV cinema I’ve watched in some time. Multiple connected story arcs come together in the final two episodes in a terrifically orchestrated climax.

That’s not to say the writers have left us nothing to anticipate in Season Two, currently airing now on Fox. Season Two, titled Rise of the Villains, began airing last September, and it looks very appealing indeed. There are plenty of story threads that I’m highly looking forward to picking up again.

As I mentioned in the comments to the Supergirl post, my wife and I are with you as far as Gotham being our favorite of the current superhero shows. My wife has said a couple of times that it’s her favorite show, but I think The Expanse recently took over those honors for her (I haven’t yet done a re-ranking to place The Expanse, though it would certainly be in my top 10).

For me, it’s the only superhero show in my top 10, depending on what you consider iZombie, which I adore and which comes in at number 2 behind Game of Thrones.

The second season has been good too, and I’m happy to see Mr. Freeze being introduced in the next upcoming episode. (I consider his first season story in Batman: The Animated Series to be the best single episode of any superhero series ever. A haunting tragedy which can still give me goosebumps just thinking about Mr. Freeze’s voice in that episode.)

And I’ve been a Donal Logue fan since his days as Jimmy the Cabdriver in MTV spots. If you haven’t watched the 13 episodes of the single season of Terries—not at all a genre program but exceptional nonetheless—do yourself a favor and track them down.

My wife and I love Gotham. I don’t know if it’s my favorite show at the moment, but it’s definitely in the top 3 – along with The Walking Dead and House of Cards.

My wife is heavy into the Marvel universe, so it goes against her nature to get into something D.C. But she says the story is just too good.

I love the grit, the characters, and the development of a criminal world that warrants the arrival of Batman.

And the acting is outstanding. How did they draw such talent?

> As I mentioned in the comments to the Supergirl post, my wife and I are with
> you as far as Gotham being our favorite of the current superhero shows.

I’m just glad I listened to all the praise being heaped on this show and checked it out. Usually I ignore it. 🙂

> The second season has been good too, and I’m happy to see Mr. Freeze being introduced in the next upcoming episode.

Glad to hear it! I’ll probably wait until the entire Second Season is available on Netflix before I start it. But I’m very pleased they’re expanding the pantheon of villains.

> I consider his first season story in Batman: The Animated Series to be the
> best single episode of any superhero series ever.

You’ll have to job my memory… although I do remember the 2002 animated film Batman and Mr. Feeeze: Subzero, which I thought was excellent.

> My wife and I love Gotham. I don’t know if it’s my favorite show at the moment,
> but it’s definitely in the top 3 – along with The Walking Dead and House of Cards.

> I love the grit, the characters, and the development of a criminal world that warrants the arrival of Batman.