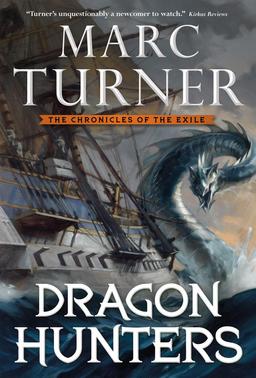 My epic fantasy debut, When the Heavens Fall, came out in May this year, and it can best be summed up as The Lord of the Rings meets World War Z. It’s not a zombie apocalypse novel, but that’s going to come as scant consolation to the characters who find themselves having to wade through an army of undead.

Sounds plenty intriguing to me. The second book in the series, Dragon Hunters, has been much anticipated in these parts, and it finally arrived earlier this month. Here’s the description.

Once a year on Dragon Day the fabled Dragon Gate is raised to let a sea dragon pass from the Southern Wastes into the Sabian Sea. There, it will be hunted by the Storm Lords, a fellowship of powerful water-mages who rule an empire called the Storm Isles. Alas, this year someone forgot to tell the dragon which is the hunter and which the hunted.

Emira Imerle Polivar is coming to the end of her tenure as leader of the Storm Lords. She has no intention of standing down graciously. She instructs an order of priests called the Chameleons to infiltrate a citadel housing the mechanism that controls the Dragon Gate to prevent the gate from being lowered after it has been raised on Dragon Day. Imerle hopes the dozens of dragons thus unleashed on the Sabian Sea will eliminate her rivals while she launches an attack on the Storm Lord capital, Olaire, to secure her grip on power.

But Imerle is not the only one intent on destroying the Storm Lord dynasty. As the Storm Lords assemble in Olaire in answer to a mysterious summons, they become the targets of assassins working for an unknown enemy. When Imerle initiates her coup, that enemy makes use of the chaos created to show its hand.

Dragon Hunters is the second novel in The Chronicle of the Exile; we covered the first volume here. It was published by Tor Books on February 9, 2016. It is 493 pages, priced at $29.99 in hardcover and $14.99 for the digital version. The cover is by Greg Manchess.