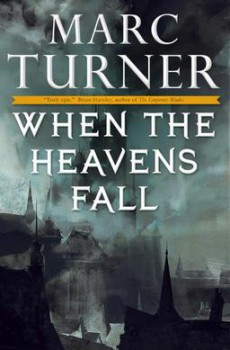 My epic fantasy debut, When the Heavens Fall, came out in May this year, and it can best be summed up as “The Lord of the Rings meets World War Z.” It’s not a zombie apocalypse novel, but that’s going to come as scant consolation to the characters who find themselves having to wade through an army of undead.

In a recent interview I was asked if I had a plan to survive a zombie apocalypse. Unsurprisingly, it’s not something I spend too much time thinking about. With Christmas approaching, though, what better way to get into the festive spirit than contemplating the end of the world, and all the reasons why we wouldn’t stand a chance of surviving it?

Here, then, are five (futile) tactics for surviving the zombie apocalypse.

If you live in a city, the first thing you’re going to want to do is leave. No matter what the cause of “zombieism” is, the infection is always transmissible, which means the friend standing beside you could soon be wondering how you taste with ketchup. There’s no such thing as safety in numbers when the numbers can so easily turn against you.

But how do you leave? By car? Only if your vehicle can fly over all the other cars clogging the streets. By train? If you think public transport is unreliable now, how do you imagine the apocalypse is going to improve punctuality?

If worse comes to worst, though, you can always outrun the undead, right? In most films and computer games, zombies totter around with arms outstretched like drunkards looking for the light switch. But why does it have to be that way? Why shouldn’t the undead be able to run as fast as the living? That’s how it is in the World War Z film. And since zombies are dead, I’m guessing they’re not going to tire as quickly as you or I do.

To survive against the zombie horde, you’re going to need a gun. Maybe if you live in the US you’ll be able to get your hands on one, but when was the last time you had to fire it at someone intent on turning you into a zombie happy meal? Not recently, I’m hoping.

Plus how do you kill an enemy that is already dead? Most of the wounds that would stop a living opponent won’t trouble a zombie. In When the Heavens Fall, one of my characters, Luker, discovers this to his annoyance when an opponent with half her face missing rises up and attacks him again:

“These bastards weren’t playing fair. You took a sword in the face, you went down and stayed down. Seemed like there should be a rule about that somewhere.”

To be sure of incapacitating the zombie charging at you, you’re going to need to hit the head or a sensitive area like the knee. Take your time lining up the shot, though. It’s not as if there are a hundred other zombies ready to replace the one that falls…

If running or fighting won’t save you, your best option is to hide. Close your curtains. Put a “Do Not Disturb” sign up on your front door. You could even get some popcorn in and watch a zombie film to pass the time – I’m sure the undead would appreciate the irony. And by the time the movie is over, the zombies will have moved on, right?

Unfortunately, the zombies’ list of things to do today doesn’t extend much past eating you. If you keep your head down for a week, they’re not going to get bored and go home. On the contrary, their numbers will grow as the infection spreads. And all the time, your own meagre supplies will be dwindling.

It’s not just the food and water that will run out, either – it’s the electricity, as well. When the power goes, how are you going to stay warm or cook food? Soon you might discover that your supposed hiding place is in fact a prison. And it’s a prison patrolled by zombie guards, too.

There’s an amusing scene in the film The Mummy where John Hannah’s character finds himself alone and without weapons in the path of a zombie horde. His solution? He puts on his best zombie expression, and lurches around mumbling “Imhotep” (the bad guy’s name) until the enemies have gone.

There may be other ways to trick your way past the undead – like throwing a piece of meat to distract them, or smearing yourself in gore to hide your smell. If it doesn’t work, though, what’s your next step? You can’t just share a chuckle with the zombies, then retreat to your hideout to think of a plan B. By now, you’re out in the open with the undead.

Still, it could be worse. You could always try running or fighting.

Find Someone Else to Tag Along With

If you don’t have the skills to survive the zombie apocalypse, it’s a good idea to look for someone who does. Maybe you’re lucky enough to live next to Bruce Wayne. If so, invite yourself round to his house, find a comfortable spot in his shadow, and enjoy the rest of the show from there.

Unfortunately, the end of the world is not the best time to be making new friends. When resources are limited, it’s every man for himself. People struggling to escape the zombie hordes aren’t going to want to slow themselves down with extra baggage – which is exactly what you will be if you don’t have skills to contribute. And by skills, I mean useful skills. Your ability to speak Klingon might have amazed your friends once, but it’s going to have limited application during the apocalypse.

In summary, when the undead army descends on you, you’re not going to be inundated with options. You can’t run, hide or fight, and the person you ask for help is as likely to kill you for your coat as offer the hand of friendship.

Or, to put it another way, you’re all going to die. Horribly.

Marc Turner was born in Canada, but grew up in England. His first novel, When the Heavens Fall, is published by Tor in the US and Titan in the UK. You can see a video trailer for the book here and read, or listen to, a short story set in the world of the novel here. Marc can be found on Twitter at @MarcJTurner and at his website.